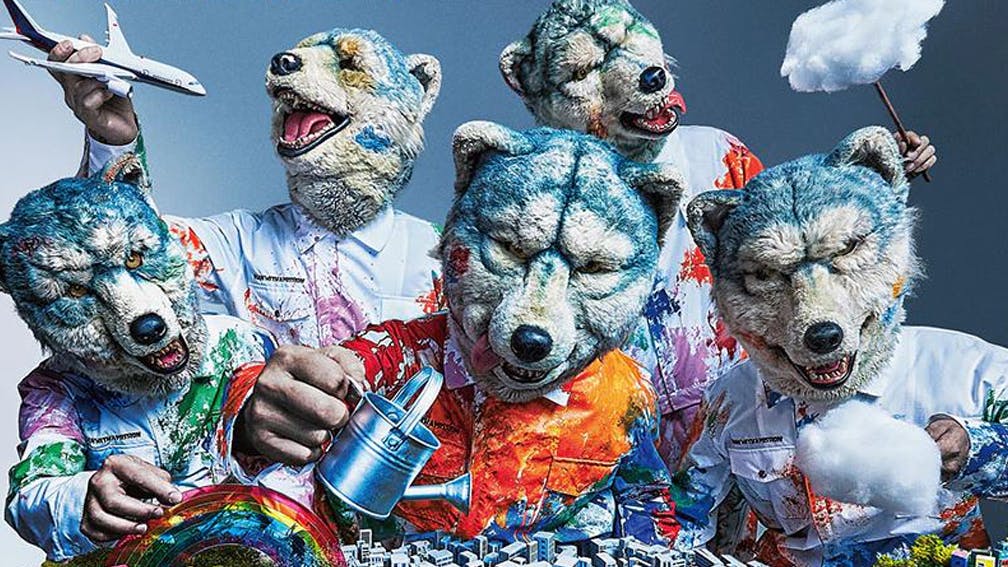 When Break And Cross The Walls I was released in November 2020, dedicated to world unity and crammed with high-energy bangers – from an electro-rock rework of AC/DC’s Thunderstruck to delirious original composition Merry-Go-Round – it didn’t exactly feel like the ‘dark’ side of an epic double album. Arriving on the brink of summer, however, volume II unequivocally proves that was the case. With some inspired artwork unsubtly proving the point, no longer are enigmatic wolf-men MAN WITH A MISSION playing chess in some monochrome bunker; they’re back to wreak colourful havoc in the great wide open.

Rather than trying to boil down the masterful blend of crunching guitars and massive pop hooks, emotional idiosyncrasies and retro-futurist influence in these 14 songs, perhaps it’s better to pinpoint them by where they fit into the weave of broader Japanese culture.

Full-throttle opener Tonight, Tonight (unrelated to the similarly-titled Smashing Pumpkins classic) was selected as the theme song for X Games Chiba 2022 – the first time the extreme sports tournament has been held in the land of the rising sun. The heart-swelling More Than Words (unrelated to the similarly-titled Extreme cheese-fest) is a pulsating ballad that deftly juxtaposes Japanese and English language, and was the main theme to big screen medical mystery Radiation House: The Movie. Meanwhile, synth-streaked rave-rap-rock highlight All You Need features in mobile video game A.I.M. $ -All You Need Is Money, while chest-thumping centrepiece Blaze blares over the opening titles of mech-tastic TV anime Mobile Suit Gundam: Iron-Blooded Orphans Special Edition.

Ultimately, listeners’ appetite for this album – as, in fairness, for most of MAN WITH A MISSION’s exuberantly OTT offerings – can probably be judged pretty well by their threshold for the ripe melodrama and manic energy of Japan’s pulpiest pop-cultural output. Right up to the final breakneck segue from swaggering dance-rock anthem Dark Crow into the soft-pressed keys and delicate whistles of folky closer Chisakimonotachi, it’s a record that rides the line between the ridiculous and the sublime. Check your cynicism at the door, though, and you’re in for an absurdly good time.

For fans of: Fall Out Boy, ONE OK ROCK, Linkin Park

Man With A Mission

Album Of The Week: MAN WITH A MISSION's Chasing The Horizon

MAN WITH A MISSION: "Artificial Intelligence May Take Over The World by 2045"

Japan's furriest band talk ditching the computers, experimenting in rock, and being half-wolf…