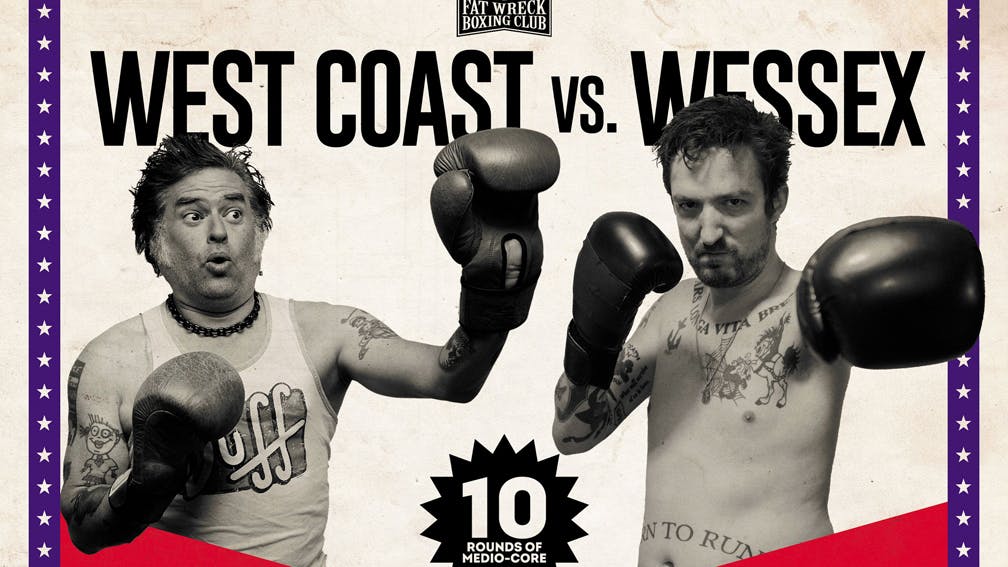 Even for a man as verbose and clever with lyrics as Fat Mike, it’s highly unlikely that ‘Wessex’ enters the NOFX mainman’s lexicon with any kind of regularity. But here’s a split record of lots of things that you wouldn’t have expected to come across anyway. Who’d have thunk that at some point the paths of NOFX and their good friend, Winchester’s finest, Frank Turner, would cross to the degree that they’ve done a load of covers of one another’s songs, in their own respective styles? But look closer, and the crossover is far more logical than one might at first think from one side who are one of the finest-ever exponents of bratty American punk rock, and another who plies his trade with an acoustic guitar.

For one thing, one of Frank’s tunes tackled by Fat Mike and co. here, Thatcher Fucked The Kids, not only echoes in its title NOFX’s Fuck The Kids, but also the line, ‘We’re all scared of the kids in our neighbourhood’, a similar sentiment to their old-man-yells-at-cloud observations in What’s The Matter With Kids Today?, from 1996’s Heavy Petting Zoo. For another, both artists boil down to a similar stripe of sneery, sassy lyrics with an enthusiasm and defiance of people who know they’re right, and who also go about their musical business with a wider palette than they’re sometimes given credit for, which they add to their chosen songs superbly. That Fat Mike, a nasal man from California who often goes on about S&M and by his own admission 'Sing(s) kind of flat' can perform songs by an Eton-educated Hampshire man with a nice accent simply adds to how easily the two worlds slide into one another.

Thus, NOFX’s take on Frank’s tracks turn them into turbo-charged So-Cal workouts without really having to do too much to them beyond playing them really fast. Frank’s contributions, meanwhile, see him doing a raucous version of Bob and Perfect Government in his own charming manner, while his take on reggae number Eat The Meek is smart and sharp. It’s a bit of good fun, but it also highlights just how strong both contributors’ individual voice is, that they can take such initially odd seeming song choices and make them their own, with snot and class in equal measure.

West Coast Vs. Wessex is out now via Fat Wreck Chords.