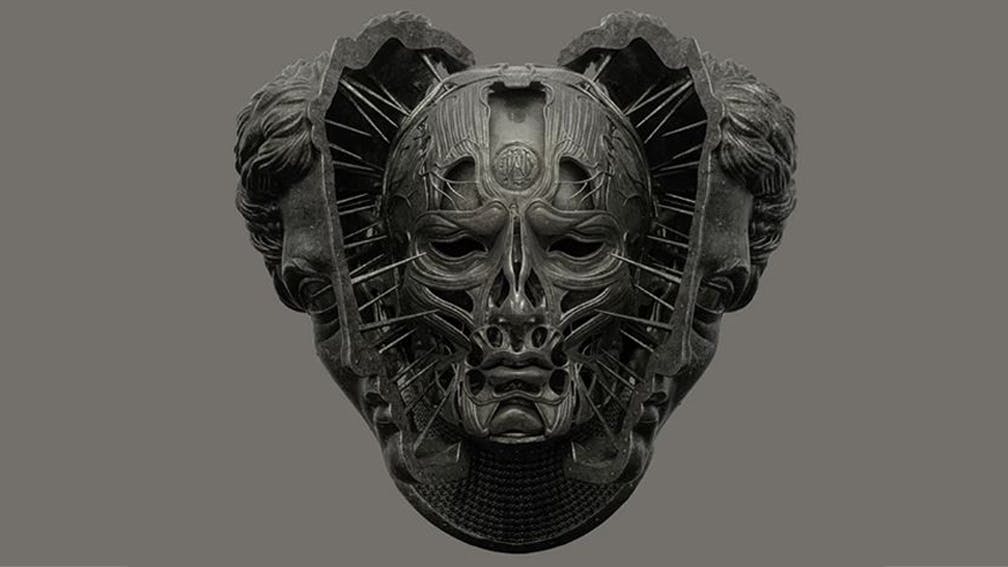 Since Parkway Drive stunned the metal world in 2015 with their mid-career renaissance Ire, the Aussie heavyweights have been on a journey of evolution and expansion, with 2018 follow-up Reverence taking their bruising metalcore into more emotional and experimental realms. Now, on their seventh full-length outing, the Byron Bay brutes have taken yet another small step toward their final form, and one giant leap into the abyss.

As the title suggests, darkness bubbles and oozes throughout the record like a putrid pus. Speaking to Kerrang! this summer, frontman Winston McCall says the overarching theme of Darker Still is one of “a person reaching a point in their life where they’re confronted with an event that tears down and destroys everything about them in terms of their perception of self, where they stand in the world, their beliefs, everything… And then you have to walk through this journey, through the darkness to rediscover who you are, and where you stand in the world.”

It’s clear from the off that he’s not talking about a nervous walk down a shady alleyway with your keys in your hand, but wading through pitch-black tar, reckoning with the unbearable nightmare of being. Rather than wallowing in the misery however, it’s an eleven-track tale of resilience, an uprising, and standing tall in the face of all that life can throw at you.

Opening with a twinkle and a fragile, exposed Winston on Ground Zero, it swiftly changes gear to one of defiance, as the frontman urges his band to ‘drop the beat’ and a bouncing, anthemic melee ensues, replete with fist-pumping riffs and a joyous, swashbuckling chorus. Throw in a breakdown for the mosh goblins and a side order of swooping ‘whoooas’ and it’s difficult to imagine Parkway sounding bigger than they do here.

Diving straight into the circle pit fodder of Like Napalm (which is destined for a new fiery onstage set-piece), buoyed by a bellow-along chorus and chugging chaos, every single cylinder is firing at dangerous levels. And when single Glitch speeds into view, exploring experiences of insomnia and depression, gilded with jaunty guitar lines and While She Sleeps-esque gang vocals, this is Parkway at their peak.

The Greatest Fear, however, takes things in a different direction, introducing organs and an almost angelic mood, before the galloping Iron Maiden riffs swoop in and an almost Rob Zombie-ish groove to the verses, as we hear about the ‘hymns of nevermore’ and replace pulpits with mosh-pits. Yet the purest example of Parkway’s drive to reinvent themselves is the title-track and album centrepiece, an almost-seven-minute ballad built on foundations of acoustic guitars and whistling, while Winston channels his inner Nick Cave. Neither track hits quite as hard as you hope, but Darker Still’s eerie textures adds more depth to the album than any metalcore track ever could.

To that point, Imperial Heretic, feels a bit by-numbers by comparison, and the outlier as the least-inspired track on the record. Soul Bleach gets things back to business with rapid-fire riffs and neck-snapping pace, similar to modern-era Slipknot in its delivery, as Winston gets wilfully more aggressive and murdery, and Land Of The Lost’s ‘Keep diggin’ the hole down deeper’ hook is among the most infectious on the entire LP.

Closing on headbanger’s dream From The Heart Of Darkness, with its tribal, battle-ready intro to the grunting guitars and its snarling ‘I took a walk last night through the valley of death’, the pounding heaviness is a distillation of the rebellion and resistance coursing through Darker Still’s veins. Parkway went through hell making this record and they’ve got the scars to prove it, but they made it out alive to continue their rocket-powered trajectory. These songs of strength survival aren’t platitudes, they’re promises.

For fans of: While She Sleeps, Architects, Bury Tomorrow

Darker Still is released on September 9 via Epitaph