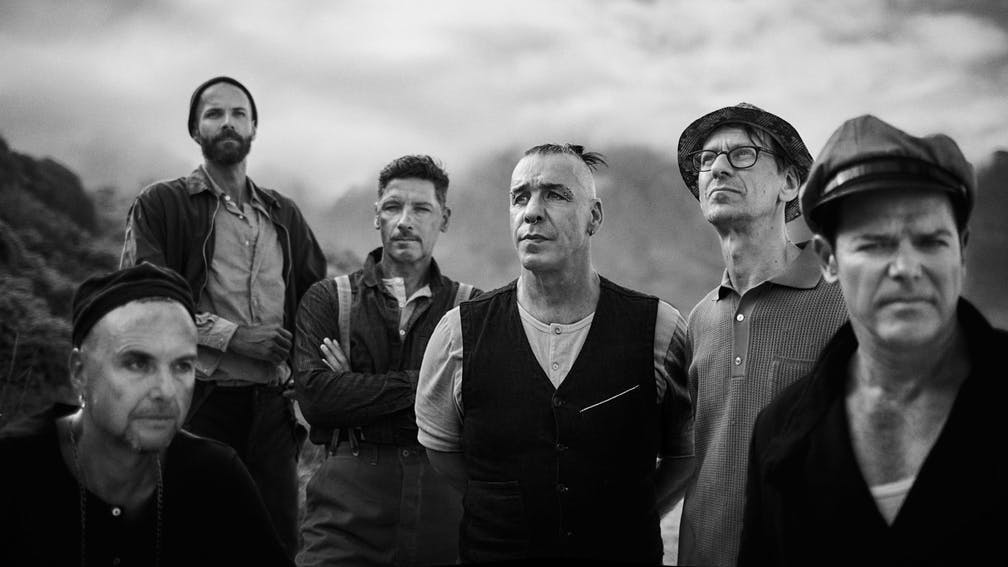 In a world in which we are expected to run to keep up, where a constant digital presence must be maintained at all times, lest one lag for a second and lose whatever gains may have been made, Rammstein’s attack strategy for their new album is both steadily reassuring and highly amusing. To mark the release of their first album in a decade, they are doing no interviews, they have explained nothing about what to expect, or said what any of it means. There’s not even a title. But then, when the video for Deutschland – the starting cannon for the band’s seventh chapter – arrived with two days’ vague warning, it racked up 20 million views in four days. It speaks not just of Rammstein’s enormity but, more importantly, of their sense of intrigue and magnetic ability to impress with what you’re being subject to, rather than a desire to be liked. The way it perfectly balanced a 10-minute video that delivered a hyper-real and by turns triumphant, dark, tongue-in-cheek and grotesque history of Germany with a chorus that boils the very essence of Rammstein down to the two powerful syllables of their homeland’s name, said much. Namely, that with Rammstein, it’s not all excess all the time, but finding the exact, perfect tool with which to get the job done with the touch of the master craftsman, the true artist, the genuine expert.

Across Rammstein's new album, whether on the explosive Tattoo, in the acoustic threat that lurks in Diamant, or the punchy, electronic Weit Weg, this quality is writ large. The spine and muscles are recognisably familiar – choppy, mechanical riffs, drums like an atomic clock, Till Lindemann’s authoritative Teutonic bark that remains both cold and dripping with menace, with only the slightest flicker of difference creating a gulf of inference between the two – but it is in the subtle intelligence and wit of the album’s brain that the character of Rammstein’s creation takes shape. Was Ich Liebe, for example, starts in similar fashion to Nine Inch Nails’ Closer, before adding a wash of something not a million miles from The Beatles at their darkest. Hallomann, meanwhile, struts along on a switchblade groove and pornographic keyboard line, dripping in sleaze while also maintaining the icy, clinical superiority of a dominatrix. Throughout, Flake Lorenz’s synths are more up front than before. And when it comes to ‘how has this not happened yet?’ moments, there is a song simply called Sex – how has that not happened yet?

As ever, the enigmatic face of this unknowable band is only blurred further by the German lyrics. But a delve beneath the surface finds Till singing of escaping into music (Radio), enthusiastic rumpo around the globe (Auslander), and doing awful things to a doll (Puppe). Even with the benefit of translating the words, however, one is still very much in the dark as to what he is actually singing about, but this matters not: what it brings to the songs is a veneer of not-quite-seen menace which only amplifies the allure.

In truth, after 10 years Rammstein could have released anything and it would sell, or at the very least make enough noise to keep them in the spotlight. It speaks not only to their integrity but also to the mastery of their art that, from its forehead-slappingly simple cover to its most OTT moments that will scorch the skies live, this is a record made with care, craft, and nothing allowed in that isn’t just-so. It may seem an odd thing to praise a band as flamboyant as this for, but Rammstein know the value of quality rather than quantity. When they deliver, they still deliver the best. And rather than a constant feed of shite, isn’t that worth waiting for?

Oh, you’re into Rammstein? You get we’ve got a ton of stuff about Rammstein right?