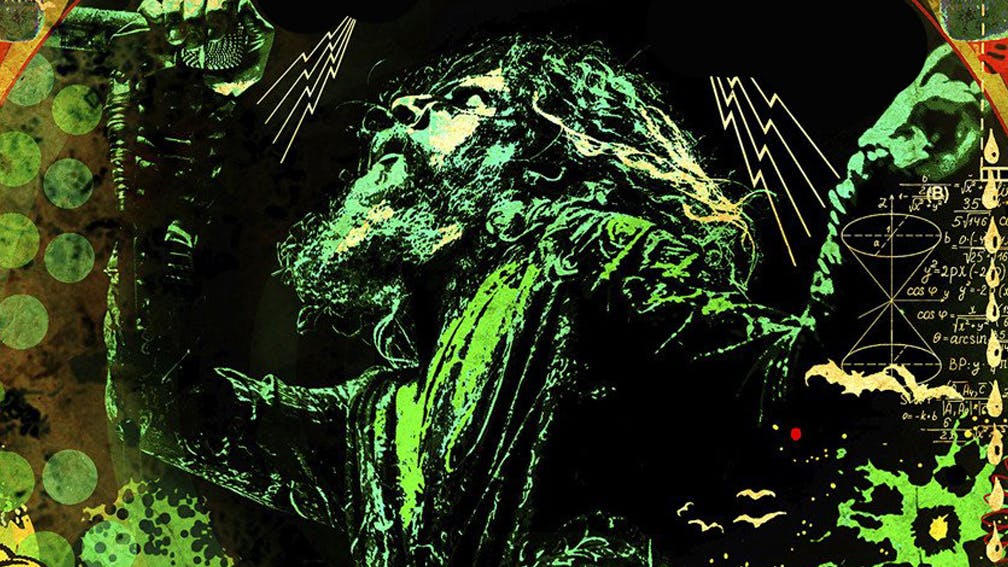 Robert Bartleh Cummings is prone to big statements. Whether it’s changing his name to Rob Zombie, playing festivals across the world looking like he’s just crawled out of the earth backstage, or directing some of the most distinctive and gruesome horror films of the past 20 years, he knows how to grab the attention. Even armed with this knowledge, though, there were more than a few raised eyebrows when, 36 years into his career, Mr. Zombie declared his latest album, The Lunar Injection Kool Aid Eclipse Conspiracy, to be the best he’s put his sinister name to. It’s not so much that this piece of Hellbilly hyperbole is difficult to believe, it’s more a question of what exactly sets a Rob Zombie album apart another these days.

In this case, first and foremost, it’s the distance between releases. This one comes five years on from The Electric Warlock Acid Witch Satanic Orgy Celebration Dispenser, which is two years longer than the gap separating that album from 2013’s Venomous Rat Regeneration Vendor. If there’s a relationship between this trio of releases, aside from their verbose, unwieldy titles, it’s that they’ve chronicled a gradual abandoning of more ‘traditional’ song structures in favour of sonic soups crammed ever more fully with his trademark preoccupations of monsters, mayhem, UFOs, and the dark and foreboding underbelly of Americana, while being laced with as many genres as you can shake a vampire-shaped mic stand at. The result is the equivalent of haphazardly scanning the radio bands in Hell.

There’s a reason The Triumph Of King Freak (A Crypt Of Preservation And Superstition) and The Eternal Struggles Of The Howling Man were chosen as singles, given how their turbocharged drive recalls Zombie’s more successful moments, but they’re the obvious draws in an amusement park of an album full of weirder and more wonderful attractions, such as 18th Century Cannibals, Excitable Morlocks And A One-Way Ticket On The Ghost Train, which welds bluegrass toe-tapper to industrial face-melter with joyous results. And that’s what sets The Lunar Injection… apart from its predecessors: a greater sense of fun and abandon. In the absence of those unforgettable live shows, it vividly conjures the big, brash crescendos, the neon lights and pyro blasts, and let’s not forget the propensity for hip-shaking, accommodated here by the tambourine-toting Shadow Of The Cemetery Man.

To criticise a Rob Zombie album is to stick to a formula as closely as the man himself, given his flaws remain the same. This is a man who can’t necessarily be judged by the same standards as other musicians, though. Who else but he could intone ‘Boom-boom-boom, the witch is in the room / Boom-boom-boom, she’s sliding up the broom’ (Boom-Boom-Boom) and make it sound like the coolest thing ever? That being said, The Lunar Injection… is too long and could easily be trimmed of material most diplomatically described as ‘non-essential’, particularly the little instrumentals/sample-laden wig outs between tracks. The rub is, of course, that these short sonic mood boards are often the bits where Zombie tries something new.

These moments of excess are part of the bigger picture, though, because as you’d expect from a man who’s made a lot of albums and almost as many movies, Zombie knows how to capture and hold an audience — to lift them up, toss them in the back of a fire-belching hot rod and tear off down the highway. While you know what to expect, the experience is rarely less than thrilling.

Read this: 12 of the most uplifting songs about Satan