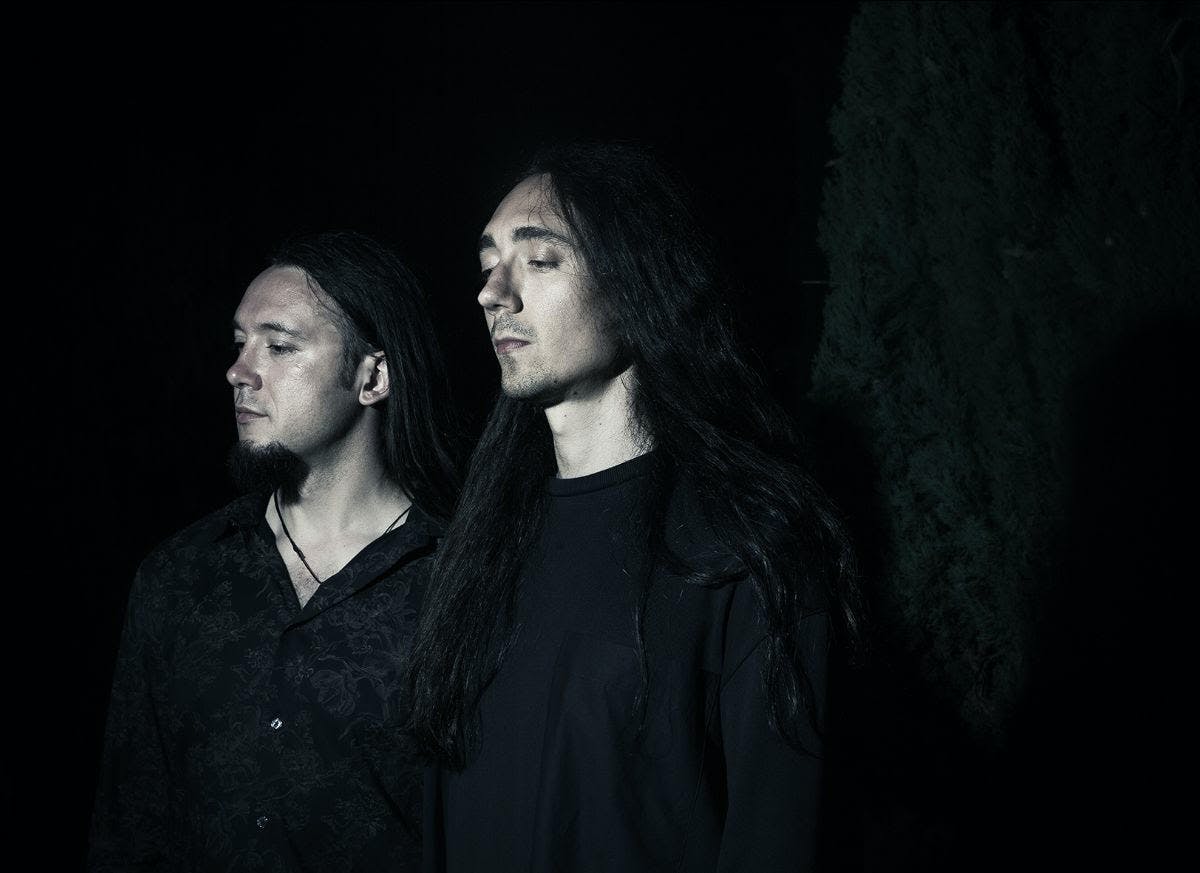 For nearly fifteen years, French duo Alcest (percussionist Winterhalter and songwriter/vocalist/multi-instrumentalist Neige) have had one of the most distinctive sounds in modern metal. They helped pioneer the blackgaze subgenre, which fuses brutal black metal trappings and beautiful shoegaze transcendence. The following they've established over the course of their career comes most notably from the how well they combine hellish and heavenly sonic elements with unmatched fluidity, impact, and confidence.

This month, their sixth LP Spiritual Instinct will arrive via Nuclear Blast. To celebrate this new chapter in the band's saga, we reached out to Neige for a retrospective take on the Alcest tunes he feels move him the deepest, to both beautiful and crushing places. Ranging from their humbling beginnings with 2005’s debut EP Le Secret all the way to that upcoming opus, here are Neige’s picks for the band's 10 most emotionally ravaging tracks.

“This is the very first song I wrote for Alcest (I am not taking into account our first black metal demo). Because of that, it has a very special place in my heart, of course. In that moment -- around 2002 -- I decided to use music as an outlet to deal with a spiritual experience that happened to me as a child, and use this as the main inspiration for the project (as most of our fans know). Alcest was born and Le Secret was the first song I wrote about the spiritual world.

"I basically just tried to recreate the feeling of this place I could see in visions; musically, I wanted to paint it and recreate its atmosphere of indescribable serenity, mystery, and bliss. Le Secret sounds very pure and enigmatic to me, in its unconventional melodies, structure, and clean vocals over walls of distorted guitars. I was about 17 when I wrote it, and even if I was much less experienced as a songwriter, it’s funny to see how my vision of the project didn’t change much over the years.”

“Les Iris might be one the first Alcest ‘favorites’ that we would always play live during our early touring years. I think if there were only a few songs to represent Alcest, this would be one of them. It’s a pretty simple track in terms of riffing and structure, but with this one, I feel I really managed to convey what I had in mind and what Alcest was supposed to evoke.

"Les Iris combines both our epic and uplifting sides with the verses contrasting with blast beat choruses. The clean vocals during that chorus almost sound like elvish chants, and then the last part of the song is just very nostalgic and intense. I just wish the production on that album -- which was recorded all by myself in my parents’ basement! -- was a bit better in order to do justice to the song, but I know that some people are attached to it as it is.”

“Souvenirs D'un Autre Monde is the title track of our first album. It’s a 3/4 slowed paced song, with a type of rhythm that inspired several other tracks I wrote later on in our career (for example, Autre Temps). This is one of the most melancholic and vulnerable songs I‘ve ever written. In the lyrics, I am just telling that I came from a far away place, where time just doesn’t exist and where things are more beautiful than anything down here on Earth. You can hear in that song that I terribly miss this ‘other world,’ which I consider to be my real ‘home,’ as strange as it may sound. Therefore, there is a lot of longing and nostalgia in its melodies.”

“I wrote Percées de Lumière during the first year I moved to Paris, and that was a kind of transitional, darker period for me. It was originally for another project I had -- Amesoeurs, which split-up the same year (we were mixing black metal with dark wave/post-punk) -- and you actually can hear that in the main riff, which almost sounds like something from early U2. I think I tried to use clean vocals on Percées de Lumière at first, but this sounded way too ‘nice’ and ‘pop.’

"Even if the song had a standard rock rhythm, I chose to use screaming vocals, and that was unexpected but great in the end. This is a massive live song, and probably the one we played the most. It feels very strange when we don’t have it in the setlist. Maybe people have heard it too many times? Well, if so, please tell us!”

READ THIS: The Underground Sounds Of America: Pinkish Black

“Sur L’Océan Couleur de Fer is from our second album, Écailles de Lune. The original plan for this album was to have the two songs on our 2005 EP, Le Secret, re-recorded at the end of the album (right after the interlude, Abysses). It sounds really strange when I think about it now; how could this have been a good idea? Obviously, we realized that it wasn’t working at all.

"The mood of the first tracks from Écailles de Lune and Le Secret were totally different, so I had to urgently write a song to replace these two. This song became Sur L’Océan Couleur de Der, which has since become one of my Alcest favorites. I remember writing it in a couple of hours in the attic of my apartment, and I knew that its calm, aquatic, and sorrowful feeling would fit with the rest of the tracks since they were also in that style. It was simply a great way to end the album.”

“Autre Temps is another Alcest ‘classic’ that we always play live, along with Percées de Lumière. It basically has a pop structure: intro-verse-chorus-verse-bridge-chorus. I found the main riffs of the track many years before starting the composition of the proper album -- Les Voyages de l'Âme -- but I just couldn’t find a way to finish the song and be happy with it. So, I kept it on the side for a while.

"It’s funny how sometimes the shortest and most simple tracks can be the most difficult to complete. This song is very Alcestish: ethereal, epic and pure at the same time, with a certain Celtic/elvish vibe to it. Autre Temps has this melody of four notes in the chorus (the vocal part) that is a melody that keeps on coming back in Alcest’s music. I don’t know why I repeatedly want to use it; for me, I guess it evokes something ancient, like it’s from another time or another world.”

“Là Où Naissent Les Couleurs Nouvelles could be a summary of the whole Alcest sound and emotional spectrum in the sense that it’s very long and complex, with several sections that are different from each other. People often say that Alcest is somehow prog, and I can understand why with a song like this. I think Là Où Naissent Les Couleurs Nouvelles is one of my live favorites; it’s powerful and fun to play, and I think the rest of the band would agree with me on that one.”

“Délivrance is the last track of Shelter, our shoegaze/dream pop album. Curiously, it’s the one that sticks out because it’s much longer and very cinematic, as opposed to the pop structures of the other songs. It’s basically built upon two parts: the first is a quiet Alcest-ish ambient verse, with improvised vocals and then a big melody/wall of sound that builds up and repeats forever. At the end, there is just the string quartet left, repeating the melody for some minutes before finally stopping. This melody is, at least to me, one of the most moving ones I’ve written I can often see people cry in the audience when we play it. Until now, it’s been the very last one in our set.”

“Kodama, the title track of our fifth album, took its inspiration from my love for Japan and the several visits/tours we’ve done over there with the band. Just like the rest of the record, it is also an homage to the movie Princess Mononoke from Hayao Miyazaki, with the whole concept about the fight between nature and the human world. It’s something that we all can relate to, especially with the ecologic problematics we are facing these days.

"I almost consider myself as having two cultural backgrounds: my French one and a Japanese one that I got growing up watching anime, reading lots of manga, and playing Japanese video games. It has really built me as a person and participated a lot into making me who I am today. I am so grateful for that, and I wanted Kodama to have something Japanese in the melodies, like this sweet nostalgia and fragility that you can sense floating in the air when you are in Japan. It’s a very peculiar feeling, but I am sure that people who have been there will see what I mean. I kept this Japanese style quite discreet, as I really didn’t want to sound corny or fake (which can be the case when you try to replicate a musical touch from another country).”

READ THIS: This Japanese apple monster is a pretty sick metal drummer

“This is the first track I wrote for our new album, Spiritual Instinct, after having been touring for a long time with Kodama and feeling pretty exhausted physically and mentally. I think I had lost contact with myself at that point and felt pretty down; that’s something that you can hear in the music. It’s one of the most angry and cathartic songs that I’ve written in the recent years.

"Usually, I try not to include too much of my personal struggles into Alcest’s music, but in that moment, expressing these emotions was a need. That’s the feeling you also get from the beautiful video clip that Craig Murray made for the song. I can relate so much to the inner fight that the character is expressing in her dance. This internal conflict between her human anguishes and the acceptance of her ‘demons,’ as opposed to her more elevated, spiritual, and non-human side.”

Alcest's new album, Spiritual Instinct, comes out October 25 via Nuclear Blast, and is available for preorder.

Make sure to catch the band live with Birds In Row and Kælen Mikla at one of the following dates: