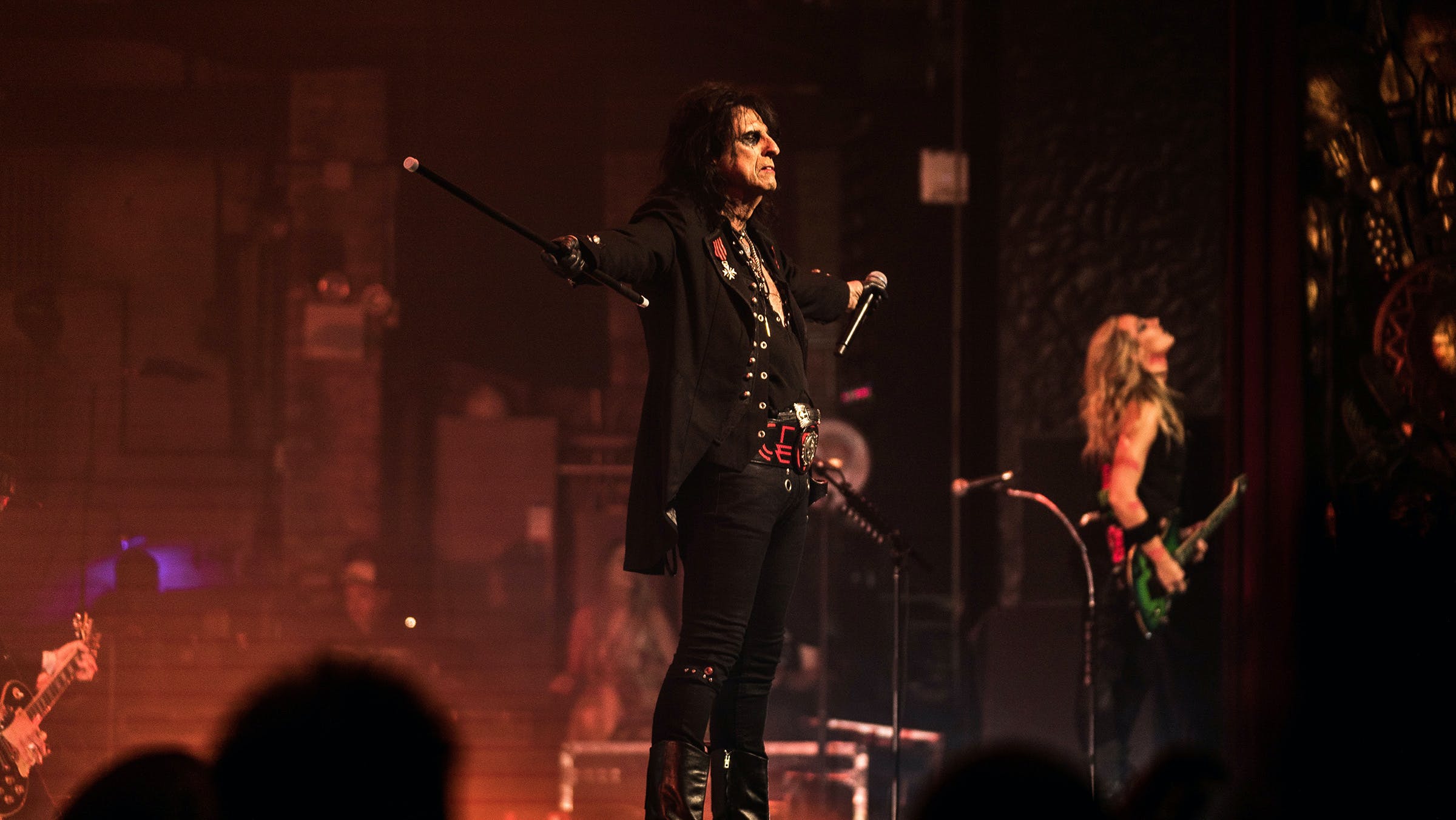 The Beacon Theatre isn’t very metal. Located in Manhattan’s Upper West Side – a once-funky neighborhood that’s now an overpriced playground for young professionals – the theater’s giant digital marquee and old-timey box office seem designed to attract people in Brioni, not bullet belts. The interior is choked with baroque 1920’s-style embellishments, down to the gilded depictions of Greek gods that adorn the columns on either side of the stage.

But this sense of antique overkill makes the Beacon oddly appropriate for tonight’s show. The venue is diehard in its theatricality – so staged, that it’s real. Just like Alice Cooper.

For some, Alice Cooper might seem like old hat. His brand of transvestite downer rock isn’t all that alarming compared to any pornogrind T-shirt, and his haunted house live show is tame next to the gutted livestock and burning crosses found at your average black metal concert. And yet, while those genres are constantly fighting for legitimacy on the grounds of being truly dangerous, Alice Cooper has thrived for over five decades on playing the role of a maniac. While many of his peers have called it quits or toned things down, the King of Shock, now seventy years old, continues to crank out albums, tour the world, and cut his own head off several nights a week.

“I think it’s now become a tradition,” says Alice over the phone a few weeks before his show at the Beacon. “I think Alice Cooper was at one time forbidden fruit, and now I’m a household name. But I’ve never let up on the intensity of the character of Alice Cooper, or the music. The great thing about playing Alice is that Alice is always trying to prove something.”

It’s refreshing to hear Alice (née Vincent Damon Furnier) acknowledge himself as a character. He has none of the unaware earnestness and preciousness many older rock stars display during an interview – he knows this is a show; one in which he’s excited to take part. Similarly, when discussing A Paranormal Evening At The Olympia Paris, the live album he’s promoting, he’s quick to note what we’re all secretly thinking: “I’m extremely critical of live albums. When I hear a band live, I don’t mind the mistakes, but on an album you hear all of them them. This time around, we didn’t have to correct one thing.”

Like any good actor, he’s also quick to laud the people who make it all possible. Alice's backing has always been a shifting collection of all-star musicians, but this time around, he wants everyone know that he’s found what he considers to be the perfect line-up. “It’s the personality of this band,” he gushes. “They’re so talented. Everybody is best friends. You never hear any yelling, screaming, criticizing. It’s all laughing backstage. Egos are always a problem in any band, and if you are talented, it comes with ego. You have to have ego to be a rock star. But it’s like because everyone knows how good they are, they don’t need to talk about how good they are.”

The result is an excellent live album – and, Alice promises, an amazing performance. His promise is the same as its been for the past fuck-knows-how-many years: anyone coming out to catch him live this fall is in for a blast. “I’ll put this band and this show up against anybody, just in term of quality and level of entertainment,” he says. “Now, Alice is seventy, and the audiences think, ‘Ah, I’ll come to the show, and they’ll walk through a few songs.’ What they get is anything but that.”

But as I shuffle into the Beacon, the extreme headbanger in me bristles. Shirts cost forty bucks, a beer costs ten. An usher leads me to a cushioned theater seat. Everyone here looks like they’re over thirty, except for the little girl in front of me in attendance with her dad. I‘m a fan of Alice’s music – even the weirder classic rock stuff – and had the pleasure of seeing him play Roseland Ballroom on Halloween night when I was 15. But that was at a booze-soaked rock venue, and since then I’ve been to a million mind-blowing shows that involved little more than three dudes from Baltimore in a cramped sweatbox. This better be some performance…

A few minutes later, the lights go down, an eerie noise fills the room, and BOOM – in a flash of pyrotechnics, there’s Alice and co., performing the title-track from 2000’s Brutal Planet. The band, all dressed like vampire biker carnies, throttles the crowd with base-heavy jock jam monster rock and gang-vocal support on the choruses. At the center of it all is Alice fucking Cooper: hip bouncing to the beat, eyes painted black, mouth curled into a haughty sneer. The crowd goes absolutely apeshit, roaring with approval and stretching out their hands towards the stage. The excitement is tangible -- like we’re all standing in the presence of some emperor, dark god, or combination of the two.

Over the next ninety minutes, the Beacon experiences something missing in much of modern metal: a real show. It’s impossible to keep your eyes off the stage as the band launches into one giant-sized rock tune after another. Fake money is thrown into the crowd, flames and smoke jet from between the monitors, backdrops rotate between every track. At no point does anyone go on a rant or put on a poorly-made CGI music video in the background; if a string is ever broken, it’s fixed before the crowd gets to see it. It’s entertainment, mainlined straight into ears and eyeballs.

True to their leader’s praise, the band is incredible, tight as fuck and brimming with energy. The rhythm section kills; bassist Chuck Garric stomps around like a man possessed, and drummer Glen Sobel effortlessly thunders out ten-ton percussion. The star among them, though, is guitarist Nita Strauss, whose virtuoso talent and acrobatic energy gets the audience whooping every time she runs to the edge of the stage or leaps off of a monitor.

As for Alice himself, the man is in rare form. He cavorts around the set as nimbly as a teenager. He goes through costume change after costume change: a biker vest, a pirate blouse, a diamond-studded blazer, a straightjacket, all culminating in a white suit spattered with fake blood. Between songs, he pulls out all the stops and gives the audience every big hit and haunted house gag they’re waiting for—he gets zapped into a giant monster puppet at the end of Feed My Frankenstein, romances a rubber corpse during Cold Ethyl, and loses his head to a guillotine after Killer. The only time he acts his age is when he mentions “little old ladies” during No More Mr. Nice Guy and hobbles around using his riding crop as a cane.

The encore, of course, is School’s Out, during which Alice takes time to introduce his band. After pouring praise onto Strauss, he takes center stage, removes his top hat, and says, “And tonight, in the role of Alice Cooper… me!” As if the fourth wall wasn’t enough, he breaks the fifth when a special guest joins him onstage for the final chorus: Mike Myers, Wayne himself, who falls to his knees and bows before him, still not worthy all these years later.

To be fair, no one leaves the Beacon drenched in sweat and tenderized by a mosh pit. Instead, the crowd walks out smiling, covered in confetti and streamers, chatting about what a good time they had. Everyone’s jacked up on the spooky hilarity of it all. Sure, what we just saw was a production, choreographed down to the minute, in no way gritty or spontaneous. But if you’re going to be transported into a rock and roll fantasy, it should be by someone who’s been wearing greasepaint and singing about blood for half a century. Sometimes, only fun is real.

Alice Cooper's A Paranormal Evening At The Olympia Paris is available for physical and digital purchase via all formats here.