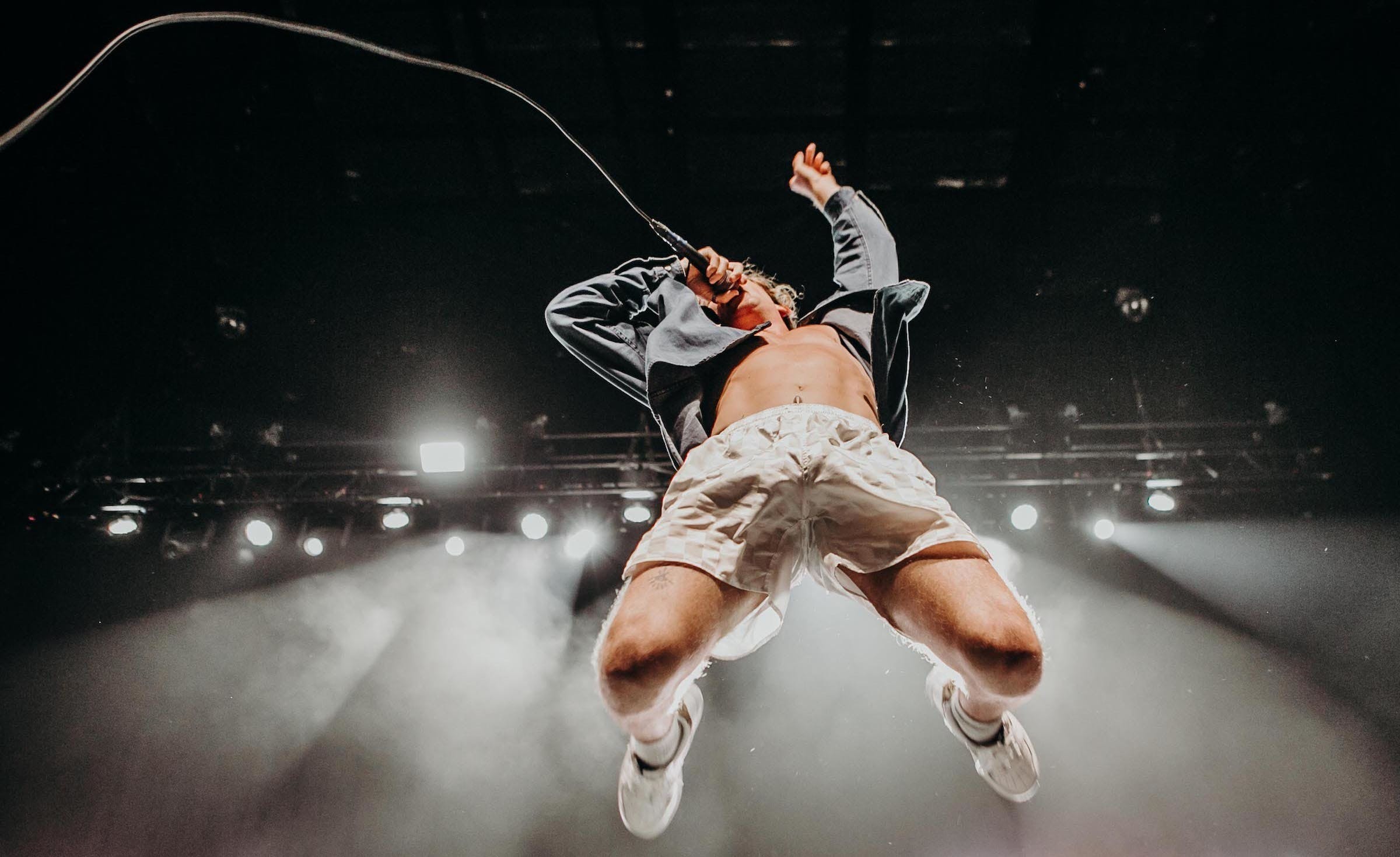 It’s a Friday afternoon in Coney Island, and the weather is perfect for a day at the beach -- cloudy, warm, and a bit humid, but not swelteringly, swamp ass-inducingly hot like it’s been in New York City recently. Whether people are lined up for roller coasters, various carnival games, fishing off the pier, or just to grab a Nathan’s hotdog and an ice-cold, extra large beer, everyone seems to be in a fantastic mood. As the sun starts to set, the boardwalk slowly begins to fill with young people heading up the beach in the direction of Ford Amphitheater. Grey Day, one of the absolute coolest tours of the summer bringing together hardcore and hip hop -- featuring $uicideboy$, Denzel Curry, Turnstile, Trash Talk, City Morgue, Germ, and Shakewell -- is about to begin.

As everyone files into the amphitheater and heads to their designated spot the venue is, confusingly enough, blasting John Mellencamp, Tom Petty, and Bob Seger. If there’s one thing this tour stands for, it’s that “genre” might very well be dead and you can like whatever the hell you want, so no one seems to mind (and even if they do, they’re too engrossed in their excited chatter to pay it much notice). Before the show even starts, the line to buy merch -- from both the hip-hop and hardcore bands -- wraps all the way across the back of the venue and out the door.

The show kicks off when LA’s Shakewell -- previously of the hardcore/metalcore band Betrayal -- takes the stage. The rapper seems entirely comfortable being the gateway to the evening, walking to the edge of the stage and telling the crowd to start a wall of death. “Let’s start this off right,” he commands. “Split this room in half.” It’s only 7pm and still light out, but the crowd obeys. Two masses of bodies rush toward each other and clash, but some look on in confusion from the back of the pit. “If you’re looking at me and not responding, then fuck you,” he says.

Atlanta’s Germ is up next. Signed to $uicideboy$’ own label, G59, it makes sense that he’s one of the openers, and he is met with rapt attention from the audience. He, too, commands bodies to crash together in the general admission up front. “Open this pit up. Open it the fuck up,” he insists. When an apparent fight breaks out in front of him, he pauses to say, “None of that fighting shit.” Shakewell comes back onstage, briefly, and the two alternate taking long drags straight from a bottle of cough syrup. The bass in their production is so heavy that the screens to the sides of the stage are visibly shaking.

At this point, it has begun to rain -- hard -- and everyone is grateful for the canopy arching over the otherwise outdoor venue. The rivulets pouring out the sides of the crowd prove a fitting backdrop to the next set: NYC’s own City Morgue. A hype-man donning a Motörhead shirt runs out and readies the crowd. When he’s satisfied with the screams from the audience, the duo -- rappers ZillaKami and SosMula -- emerges with their entire crew on both sides of the stage, including SosMula’s toddler brother, who fearlessly dances with them onstage between riding on their shoulders. ZillaKami’s raspy vocals are punctuated by SosMula’s higher register over metal samples in a way that feels terrifying and entrancing at the same time. This is the type of music you definitely want blaring in your headphones when you arrive to confront your nemeses.

Toward the end of the set, the team asks the crowd, “How many Slipknot fans we got out there?” There are various cheers. They launch into a song that samples Slipknot’s Spit It Out before quickly transitioning into more tracks from their mixtape, Hell Or High Water.

While Trash Talk hit the stage, the rain stops briefly, giving way to a huge rainbow over the ocean to the right of the crowd. The Los Angeles-by-way-of-Sacramento hardcore group are an absolute volcanic force live. Fully amped from the first riff, frontman Lee Spielman vacillates between running around the stage, diving into the center of the mosh pit, and standing fully upright while the crowd holds him up. As security lines up in the barrier, neon vests and stern, disapproving faces visible over the crowd, Lee decides to push their buttons. “You guys smoke weed?” he asks the crowd. “I don’t mean New York weed. I mean real weed.” A fan passes him a joint and he takes a long hit. Anyone in the room who wasn’t a fan of Trash Talk previously is now a fervent convert.

When Turnstile emerge onstage, the crowd leaps to their feet and screams. The Baltimore hardcore quintet just keep getting bigger and more beloved, and you can feel it in the air around the amphitheater. From the first riff of Real Thing, which also opens their 2018 album, Time & Space, they are sprinting, leaping and -- in the case of frontman Brendan Yates -- doing full-on pirouettes and side-to-side girations onstage. With his open button-up and athletic shorts, he looks and dances like hardcore Elvis dressed for a cruise, and it’s tough not to spend the whole set mesmerized by his moves and wondering how he learned how to land them with such grace.

By the time Denzel Curry hits the stage, hip-hop fans and hardcore kids in the crowd are equally warmed up and ready to completely lose it to the catchiest artist on the Grey Day tour. When he walks out to the first beats of Ultimate, every person in the pit and the seats alike are on their feat screaming. By the time he plays his massive hit, Ricky, you can barely hear him over all the singing, and everyone the chorus kicks in, everyone throws their hands up and bounces in unison. When he performs a tribute to his late friend XXXTentacion, members from every band of the night fill the stage to join in.

At the end of the night, $uicideboy$, Grey Day’s headliners, are greeted by a crowd that has yet to slow any signs of slowing down. The stage becomes enshrouded in purple light and green lasers, which cut through the rising smoke in the crowd. The New Orleans rap duo, consisting of cousins Ruby da Cherry and $crim, initially gained popularity through Soundcloud. But one glance around the amphitheater makes it clear that their popularity has long-since transcended the platform. Similarly, they seem to have erased genre lines, too: In what is probably the best metaphor for Grey Day in general, they recently released a collaboration with blink-182 drummer Travis Barker and Korn guitarist Munky called LIVE FAST DIE WHENEVER, an abrasive, heavy EP that unites fans under the banner of all things heavy. Onstage, Ruby da Cherry refers to the record simply as “uh, the yellow one,” which is met with a few chuckles, but mostly overwhelming cheers.

Tonight, genre is a bygone notion. In its place is simply heavy music that makes you dance, jump, headbang, and circle-pit. And honestly, that’s probably the way it should be.

Grey Day: A Who's-Who Guide To The Hip-Hop and Hardcore Tour of the Summer

5 Soundcloud Rappers That Metalheads Need To Know About

A Short History of Metal and Hip-Hop's Greatest Crossovers