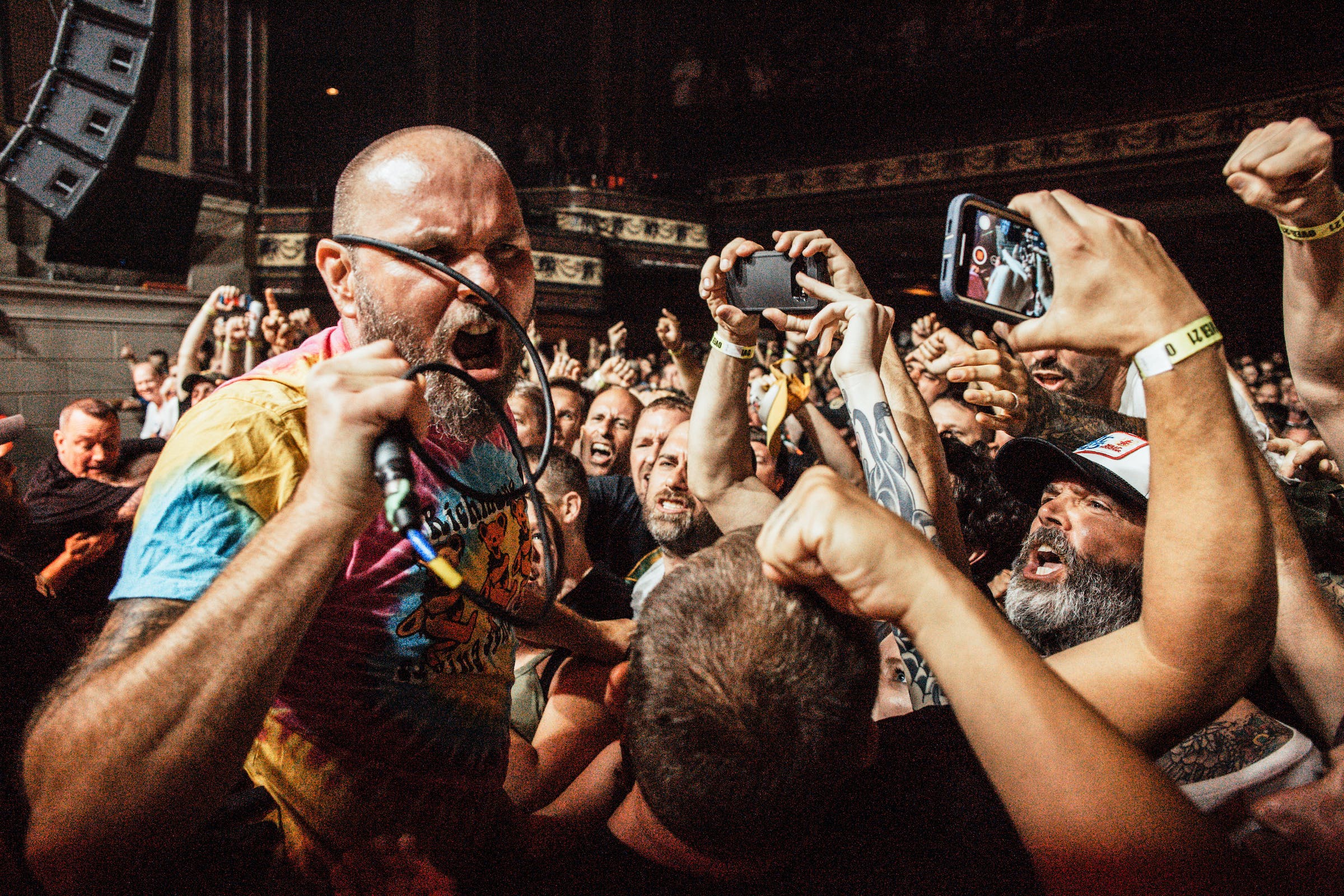 “I might not still be alive if it wasn’t for Avail!” exclaims Iron Reagan frontman Tony Foresta. They are opening the first night of Avail’s weekend of reunion shows at The National in their hometown of Richmond, Virginia. He launches back into another scorching blast of crossover thrash, whipping the crowd into a joyous frenzy. On its face, it appears an almost hyperbolic notion that a band could be responsible for anyone’s salvation but it’s a story many know quite well.

Avail are one of those special punk bands -- never quite being pigeonholed into one scene or another. In the 1990s they were the ultimate unifying band: They were a source of inspiration and fun in an era where bands were more likely to be met by a sea of crossed-armed, judgmental fun-vampires than stage-divers and smiling singalongs. Through years of tireless touring, they built up a reputation for being a ferocious, high energy live band. They were the band everyone in the heavy-music community loved and you were as likely to see an Avail patch on the pristine backpack of a baggy pants wearing straight-edger as you were to see it holding together the pants of a black-clad, dreadlocked crust-punk.

Friday night starts with a steamroller of face-melting crust, courtesy of Richmond’s Asylum. Their searing blast of brooding, Discharge-influenced hardcore that sets up the aforementioned thrash heroes Iron Reagan, who proceed to pummel the audience at a blistering clip inspiring every knee to skank and every head to bang. Interspersing their relentless onslaught with Tony’s heartfelt words about not only Avail’s importance on his life but also their impact on a city with a vital and thriving underground music scene.

It is here where one begins to feel the anticipation building as the realization that after a 12-year absence, Avail is about to return. The lights go down, a giant backdrop is unfurled with the artwork from their 1998 album Over The James and suddenly they explode into the blistering South Bound 95 from their 1994 album Dixie, a paean to the misery of life on the road and the joy of the return home. And what a homecoming it is as they proceed to tear through 25 tracks in around an hour spanning their career—dominated by songs from Over The James but hitting even their second EP Attempt To Regress from 1993. As they conclude the set with Simple Song from their third LP 4AM Friday there is a sense of unbridled joy in the room not only in what has just been witnessed but also in the realization that everyone is gets to do it again tomorrow.

In a lot of ways, Saturday was the “locals-only” show, as tickets were available only to those willing to stand in line for hours to purchase from the box office. It kicks off with part of the new wave of Richmond hardcore, Nosebleed. A ripping start to the night—with vocalist Valentina stalking the stage, spitting lyrics with venom soaked lyrics layered over quick blasts of hardcore punk they manage to dominate a huge room in the same manner they take over a cramped basement. No stranger to a big room, Down To Nothing hits next tearing through a set of melodic and stomping hardcore crunch starting with the homage to their hometown, Life on the James and going on paying tribute to hometown heroes Gwar and Four Walls Falling (via a melody of their songs Sick of You and Culture Shock) as well as rattling off a list of important and inspiring Richmond bands (Inquisition, Fun Size, Strike Anywhere, Algebra One, Government Warning, etc).

It is a love fest filled with sincerity and affection for a scene and a town, which sets the table for Avail to take the stage a second time causing the crowd to explode at a seismic level. Leading off with the song Deepwood which starts their album Over The James they again scorch through another twenty-five song set, swapping out tracks from Dixie for 4AM Friday, but retaining many of the barn burning, sing-alongs from the prior night. There is a overarching sense of just how special and meaningful this all is for both those in the pit as well as those on the stage that permeates the room. When vocalist Tim Barry tosses the mic into crowd as the band goes into the chorus of Connection, the room feels like its about to explode as it swells into thousands of people screaming along.

This reunion show was a testament to the unique power that music has to affect, inspire, and genuinely move people. Avail have long tapped into that simply by just being sincere, playing the music they love despite trends, and doing it for the joy alone. The question is: Does this mean Avail are back for good? Hopefully the answer is yes.