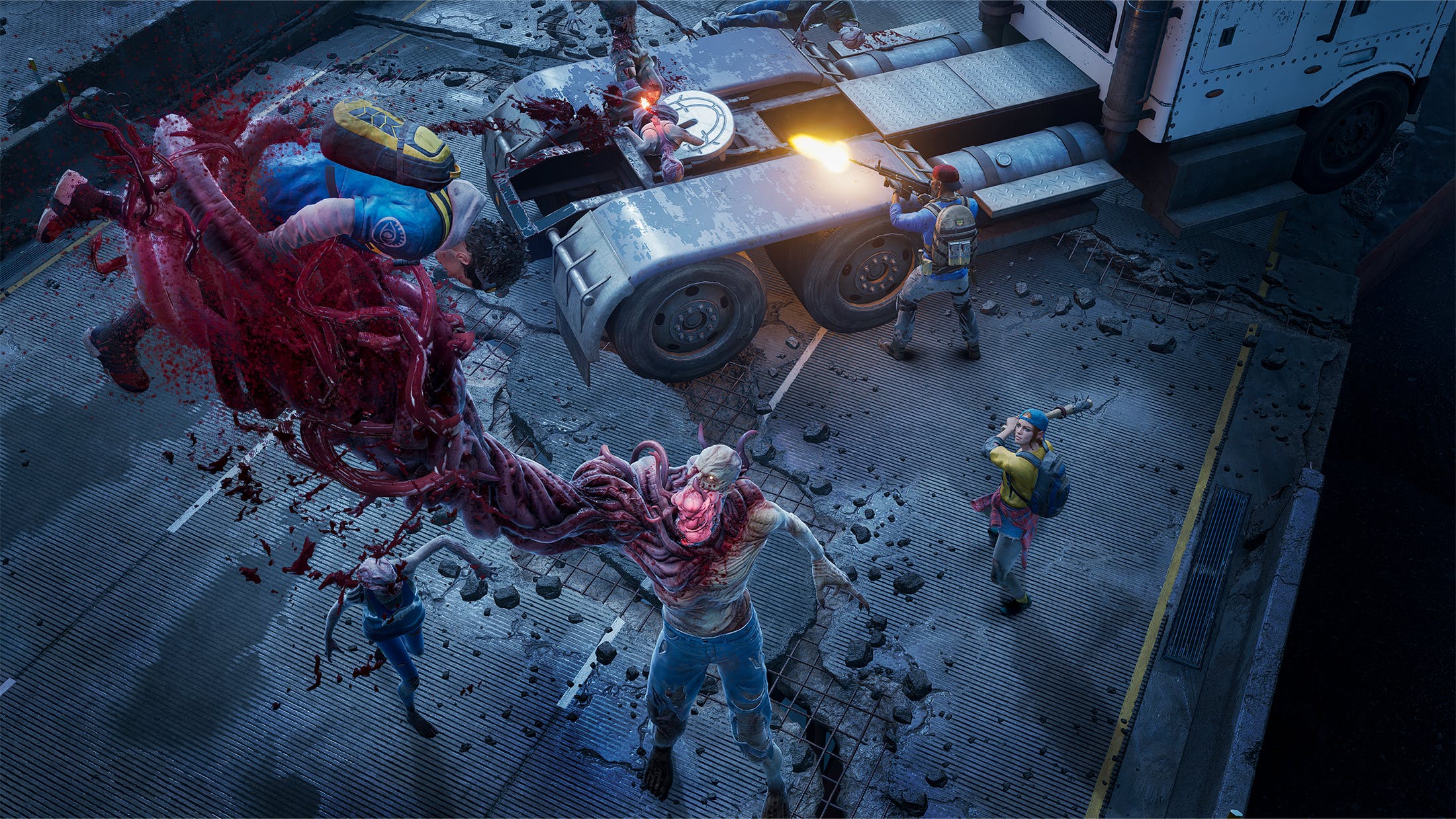 In partnership with Back 4 Blood
Words:
Sam Law

Simply put, Back 4 Blood is a riot. Picking up where they left off with the revered co-op first-person shooter series Left 4 Dead, Turtle Rock Studios (previously Valve South) were clearly less interested in reinventing the wheel than fine-tuning their winning formula, making a few tweaks to keep the carnage fresh, and wringing the most from current-generation hardware for the maximum amount of gore and goo. For the uninitiated, a good reference-point would be the larger-than-life action, dark humour and genuine thrills that Zach Snyder shot for with this year’s Netflix hit Army Of The Dead – except it’s so much more fun when you’re in the shoes of one of those survivalists, working your trigger-finger to the bone.

We at Kerrang! were fortunate enough to get our hands on an advance code for the PS5 (whose chunky adaptive triggers bring a whole new level of immersion) and we’ve been busy blasting, blading and building our card-deck over the past week, knee-deep in claret every step of the way. Here, we’ve managed to loosen our white knuckles long enough to present a five-part survival guide to not getting utterly annihilated the first time you lift the latch on that safe room door…

Back 4 Blood’s particular zombie mythos revolves around the Devil Worm parasite and the various horrible ways it affects its once-human hosts, The Ridden. Understanding and being prepared for each of them is crucial to your making it from one area to the next, because there’s no stopping to consult a bestiary once the action begins.

By far the most frequently encountered are the Common Ridden: basic shambling zombies who’re easy enough to despatch as long as you don’t allow too many to build up at once. They will occasionally show up in armoured variants (infected riot police, for example), where going for headshots is likely the safest bet. More challenging are the grotesque, overpowered mutations who can roughly be divided into five categories. The fast-paced, four armed Stingers will have you twitchily aiming at the rafters and dodging gluey projectile attacks. Massively bloated Reekers, some of whom explode on death, showering the surroundings with toxic pus, will have you emptying magazines into their swollen abdomens up to the very last second. Towering Tallboys cover ground quickly and cause big damage, requiring you to aim for the shoulder and detach their club-like oversized arm. Long-necked Snitchers will kick up a racket and call in the horde. Creepiest of all are the legless Sleepers, who appear dead but will spring out from cocoons in hidden corners to rip your face off in what’s surely a tribute to the sneaky Xenomorphs from Aliens. All have their highlighted weak points and its advisable to hit them as quickly as possible.

Then you’ve got the massive boss variants. We won’t spoil too many surprises here, but safe to say the first times you come across the hulking Breaker, tentacled Hag or the colossal ogre slinging projectiles like a living trebuchet, you’ll want to have a full sack of ammo to hand.

2. Nail your weapon of choice﻿

There’s no lack of options for how to deal out devastation. Whether swinging a fire axe, spraying bullets from an SMG or marvelling at the beefy kickback from a shotgun blast, it’s a hell of a lot of fun to try out every one you come across. In fact, one of the game’s greatest achievements is having each weapon feel truly distinct and satisfying, as well as being rooted in reality. With players limited to carrying just one primary weapon, a sidearm and a couple of additional items (from pipe bombs to defibrillators), however, it’s crucial to understanding which types and combinations work for you for when the going gets really tough. We favoured the balance of rapid-fire and stopping power offered by the RPK light machine gun, with a fully automatic TEC 9 pistol tucked away for those awkward moments where you find yourself cornered and out of ammo, or felled and fighting back the horde with one hand until (hopefully) a teammate arrives to bring you back to life. Others will prefer the no-nonsense close-quarters boom of a TAC14 pump-action shotgun, slicing and dicing with a machete, or trying to distance themselves from the bloodshed with a Barrett M95 sniper rifle – though you’ll need a well co-ordinated team not to be overrun.

Speaking of a well-co-ordinated team, the 4 in Back 4 Blood remains pivotal to the gameplay. Players choose to play as one of eight playable “cleaners”: naturally immune combat specialists whose job it is to complete missions and kill the undead during this particular zombie apocalypse. Each cleaner comes with their own unique starting sidearm and specific abilities, which can substantially influence your play-style as well as the balance of the in-game team of four. Our go-to was Walker, an ex-army ranger with strong combat skills and a Glock 23 tucked into his belt from the outset. We were fans of high-stamina, nail-bat-swinging student Holly, weapons and ammo laden doomsday prepper Hoffman, and sawn-off shotgun wielding elder Mom, who specialises in reviving fallen comrades and carrying support items, too. It’s absolutely crucial to the hectic, finely-balanced combat of Back 4 Blood that you select your character carefully and fully understand the myriad strengths and weaknesses of the other members of your team. And when the shit really hits the fan, don’t ever be tempted to flee from the pack. It’s vital to stick together, sometimes back-to-back, to cover every angle and rescue the fallen, lest you very quickly become a red puddle trampled into the muck.

Motörhead’s Ace Of Spades comes on the jukebox during one of the stand-out set-pieces early in Back 4 Blood’s insane campaign. It’s surely a sly nod to one of the primary changes Turtle Rock Studios have made to the original Left 4 Dead formula. Helping randomise each segment and play-through – ensuring that no two players’ experiences will ever be the same – as well as deepening the strategic approach, “cards” are dealt out at the start and end of levels which manifestly change how scenarios play out. Over the course of replay after addictive replay, players build a collection which can be split into decks of 15 offering a variety of buffs and perks (divided into four categories: reflex, discipline, brawn, fortune) which can vary from ramped-up stamina or damage to increased likelihoods of discovering in-game currency. Although you’re unlikely to run into too much trouble if you choose unwisely – or are dealt a bad hand – the mechanic becomes integral to guiding and honing your approach as the action progresses. On the other side of things, the “AI Director” selects their own hand of “corruption cards” at the start of each level to spice things up. The effects of these vary from environmental modifications (mist, darkness) to adding armoured enemies and bosses to the dreaded Hunted card, which chucks a whole horde of Ridden at you every few minutes. It’s essential that you pay attention to these, as they should affect everything from weapon selection to time management. ‘Read ’em and weep, the dead man’s hand again’ indeed.

Let there be no misunderstanding: Back 4 Blood is not an experience for the shy, retiring gamer, nor is it one for the faint of heart. There will be blood. So, so much blood. There will be chaos. There will be moments of controller-snapping stress and air-punching euphoria. Key to that is the fact that if you take your foot off the pedal for even a moment, it can be incredibly easy to be overwhelmed by the hordes of the ridden. Setting off a car alarm or disturbing a flock of resting birds can be the difference between a walk in the park and five minutes under siege, scrabbling for every scrap of ammo you can find and every sharp edge you can shove between the nearest enemy’s glowing eyes. Ultimately, we’ve found that the best course of action is almost always to take the fight to them, shooting on sight, sparing no zombie, and maintaining your team’s eternal forward motion in pursuit of the next objective. Whether you’re unleashing hell in a disused gymnasium, making your stand at a fortified diner or fleeing a ship with a ticking time-bomb strapped to its hull, it’s a case of gritting your teeth, relishing your bloodlust, and embracing the adrenaline. Lock and load!

Back 4 Blood is due out on October 12 for PlayStation 4, PlayStation 5, Windows PC, Xbox One, and Xbox Series X.