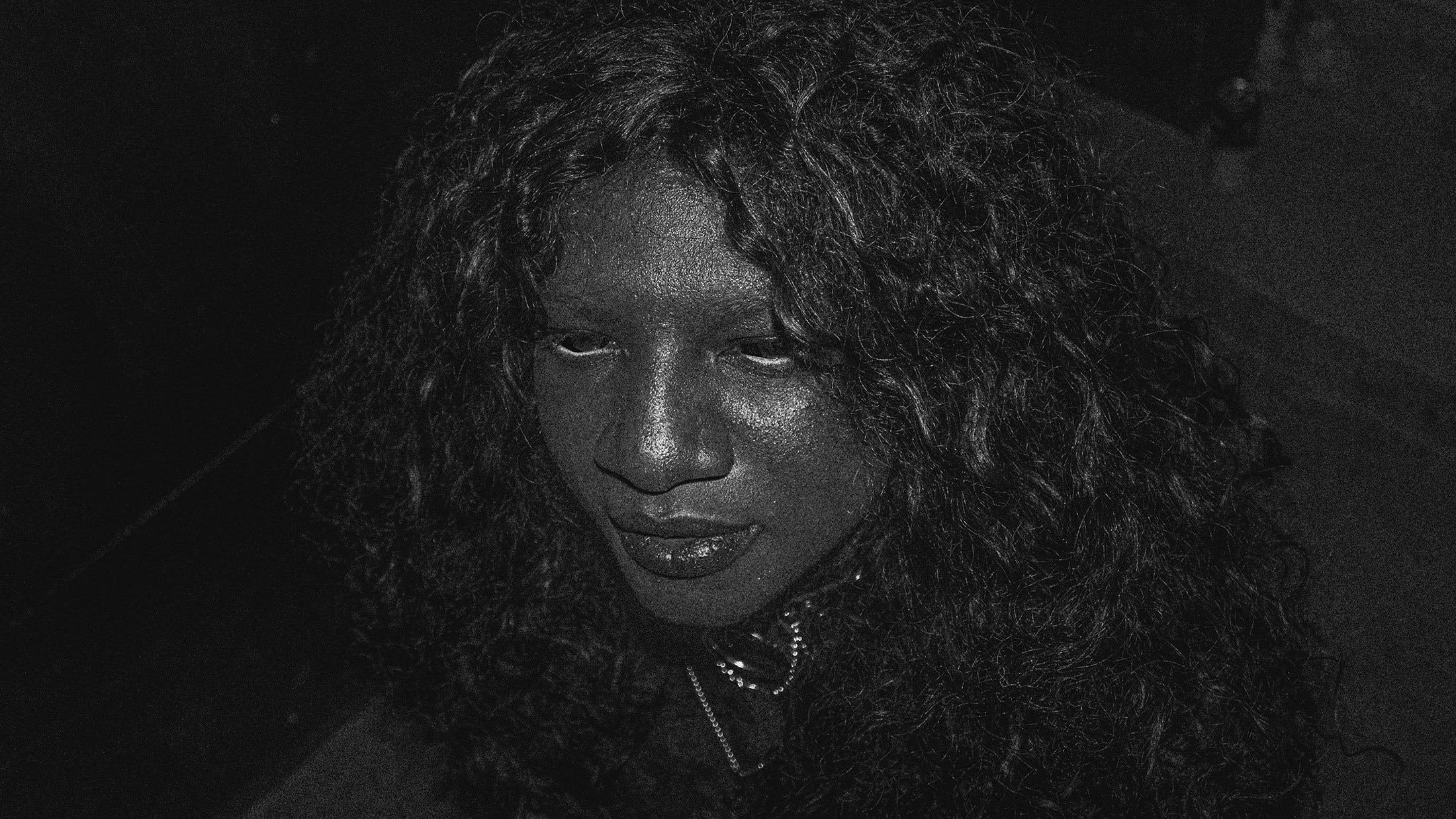 As the conversation about ‘genre being dead’ rolls on, regardless of your position, it’s hard to disagree with metal being more than a strand of rock music – it’s a state of mind. Darth Vader is metal, Batman is metal, Maleficent is metal… all without them knowing the chorus to Enter Sandman. And in the deepest, darkest corners of underground hip-hop, rapper Ashanti Mutinta (aka Backxwash) is channelling the power of the Devil’s music into her own twisted brand of aggressive expressionism.

Born in Zambia, Ashanti was raised in a hyper-conservative environment as a member of the Tumbuka tribe. At around the age of seven she was listening to the likes of Boyz II Men and set her sights on becoming a singer, before discovering hip-hop through Notorious B.I.G.’s Mo Money Mo Problems video. Immediately she was hooked, and started learning how to rap with the help from her older sister.

However, embracing her artistic tendencies as a child didn’t always go down so well.

“I was always trying to express myself, but it’s difficult when you’re living in such a conservative place that the people around you don’t really like the music you’re listening to or trying to emulate,” she remembers.

“My dad hated it because any time that you stray away from anything that’s not school, he gets pissed off and tells you to study. It was my chance to express myself, but I’d always get stares from the elders because of the music, or people thinking you’re going to be a musician when you grow up – which is their worst nightmare.”

The shackles on her creative freedom, coupled with the deep, personal questions she was asking herself, led to Ashanti leaving her homeland in 2009 and moving to Canada at the age of 17 to join her brother and sister. Staying in British Columbia until it got “stale”, she soon relocated to Montreal to avoid the rat-race of mortgages and children.

Despite moving thousands of miles away, and her Christian upbringing no longer playing a role in her life, Ashanti still connects with her tribe on a spiritual level – “Anybody else would call it witchcraft, but we call it spiritualism.” She explains that her tribe’s practices are about honouring family, and their deity The Great Bow provides guidance on life through ancestors.

But some answers need to come from within.

“I was asking a lot of questions about myself and I was able to express myself because there was a like-minded community around me and it wasn’t so weird having the thoughts that I was having,” she says.

Eight years after leaving Zambia, at the age of 25, Ashanti began to transition, freeing her from the prison that had held her mentally captive for so long back home.

“When you’re growing up in such a conservative environment, it’s taboo to even ask those questions about yourself,” she explains. “There’s a part of you that knows, at the back of your head, but it’s hard to ask those questions without putting yourself in danger – especially in Zambia.”

She credits moving to Montreal and starting fresh for who she is today, allowing her to embrace the Backxwash part of her psyche. Attending ciphers (a type of freestyle rap battle) and revitalising her love of music, Ashanti soon began recording, regaining the confidence needed to front one of the most exciting industrial hip-hop projects of 2020.

Taking the name Backxwash because it sounded like an old ’70s punk band – “and I thought it’d make straight people feel weird” – since 2018 she has released two EPs and two full-lengths, the latest of which (God Has Nothing To Do With This Leave Him Out Of It) fully embraces her darker side, including Sabbath samples and Led Zeppelin-inspired drums.

Describing her music as horrorcore – “in the sense that instead of watching a slasher flick, you’re watching found footage” – she pins Death Grips, Moody Black and early JPEGMAFIA as influences, but also professes her love of Jimi Hendrix and the first Black Sabbath album.

“The thing I like about the [metal scene] in the earlier days is that I share the same sentiment about challenging the way religion is actually structured,” says Ashanti. “Growing up listening to rock music, especially black metal, was a no-go. People would probably think I worshipped the Devil (laughs).”

While God Has Nothing To Do With This Leave Him Out Of It (the title of which is taken from Spanish horror movie Verónica, and a tongue-in-cheek jibe at her religious upbringing) isn’t a metal record, the opening loop of Ozzy’s iconic ‘Please god help me’ line and the sinister, abrasive sounds trigger the same synapses as any ‘heavy’ band you care to mention. Lyrically, it targets organised religion, gender identity and addiction through bloodstained crosshairs, and even its artwork of a wicker sigil is reminiscent of something you’d see on backpatches at Roadburn.

From the Into The Void's swaggering menace to the venomous antagonism and elongated guitar drones of stand-out track Black Magic, Backxwash’s murky world bubbles and oozes with genuine anger and a metal spirit, drawn from a deeply personal well.

“[Black Magic] mostly has to do with being depressed and being sent over the edge; instead of getting help, you’re concentrating on your vices,” Ashanti explains. “I get depressed a lot and sometimes I just go to the bottle and I used to have as lot of trouble with that. There was a time I had a lot of trouble with drugs as well.

“The song exudes that feeling of ‘forget getting help, I’m going to help myself’ and relating that to people’s perception of what black magic is – that it’s harmful and something you shouldn’t dabble in. I relate that to your vices and something you’re essentially addicted to.”

On Bandcamp, where the album is available to buy (although is accompanied by the message “If you can't afford send me an email or DM and I will give you a free copy”), Ashanti has described the record as her version of forgiveness. Throughout, she wrestles with the premise of reconciliation with harrowing lyricism and introspection, enlisting various producers to help realise her vision and try to find a solution.

But what does her version of forgiveness actually mean?

“I still don’t know what forgiveness is,” she begins. “In a situation where if somebody wrongs you, are you supposed to forget their past transgressions and give them a clean slate? How do we pick who is deserving of forgiveness, and should I be able to forgive myself? That’s where the sample of [bishop] T.D. Jakes on the last song comes from, because I like the way he ends with the uncertainty of forgiveness.”

However, not everything can be forgiven, as Ashanti explains of her continued resentment towards her conservative childhood.

“I look at kids growing up today and the freedom they have to express themselves, and the ability to transition at a much younger age,” she notes. “I just compare it to my upbringing and it’s unthinkable. It’s hard to express yourself when somebody has such a hold over you.

“But then again, those experiences made me the person I am today. In a weird way, I’m glad I got to learn from those experiences and have a different outlook on life because life is about evolution and development.

“I can never return to it. My perspective’s completely changed. There’s a moment when you grow up and you think, ‘Oh now I get it, now stuff makes sense.’ I think I’m pretty much done with it.”

Backxwash’s focus on religion, spirituality and forgiveness is just one piece of her Vantablack puzzle. In fact, despite having just dropped a new LP, Ashanti is already looking ahead to the next project: something even more metal, something even more adventurous.

“I have this project coming up called Stigmata: it’s going to sound like a soundtrack to a high-fantasy movie and it samples a lot of Christian black metal because they have really interesting passages in it,” she reveals. “I’m probably going to put it up for free because the bands I’m sampling aren’t big bands… I’m taking the samples and I’m chopping them up, but the tone of the music is so apocalyptic, because the Bible is an apocalyptic book.

“After that I’m going to work on the album that comes next, and I’m planning a release for September next year.”

There certainly is no rest for the wicked.

God Has Nothing To Do With It Leave Him Out Of It is available via Bandcamp.