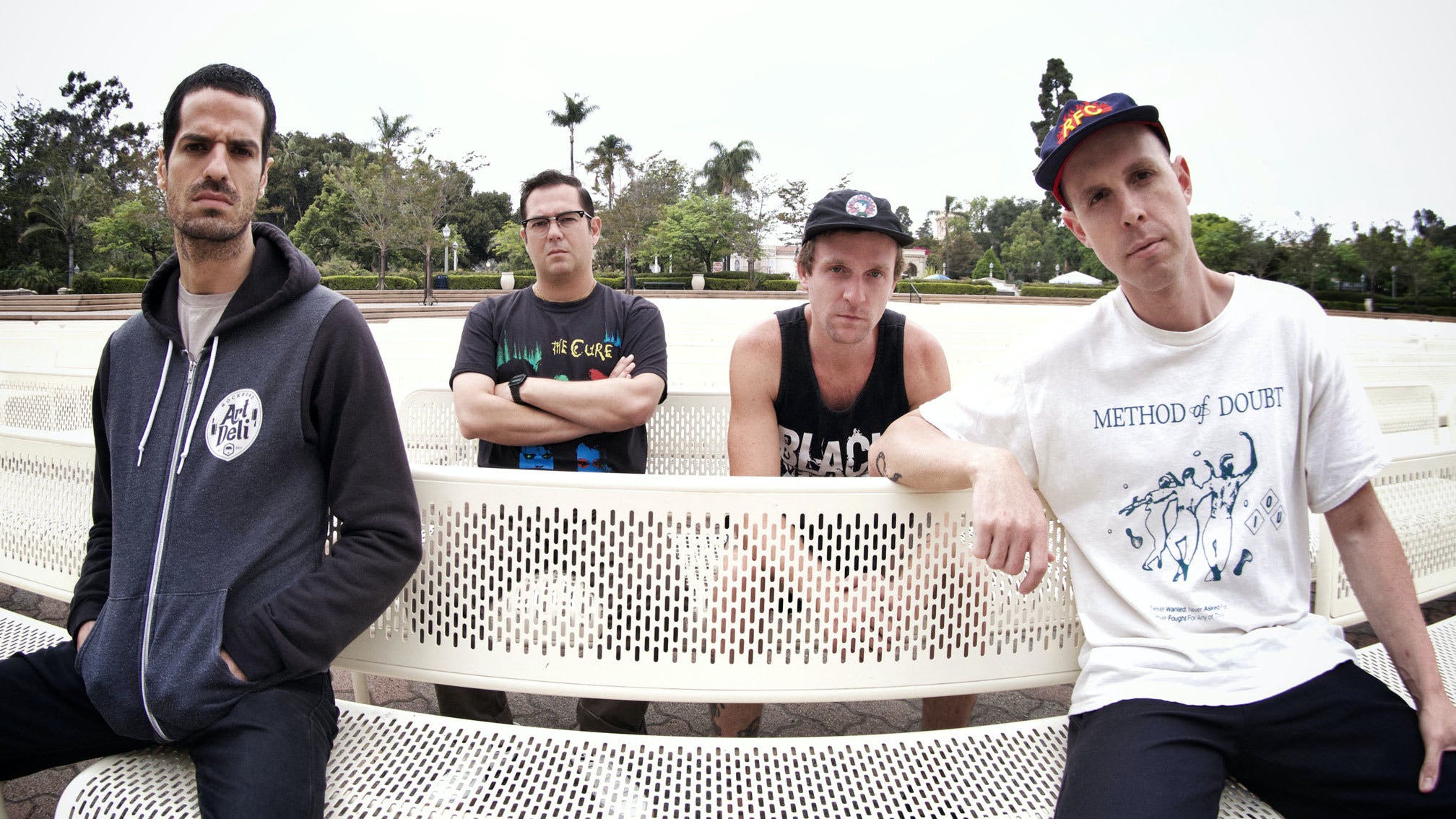 By the time he was 14 years old, Bent Blue vocalist Tony Bertolino was pretty good at eating lunch alone. His dad had been in the military and they moved around a lot, so every so often he’d show up at a new school and start over. This one lunchtime, after moving from Colorado to Southern California, he decided to roll the dice and sit down next to some classmates who looked his kind of weird. He’d been skating and listening to pop-punk just long enough to recognise that town’s skaters and BMX kids. Once their initial awkward exchanges had faded, Tony recalls one dude leaning over with an earbud in hand: “He was like, ‘Hey, have you heard of hardcore?’”

Tony decided that he’d see what this noise was all about and followed his new friends to a show in someone’s garage the following week. “At that point I was sold,” he remembers. “I was like, 'You mean kids can just do this? They can just put on shows?'” Soon, he was out there all the time, splitting house shows with catching bands at DIY spots such as the Ché Café in San Diego. He found his lane in straight-edge and the lyrics of Have Heart’s Pat Flynn, whose work suggested that hardcore could be politically engaged, intellectually stimulating and hopeful as well as gnarly.

But despite his early entry into his local scene, Bent Blue represent Tony’s first real shot at fronting a band. Based in San Diego county, the quartet – completed by guitarist Diego Montoya, bassist Alex Alls and drummer Shane Grimsley – are outliers within their own eclectic scene and the wider California tapestry. Some of their local contemporaries hew closer to crust and straight-ahead punk, while the headline sounds out of the Bay Area and Los Angeles are perhaps more easily aligned with crossover thrash and metallic hardcore.

Their music, though, is fast, clean and indebted to the DC scene associated with the Revolution Summer. Think Gray Matter, or the bands that bridged the gap between Minor Threat and Fugazi, with a side of Youth Crew. They have more in common with a band like Praise, out of Maryland, than those in their immediate vicinity. “There is sort of a DC resurgence that's happening on the east coast, particularly in the Baltimore area, because they're so close,” Tony explains. “But on the west coast, there's not much of that happening. We definitely have a lot of people scratching their heads at shows.

“We really didn't even expect to be accepted by the general hardcore scene,” he adds. “We all grew up in that, and we all really love that community, but I think we were all taken aback when we had a good response, and were embraced by a lot of folks. Diego, our guitar player, is often asked, like, does he put any distortion on these guitars? And he does, he's got some gain on it. We just kind of said, ‘You know what, let's try something that's non metallic, something that has an organic sound to it.’”

The band’s demo Between Your And You're was released in March 2020 and subsequently given a physical reissue post-pandemic by War Records, the label run by Strife guitarist Andrew Kline. It exists in a state of perpetual motion and infectious energy, brought out by Shane’s hyper-speed drumming and Tony’s engaging lyrics, which seek to provide the same sort of outlet that Have Heart did for him all those years ago.

Right before he settled back in California there was a knock at his door, and two uniformed men told his family that his dad had been killed in an ambush in Iraq. His mother raised him and his three younger siblings alone from there on out. “The war was pointless. My dad died for nothing,” Tony told Do Something a couple of years back. “As I've gotten older, that reality seems to sting more and more and has taught me to be distrustful of government.”

That questioning stance is a pointed, vital element in Bent Blue’s music. Tony is a thoughtful writer – he carries a notebook around and is always texting himself ideas or devices that might spark a song – and Between You And You’re contains treatises on immigration, gun control and the pernicious threads of influencer culture that determine so much for young people. 'Begging, crying, praying, fighting, swimming, climbing, hoping, dying, for a home that lasts,' he screams at the goosebump-raising climax of the title-track.

Bent Blue are sitting on a new record right now that is set to push their music in a few new directions. Once lockdown settled in, almost immediately after the release of their demo, they began meeting on Zoom to share ideas while maintaining a rolling shared playlist. Once they could get in a room together they knew where each other were coming from: Diego had riffs, Tony had thoughts and ideas.

“I feel like it's an eclectic mix of sounds,” the frontman teases. “If you listen to the demo, each song is very distinct. We've come to understand that that's just what our band does. This new record has a couple more straightforward hardcore songs, but it also has a good mix of post-hardcore influences. There are a few more mid-tempo songs, whereas the demo didn't quite have that. We have one single in particular that is very unexpected, it's sort of an outlier. It has a ’90s emo thing going on and a chorus, when our demo doesn't have any consistent hooks.