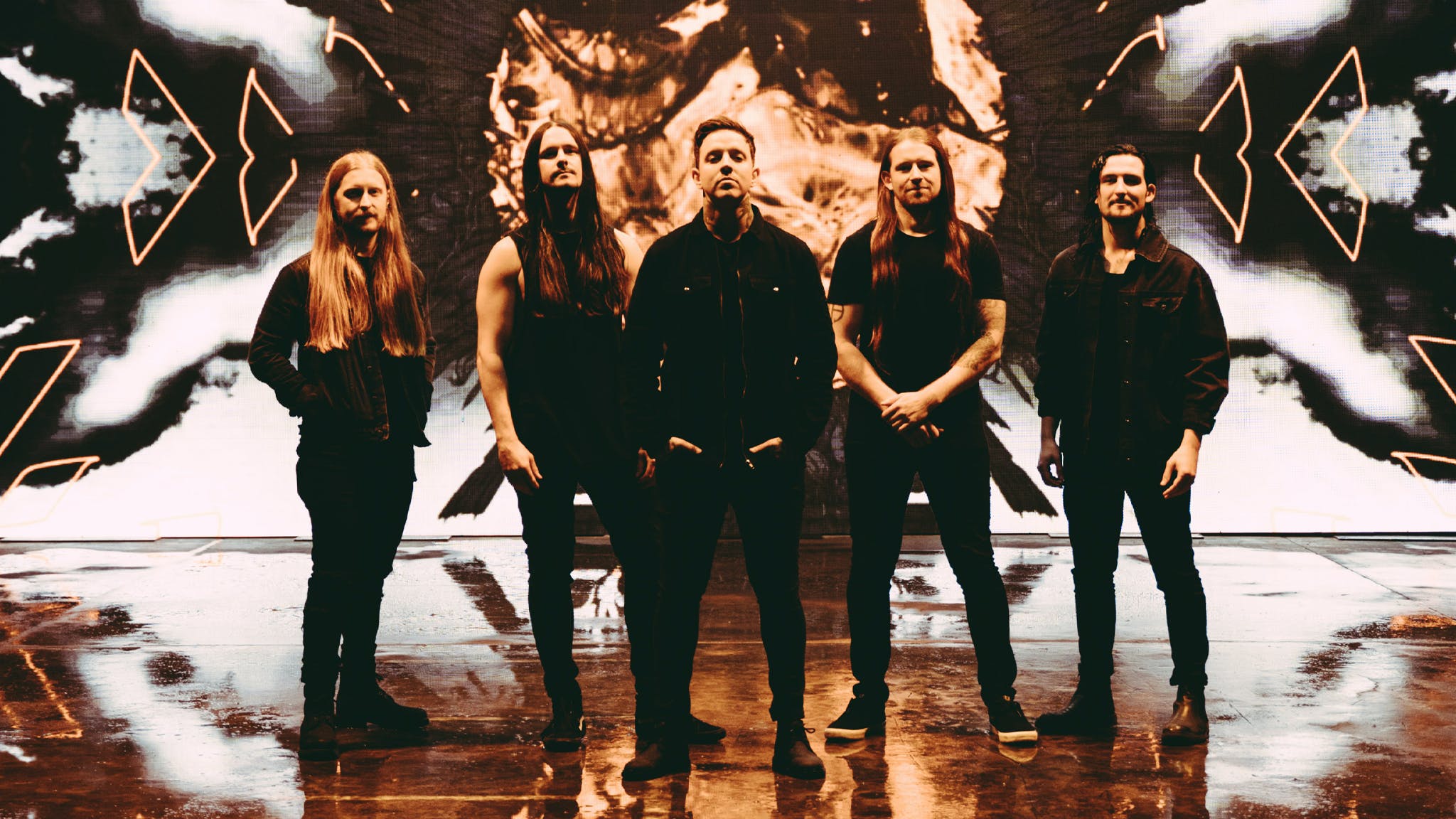 When Bleed From Within stepped out onto the hallowed Donington turf last summer, they brought the fire. Literally. Up until their June 19 main stage slot, Download Pilot had felt like exactly what it was: a hastily-arranged experiment populated by bands finding their feet in front of a festival crowd for their first real show in almost a year and a half. As the Glaswegians unleashed ferocious second track Pathfinder – performed live for the first time, ever – on the unsuspecting mid-afternoon audience, though, and a battery of gas-stacks belched flame-towers towards the pale grey sky, it was clear these lads weren’t holding anything back.

“We were the only band with pyro because we were the only ones who read the small-print,” laughs drummer and band manager Ali Richardson as we recall how that set, and its even-bigger follow-up at Bloodstock, were amongst the only truly uncompromising moments in a summer tied up in mid-pandemic red tape. “We actually asked another band if they’d want to chip in to share the cost. They told us that we weren’t allowed. We just thought they were fuckin’ daft. That had been the longest that any of us had gone without playing a show since 2005 so we threw money at the production and this massive 14-metre backdrop because we wanted to enjoy it.”

Frontman Scott Kennedy grins: “It was a rollercoaster of emotions. Just getting to do things like that is a dream. When we were planning the show, it was less that I was excited for the crowd to see the pyro than that I was excited to see the pyro. But the first time it went off and you saw the look on people’s faces, it was just like, ‘Let’s go!’”

Moments like that have been a long time coming for Bleed From Within. Having originally formed way back in 2005, they’re not the new band many onlookers presume, but what’s lacking in flash-in-the-pan sparkle is more than made up for in hard-earned experience. Like Sheffield supremos Malevolence, this is an outfit who’ve developed the work ethic and self-ownership, attention to detail and unaffected enthusiasm to go out there and make such moments happen for themselves.

A killer discography doesn’t hurt their cause, either.

2009 debut Humanity, 2010 follow-up Empire and 2013’s Uprising laid a rock-solid foundation off which BFW built a reputation for hard work and consistency with support slots alongside genre legends like Megadeth, Amon Amarth and Carcass. 2018’s Era saw a consolidation of the current line-up (completed by lead guitarist Craig 'Goonzi' Gowans, his rhythm counterpart Steven 'Snev' Jones and bassist Davie Provan) and a substantial step up in scope and sheen. Fifth album Fracture was being trumpeted by insiders as the record with which they’d blast through to the big-leagues, but found its path blocked by the COVID crisis. Taking the brave decision to feed fans’ need for new music they dropped it anyway on May 29, 2020. What seems now like an all-or-nothing gamble paid off handsomely, forcing them to improvise new channels of communication with their fanbase which solidified old bonds, and seemed to bring waves of newcomers onboard.

“Lockdown was a negative time for every person on this planet, but it was a turning point for our band,” Scott explains. “It was a wake-up call. Fourteen years of experience had gone into Fracture – playing pubs and toilet stops, sometimes just to bar staff – so we were prepared, but the circumstances in which we released forced us to start doing live Q&As online and trying different things to engage with people. We learned so much about what we can do to keep thriving.”

Sixth album Shrine (out June 3) is the sound of those lessons, that keener understanding of the fans-eye-view, being deployed to seize success far greater than that promised two years earlier.

Written in the immediate aftermath of Fracture, and recorded between Genesis legend Peter Gabriel’s Real World studios in Bath (close to Ali’s current home in Bristol) and BFW’s main recording base in Dalmarnock, east Glasgow, they engaged with long-time collaborator Adam ‘Nolly’ Getgood of Periphery, as well as Jamie Finch of London rockers Anavae, but undertook the lion’s share of the work themselves. With experienced producer Steve handling that side of things, the other members self-employed in music industry (or industry-adjacent) jobs, and metal mega-label Nuclear Blast happy to provide resources but remain hands off, there was ample room to experiment and push the boundaries of what they’d already achieved.

“We know where that bar is and where to push,” explains Ali. “We don’t have a choice but to set that bar for ourselves and continue to raise it. We’re arguably the most active metal band in the UK at the moment, but that’s because we’re inspired, because we’re working well together and because we’re moving forward. Fracture served its purpose. It filled the gap. And it gave us focus. Without that album to keep us going over lockdown, we risked falling into obscurity. But now we’ve delivered what’s unquestionably our best album to date, musically and lyrically.”

Indeed, across its 12 machine-tooled tracks, Shrine feels like a sonic step up. Lead single I Am Damnation was selected specifically to give fans a preview of the sonic evolution: its scratchy synths, pulsating keys and massive melodies evoking giants of modern metalcore like Architects and While She Sleeps. Levitate showcases the input of composer Simon Dobson and the Parallax Orchestra who contributed swelling string-sections throughout. Flesh And Stone is an exercise in high-drama evisceration that slams the accelerator and barely lets up. Shapeshifter feels like a fine-tuned update of the throat-ripping sonic violence that got them here in the first place.

Even more striking is the emphatic real-world relatability of the lyrical content.

“On Fracture we started to get quite personal, but this album has seen us begin to talk more personally than ever before,” admits Ali, reflecting on personal experiences poignantly echoed in songs like Killing Time. “Through lockdown there was that period of self reflection, sitting in the house with your own thoughts, feeling those boiling over, seeing them spill out onto the page. By the time it got to the end of 2020, it became particularly hard and I turned to booze. I was pissed every weekend. Every week. It was a horrible time – and I think I speak for everyone in the music industry whenever I say that. We all came face-to-face with those things that you maybe manage to suppress when you’re out on tour. Shrine became a sort of a vessel that we were able to turn to [to put those darknesses into] over that period. It was a cathartic process.”

BFW have always striven for a timelessness in their music, but this record’s willingness to address those struggles and anxieties head-on lends a sense of thrilling relevance and relatability that will speak to the legions of new fans who’ve joined their cause of late, and many more still to come. Third single Stand Down was inspired by the increasingly polarised global political situation over the past few years but it felt chillingly prophetic when its release coincided with Russia’s invasion of Ukraine. Sovereign plays on certain members’ passion for the Scottish Independence movement (see also: the ‘END LONDON RULE’ backdrop deployed at Bloodstock) but will surely strike a chord with anyone sick of being strung-along by the current generation of uber-corrupt politicians. The aforementioned Levitate is a touching exploration of Scott’s experiences seeing his grandmother suffer from dementia.

“This is us baring all,” stresses Ali. “It’s about connecting with people on that human level. The more we share of ourselves, through our lyrics, the greater the potential is to resonate.”

“If you’re singing about something that means something to you, you put so much more into it,” nods Scott. “It’s about coming from that personal place, having learned to navigate situations and to overcome them. Hopefully if anyone else is going through the same they’ll be able to take some solace in it, too. That’s all you can ever really hope to achieve when you’re writing songs.”

Even more than that, Shrine is a monument to BFW’s journey to this point. As business picks up, it would be easier for the band to trumpet their ambitions to headline this festival or hit that spot in the charts. Other than pressing their desire to top the bill at their hometown’s legendary Barrowland Ballroom, however, these lads have little time for listing milestones they’ve hit, or those they’re keen to reach. Instead, it’s about sustaining the self-belief and slow, steady determination that’s carried them this far up the metal mountain, and being ready for what ups and downs might come.

“Ultimately, Shrine is about our devotion,” Ali signs-off with a mix of road-worn doggedness and evangelical zeal. “It’s about how we’ve given our lives to this band – literally more than half the years we’ve been alive at this point, constantly bettering ourselves along the way. After all this time, it’s a celebration of what we’ve put in to make Bleed From Within what it is.”

Shrine is released June 3 via Nuclear Blast. Bleed From Within will perform at Download Festival on June 11 – get your tickets here.