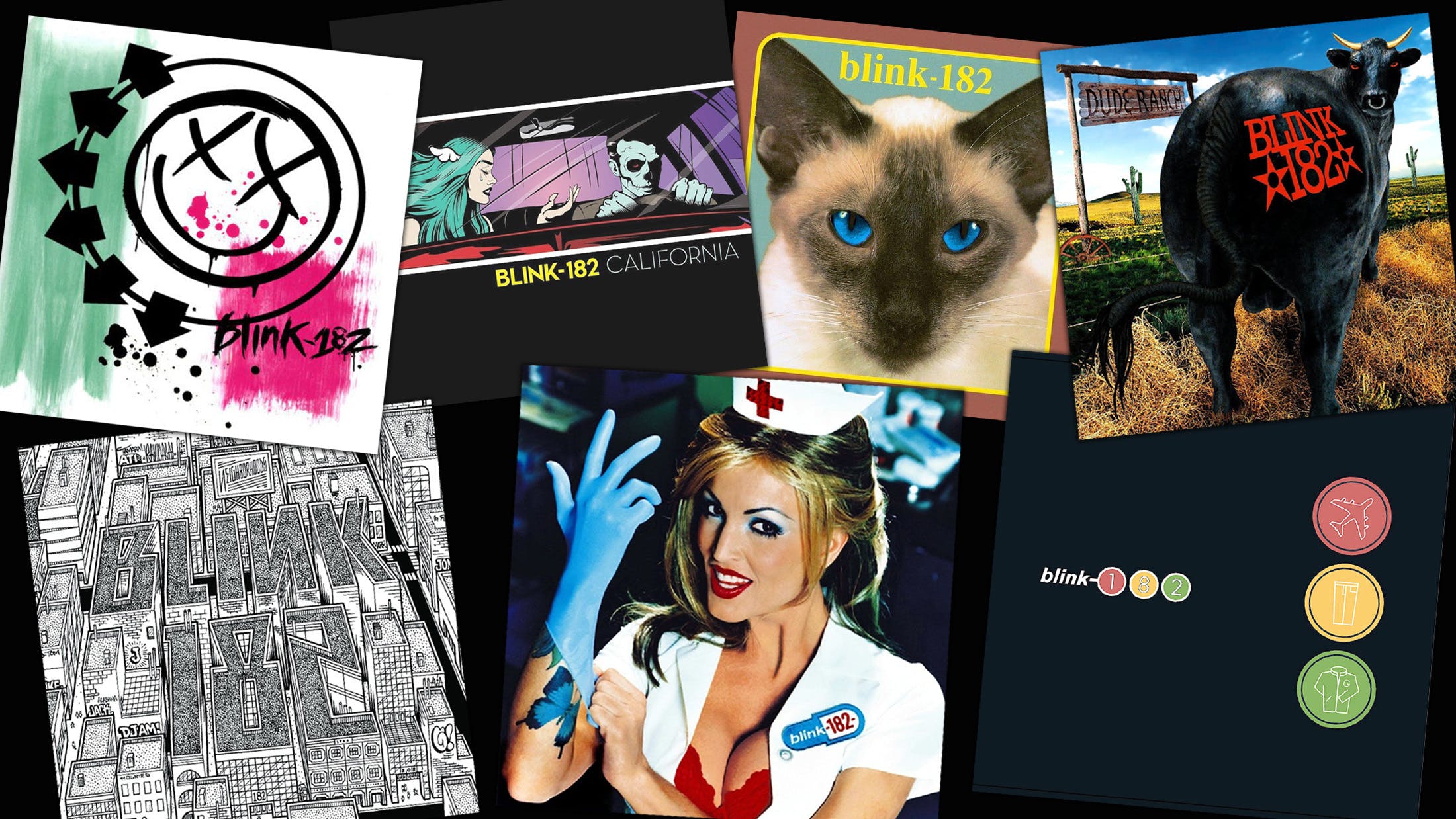 2019 marks 20 years since pop-punk legends blink-182 released their classic Enema Of The State album, with Mark Hoppus, Matt Skiba and Travis Barker set to mark the occasion by playing the record in its entirety at Back To The Beach in California this weekend.

Since coming together in 1992, the trio have become the definitive pop-punk band, and while others have gradually distanced themselves from the genre as time has passed, blink have always owned their roots as proud flag-bearers for the scene. They’ve had their fair share of drama along the way, but for over two decades, blink-182 have been at the forefront of Kerrang!’s world, amassing an impressive back catalogue in the process. But which of their seven albums is the best, and which is for pop-punk aficionados only? Read on for the definitive, indisputable ranking of each blink-182 album, from worst to best.

It wasn’t an easy decision to declare this as blink’s worst album, and there’s definitely a lot to love about Cheshire Cat, but listening to it, you can hear the sound of a young band still figuring things out. There are some unforgettable moments, like Carousel’s iconic bass-led intro and the wicked guitar line on M+M’s, plus a few hidden gems such as the awesome Fentzooler, but as a whole, Cheshire Cat doesn’t always hang together. It’s pretty frontloaded, too, but given that Mark Hoppus and Tom DeLonge were only 22 and 19 at the time of recording, we’ll forgive them the odd slip-up here. Despite its flaws, Cheshire Cat remains one of the most cherished records of the '90s pop-punk scene.

The band’s last album to feature original drummer Scott Raynor (who was kicked-out in 1998), Dude Ranch spawned one of blink-182’s most well-known songs and first taste of mainstream success in the form of Dammit, which has become a staple in the repertoire of many an aspiring guitarist. Another of the record’s stand-out tracks, the combination of snotty punk spirit and wide-eyed youthful abandon that is Josie, was an early career highlight for the band, whilst blink even wove in the occasional pop culture reference along the way on this LP, such as Star Wars-inspired love song A New Hope. Dude Ranch saw blink-182 teetering on the edge of pop-punk greatness, but it’s what was to come next from the trio that would truly change the game for not just their band, but pop-punk in general.

Alkaline Trio frontman Matt Skiba’s first album with the band, blink’s latest full-length bridges the spikey pop-punk of their youth with the more mature sound of their later material. Lead single Bored To Death features the three-piece’s best chorus since 2003’s Feeling This, whilst the likes of She’s Out Of Her Mind and Sober further demonstrate how Mark Hoppus and Travis Barker retain the knack for penning catchy rock songs nearly 25 years into their careers. San Diego, meanwhile, is a criminally underrated track that deserves more love, and as for closing-number Brohemian Rhapsody, that blink got away scot-free with those lyrics just about sums-up how loved the band are. 'There’s something about you that I can’t quite put my finger in', is how Hoppus brings California to a close, just in case you forgot. Give that man a Pulitzer.

Probably the band’s most divisive album, and their last with Tom DeLonge, Neighborhoods took the trio closer to the alt.rock sound of their then-vocalist/guitarist’s other band, Angels And Airwaves. Despite being maligned by some, though, this record showcases some of blink’s finest work: opening track Ghost On The Dance Floor is a wondrously haunting start to proceedings which sees Tom shine; Natives – complete with its killer 'I’m just a bastard child, don’t let it go to your head / I’m just a waste of your time, maybe I’m better off dead', refrain – is a killer punk song; whilst Hearts All Gone is a rip-roaring ride, and further proof that Travis Barker is the best drummer on the planet. Admittedly, it does sometimes become a little self-involved, but Neighborhoods remains a fine album that embraces the darker tone its creators established on their previous, self-titled LP.

Coming in at a respectable third place is blink’s final pre-hiatus album, which at the time was the band’s most mature and accomplished work. The sombre tone didn’t stop Mark, Tom and Travis from bringing the hits, however, with singles Feeling This and I Miss You two of the most popular rock songs to be released in the early-noughties. Taking inspiration from changes in their personal lives and the post-hardcore-leaning sound of Box Car Racer (the band formed by DeLonge and Barker following 2001 blink album Take Off Your Pants And Jacket), blink-182 opened up their sound and begun to experiment, in the process straying from their pop-punk roots and penning alt.rock numbers like Down and Always. The atmosphere in the band at the time might have been strained, but that tension resulted in yet another killer blink album.

Reaching the summit of the U.S. album charts and hitting the top five in countless other countries, Take Off Your Pants And Jacket was a runaway success for blink upon its release. A near-perfect pop-punk album, the band’s fourth record produced three massive singles in the form of First Date, The Rock Show and Stay Together For The Kids, the latter being a particularly poignant song for both Tom and Mark given they’d each experienced their parents divorcing in their youth. Chronicling tales of adolescent angst, album deep-cuts like Reckless Abandon and Everytime I Look For You should be required listening for any aspiring pop-punk band. Consistently catchy and expertly crafted, it took a special record to prevent Take Off Your Pants And Jacket from claiming the title of blink-182’s best album. Speaking of which…

Anyone attending Back To The Beach is in for a glorious treat this weekend, because not only will they be hearing blink-182’s finest record in its entirety, they’ll be witnessing a full play-through of arguably the best pop-punk album ever written. A generation-defining collection of songs that perfectly captures what it’s like to be young and dumb, Enema Of The State is the sound of a band ready to take on the world. From absurd tales of diarrhoea (Dysentery Gary) and UFOs (Aliens Exist) to rock club anthems like All The Small Things and What’s My Age Again?, Mark, Tom and Travis’ third full-length is a bonkers collection of songs no other band could’ve pulled off. A summertime, feel-good classic, and a huge step up from Dude Ranch, Enema Of The State remains a must-listen for rock fans of all tastes – even the most ardent of metalheads can’t deny how insanely catchy these tracks are. If you’re lucky enough to experience the 20th anniversary celebrations at Back To The Beach, spare a moment for your fellow pop-punks who can’t be there. We’ll be weeping into our pizza as Adam’s Song plays in our headphones, wishing we could get the hell out of our shitty hometown.