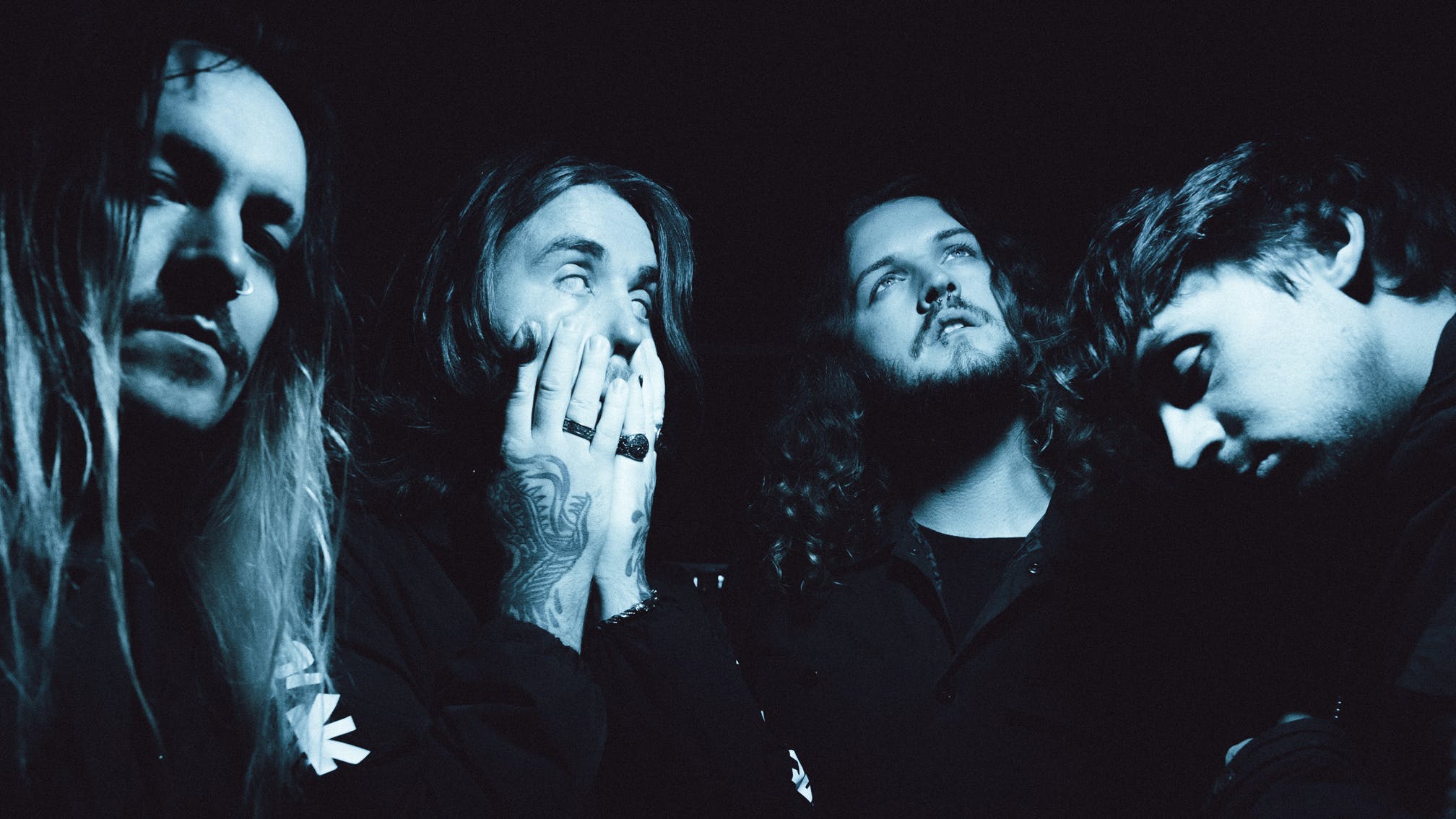 Following a period of reflection brought about by the pandemic and a family bereavement, Kaya Tarsus announced earlier this year that he was stepping down as frontman of Harrogate nu-metal favourites Blood Youth, with former God Complex vocalist Harry Rule joining as his replacement. On October 1, the band surprise-released their final album with Kaya, Visions Of Another Hell, a record which Kerrang! hailed as one that “balances brutality with intricacy with phenomenal results”.

Chris, what was your reaction when Kaya told you he was leaving the band?
Chris Pritchard (guitar): “We already knew that he was having a really bad time because of COVID and the loss of his father, but he wasn’t really talking to us – Kaya is a guy who likes to keep things internal. When he told me he wanted to leave the band it was like my world had finished, and there was definitely that question of, ‘Do we call it quits now?’ Eventually, I decided that we could carry on, but I wanted to make sure that Kaya was certain in his decision. We had some big talks about it and by the end I fully understood where he was coming from, and we all support him and his choice.

“It was tough because we grew up playing music together – before I was [old enough], I was sneaking into bars to watch his local bands play. [Our bands] would play together all the time, so when he said his time in Blood Youth was done it felt like the end of an era. That said, we’re still brothers, we still hang out and he’ll even still come to rehearsals. Kaya needed to step up and take care of his family and his mental health. He’ll always be a part of Blood Youth.”

Why did you approach Harry to be Kaya’s replacement?
Chris: “He’d played with us before in his old band and I’ve always considered his vocals to be on another level to everyone else in the scene. I remember God Complex playing with us in Manchester on the Starve tour in 2019 and seeing Harry doing these crazy screams – all I could think was, ‘I want to work with someone with that power one day.’ He was always my first choice to replace Kaya, but I didn’t want to rock the boat with God Complex. When I found out they’d split, I got on the phone to him immediately. We had him and one other person audition: the first guy sent us this incredible edited and produced audio that was full of crazy harmonies, whereas Harry’s was a one-take rough clip, but it was stacked with potential – I just loved that mentality of, ‘One take. Done.’ I loved the confidence, as well as the obvious vocal ability. It ticked a lot of boxes for us.”

Harry, does it feel strange to be joining the band at a time when Blood Youth are promoting an album that you’re not on?
Harry Rule (vocals): “I wouldn’t say strange, but it’s certainly different. It is what it is – there’s no defined rulebook as to what a band needs to do when they release an album. At the end of the day, Kaya is a part of Blood Youth, and now I am too. Just because I’m not on the record doesn’t mean I shouldn’t own it, promote it or be proud of it. Blood Youth is my band, whether I’m on the record or not. Even the old stuff and the EPs – that’s my band.”

Why did you decide to do a surprise release for Visions Of Another Hell?
Chris: “We recorded just before COVID hit and produced the album throughout lockdown. We were lucky to be in a position where we didn’t have any timelines to adhere to or anything, so we thought we’d bide our time, put a ban on social media and watch what other bands were doing, which would give us a better idea of how to run an effective campaign in the COVID climate. Something we were noticing was that bands were dropping a song and then things were quickly fizzling out because there were no shows or appearances to promote it. We didn’t want to put ourselves in the position of booking in tours and video shoots and then end up not being able to do them. The thought ended up being, ‘We’ll release a single, and if that goes well we’ll release another, and then we’ll drop the album,’ and it seems like it’s worked. Even the change in vocalist hasn’t hampered us – our fans have been so welcoming to Harry, and I think a big part of that is because they know Kaya will always be a part of Blood Youth. Harry joining us simply allows Blood Youth to get to the next level and kickstart a new era.”

Harry, what was your reaction when you first heard the record?
Harry: “When Chris played it for me I had ‘bass face’ for track after track because I was so buzzing with it. I come from a background of heavy genres like deathcore, hardcore and the darker, grimmer sides of metalcore, and I’m not saying I didn’t think Blood Youth were a heavy band – because Starve is a hard fucking album – but Visions Of Another Hell is on a different level. Plus, all the electronic elements really reinforce what is going on in the music, and give me visions of late-’90s nu-metal and that entire explosion of biomechanical fucking darkness that happened. There's loads of really gnarly bits, loads of bell blast rides and lower-end-of-the-fretboard breakdowns and riffs – the whole thing just sounds awesome. When I first heard it, I kept having to replay stuff so I could listen to sections again. I always knew it would be a great record, but I’m even more impressed than I thought I would be. Having now played my first shows with the band, I’m on such an unbelievable high unlike anything I’ve felt before. Things are going really, really well.”

Blood Youth’s album Visions Of Another Hell is out now via Rude.