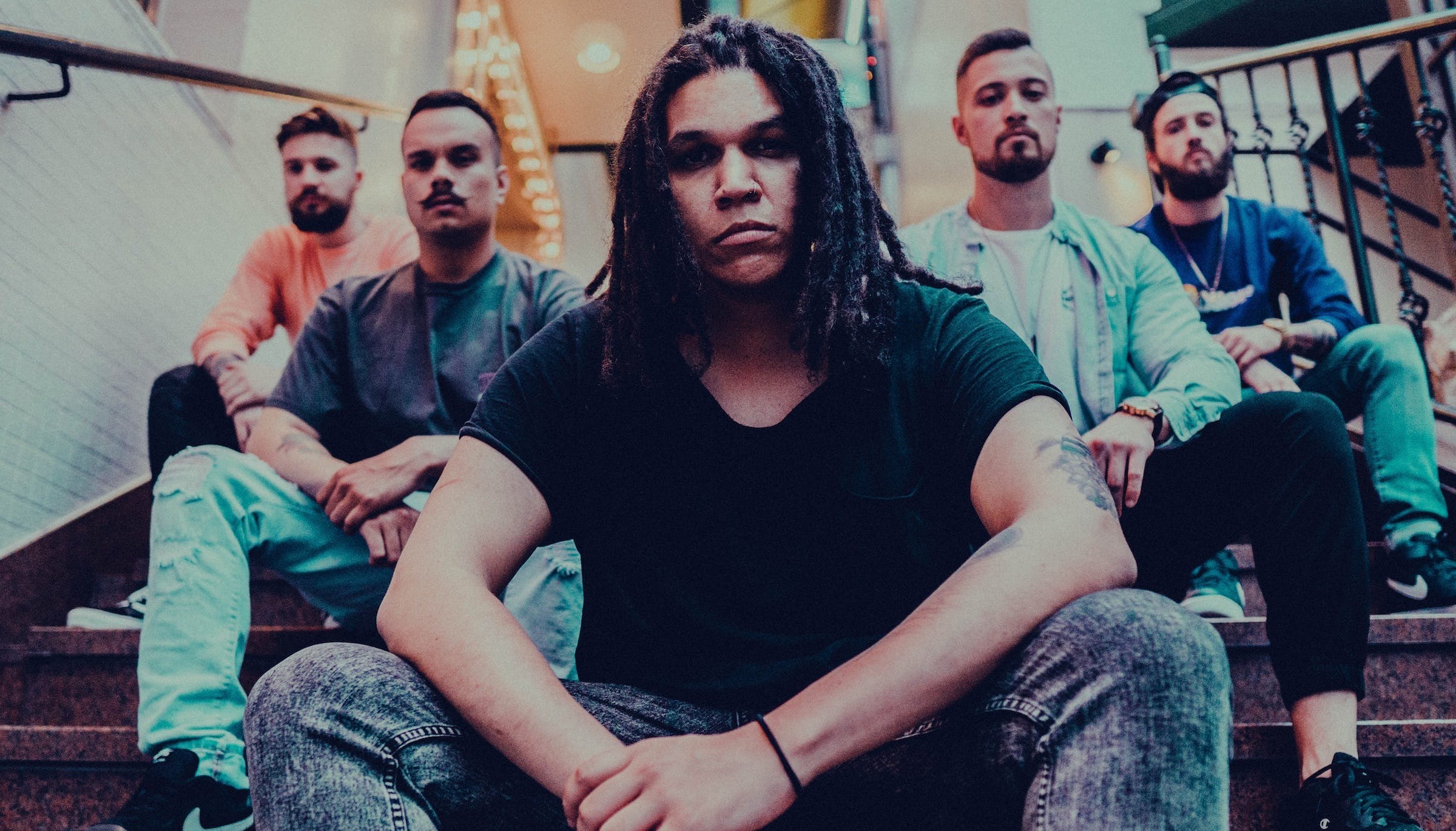 When asked why he decided to form a brutal deathcore band based on cult manga/anime series Berserk, Brand Of Sacrifice vocalist Kyle Anderson answers with the assuredness of the series’ Jesus-gone-Judas figure, Griffith: “It’s the death metal of anime!”

The band's new album, God Hand, forgoes the mythical majesty of the aforementioned military leader, instead reflecting his foil: seemingly unassailable warrior Guts, whose brutal methodology and rage seethes from every blast beat and breakdown. The subject matter simply fit better with Brand Of Sacrifice than The Afterimage, a progressive metalcore band comprised of the same members, and with whom Kyle initially planned to do a Berserk-themed song.

For the vocalist, the decision to move forward with an entire band based on the anime came when he noticed other themed projects, notably the Halo-centric Shadow of Intent and Veil of Maya’s nods to series like Attack On Titan, Game Of Thrones, and Final Fantasy.

The idea for the project had been steeping in the 28-year-old’s mind for nearly half his life since he first watched the 1990s anime adaptation of Berserk at 16 years old. Seeing the Eclipse, an infamous climactic episode, right before a shift at his first job at a pizza shop left the teenager “rattled the whole night.” That cataclysm finds an eviscerated Griffith betraying his disgraced army in order to ascend to the rank of God Hand: a quintet of demonic deities who execute the will of the world. In order for this to happen, he severs his last ties with humanity by marking his loved ones with the band’s namesake, leaving them to be victims to hell's apostles.

"I knew that there was going to be supernatural stuff, but you didn’t know when it was going to hit you, and it was mostly the betrayal from Griffith and the way he treated Casca in the anime, just to get back at Guts, as he can’t do anything: the feeling of hopelessness," says Kyle. "Obviously the rape is rough to see, but you feel just as hopeless as Guts does when he’s being pinned down by demons and he can’t do anything -- and he’s missing a limb and an eye at that point.”

The album’s lead single, Divinity, deepens the band’s ties with the series in ways not present on their debut EP The Interstice. Like Easter eggs in a video game, knowledge of Berserk's plot points elevates a screaming sample to more than just musical enhancement. The fearful cries that fill out an atmospheric build-up serve as an aural representation of those killed during the Eclipse. The connection is furthered by the lyric, “Tear them limb from limb as a tribute to the almighty God Hand.”

The fact that guitarist Michael Leo Valeri’s shrieking sonic hellscape fit with the series was a happy accident, as Kyle is the sole student of Kentaro Miura’s epic tale in the band. The shredder, who also engineers, mixes and masters his recordings, recalls thinking the part sounded cool but wasn’t quite at its full potential.

“It needed something more, something a little bit more hellish and doomy sounding," says Leo, "so I just popped a screaming sample in and distorted it all crazy. It definitely matches the undertone of what this band is inspired by, for sure, but it just kind of happened naturally.”

Actually, everything for this band has happened naturally, including their signing to brutal death metal/deathcore tastemakers Unique Leader Records, which occurred after a meme-gone-viral generated hype for the band.

An offer for The Summer Slaughter Tour came through the night before its announcement, with Brand Of Sacrifice having to confirm within the hour. Fortunately, Anderson was on his computer at the time. On top of all that, God Hand debuted at 20 on Billboard Heatseekers chart. To follow the series’ overarching concept of destiny, it was fated to be. Sonically, Brand of Sacrifice’s darkness is an amalgamation of aspects from many of Summer Slaughter's veterans -- Beneath the Massacre’s technical deathcore, Devourment’s slam death metal, and the skronky noises and squeals of The Tony Danza Tapdance Extravaganza.

“Death metal has very similar themes as well, talking about the abyss and demons and stuff like that,” says Kyle, who pulled from the series’ mythos for their release’s artwork. The cover of their EP is an artist’s take on creatures from the manga, with the snowy landscape acting as a nod to the frigid nature of the band's home country of Canada. The God Hand cover takes things one step deeper as a recreation of a specific scene during the Eclipse, wherein one of the sacrificed characters is hugging a beautiful woman who transforms into a hideous creature.

Though the supernatural is what drew the vocalist to the series in the first place, the series’ all-too-human nature is what really kept him around: "This is going to sound really juvenile and silly, but I was looking for the most violent anime on Google when I was in high school. That’s how I got into it, and then I ended up falling in love with the character development and how much depth the series actually has, more than the violence and gore associated with it."

Similarly, audiences at The Summer Slaughter Tour might be drawn to the bludgeoning noises coming through the speakers, but will find even more to latch onto when they sit down with headphones and hear the brief reprieves from the onslaught in the form of airy interludes. One of these, After Image, is the band’s take on Guts’ theme from the 90s anime. The name is an obvious nod to their past, the demise of which is foreshadowed in the video for The Branded via the captive casualty’s shirt.

Watch our exclusive stream of The Branded below, complete with this article's author as the tied-up victim:

Make sure to check out Brand Of Sacrifice on The Summer Slaughter Tour with Cattle Decapitation, Carnifex, The Faceless, Rivers of Nihil, Nekrogoblikon and Lorna Shore. Remaining dates are listed below:

Brand Of Sacrifice unveil the next chapter of the band with new single Exodus, which Kyle Anderson says “examines the darkest aspects of what we as humans are capable of”.