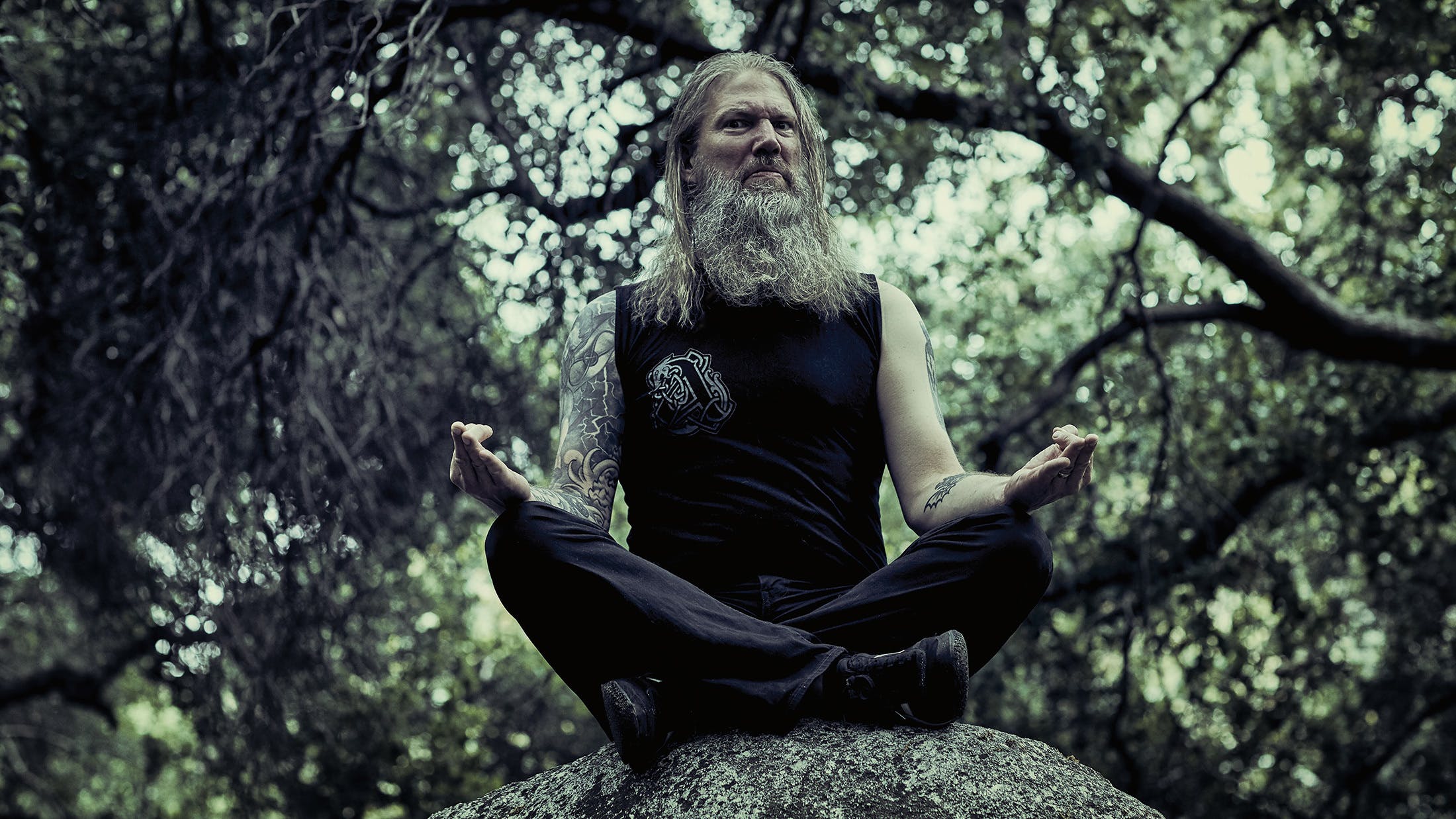 Johan Hegg lives with his wife in an old house surrounded by fields and farms. Based in the countryside of central Sweden, the couple’s nearest city is Örebro, with a population of around 140,000, just a few miles down the road. When Johan needs to travel into town, he does so in what he calls his “eco-diesel car”, a ride he describes as “not being super-good for the environment”. He mitigates this by quickly adding that he’s “going to get a new car next year – probably a chargeable hybrid”.

If the image of the singer with the world’s premier Viking metal band pootling about the Swedish countryside in a vehicle that requires eight hours’ charge before it can be used for a pillage seems incongruous, then think again. Johan’s fascination with the Scandinavians that dominated Northern Europe for 300 years from the eighth century onwards stems from his love of history, but parts of their way of life continue to resonate today.

“Originally I used my interest in Vikings as a way of writing some cool lyrics,” he says, “but the more I think about it, the more I realise that there’s more to it than that. The fact that they lived in simpler times is also an interesting aspect. If we all existed in the way that they did, it would be much better for the environment.

“Obviously we’re in a situation now where the environment is being affected by human activity,” he adds. “There’s no denying that, and anyone that tries to is wrong. We need to do something about it – fast. In the western world especially, we need to think about how we travel, how we consume, what we buy, and what we throw away. Everything from food to technology, all of that. We’ve really got to think about how we live our lives.”

On a personal level, Johan is doing his bit. Although not a vegetarian – a meat-free Viking? Imagine that – he has drastically scaled back his consumption of animal produce. This decision, he says, is good for both the environment and for his own concerns for animal welfare. When at home, he eats the wild boar and deer that roam the fields near his home, as well as other game sold from a nearby farm shop. Such fare, he finds, cooks up a treat with the vegetables he and his wife grow on their own land (the kale, he says, is particularly hardy, even in the grips of a Swedish winter). For visitors with a sweeter tooth, the pair also have their own apple orchard.

They also recycle, and not just in the usual way of staring in panic at the contents of a green bin as the dust lorry rounds the corner of the street. The Heggs buy only second hand or antique furniture. They’ve obviated the need for kitchen paper by cutting up and re-using tea towels. After 20 years of service, they only discarded their old television – an appliance that had developed the unhelpful habit of turning itself off at random – after doing some research and learning that its plasma screen was less environmentally friendly than a newer LED model. Naturally, the old TV was dispatched to a recycling plant that specialises in electronic goods.

Johan also pays a fee to a website that calculates the carbon cost of the flights that he takes each year and offsets them by planting new trees.

“In Sweden we recycle a lot, and in my hometown we basically recycle everything,” he says proudly. “The stuff that we can’t recycle, we compost.”

Are you hopeful for the planet?

There comes a mirthless laugh. “The planet will be fine,” he says. “It’s us human beings that face real problems.”

Okay, let’s rephrase that. Are you hopeful for the human race?

“I don’t know,” is the answer. “I think that humanity may be able to turn this around, but we’re definitely cutting things fine right now. I try to stay optimistic. For my sake, it doesn’t really matter. I don’t have children, so for me and my wife I don’t think we’ll have to live through what’s going to happen to this planet if we don’t get ourselves in shape. But the next generation will have to. So it’s a question of what we’re going to do for them.”

In 2018, Johan went to see Iron Maiden on their Legacy Of The Beast tour. He watched as the metal legends opened their set with Aces High, and gazed in wonder as an almost life-size model of a Spitfire hovered above the stage. “I thought, ‘Wow, that’s fucking cool,’” he says, “and that’s what we want to do, albeit on a slightly smaller scale.

“We’re children of the ‘80s,” he explains. “We grew up watching Iron Maiden, Metallica and Judas Priest – all these bands were entertainers, and that’s what we want to be, too. We want to have a good time with the people who come to the shows, and we’ve always felt that way. We’ve always tried to build on that. It’s one of the reasons that people come to our shows. Just because it’s the most brutal music you can think of, as a metalhead I want people to have a good time when they come to our shows. I want to come away thinking, ‘Wow, how cool was that! That was awesome!’”

Naturally, for a band of their size, Amon Amarth travel via bus when on tour. It’s just one part of a caravan that comprises five production trucks packed with pyrotechnics, lighting rigs, a backline, and every other accoutrement of the travelling rock circus. Since forming in Tumba in 1992, the international profile of Amon Amarth has increased to the point where the quintet – completed by guitarists Olavi Mikkonen and Johan Söderberg, bassist Ted Lundström, and drummer Jocke Wallgren – are now a worldwide concern. The band’s most recent album, Berserker, their 11th, charted in the Top 40 in no fewer than that 14 countries, a trans-global audience whose demands are being met on the current world tour.

Needless to say, Extinction Rebellion would have a field day with all of this. For his part, Johan takes a more nuanced and pragmatic approach to the complications of balancing the demands of the life he leads with the environmental concerns that are currently facing us all. He likes Extinction Rebellion’s ideological viewpoint, but worries that their disruptive approach will put off millions of people who need to be carried along as part of any sustainable environmental movement. He also hopes that people will think about how many children they choose to have, but is opposed to governmental legislation on the matter. Like all of us, he’s aware that the line between what people want and what they need is a perilous one.

At the moment Amon Amarth don’t offset the carbon footprint of their flights, but it is presently under discussion. Their singer is also aware that the question of selling merchandise is also “tricky”, but rightly points out that “this is a big part of a band’s income” because “nobody buys albums these days”. That these are problematic matters is beyond doubt, but to expect a band to answer these questions by shutting up shop is some way south of realistic.

“What we do does have a carbon footprint,” he says. “But it depends on how you see it. Yes, we’re on the road with tour buses and five trucks, but it’s also less of a carbon footprint than if all of our fans were to have to travel to see us play only in Sweden. It’s not terrible when compared to a lot of other stuff that happens in the world. It is a tricky thing, but at least we’re not flying around in private jets!”

Like all of us, surely, Johan is navigating his way through the minefield of modern life as best he can, while refusing to let the perfect be the enemy of the good. The fact that this is a deeply complicated matter is hardly his fault. It’s a jam we all find ourselves in. And if Amon Amarth are facing difficult questions regarding the sustainability of the lives they lead, in this they are far from alone.

“To me, being a metalhead is the best thing in the world,” says Johan. “It’s about being yourself, and being part of a community that stands together and expresses itself in its own unique way. That’s what I did when I was part of the audience, and that’s what I do now that I’m part of a band.

“I love what I do for a living and I want to continue doing it,” he finishes, with hope. “But I know that we have to take into account the needs of the environment as well. It’s something that I think about more and more, and it’s something that I’m looking at helping with. And although it won’t be easy, I’m optimistic that we can find a way through this.”