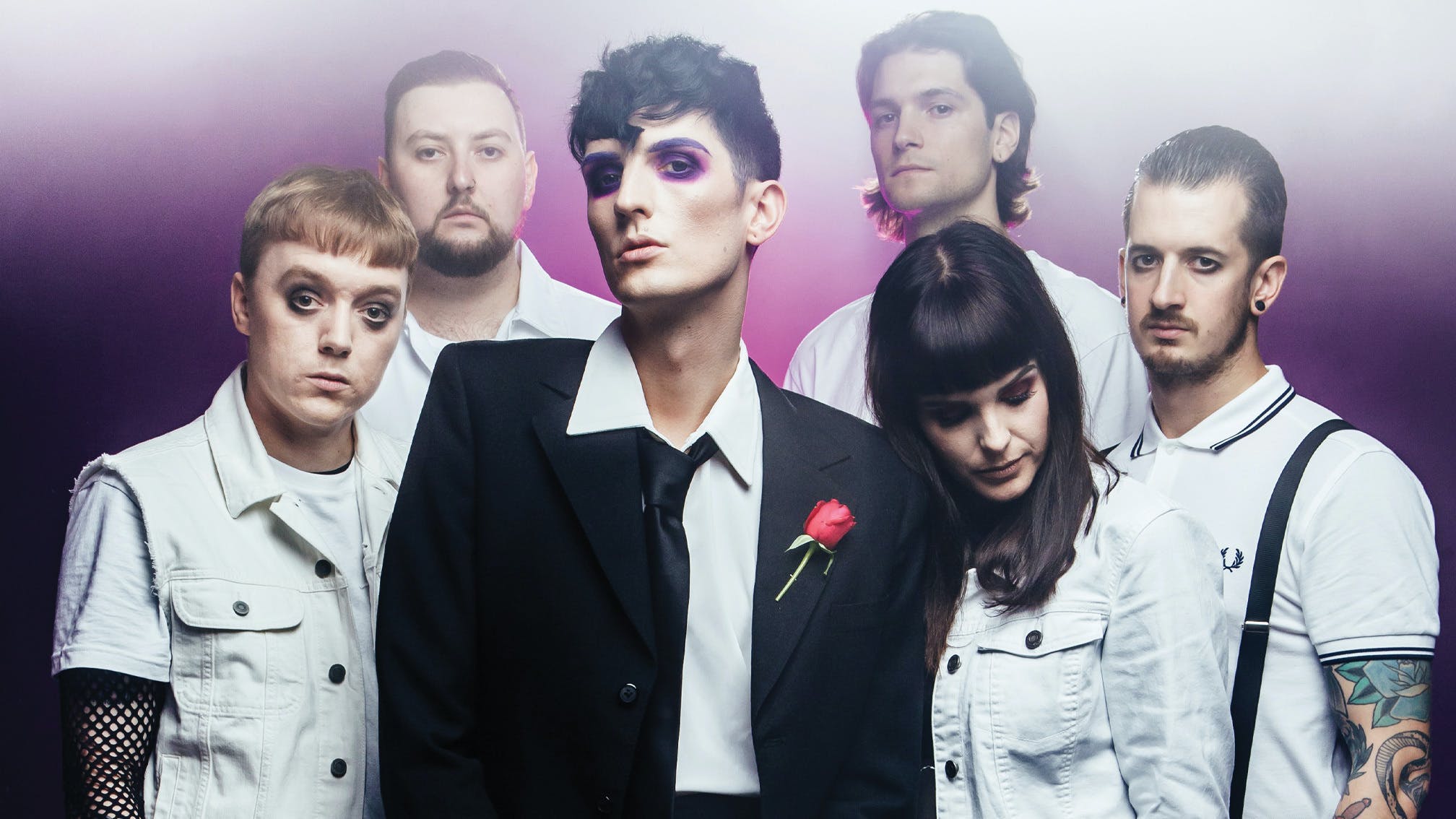 Creeper recently auctioned various items on eBay to raise money for the Black Lives Matter movement. Among them was a notepad in which frontman Will Gould had jotted his lyrics for the Southampton goth punks’ debut album Eternity, In Your Arms, which he’d read from while recording his vocals back then.

Digging out this book meant digging up the past, but also early glimpses of the future; clearly drawn on various pages was the lightning bolt motif that has come to define Creeper’s forthcoming second album, Sex, Death & The Infinite Void. Given how long the ideas for album number two had been percolating for, it’s little surprise that it’s turned out to be a dense piece of work, telling the story of the fictional town of Calvary Falls and its star-crossed main occupants Roe – who may or may not be a divine entity – and Annabelle.

With so much going on within the record’s world, then, we thought it best to have Will discuss some of the central characters and themes, to improve our understanding as we prepare to dive headlong into The Infinite Void. And for Will, this means revisiting episodes from his own recent past. “All of these things definitely have real-world counterparts,” he explains. “That’s how they’ve ended up in the narrative.”

“The titles of all of our releases, bar our self-titled EP, have had very specific meanings to us as the creators. But they’re also open to interpretation for the audience, as illustrated by the many ways in which people found significance in the title of our last album – Eternity, In Your Arms. I think this latest title is the most up-to-your-own-imagination of all of them. ‘The Infinite Void’ part of the equation will definitely mean something different to everyone who comes across it. Where does The Infinite Void go? When does it happen? Is it after death or between birth and death, and is something we stare into?”

“We were on the Waterparks tour in America, before or debut album came out, I think, and we stopped in a place called Dunsmuir, California. It’s still, in my head, the place this story happens. It’s beautiful, hilly, surrounded by lakes and full of these ‘Mom and Pop’ stores. I had to go into a diner to be sick, and the people in there looked at me like I was an outsider, which is how Roe is viewed when he arrives in Calvary Falls. I knew this was the America I wanted to show in my work. Then I asked myself, ‘So what’s the story that happens here?’ I’d seen this clip of [cult film/TV director] David Lynch talking about baiting your line and throwing it out to gather an idea, and then when you have it, you try and catch more ideas that coalesce around that central idea. That’s what we started doing once we had the setting.”

“I have a weird relationship with our main character, as I’ve obviously played him a lot recently in our videos. Our first idea was that we’d have actors play these roles like we did on the last album. But what we realised quite quickly about the last album was that some newcomers found the videos difficult to understand because they were these big narrative-led pieces. As a result, Hannah [Greenwood, Creeper co-vocalist and keyboard player] and I decided that we’d play these characters. If you find a body that can’t be identified, they call them John or Jane Doe. The name Roe came from subverting that name into a genderless, otherworldly form. I definitely see a lot of myself in the character, though Roe is pure and I don’t think I could ever have described myself as that!”

“Originally she was going to be called Bella, as we started out doing a kind of Beauty And The Beast story, but then we decided we wanted a more traditional name. Annabelle is the daughter of a jewellery shop owner in town, and trapped in a really difficult spot, given that she’s in a relationship with Buddy Calvary. Annabelle is engaged to Buddy, which her parents are all for, as he’s part of the richest family in town. While, as a man, it’s impossible for me to capture things from a woman’s experience, I’ve been writing musicals since I was a kid, so it’s about getting into a character and writing as that character, which Hannah and I were able to do.”

“A man – possibly from another world – is found, and he predicts that in seven days the world of Calvary Falls will end forever, and the man will return to whence he came. How many times in sci-fi films and literature in general have you heard of a story starting with a prophecy? As with the book/film K-PAX, there’s a question of whether this man, Roe, really is or isn’t from another world. Once Roe falls in love with Annabelle, his prophecy goes out of the window and his sin makes him human – though you’re still not sure if he was an otherworldly being or delusional. It leaves the story in a lovely state of unrest. All of the things Roe said would happen come true, but not in the way people imagined – much like, right now, the apocalypse everyone imagined probably didn’t involve them staying inside their house for four months.”

“Almost all of my work somehow relates back to the Bible, which comes from having gone to catholic school. When Roe and Annabelle meet, they have this illicit affair behind the back of Annabelle’s fiancé, Buddy. Roe doesn’t realise that he has to fall in love with Annabelle to fulfil the prophecy. Roe goes from being this pure figure to suddenly looking more and more human, much like the change you can see in me between our videos for Born Cold and Poisoned Heart. It’s about the sins of man, and recognising that humanity is fundamentally flawed, which is what makes us beautiful in a lot of ways. The sins of the flesh, lust and love, are mentioned a lot on this record. In this story, everyone ends up sinning.”

“Alcohol could be put under the header of ‘Sin’ too, I suppose, given that people drink wine, which some believe is the blood of Christ – while others drink for pleasure rather than for worship. There’s a tavern in Calvary Falls, Lulu’s Tavern, which has a broken neon sign that flickers on and off, so the lights actually spell ‘Lust’. The people of the town go there to cheat on their partners. Alcohol is very tied up in this story, as Roe goes to this place to drink, which makes him more human and more of a part of the town. Alcohol is a gateway for lots of us into the void – it certainly was for me.”

“Buddy is a very nasty man. He’s grown up as part of the richest family in Calvary Falls, and has grown accustomed to getting everything he wants, which means he can’t understand why he wouldn’t be able to possess the most beautiful woman in the town, too. Given that there was a Beauty And The Beast vibe early on, there is an element of [the film’s villain] Gaston about Buddy, though Gaston was this muscly, chiselled figure, while Buddy isn’t. He doesn’t have that many redeeming qualities: he’s trapped Annabelle in a loveless relationship, and in fact ends up murdering someone…”