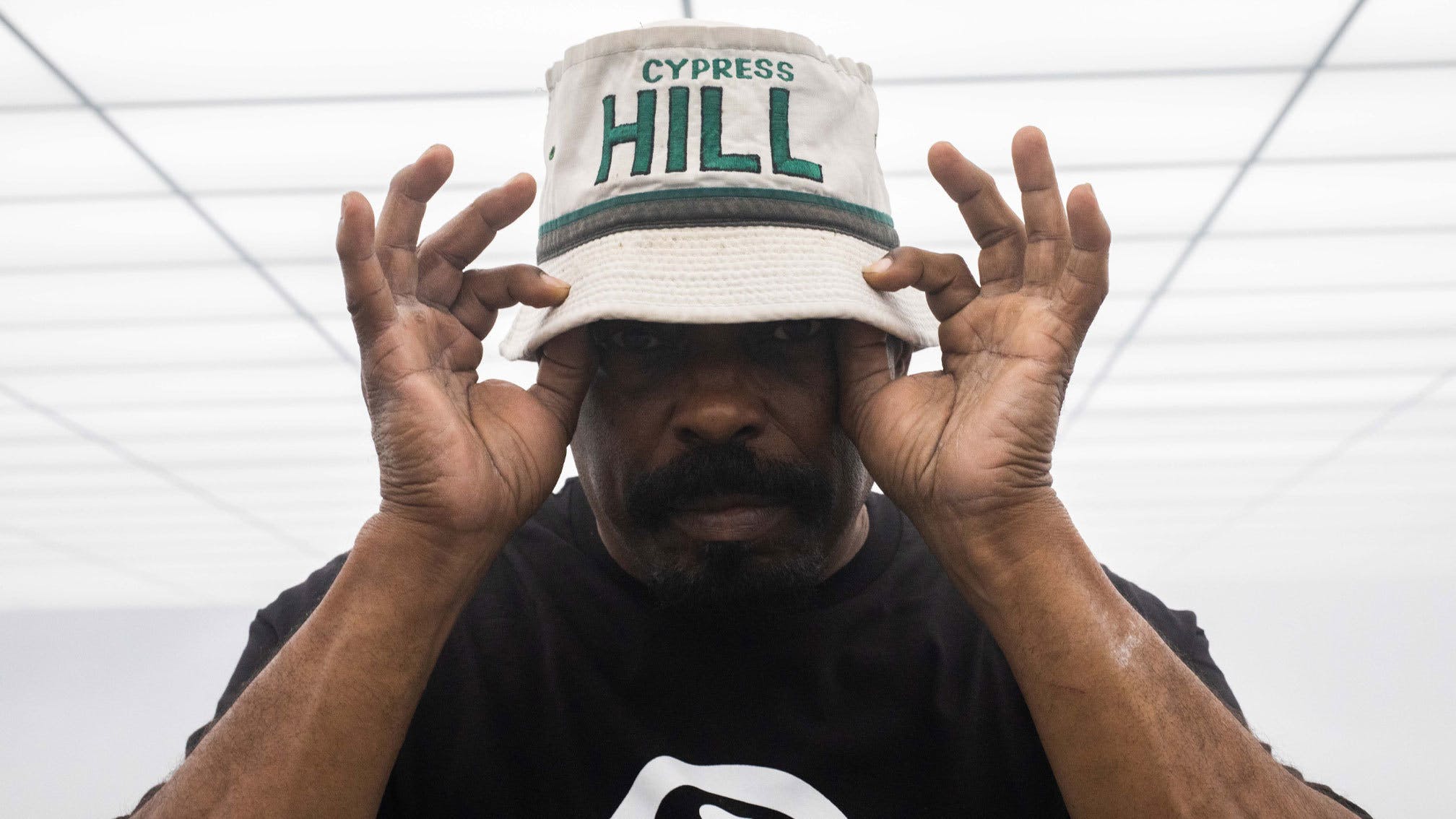 Cypress Hill were the first band to take hip-hop to truly colossal, multi-platinum mainstream success. For many people, B-Real’s nasal delivery is the one they associate with the band, but co-MC Sen Dog’s harder pneumatic rapping has always provided a vital counterpoint, even when it wasn’t centre-stage. So too did his powerful style also lend itself readily to metal, hardcore and rap-rock crossovers: first in collaboration with established acts like Biohazard and Hed PE and then with his own bands SX-10 and Powerflo.

With Cypress Hill’s 10th album Back In Black out now and Powerflo’s long-awaited second full-length also due later this year, Sen Dog – real name Senen Reyes – is showing no sign of slowing down just yet.

Here, he takes us through 10 tracks that have charted his rise as a hip-hop icon and crossover rap-metal star…

The song where it all started, later covered by Rage Against The Machine in spectacular style.

“This was the track that got us national and international attention. I remember when we made it, I felt like it was a really good song but we had one of our homeboys from the neighbourhood there and he hated the track. We were dropping him off back at South Central and he was talking shit about the song all day long. So we go around the corner and buy a 20 bag and roll a joint and and as soon as we put it back in it just popped off, the song was incredible. We just had to get that negativity out of our area and at that point I knew we were onto something special.”

The lead single from the album that made Cypress Hill global superstars.

“Unfortunately, I don't remember much about making this song. There were plenty of mushrooms around and plenty of herb and Olde English 800 malt liquor and whatnot. It was kinda like a haze. So I don't remember much about the process but when we listened to the album, that song stood out. Muggs [Cypress Hill producer and turntablist] used to make us work fast in those days. As soon as we finished with one song he had the next one up ready to go, so we didn't have the chance to reflect on what we'd just done. You didn't have time to fall in love with one song but Insane In The Brain became our biggest hit of all time.”

Sen Dog’s first real foray into the world of heavy music came via this guest appearance with Brooklyn bruisers Biohazard.

“This was my first time diving into metal and hardcore, and it's ironic because now one of those guys plays guitar in my other band Powerflo. Evan [Seinfeld, former vocalist] was going, 'You're gonna sound great on this, trust me,' and at the time I didn't really have my whole Sen Dog delivery thing down. It was something that I was still developing. That was the first time another band asked me to be on a song and I went, ‘Yeah, I'm with it.’ I was a fan of metal so I wasn't scared of it or wondering whether I should do it, I was just, ‘Yeah, let's do it.’”

Cypress Hill always had something of a rock crossover and the Skull & Bones double-album capitalised on that, with one disc showcasing their hip-hop style and the other exploring nu-metal territory.

“The first song for the album was (Rock) Superstar, which B-Real wrote. The album got sent to our label and Mr. Don Ienner, the legendary label head from New York, he heard that song and went, ‘First of all put some guitars on this song and get Sen Dog on it.’ And he was right. So from there when that song came out so good, a double-album started coming up. So we went and got Christian Olde Wolbers, who's also in Powerflo, and Dino Cazares was on there, and they wrote us some jams. It happened organically because if Donnie hadn't come up with the idea of putting guitars on that one song, who knows how it would have turned out? It was a piece of genius on his part that got that album rocking.”

The rapper’s first band that wasn’t Cypress Hill started by accident with this song.

“In the mid-’90s I kinda stepped away from Cypress Hill for a minute. That was my own fault; it was nothing that the band did or said to me or anything like that. My head was too cluttered with my own thoughts. I was still producing a band that didn't have a name and they had just fired their lead singer. One day I went to the rehearsals to tell them that without a singer I couldn't do this and they convinced me to go up there and mess around with them on the mic. I had written a song for Cypress Hill but we busted the rhyme and wrote that song Goin' Crazy the same day. They were like, ‘Dude, you sound good, you should be the frontman.’ I had no interest in being a frontman, but they talked me into it and that sorta saved my musical career, because at that point I just wanted out.”

The lead single from Sen Dog’s first and – so far – only solo album.

“Capo is an Italian mafioso term for the guy that's on top of the family, one of the captains. I wrote that song after watching an episode of The Sopranos on TV. That whole experience was difficult – I had a mild heart attack in the middle of it so I had to stop recording and come back to it once I felt better. But that whole recording was when I was getting a feeling for writing complete songs and it turned out pretty good. I don't think the video turned out as hot as I wanted but I still like the song a lot.”

Proving they were always up for trying new things, the band teamed up with British dubstep producer Rusko.

“I hadn’t heard of Rusko because I wasn't really into that type of music, but when I met him he had a bit of a wild side and I like that in people. So we recorded with him and it was just us trying to do something different and see how it came out. It came out incredible and we would even perform some of it during our Cypress Hill set. I'm glad we had the balls to take that position and it shows how we're never scared to cross our music with something else.”

“I was watching a show called The First 48 and I saw an episode with a person who didn't do any of the killing. He was under pressure and he helped somebody move a body and he got 20 years for just moving the body. That stuck in my mind and I started writing a song about being the victim of circumstance. Sometimes it's the circumstance itself that gets you into that shit. Other times it's not, you think you're helping somebody but really you're not, you're fucking yourself in the process. That's where the whole conception was born, from that TV show.”

Cypress Hill have a long track record of writing about drugs, but have rarely written anything more mind-bending than this…

“It was a very psychedelic record. When you work with DJ Muggs, you come into the studio and he’s already game-planning. He had written a bunch of tracks already and he had put a singer on that one, a girl named Brevi. So it was a basic matter of getting in there and writing some raps. It wasn't even like when we started where he'd have us do four 16-bar raps. Now it's more relaxed – do a four-bar, do an eight-bar, whatever, and we'll see what sounds good. So that song came about rather easily and I really liked the way Brevi sounded on it. Like I said, when you work with Muggs you gotta be ready for anything.”

More than three decades after their debut, the OGs return with their 10th album and Champion Sound sets out their stall.

“Champion Sound was the first song we did for the new record, and the approach was all about OGs in the game. We don't have to prove ourselves, we've been here, we've done it, it's no big deal. And we're coming back with the Cypress sound, the champion sound. We won with this sound over and over again. I don't think we're boasting, we're just laying down the facts: 'Foundation lane, we paved the way/ Remain soild while most just fade away.' There's hundreds of bands that have faded away in our lifetime and we’re still going strong.”

Back In Black is out now via BMG