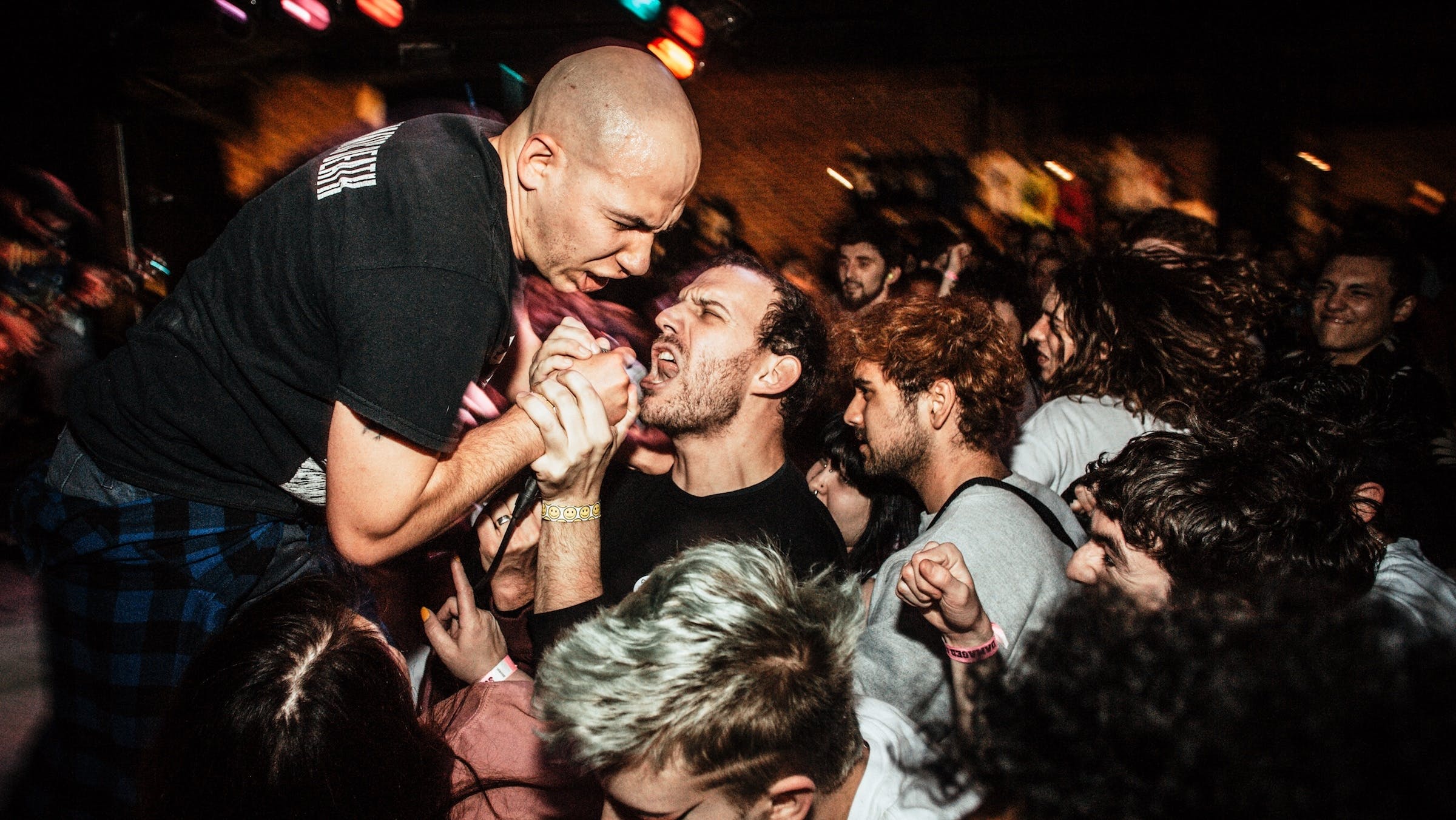 There’s a popular thread in the narrative of the history of punk: It generally starts with the Stooges and MC5, moves over to the New York Dolls, the Ramones and Blondie, and suddenly the Sex Pistols are playing Winterland. Cut to Mr. Rotten spouting, "Do you ever feel like you’ve been cheated?” and suddenly our ears are filled with the opening chords to Smells Like Teen Spirit and yeah, you do feel sort of cheated! Neither Nirvana nor Green Day were formed in a vacuum and here we sit decades after they blew up the world of rock music and the same punk world that nurtured them still not only exists, but thrives.

Damaged City Festival, anchored in Washington DC and now in its seventh year, paints an excellent and accurate picture of the current state of the underground hardcore punk scene. Founded by Coke Bust bandmates Chris Moore and Nick Candela, it was dreamt up while on a European tour through a series of discussions around the pros and cons around various festival environments they had participated in—while Washington D.C. has long had a storied history of hardcore punk (Dischord Records, Minor Threat, Void, Fugazi, Bad Brains, etc), there was a feeling of stagnation as bands on the touring circuit were skipping it over. The initial impulse could be characterized as a desire to both showcase the amazing bands and scene they had going locally while bringing in bands from all over the world which may have otherwise skipped D.C.. As Moore notes, "I don't want to say that this city needed something like this, but it just felt right."

From Despise You, Screaming Females, Krimewatch, Tørsö, and Haram to Inmates, Coke Bust, Night Birds and Hank Wood & the Hammerheads. It’s a state of the union of what is happening in the underground now, and it is apparent that state is good.

When Washington D.C.’s own Asesinato kicks off the fest, they are quickly followed by English hectic art damaged chaos of the UK’s The Wound, melodious punk rock of Swedes Rotten Mind, and the high octane jangly hardcore of Japan’s Milk. But the party doesn’t really get started until the Night Birds take the stage.

In an era when bands which have more in common with Slayer than Minor Threat are called hardcore, the Night Birds are a breath of fresh air. With the energy dial cranked to 1000, they explode onto the stage whipping the crowd into a frenzy with a sound that takes heavy cues from classic American hardcore—think Necros, think Adolescents—California beach punk on a date with Midwestern heavies getting crazy on the Jersey Shore. It is one of those transcendent moments which rock’n’roll can provide, where you don’t think you can get much higher but then Toronto’s S.H.I.T. take the stage, you do and it is just unreal.

For the unfamiliar, S.H.I.T. takes Discharge's notion of “noise not music” very seriously. Think if you will the blistering wall of sonic mayhem present in My Bloody Valentine’s Loveless but instead of presenting as a wall of melodic sludge it rips, thrashes and shreds at 3000 bpm. Taking their inspiration from a litany of noise soaked Japanese hardcore bands they stalk the stage with exceptional menace, inspiring a wall of diving maniacs slowing down only to occasionally catch their breath to mid paced Rudimentary Peni-inspired stompers like the track Losing in the 21st Century which rounds out their excellent recent album What Do You Stand For?

With sass and snark to spare, New York’s Hank Wood & the Hammerheads take command of the stage of DC’s Black Cat in a manner which echoes back to Washington legends Nation of Ulysses -- a high energy strut that has reverberates with bits of classic rock, r&b and smashes it through a sea of early 80s hardcore snark. A blend of shattered glass and sexual tension stirring the room into a stomping singular entity that closes out the main show but sets the stage for the utter pandemonium of the after show.

There’s something about seeing Oakland’s Tørsö on the last night of tour that finds them playing at the top of their game. They are a relentless a-bomb of power and fury. It’s the rare band that can go from playing house shows to big rooms and back but Tørsö is that group. Like Colombia’s Raw Brigade, who played earlier in the day, they represent a challenge to the traditional narrative of straight edge hardcore—one which is typically more concerned notions of purity and machismo, replacing it with a razor sharp assault of social consciousness presented at a lightning fast pace.

Haram are one of those bands destined for legend—playing an assertive and aggressive take on the form bringing to mind as much the chaotic herk and jerk of Crass as the more primitive side of early New York hardcore. Like Los Crudos before them, they provide inspiration purely in their existence—singing entirely in Arabic, the band becomes an expression of their cultural identity. Leaning heavily on tracks from their recent EP Where Were You on 9/11?—the tension and frustration of being Muslim in America in the light of that September day is manifested in the music they played. Vocalist Nader stalks the stage-lunging twisting and swirling occasionally vanishing into the crowd below removing the barrier between observer and performer.

Just over a mile up the street from the Black Cat, the Pinch is a tiny basement venue getting well overstuffed with just a 100 attendees. While it would be reasonable to expect these shows starting at midnight to be a bit more mellow, nothing could be further from the truth. While better known bands like power-violence inspired ragers Regional Justice Center and New York City’s Krimewatch can certainly turn the cramped space into a sweatbox, the experience of the chaotic 20 minutes of Houston’s Sex Pill filling the room with their stomping, Chaos UK meet Disorder style of primitive hardcore is something that is almost hard to believe. Have you ever seen those videos of Agnostic Front playing CBGBs where you can’t tell the band from the crowd and people are doing dives, flips and generally acting the fool regardless of the presence of a stage? Seeing them is like that but crazier as they transform the cramped cellar into a sauna of joyous mayhem.

What makes punk special is not just the music or the words but the culture around it, it's also the do-it-yourself ethos paired with a push to create an alternative and independent space for creativity in spite of mainstream whims. Nothing helps to drive this point home more than events like Damaged City. The network of friends that popped up in the 80s to provide a backbone of support to the burgeoning hardcore punk scene continues to thrive today as much as it did decades ago—promoters, promoters, zines, photographers, record labels and more doing it out of love to create a vibrant culture where artists can experiment, grow and thrive.