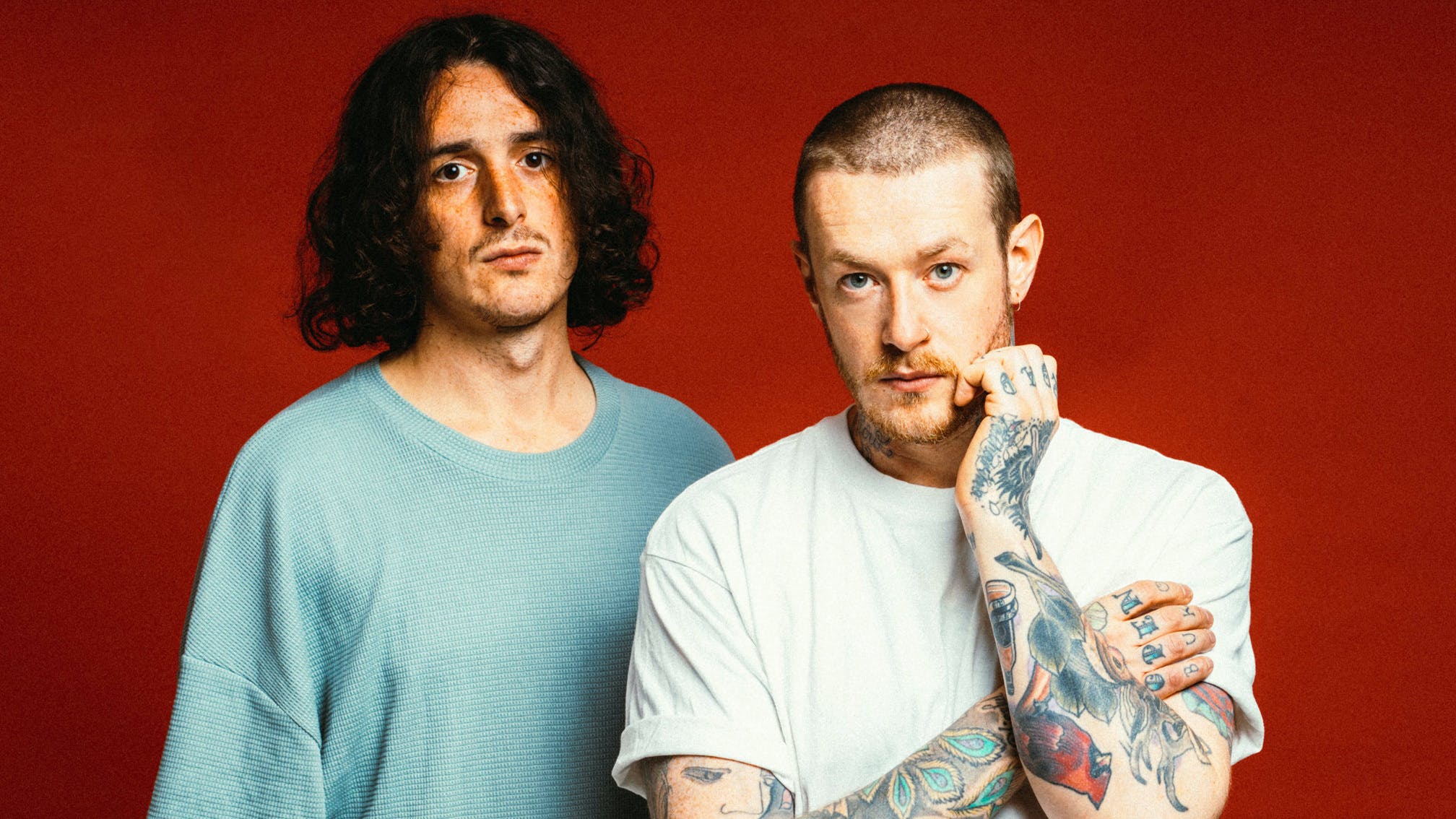 In January 2020, Deaf Havana were done. Nobody in the band was happy, frontman James Veck-Gilodi's drink and drug use was out of control, and him and brother/bandmate Matty weren’t even on speaking terms. With COVID-19 cancelling the only shows they had planned, all signs pointed to ‘probably best to just sack this off’.

But, after an entire year of not speaking, and several AA meetings for James, a casual “Can I borrow a mic?” text reunited the brothers, who soon found themselves in the studio ready to record one last song. But that song turned into two… then three… then four, and they ended up leaving with an entire album (their sixth).

Titled The Present Is A Foreign Land – and launched with lead single Going Clear – the record is out on July 15, and marks a rebirth for the group, who’re continuing on as a duo after the departure of drummer Tom Ogden and bassist Lee Wilson.

Kerrang! caught up with the Veck-Gilodis to find out just how they turned things around...

Welcome back, guys! You’ve had quite the couple of years. How are you feeling about the new album coming out?
Matty: “It feels really weird that people are about to hear stuff. I feel quite apprehensive because it’s been such a long and odd journey to get to this point. We finished work on this record in June last year, so the thought of people hearing it and us having to do stuff [tours, promo] is making me really anxious.”
James: “I'm not anxious in a bad way anymore – I'm just excited. I'm bored, so I just want to do stuff now. I'm ready to go! I don't really have a life anymore, so the sooner we start doing stuff, the better.”

Take us back to January 2020, when you were done and ready to walk away from Deaf Havana forever…
Matty: “The second half of 2019 was hard on all of us. We had a long tour around Asia and Australia, which should have been great, but it was really, really hard. None of us were getting on and that was the one thing we could rely on in the past, that camaraderie, and we didn’t have that. There was animosity. We knew it was done, pretty much…”

Did you have a plan for what you’d do when the band ended?
James: “I didn't have a plan at all – I probably would have made some sort of music but it might have been shit, who knows. I wasn't really that concerned. I was drinking a lot at the time… Not that I didn’t normally, but I was drinking more than usual, so I wasn't thinking ahead to the next day. I didn't care, really. I was going through some stuff personally as well, and I was all over the place. I was using drugs too much, drinking way too much… I was just too drunk to give a shit.”

Matty, you ended up cutting James off completely because of his behaviour, and you guys didn’t speak for a year…
Matty: “Yeah, I got to the point where I needed to stop drinking and go to therapy, basically, and did that. And I just felt our relationship had become very strained. I thought, ‘I'm not okay with the way you're behaving.’ And I could either just carry on like everyone else did and ignore it and be like, ‘Yeah, that's fine.’ Or I could say, ‘If you're gonna act like that, see ya later!’ Which was probably selfish, but we're here now in a wholly different sort of light [because of it].”

Exactly! And James is sober now – what's that been like?
James: “I was completely sober for eight months, then I drank because I was like, ‘I want to see if I'm missing anything…’ and I'm not. It just made me miserable. Now I'm actually sober because I want to be sober. I was going to [AA] meetings – that was the only reason I managed to stay sober in the beginning. And I will start again. How do I fill my time now I’m not drinking? Well, I moved to the countryside and I've got a dog, so I just go for walks and I started boxing. Just loads of stuff I would never do before.”

Were you making the record sober?
Matty: “James was completely sober, yeah!”
James: “I had to learn to do everything again. I was drunk the entire time anyone ever saw me for the last 10 years, so it was very different. We got a lot more done and it was more like work. Well, it didn't feel like work, but our days were structured.”
Matty: “Yeah, there were no real hangovers and putting things off. So really it didn't take us that long to make and it was so stress-free because we just were getting a lot done!”

What have you learned about yourselves during this process?
James: “I've learnt I don't need alcohol to do the things I thought I did. It's harder, ’cause I'm way more anxious, and I’m nervous because I'm naturally just like that and I used alcohol to mask it, but I've learnt that it is possible to thrive without it.”
Matty: “I've learnt that you can actually do things in any part of your life to change positively. Just take those steps to get closer to the sort of person you want to be, as opposed to just getting drunk and whingeing about it like I used to!”

How will you navigate touring sober?
Matty: “I already did the [last tour during] the second half of 2019 completely sober and the first few shows I hated… but by the end of it I was just playing songs completely differently and having fun with it! I've never been the best singer, but it's so much easier to sing without booze running through your system.”
James: “I’ve never in my life played a show sober. I don't know how I feel about it; I won't be able to tell you until I step on the stage. It’s probably gonna suck for a bit. I used to see the show as an inconvenience. Honestly, it was just something that I had to get through so I could go to the party afterwards. Now I'm going to try and enjoy the music – before, I was just on autopilot.”

Obviously you’ll be showcasing tracks from the new album when you play Slam Dunk in June – what made you pick Going Clear as the first single?
James: “I didn't want to pick it! I think it's the most obvious, because it sounds like us. It’s my least favourite song on the whole album – I prefer others. Everyone's going to listen to that and go, ‘Oh he's glorifying doing drugs!’ But it's literally the opposite. It's an anti-drug song. It's about how much time and brain cells are wasted [drinking], and about finding out that those people who you think are your friends are not really. They are just people that use you. I used to hang around with them because it made me feel better about the fact that I wanted to get fucked all the time and so did they. So I was like, ‘If they're doing it, it can't be that bad!'”
Matty: “I think it’s quite a, sadly, relatable sentiment in there for myself, and a lot of people I know…"

The opening line on the record – on intro track Pocari Sweat – sees James sing: ‘I was on a bridge in Singapore thinking of jumping’. That's pretty powerful. What made you open the record with it?
James: “I actually wrote that in 2019, when I was in Singapore. And that was just a genuine thought process. The album starts off where Epiphany ends, which is the last song on [previous album] Rituals, so I thought it was just a cool [segue]. I couldn't write a chorus that was good enough to go with it, so I just thought, 'That's a pretty good intro to the album, and it kind of sums stuff up.' Plus, it's pretty dark. I wanted the first lyrics you hear to be pretty dark.”

While some of the lyrical matter is dark, there’s hope on the record, too…
Matty: “Yeah. Quite a weird, kind of miserable hope.”
James: “I think the whole album feels like that. In a miserable way it is pretty hopeful. For this record I wrote about the previous year or so, which was the most miserable time of my entire life. But when I wrote the songs and put them into formation I was in a much better headspace. I was clear, and I felt hope for the first time in a couple of years. I feel like that’s what puts a hopeful spin on it.”

What was the best thing about making this record?
James: “That there weren’t any expectations. Mike [Horner], the guy recording it, was doing it on good faith because we didn't have any money! We had no deal in place, nothing… so we had no idea what was going to happen. We just knew we had some decent songs we wanted to record.”
Matty: “That was really freeing because it meant we just did it for us.”

And what do you hope people take away when they listen to the album?
James: “I just really hope they like it (laughs).”
Matty: “Yeah, I really hope people take to it massively. But because of how it came about, the record has already fulfilled its purpose for us. We made it for us, so anything that comes now is a bit of a bonus. Whether it flops or not doesn't matter to me.”
James: “I hope people love it, and I hope it connects with them. This is the first time I've really, really wanted to be in this band, which sounds mental because I'm 31 and it's a lot of albums down the line… but I just hope that people keep listening and keep coming to shows so we can continue to do this.”

The Present Is A Foreign Land is due out on July 15. Before that, Deaf Havana will play Slam Dunk Festival on June 3 – 4.