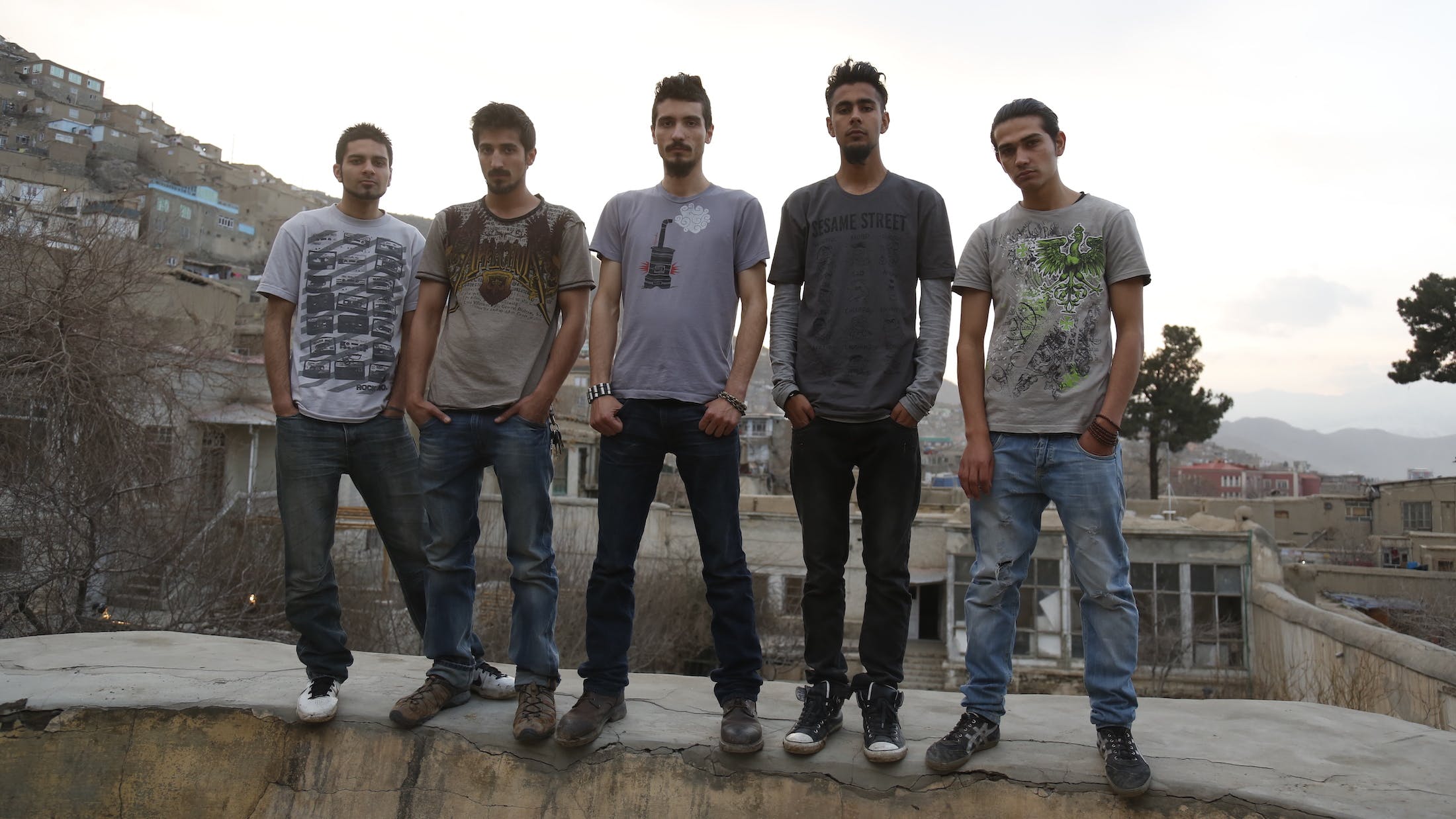 “That music is not allowed. Look, if you listen to this ridiculous music, flames will come out of your ears on Judgment Day. It is permitted to kill people who choose this path. They have abandoned Islam and chosen the Infidel’s path. If Allah was to deliver them to us, we would throw their meat to vultures, and hang them from the trees.”

These chilling words, spoken by a Taliban judge, introduce Rockabul, a new documentary film telling the story of District Unknown, Afghanistan’s first and only heavy metal band, as they fight for their right to rock against the backdrop of war and Islamic terror in the nation’s capital, Kabul. Billed as “a coming of age documentary which deals with youth identity and freedom of expression”, the film, directed by Australian journalist/musician Travis Beard, depicts the band’s struggle to be heard in an ultra-conservative society where the simple act of strumming an electric guitar in public could result in imprisonment or death. As the story begins, in 2009, keen metalheads Lemar (vocals/bass), Qais (guitar), Qasem (bass) and Pedram (drums) have no idea how to even tune their instruments, but DU persevere to the point where they become the star attraction at Afghanistan’s first music festival in 35 years, an event which imperils both their own safety and the liberty of their families. Offering perspectives on Afghan life rarely depicted in the Western media, Rockabul is, by turns, hilarious and harrowing, inspiring and chilling, setting mundane details of band life – rehearsal room arguments, line-up changes, unlistenable jam sessions – against a backdrop of bombs, bullets and ever-present danger.

“Maybe this country is really fucked up,” one band member notes in a voice-over. “Maybe it is really broken, and it’s damned and it’s cursed, but it is still my own country, you know. It’s where I belong… If we are not talking about who we are and if we are not expressing ourselves, then we are dead.”

Faith No More bassist Bill Gould is the film’s Executive Producer. Speaking to Kerrang! from Detroit, where he’s set to play a gig as part of MC5 guitarist Wayne Kramer’s all-star ‘MC50’ band, Gould hails District Unknown’s “fearlessness” and describes the film as “an incredible resource, part of our musical history.”

How did you first come to get involved with Rockabul?
Bill Gould: “I’ve read a bunch of books on Afghanistan and I’ve always had a fascination with the country. So then I was at a music awards ceremony in London and I met this guy who said, ‘Hey, I was in a band in Afghanistan and I can’t believe I’m here’ and so I started pummeling him with his questions. I’m a rarity in our band in that I actually enjoy going to awards ceremonies as it’s a chance to catch up with people I haven’t seen in a long time, and this guy was so excited and wild-eyed and clearly out of place that I thought he’d be fun to talk to. So then I learned that there’d been a documentary made about his band, and I got in touch with Travis, the guy who made it, and basically offered to get my hands dirty and help out with getting the film out there.”

What was it that attracted you to the story?
“Well, I mean, you’ve got to think that Kabul is maybe the least rock’n’roll-friendly place on the planet, and here you’ve got these kids trying to start a metal band. When I first started playing rock music, there was still some danger to it, some sense that you were stepping into the unknown, and I feel like I miss that a little bit. And these guys kinda had that spirit, but taking it one thousand times further.”

In practical terms, what were you able to do to ensure that the film got made?
“I hooked Travis up with some people that could help, like a really good film editor, and tried to help facilitate certain things. With most films the Executive Producer is the person who stumps up the money, and I didn’t really have that relationship with the film, but as this is the first film I’ve been involved in, it was really educational for me to try to help it come to the screen. Basically I really liked the film, so I want to get it seen by as many people as possible.”

The official trailer for RocKabul

Your record label, Koolarrow Records, has always shone a spotlight on music from countries which aren’t traditionally known for rock music, so in some ways is your involvement with Rockabul an extension of that mission?
“Yeah, it’s consistent with that. Outside of Faith No More I’m interested in bringing art to people from places that struggle, in order to offer perspective to people who don’t struggle, who might actually learn something, to break through this one-dimensional view of music that we all suffer from. I’m guilty of that too, so it’s good to be reminded of the challenges others face.”

On a musical level, what did you make of District Unknown?
“Well, to me they’re a band that’s very naïve, very innocent and very rough. But, if you consider that when they started out they didn’t even know they had to tune a guitar, I give them a pass, they get an A+ for effort. There’s kind of a fearlessness to their music-making, and that coupled with the innocence really appealed to me.”

For anyone thinking about going to see the film, what would be your pitch to get them to attend a screening?
“I think that, even beyond the music, this film offers a really interesting perspective on what life in Kabul is like, away from what you see on the TV news and in Western media. Because Travis lived in Kabul for seven years it really shows what life is like out there for kids, and that perspective alone to me was super, super interesting. You also get to see what life is like for the NGOs in a warzone – there’s this alternate reality, where there are parties amid all the chaos – and you get to see what happens to people in a country when foreign governments pull out and take their money out. These are all ideas that we don’t often get exposed to, but this is how the world works.”

District Unknown at the South Asian Bands Festival in 2012

At the risk of serving up a spoiler, some members of District Unknown now live in the United States. Have you had the opportunity to meet with them?
“Yeah, I know Qais, I hang out with him all the time when I’m in LA. He’s a great guy. It was one hell of an adjustment for him to move to Los Angeles from Kabul. I took him to the NAMM show (a trade show for the National Association of Music Merchants, which features showcases and meet-and-greets with rock stars) just to blow his mind, because it’s so over-the-top and disgusting!”

So what’s the plan for Rockabul?
“At present we’re showing it some international film festivals and pitching it to others. And I’m 99% sure there’ll be a DVD release. I think this film is an incredible resource, it’s part of our musical history, a piece of the puzzle, and a great document. You see things that will resonate with anyone who’s ever been in a band, but in a totally different settings. In some ways it has a familiar VH1 Behind The Music-style pattern, but the context is like nothing you’ve ever seen before.”

For more information about the film, and details of screenings, visit the film's official site.