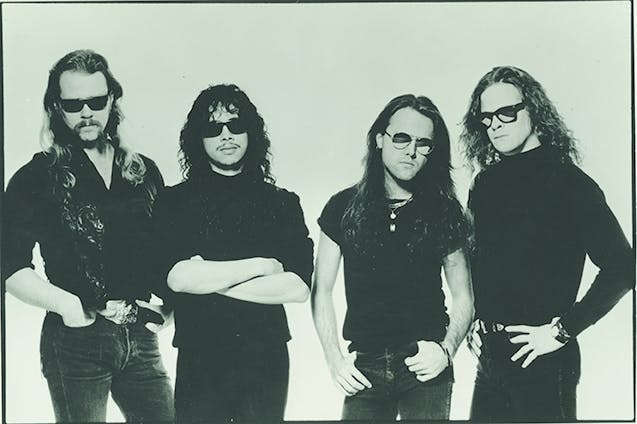 Few bands have made as much of a mark on the metal world as Metallica have – that goes pretty much without saying. But what's often missed in the appraisal of such feats is the profound personal impact bands like Metallica make on the lives of those who listen to their music - the fans. Here then, is one such example, courtesy of Kerrang! writer and Metallica obsessive, Simon Young. Enjoy…

As a 12-year-old with a paper round on a housing estate in Jarrow, Tyne and Wear, I had to spend my meagre earnings wisely. As a new convert to heavy metal, it wasn’t easy. Luckily, my mother ordered Kerrang! for me every week. Raw magazine came later, but only after convincing her that it wasn’t as salacious as the name implied. There were records to buy and the array of patches on display at Newcastle’s Kard Bar on Cross Street were all so tempting.

More often than not, my paltry wages went on fresh packs of blank cassettes. I went to a comprehensive school – scream for me… Hedworthfield! – where there were a number of metal fans in the years above, all happily copying classic albums for me to listen to. By the end of 1988, I had all of Iron Maiden’s back catalogue, a number of Ozzy albums and a lot of thrash. I remember the day my friend brought in a tape with an inlay bearing a spiky logo, rendered in biro: Metallica. Sorry Lars.

On side one was Master Of Puppets. On side two was Ride The Lightning. I was told to listen to them immediately, and when I did the tape didn’t leave my battered cassette player for weeks. Their logo was crudely added to my backpack, exercise books and I treated myself to a patch on my weekly pilgrimage to the shops. Along with Iron Maiden, Metallica were the other band deserving of my cash and a prominent feature on birthday and Christmas wishlists.

Two months after the release of …And Justice For All – November 5, actually – I took the 533 into Newcastle, marched into Windows record shop and emptied my pockets on the counter and bought the vinyl and drowned out the sound of fireworks popping in the streets outside.

Shortly before my father’s passing, we took a trip to the Metro Centre in Gateshead, where he bought me the One 12-inch. I can see it on my shelf from where I type this. I even washed his car so I could get extra funds to dash into town the following weekend after learning there was another version – a demo version in a gatefold sleeve with a bonus tour booklet – on sale for £1.99 in Hitsville in Eldon Square. It had sold out by the time I got there but later bought it off a friend for an inflated sum.

Metallica have been a constant in my life, thanks largely to a recurring nightmare after viewing a particular video. I first saw the band perform live at the Whitley Bay Ice Rink in October 1992 and have seen them countless times since, in arenas, at festivals and even at BBC’s Broadcasting House. I last saw them at Festival d'été de Québec last summer and the thrill of hearing Ennio Morricone’s The Ecstasy of Gold intro tape never, ever gets old.

Ectasy Of Gold into & Blackened

I religiously watched the A Year and a Half in the Life of Metallica two-part documentary, often attempting to play along on my bass. And the following year, after reading about a beast of a boxset in Kerrang! – the multi-formatted Live Shit: Binge & Purge – I made plans of how to afford it. Luckily, several shifts at McDonalds in town would take care of it – the paper round was a distant memory – and pre-ordered it at Our Price on the way to college in South Shields. I carried the thing like a fragile baby all the way home and spent hours examining the contents while I listened to their set recorded in Mexico City. I miss those pre-internet days of anticipation.

Thanks to landing my dream job at Kerrang!, I’ve had the honour of interviewing Lars Ulrich, James Hetfield, Kirk Hammett and Rob Trujillo. I’ve spoken at length about art and music with Jason Newsted, who even sent me a package containing his art exhibition brochure and picks, which is one of my treasured items.

Their longevity lies in their songs and dedication to putting on mind-blowing shows night after night. Their off-road adventures – whether it’s making big budget films, documenting behind the scenes rancour or releasing challenging collaborations – make have wrinkled some noses in recent years, but hats off to them for making things interesting for themselves and their fans as they approach their 40th anniversary with no signs of slowing down.

One day, Metallica will cease to be, whether they adopt the current hologram trend or not – and they probably will, when their bodies can’t cope with the demands of playing Blackened in their ’80s – and that, my friends, is a sobering thought. Long may they reign.