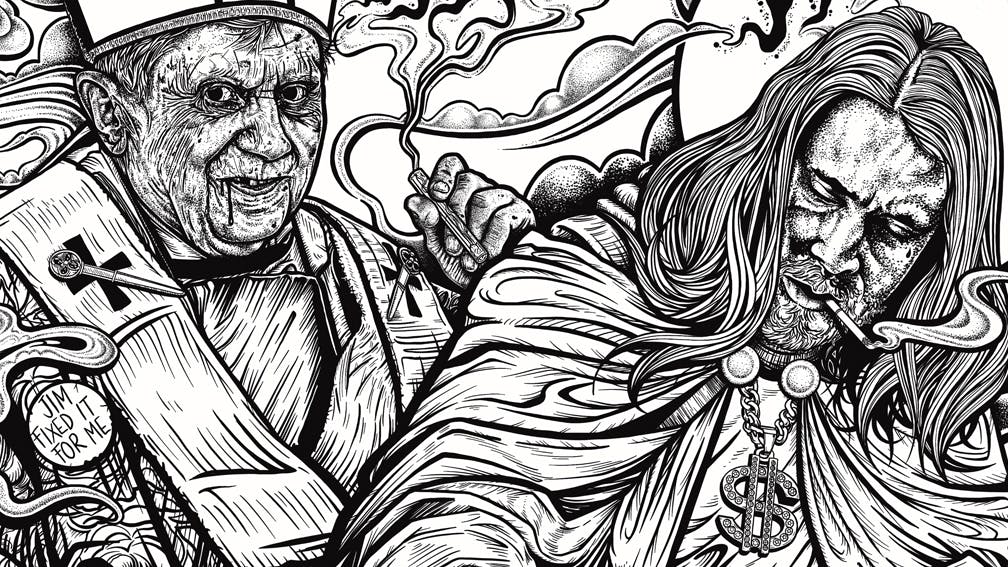 With thwacking drum machine beats, sledgehammer riffs, spoken word samples and vocals characterised by punky rasp and edge-of-the-abyss anguish, this EP is highly evocative of the sort of grey-skies industrial that flourished in early ’90s Britain. Two of the most influential such bands, Godflesh and Scorn, were founded by early Napalm Death members Justin Broadrick and Mick Harris respectively, so it’s entirely fitting that Lair Of The White Worm turns out to be the pseudonym of John Cooke, who’s been part of Napalm’s live set-up for seven years and also plays in Corrupt Moral Altar, Venomous Concept and many more.

Clearly used to a busy time of it, John manages to cram a lot into these six tracks. Opener Virtu kicks things off with claustrophobic bludgeon, while Isolation rides an almost danceable rhythm (and a David Cameron sample!) to recall the harrowing early work of Pitchshifter. Similarly, Bankrupt Morality has an energy that could ignite a darkened goth dancefloor, while simultaneously sounding not unlike something Napalm might have come up with during their more experimental mid-’90s period.

The second half of EP1 slows things down, with bad trip interlude Into Ludes stepping into Scorn territory. Misery Box is built around a sombre chorus lyric of ‘Everything falls apart’ and final track Waster pits reflective, elegiac verses against overloaded industrial terror, drawing proceedings to an overwhelming conclusion by approximating a tussle between Godflesh and another Justin Broadrick enterprise, the fuzzy shoegaze outfit Jesu. There aren’t many making this sort of racket as convincingly as Lair Of The White Worm right now; let’s hope EP2 isn’t too long coming.

For fans of: Godflesh, Scorn, Pitchshifter

EP1 is released on October 15 via APF / Trepanation

READ THIS: The 22 most essential grindcore albums

Napalm DeathLair Of The White Worm