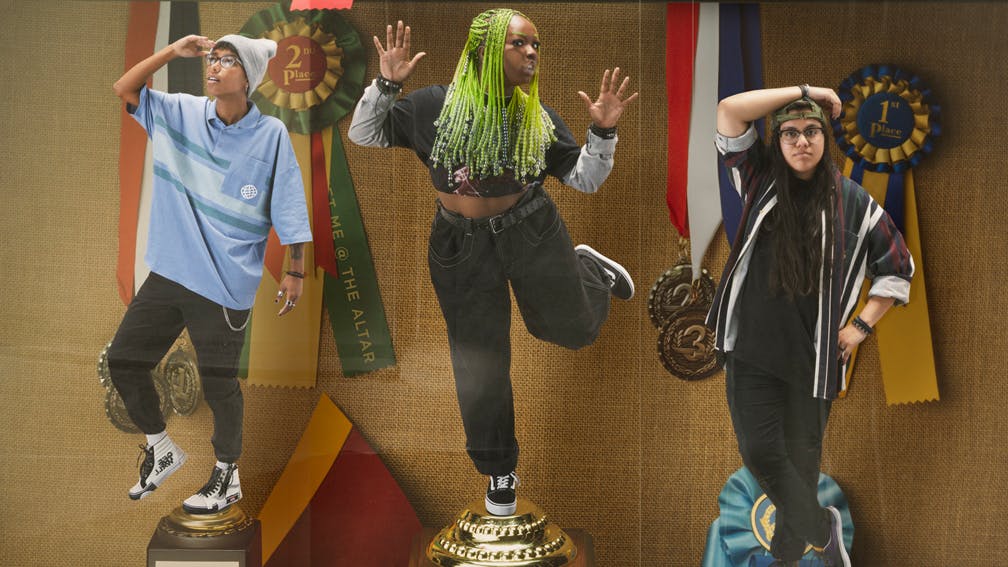 2020 saw stand-out pop-punk releases from the likes of Machine Gun Kelly, KennyHoopla and All Time Low. In amongst that high-profile competition, U.S. newcomers Meet Me @ The Altar dropped an absolute belter of a track in Garden, which earned them praise from pop-punk god Mark Hoppus and rightly cemented itself as one of the year’s best songs within the genre. Model Citizen, Meet Me @ The Altar’s new EP and debut on heavyweight alt. label Fueled By Ramen, builds on this momentum in fine fashion, bringing something new to pop-punk in terms of sound and, more importantly, the very idea of what a pop-punk band can be.

Kicking-off with the rousing easycore chug of Feel A Thing, Meet Me @ The Altar make clear from the outset their love of hooky choruses and melody. There’s grit to what the band – vocalist Edith Johnson, guitarist Téa Campbell and drummer Ada Juarez – do too, though, with hard-hitting riffs and gang vocals present to balance out their more melodic sensibilities. Better yet, Edith’s lyrics shine as she details the feeling of numbness that comes with stress and mental fatigue – ‘I’ve been holding my breath to keep in all that’s left / I should be hurting but I can’t feel a thing’– demonstrating an intelligence beyond their short years.

The headbang-inducing Mapped Out and euphoria of Brighter Days (Are Before Us) continue this fine work. On this evidence, it’d be enough for Meet Me @ The Altar to exist simply as a new-wave easycore band, breathing new life into a sound that’s been forgotten to the Warped Tour’s glory years, but there’s more going on here. Meet Me @ The Altar represent the changing face of pop-punk, as they join artists like KennyHoopla, Pinkshift, Stand Atlantic, POORSTACY and Hot Milk in proving how 2021’s pop-punk pack is no longer dictated by the same old broken-hearted straight white men.

They continue to excel as they fly through the more traditional pop-punk sounds of Now Or Never – another song where the riffs hit hard, the choruses soar and the honey-sweet vocals work in tandem with the track’s more aggressive elements. By the time this EP draws to a close, it’s fair to say that its creators haven’t really strayed too far from their core sound – something they’ll want to build on with future releases – but when the songs just work and everything sounds so fun, it feels rather greedy to ask for more. Besides, while a track like Never Gonna Change may not break the mould, it’s the kind of uplifting and triumphant pop-punk anthem that wouldn’t sound out of place in a Slam Dunk headline set at some point down the line.

Such greater things undoubtedly beckon, but for now, Meet Me @ The Altar can rest easy in the knowledge that their early success is signalling change in a scene where – as they told Kerrang! in our recent cover story – they previously didn’t feel like they belonged. Songs, shows and all else aside, that’s got to feel like a pretty big win.

Model Citizen is released on August 13 via Fueled By Ramen.

READ THIS: Meet Me @ The Altar are changing the face of pop-punk for the better

Meet Me @ The Altar will be hitting the road in the U.S. with Daisy Grenade and Young Culture next year…