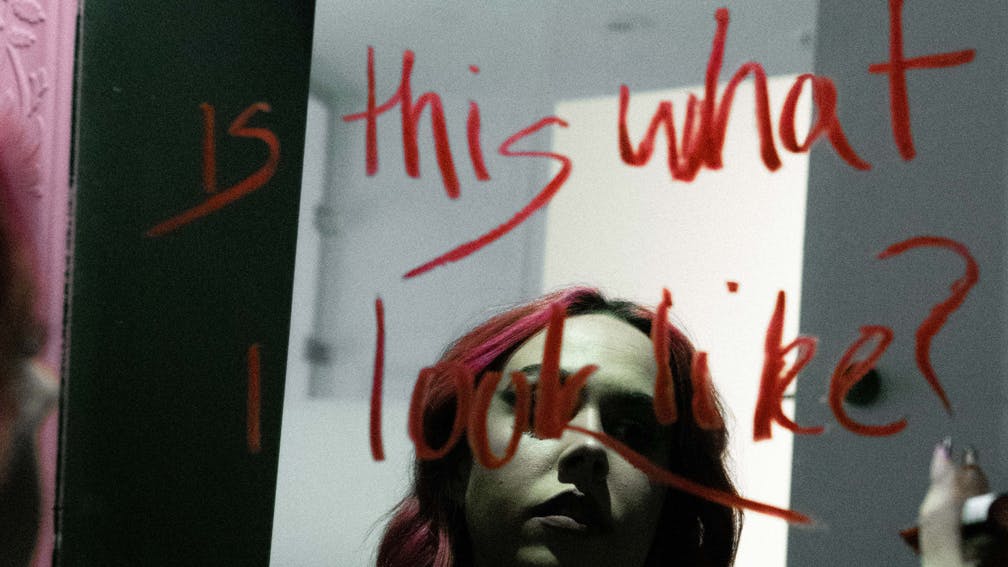 After the release of their exuberant debut album Self Care in 2020, Yours Truly had planned to put out a three-track EP that reached outside of the positive tone of that effort, aptly titled Self Sabotage. What arrives instead is twice that length, but fulfils the goal. On is this what i look like?, Yours Truly go darker and more aggressive than before.

The breakneck thrill of Walk Over My Grave announces that there’s more to Yours Truly than what we’ve seen, and sets the tone for the EP’s intensity and confidence. Bruises, which features Drew York of Stray From The Path, is in the same vein, but injects some fun back in with its bouncy refrain. Bittersweet Careless Kind offers a change of pace, brighter and more laid-back than the other tracks.

After the swirling interlude, Hallucinate picks up the energy with a sinister swagger. You Me At Six’s Josh Franceschi guests, a fitting choice not only because of the similarities in both bands’ styles and evolutions, but also because YMA6 have been a big influence. The upbeat If You’re Drowning (I’ll Learn How To Hold My Breath), meanwhile, is another moment of light shining through the EP’s darker atmosphere. Closer Lights On captures what the band have come to excel at over the course of these songs: driving, hard-hitting, high-speed rock.

Vocalist Mikaila Delgado navigates the zig-zagging melodies, going from gentle falsettos to more aggressive parts, with a fluidity that makes it look easy. She sounds like she’s giving it her all throughout, and like she feels each and every emotion she’s singing about fully, which is what makes this collection of songs particularly powerful.

Yours Truly have expanded their sweet spot on this EP. It’s fast, loud, bursting with energy and there’s no shortage of lines that’ll prove difficult to shake from your head. With a healthy amount of variety and levity mixed in, what’s not to love?

For fans of: Stand Atlantic, State Champs, You Me At Six

is this what i look like? is released on July 15 via UNFD

Yours Truly will be joined by South Arcade and Lizzy Farrall on their six-date headline tour next March.

Yours Truly: “We need honesty in all aspects of our lives. I don’t want to portray something I don’t believe in”

In writing Yours Truly’s new EP, vocalist Mikaila Delgado underwent “this really unglamorous self-discovery”. Now, with the band coming into their own, the singer is determined to show the world who she really is – at all times…

Yours Truly return with new single and video, Lights On

Watch the video for Yours Truly’s brand-new single, Lights On.

Is pop-punk – the genre that gave us blink-182, Green Day and Paramore – dead as we know it? Or does the success of Machine Gun Kelly represent a rebirth for the genre?

Album Review: Yours Truly – Self Care

Listen to Yours Truly's new single Together, taken from their upcoming debut album Self Care.