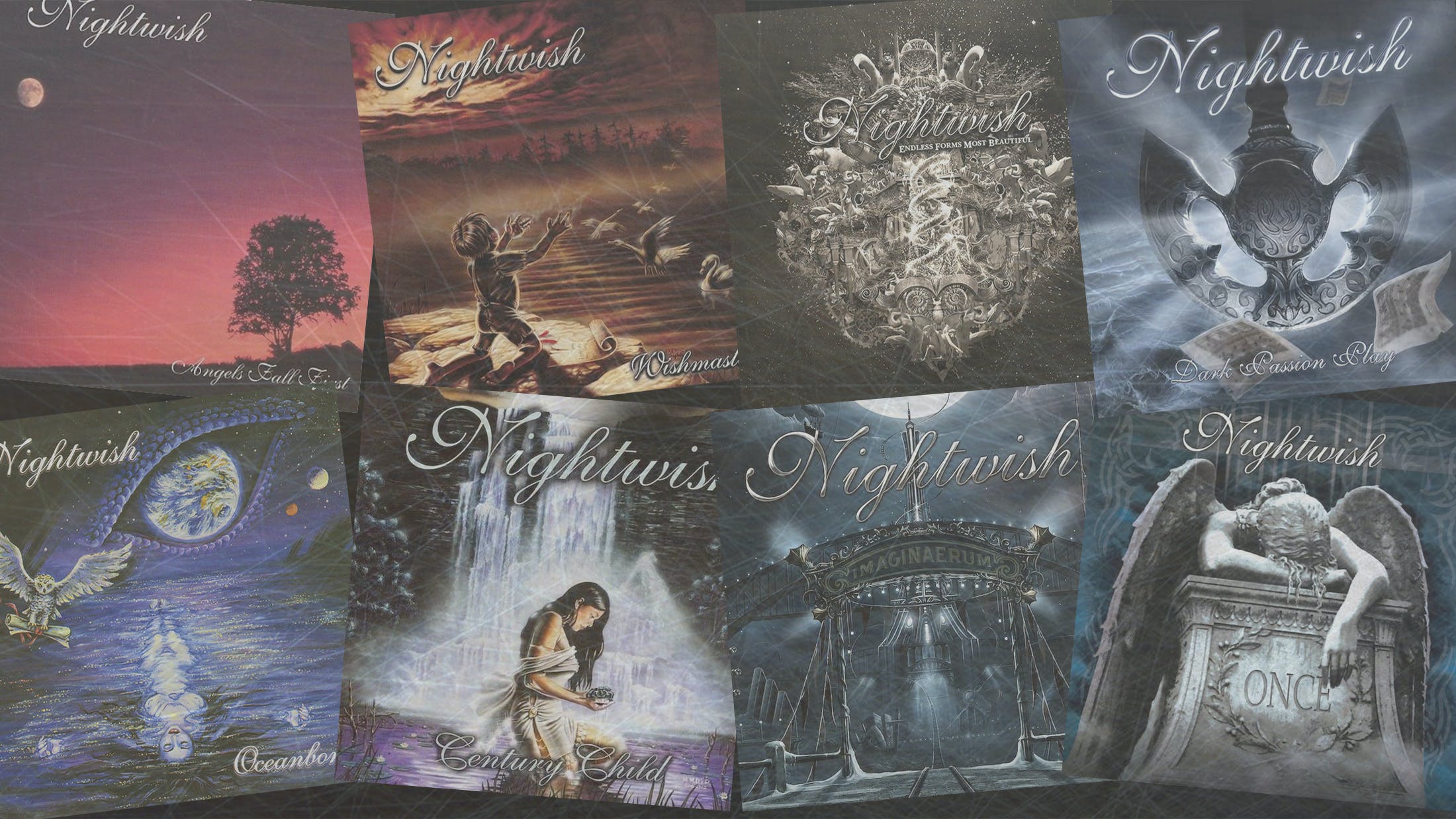 They may have started out by simply strumming acoustic guitars around a campfire, but Finnish band Nightwish have evolved into majestic standard-bearers for epic, filmic metal. You’ll rarely see them anywhere more intimate than an arena now, but their journey to those heady realms hasn’t been smooth. We track that unorthodox ascent and place their eclectic back catalogue in some semblance of order…

Many of rock’s greatest bands have delivered classic debut albums – music that becomes engrained in rock culture. Nightwish, it’s fair to say, aren’t one of them. Angels Fall First can best be described as an oddity, the first splashes of colour on a picture that eventually expanded beyond recognition. The band’s founder and main songwriter, keyboard player Tuomas Holopainen, originally viewed Nightwish as an acoustic project. This full length debut was already a stepped change – it introduced heavy guitars and a lofty sense of ambition that the band in its formative era couldn’t fulfil. The Carpenter featured verses sung by Tuomas himself, a mistake he never repeated. Elvenpath offered just a taste of the extravagance to come, but the album did mark the debut of Tarja Turunen, whose disciplined, operatic vocals would soon provide the band with one of its unique selling points.

While this second album was infinitely more focused than its predecessor, Oceanborn remained the work of a band battling to establish its identity. Many of the musical traits and thematic emblems that would soon define Nightwish were landed here. The guitars were sharper and the production was bigger, but it was Tarja’s polished soprano trill that elevated Oceanborn – and Nightwish – out of obscurity. It opened with Stargazers, all ballistic drums and symphonic bombast, while the less volatile Sacrament Of Wilderness became an unlikely hit single in the band’s homeland. Riddled with classical allusions, Oceanborn was something power metal fans hadn’t really heard before – and weren’t quite sure how to process.

“Master! Apprentice! Heartborne – seventh seeker!” The title track from this fantasy-themed third album delivered the band’s first warrior-class audience chant. It was by far the most cohesive and epic-sounding album to date, with She Is My Sin making full use of Tarja’s note-hitting precision. It also featured the slow and majestic Dead Boy’s Poem, a rabbit hole descent into the often tortured mind of the band’s songwriter, sensitivities that would be revisited to spectacular effect in future. Wishmaster was the first of the great Nightwish albums, and also the first to reach number one in Finland – a feat all subsequent releases have matched.

Rummage into this box of delights and you might find a kitchen sink or two lying around. Nightwish threw everything they had at Imaginaerum. It went deeper, wider and higher than even this most ambitious of bands had been before. Slow Love Slow’s languid jazz wasn’t on any metal fan’s agenda, but what the album lacked in consistency it made up for in sheer scale. Hell, they even made a movie to go with it. There was a twisted sense of carnival about the whole thing – it became symphonic metal’s answer to steampunk. Strip away its weird diversions and spoken word passages and you’re left with some of Nightwish’s greatest songs – I Want My Tears Back with its Celtic reels and monster hook, Storytime’s excited gallop and the celebratory Last Ride Of The Day.

A period of turmoil – nothing compared to what followed, admittedly – almost caused Nightwish to fold after the Wishmaster world tour. The recruitment of fantastically bearded bassist and co-vocalist Marco Hietala and the arrival of new management restored stability, and led to fourth album Century Child continuing the band’s steady ascent. Not only had the songwriting hit new emotional heights, but Marco’s leonine roar offered an engaging counterpoint to Tarja’s well drilled operatics on the likes of Dead To The World and Slaying The Dreamer. In Bless The Child Nightwish created an icy goth classic. From its funereal melodies sprang a sense of wide-eyed wonder, something that set the tone for an album that touched metal fans in unfamiliar ways.

The curse of the artist is that his best work is often the direct consequence of his darkest hour. So it was for Tuomas, who composed his most cathartic showcase, The Poet And The Pendulum, as a reflection on the acrimonious departure of Tarja, and the severe depression he experienced in the aftermath. This turbulent epic resolves in a devastating mother-to-son coda which remains perhaps the most emotional climax of the many Nightwish have blessed us with. And that was just the first track from a magnificent comeback record, the first of two to feature Swedish singer Anette Olzen. It also bristled with the furious Marco-led Master Passion Greed and the self-explanatory Bye Bye Beautiful, while also delighting with the divine Amaranth and the soothing folk of Eva and The Islander. From a band on the brink of implosion, it was a masterpiece that Iron Maiden leader Steve Harris described as “one of the best albums I’ve heard in my life...I don’t think there’s anything else that I’ve heard out there that’s even close.”

We can be pretty sure that Once would rank as Nightwish’s most loved album in any fan survey. There’s no denying that it contains more outright classics than any other release. It also marks Tarja Turunen’s last stand with the band, and is easily her finest hour. Everything about Once is immense. Explosive opener Dark Chest Of Wonders was built for kickstarting big shows with flames and smoke, and power metal bangers Romanticide, Wish I Had An Angel and Dead Gardens rammed everything home with interest. The pinnacle came in the form of two contrasting tracks – Nemo, its lone wolf sadness capturing its writer’s increasingly depressed and conflicted spirit (“these lines the last endeavour to find the missing lifeline”), and the genre-defining Ghost Love Score, symphonic metal’s greatest ever classic. Backed by the London Philharmonic Orchestra, Once was an album short in title, but huge in every other sense.

The top dog and first choice in any Nightwish virgin’s shopping list has to be their most recent album. Not because it features as many accepted classics as Once – it doesn’t, at least not yet – but because this is the release that transformed a big metal band into an arena-filling phenomenon. It’s the only album so far to feature the band’s current and definitive line-up, completed by peerless vocalist Floor Jansen and English multi-instrumentalist Troy Donockley. It’s every bit as epic and emotional as any previous opus, but this time the maestro behind it all, Tuomas Holopainen, has clearly overcome the demons that once almost destroyed him. It’s less personal, more celebratory, and the songs – from Élan’s folk lilt to Alpenglow’s landslide hooks – stand as tall as a mountain range. While opener Shudder Before The Beautiful could easily have soundtracked a Lord Of The Rings battle sequence, it’s actually a joy-filled hymn about our planet, about how amazing it is that any of us are here at all. Similarly, the multi-part, 24-minute Greatest Show On Earth pays off the patient – this vehicle of spirit is nothing less than a love letter to life itself.