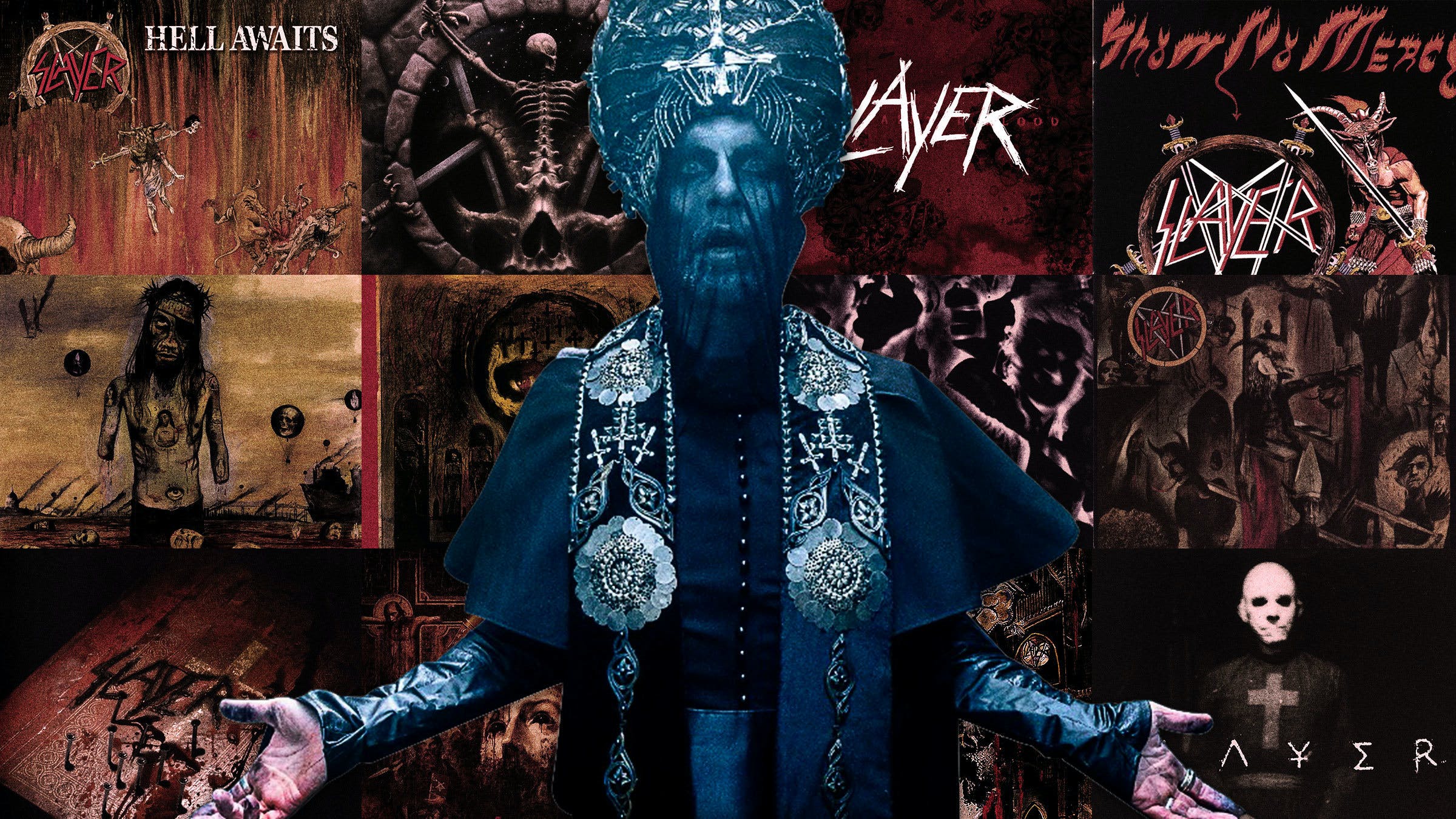 Few metal bands have superfans quite like Slayer. The scariest of thrash metal’s legendary Big 4, Slayer are the ultimate band for everyone who loves all things morbid, evil, and loud. Their straightforward embrace of Satan, both in His most traditional form and as a force for blasphemy within us all, has inspired countless musicians to celebrate the Devil in their music.

When it comes to modern metal bands accepting Lucifer as their Lord and savior, nobody does it quite like Poland’s Behemoth. Which is why it’s unsurprising that Behemoth frontman Adam “Nergal” Darski is an avowed Slayer megafan, with a working knowledge of the band’s entire discography.

So in honor of International Slayer Day, we reached out to Nergal -- who is currently on tour with Slayer in Poland, natch -- and asked him to give us his expert opinion on the entire Slayer catalog. Here’s what he told us:

"This might actually be my favorite Slayer record, and that’s due to sentiments. This was the first Slayer record I’d heard, and I just fell in love with it. Live Undead is kind of a continuation of this record, so those two are my most favorite from the band. I’m actually ! going to be performing Evil Has No Boundaries with Slayer tonight! It’s just such an evil and very black metal record."

"Hell Awaits is one that I’ve been thinking about much more highly as of late. Back in the day, it was just a record that wasn’t for me. There’s too much reverb, and that affected my impression of the record. It sounded so messy! Lately though, I’ve been digging deeper into the songs, because Slayer is one of those bands that I always revisit. Especially as I get older, my taste changes, and I feel that would especially affect my opinion on a Slayer record, and it has for Hell Awaits. There are great songs -- the opening track, At Dawn They Sleep...it’s a hell of a record. When they play the opening track, there’s a lot of cool fire on stage. It’s one of the highlights of the set."

"Everyone always calls Reign in Blood Slayer’s magnum opus, and it probably is. It’s the ultimate thrash metal record, and amazing from start to finish. It’s definitely a favorite of mine, that’s for sure. When they did the blood effects on the Still Reigning tour, it was absolutely incredible. It was with Jeff, so it was the classic lineup performing the classic record in full. Angel Of Death and Post Mortem are my two favorites on the record, and I also think Jesus Saves is very underrated. I wish they would perform it, but I think the vocals are too fast for Tom now. Then again, he’s been nailing Dittohead on this tour, so maybe he could pull it off."

"It’s like a yin and yang, because this is the slowest record of Slayer’s discography up to this point. I go back to South Of Heaven often. It’s more moody, and that Judas Priest cover is crazy. Tom’s singing has more melody, but it makes the album pretty fucking unique. I understand the direction they took, and there’s amazing songs on the record. They’ve been playing Ghosts Of War on this tour, and I’m happy they’re going back into their deeper cuts and performing great songs such as that one. Great record."

"Seasons In The Abyss is kind of the twin brother to South Of Heaven, in my opinion. It’s similarly constructed. Born Of Fire is one of their best songs, and again, it’s awesome they’re going into their deeper cuts and pulling out tracks such as that one [on their European tour]. It’s head-to-head with South Of Heaven. I go back to Seasons quite often as well. It belongs among the classic series of Slayer records."

"Man, I remember when it came out, and I didn’t dig it at all. Musically, I was already on a different planet, and I was never hooped on this. Honestly, that just never changed. I don’t know man, the album has moments, but the sound and approach just never got to me. Dittohead and Sex, Murder, Art are great songs, but as a whole? It’s not my Slayer."

"Even though it’s a cover album, I consider it part of their discography because punk is a big part of Slayer’s evolution. I like the cover of D.R.I.’s Violent Pacification. They’re playing Gemini tonight, which is cool. I thought the record was kinda cool, but it’s definitely not one I revisit often. I’d rank it higher than Divine Intervention, but it’s not one of my favorites."

"Easily my least favorite Slayer album. I absolutely love the cover. When I was starting Behemoth, I would use the cover as an example for what we were going for. The album title is so strong, too. It’s one of the best metal album titles ever! But I’m so disappointed they didn’t reach the full potential of the title. It’s mediocre Slayer and just way too nu-metal. Don’t get me wrong, there’s a lot of nu metal on their following records, but it doesn’t work on this one."

"Honestly, this is actually one of my favorite records by Slayer. God Hates Us All’s nu-metal elements work a lot better than Diabolus’s, especially on Here Comes The Pain and Exile. I’m not one of those guys that thinks the earlier Slayer records are the only classic ones. I worship this one equally to Show No Mercy and the others. It’s full of amazing tracks. Disciple is fucking awesome. Payback’s lyrics are so straightforward and punk -- fucking awesome. It’s a great, diverse record. Such an awesome sound, too. One of the reasons Behemoth decided to work with [producer] Matt Hyde was because of his work on this record. He has one of the best death and thrash metal sounds ever. Everything about it still has a wow effect to me."

"I dig this record. It has some of the best Slayer tunes. It's the last one with [drummer Dave] Lombardo, which is sad. I’ll always be the guy that gives an album a chance, especially with Slayer. To me, songs like Cult, Jihad, and Skeleton Christ, they’re all fucking amazing. On a scale from 0 to 5, this is easily a 4.5."

"World Painted Blood would be more of a 4 out of 5. It’s a solid record, but it’s a little unfocused. Christ Illusion was more focused. A lot of great songs, though -- Psychopathy Red is awesome. I remember seeing them perform it every night on the Mayhem Festival with Marilyn Manson ten years back, and it was so great to watch. Unit 731 is one of their best tracks."

"The title track is another classic from Slayer, period. Amazingly arranged. It’s a song that portrays my anger and hatred perfectly. It’s another 4 out of 5 record. If there were more songs like the track Replentless, it would be one of my favorites by them. I told this to Kerry, cause they still play When The Stillness Comes, which has this fucking incredible Slayer riff. When the drums and everything come in, it’s fucking awesome...but then it just ends! I told him I thought that was so disappointing, because it could’ve crawled into something bigger. Like a nice coda. I think it’s a pretty solid record. It has a nice sound and some of the best vocal production for them ever."