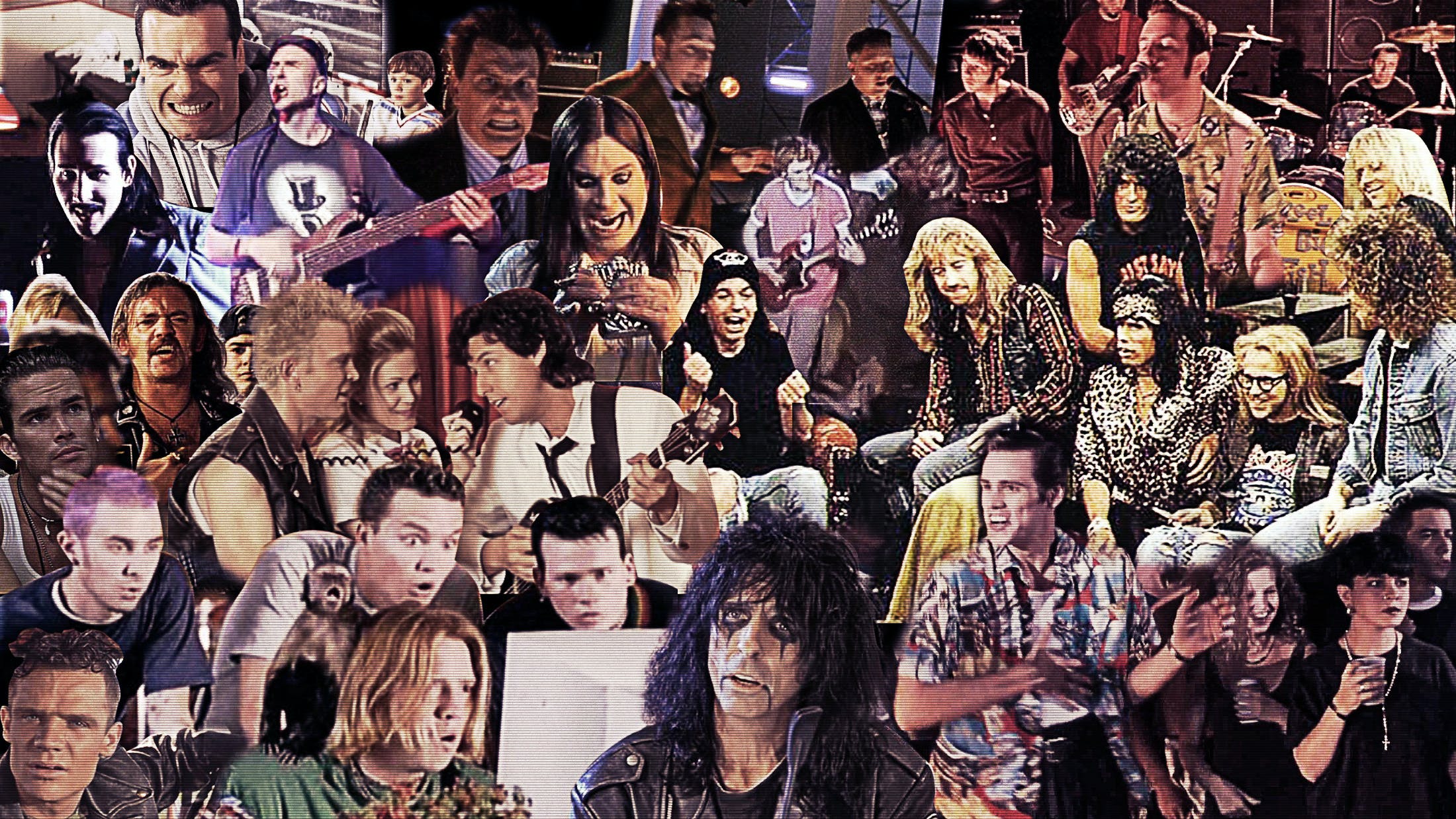 The 1990s was quite a decade musically. It took the world from hair metal through grunge and alt.rock to rap-rock, pop-punk, nu-metal, third-wave ska and a reasonable amount of, 'Well, what the hell is this?'

Cinematically it took us from Terminator 2 to Star Wars: The Phantom Menace, but also did a fine line in low-budget comedy vehicles trying to make TV stars into household names, silly-teenagers-trying-get-laid escapades and really of-the-moment celebrations of slackerdom. These all lent themselves to cameos from rock bands of the time – why hire five extras to mime with instruments when you could get a band on the verge of stardom to do it?

Jim Carrey brought his well-documented love of death metal to his leading-man debut, picking Cannibal Corpse to appear in Ace Ventura. The band refused to reschedule their European tour to make the Florida filming dates, so the shooting schedule was rearranged around them. Drummer Paul Mazurkiewicz later recalled “We got a call saying, 'Jim Carrey really wants you guys. They’re gonna rearrange their schedule to accommodate you.' That just blew us away, because this is a major movie production. I mean, Jim wanted us that bad.”

Lemmy and White Zombie in Airheads (1994)

Adam Sandler, Steve Buscemi and Brendan Fraser play the Lone Rangers, a band so desperate to get on the radio that they hijack a radio station. The world has changed since then, both in terms of broadcasting and security. White Zombie appear as themselves, playing in a bar visited by the late, great Chris Farley, while the just as late, just as great Lemmy has a one-line cameo as, er, the former editor of his school magazine.

Blink appear as a fairly blink 182-esque garage band whose rehearsal (look at that space, God almighty, imagine the rent on that if it was in the UK) is interrupted by their monkey-owning friend informing them of naked webcam antics. Due to an administrative error and/or a bit of last-minute Googling, Travis Barker is named in the credits as previous Blink drummer Scott Raynor, which was presumably reeeeeeally awkward.

Flea nearly ruined everything. He plays Needles, a minor but key role in the second and third BTTF films – his goading of Marty (Michael J Fox) leads to a race, which leads to a crash, which leads to a broken hand, which throws his whole timeline off and sends his life on a downward spiral. While the Back To The Future trilogy is largely beloved, Flea himself can take it or leave it. “[Filming it] is just a blur,” he later recounted. “And I lost the sweater that my grandmother had knitted me somewhere on the trip. I think I only saw those movies when they came out. Never since.”

Ridiculously juvenile and incredibly funny, BASEketball brought together the director of Airplane! and the creators of South Park in their only mainstream starring roles. Trey Parker and Matt Stone play the inventors of a hybrid sport that takes America by storm, thanks in part to not involving lot of running. Their team, the Milwaukee Beers, have in-stadium entertainment in the form of Reel Big Fish, whose cover of A-Ha’s Take On Me is ace.

The second Bill & Ted movie – the one where, as well as travelling through time and space, they transcend the laws of life and death – climaxes in a performance at the San Dimas Battle of the Bands, where the band performing before Wyld Stalyns is none other than Primus. One of the least realistic parts in a film that cares not a jot for realism is the idea that, even with robots and transdimensional beings, Bill and Ted’s band would beat Les Claypool and his six-string bass insanity.

Following the success of the Chris Farley/David Spade comedy Tommy Boy, they reunited in Black Sheep, directed by Wayne’s World’s Penelope Spheeris. In one sequence, an extremely stoned Chris Farley finds himself at an MTV Rock The Vote event, where grunge kings Mudhoney encounter him when coming off stage, pushing him on, where he delivers a high, bombastic monologue culminating in a cry of “Kill Whitey!” Mudhoney singer Mark Arm recalls Farley doing his best to make the band laugh – “taking his shirt off, jiggling his belly” – and being unimpressed with their stony faces.

The Mighty Mighty Bosstones in Clueless (1995)

Amy Heckerling’s update of Jane Austen’s Emma changed how the world spoke, as well as introducing it to the ever-so-likeable Paul Rudd. And, in the party scene, that is none other than nine-piece ska revivalists Mighty Mighty Bosstones. “I’ve got a feeling about this movie,” said lead singer Dickie Barett in an on-set interview “And it doesn’t make me feel comfortable.” The rest of the band described the film, and their role as themselves, as “stupid” and “not cool”.

The greatest band in the universe appear as hallucinated versions of themselves as record store employee Mark (Ethan Embry) enjoys a pot brownie. Not only does Oderus Urungus directly address him through the screen, he invites him to join the band – appearing with them on screen, he then watches as his own body is devoured by the World Maggot. Drugs! Fun! The idea for the scene came from Embry himself, and it was filmed live on stage at a GWAR show in LA. “We took two cameras in, and I just went out and did it during the show,” Embry told Vanity Fair. “We did a couple takes of it, and the audience was just standing there like, ‘What is going on?’”

Of all the things that fully-shit Californian pop-rockers Sugar Ray have been unfairly lucky to do in their career, acting alongside the late great Robin Williams has to be up there as the most unfair. It’s in one of his lesser films, admittedly, the very uneven comedy Father’s Day, but still – Robin Williams and Billy Crystal pissing about with German accents can never be a bad thing. Despite playing himself, Sugar Ray lead singer Mark McGrath somehow manages to be terrible, which makes sense as they are the absolute worst.

The Offspring and Tom DeLonge in Idle Hands (1999)

The Offspring do themselves proud in awesome slapstick horror comedy Idle Hands, performing two songs before Dexter Holland gets the top of his head ripped off by a demon-possessed hand. However, it’s Tom DeLonge’s tour de force of a performance as “Dave from Burger Jungle” that steals the show. He is on screen for about three seconds and says “Alright” in a sort of British accent. It’s excellent.

The dead-dad-comes-back-as-a-snowman family comedy Jack Frost inexplicably, but awesomely, features Henry Rollins as the coach of a peewee hockey team, delivering some trademark yelling, albeit with very PG language. Rollins found himself in the film thanks to his philosophy of taking as many opportunities that come his way as possible, and spent the time between scenes playing punk and jazz to the kids on set to give them the best music education possible.

A cult hit in the vein of Heathers, Jawbreaker stars Rose McGowan, Rebecca Gayheart and Julie Benz as a clique of murderous teenagers. McGowan’s character at one point has a fling with a character known only as The Stranger, portrayed by a never-quite-in-focus Manson sporting a moustache. Manson and McGowan were engaged in real life at the time, and their sex scene ended up too graphic for the Motion Picture Association of America, who objected to “the number of thrusts”.

Whatever Adam Sandler does he gets criticised for it – the endless films where he just goes to Hawaii with his friends are seen as lazy and unimaginative, while this genuinely ambitious effort was dismissed by critics as “dumb, tasteless and not that funny”. Sandler packed the film with metal references, and for a climactic scene where his character’s villainous older brother transforms into a bat, got Ozzy Osbourne to cameo as himself doing one of the things he’s best known for and biting its head off.

The cameo by Alice Cooper and his band in the first Wayne’s World is up there with the greatest scenes in cinema history, a masterful combination of self-effacing grandstanding and genuinely interesting Milwaukee trivia. “I think we did it in two takes,” Cooper later recalled. “They [Myers and Carvey] were doing everything they could to get me to break up. But they didn’t realise my iron will, so I went right through the dialogue and I think I surprised them. But if you see the outtakes of, ‘We’re not worthy, we’re scum,’ it goes on for like five or six minutes and it just gets vile.”

Before Wayne and Garth hit the big screen, they started out as a recurring sketch on Saturday Night Live. Aerosmith’s guest appearance in the sketch, with the band appearing in Wayne’s breakfast nook before performing their theme tune, was voted the greatest moment in SNL history. However, the band turned down the opportunity to be in the first film, a movie they came to regret when it became a huge hit, hence their appearance in the sequel.

Adam Sandler’s foray into the world of romantic comedy is set in 1985 and packed with references to the music of the period. Appearing as himself is a barely-aged Billy Idol, who took the role after accepting that his Sandler-obsessed son would inevitably make him watch it. “Like MTV, it was another way of getting through to young people but that wasn't the reason I did it,” he said a few years ago. “My son loved Adam Sandler and I thought, 'I'm going to have to see it anyway, so why not be in it?' I gained a number of diehard teenage fans through doing it, who are adults now and are still turning up to my gigs."