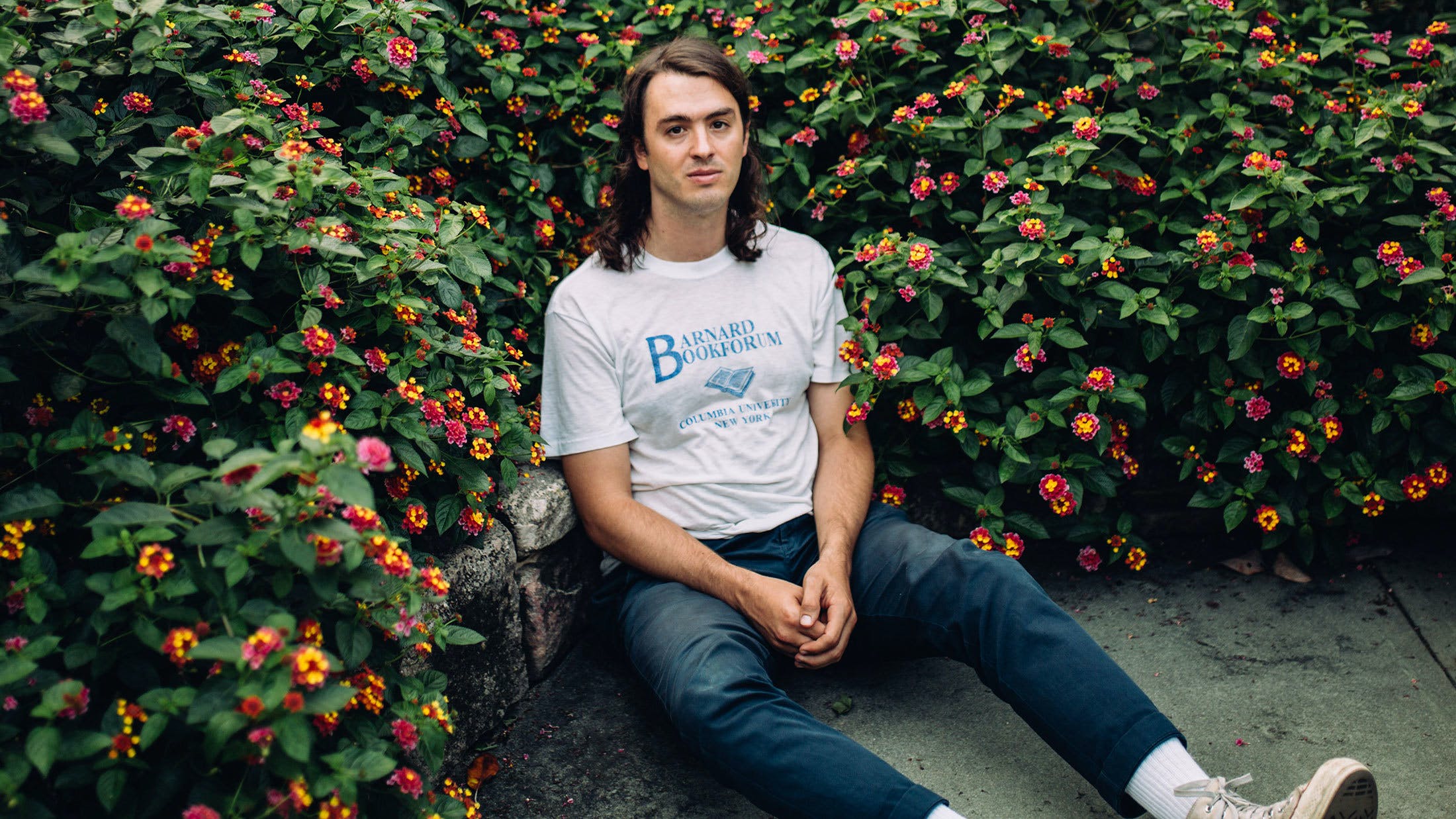 The name Ned Russin might not mean much to you yet, but it soon could. He’s the 30-year-old, (mostly) one-man band responsible for Glitterer, whose new record Life Is Not A Lesson arrives as one of 2021’s most unique and deceptively dense alt.rock offerings, meeting somewhere between fuzzy loud’n’quiet dynamics and new wave-curious bedroom electronics. Deceptively so, because the songs only occasionally pass the two-minute mark and no chorus is ever repeated, but the ideas involved are as big as the songs are economic.

Ned, you see, is someone who thinks a lot about the world around him. He spends a lot of time in his internal one too, processing what’s going on, searching for his place in the wider scheme of things and asking himself the big questions. He seems like one of life’s good guys, with a smart head on his shoulders – you’d like him.

“I feel like there is something profound in everything in life,” he offers, pulling at the thread of some themes found within these 12 new songs. “It's not like nirvana or an epiphany – I never know the right word for it – but we have to remind ourselves that everything is kind of important, interesting and beautiful.”

Coming from the mouth of someone else, a cynic might call hippy-dippy bullshit on this. But we know from his 2019 debut album Looking Through The Shades, and his time in Title Fight – the hardcore-turned-something greater Pennsylvanian quartet who hung up their gloves the year before – that Ned is resolutely not full of shit.

Title Fight mattered because they were the real deal. They had a cool, insouciant vibe and they put out consistently great releases with a style that evolved naturally over time. They represented the hopes and dreams of countless bands from the underground, taking their shot and making a success of things on their terms. Best of all, they blazed bright and strong, calling it quits without ever compromising on the purity, spirit or integrity of what they did. Ned was at the heart of it all, so his endeavours since have naturally been followed with great interest among those in-the-know. For those not, now is a good time to put that right.

Every day, Ned drives past the rental property in Washington, D.C. where Life Is Not A Lesson was made, and a great sadness falls upon him. Since July last year, he has lived with his girlfriend two blocks away, and while the world remains in the limbo of the pandemic, he pays the bills by working a nine to five job at a record store warehouse. The scene of these songs’ inspiration, creation and execution haunts on those drives to and from work however, standing as it does like an agonising reminder of how good things used to be. Unfortunately, the house had to be put up for sale so that the landlord could afford to put her mother into assisted living.

“We got evicted during quarantine, which was nice,” Ned chuckles. “The landlord was always really nice, but she had no choice. She was like, ‘I'm sorry, you've been good tenants, but I have to kick you out.’ The crazy thing is, the house hasn't even sold. It’s just sitting there. There's a practice space in the back where I made the whole record. It was a community hub of D.C. punk and now it's gone. So many bands depended on it. A large part of the D.C. punk and hardcore scene only existed because of that house.”

While that’s a sad story likely to become all too familiar (if it hasn’t already) as artistic communities worldwide continue to count the cost of the past 12 months, at least Life Is Not A Lesson got made at all.

“The record wouldn’t have turned out how it did had it not been for the practice space,” Ned reflects. “The record happened the way it did because of quarantine. My [twin] brother Ben [also ex-Title Fight] recorded the drums in the basement at my parents’ via FaceTime with me, but aside from coordinate with my friend Arthur [Rizik, mixing and mastering], I was all on my own, and there are some things that I wouldn't have been able to do without having been locked in that basement for three months. When you're alone with yourself for that long, there’s insecurity. There were times I'd have to put it down and have to come back to it, because it was all too much.”

At the heart of this and informing the songs themselves was one nagging central notion that Ned couldn’t take a break from.

“The word ‘want’ kept coming up when I was writing,” he explains. “It kept sounding right, so I needed to figure out why I kept going to that place. A lot of the record is about desire – in ways that are not necessarily positive. It can keep us tethered to things that aren't helpful, or are potentially harmful. You want to be, and you want to be perceived a certain way, but why? Why do we want these things? Desires aren't necessarily a bad thing, but there's something about the feeling that's weird to me. Being in quarantine magnified those ideas.”

Thankfully, he found a degree of resolution to these quandaries as he worked his way through the songs, culminating in the final track which gave the album its title and definitive statement.

“It’s like a self-affirmation,” he says, unpacking its summary sentiment. “We are made to feel incomplete without achieving certain goals, but these are asinine ideas. We know you don't need to have a career as a generic professional whatever or to make a lot of money to be a successful person, but for some reason, it can still make you feel not great when you turn 30 and you're eating mac and cheese on the couch.

“I know that that's ridiculous,” he adds with a breezy shrug, belying the existential weight of what he’s driving at, “but I still feel doubt sometimes. I still feel uncertain and insecure. I’m not above and beyond that by any means. I think it’s important to process these things in a way that is vulnerable, but also hopeful.”

For the first time since he was 18, Ned won’t be hitting the road to share his new music with people. He says he feels “drained” about that and admits to feeling somewhat robbed of the rush that usually comes from wrapping up a record. He’s been sitting on it since the middle of 2020 and now it’s finally ready for public consumption. But what comes next? It’s a tough question – one facing almost every musician releasing music right now – but especially tough when you’re an independent artist who relies on the road to help support your ambitions. For someone who evidently thinks deeply about everything, the situation does bother Ned, but he’s made his peace with it, instead choosing to be optimistic about what we can all take forward with us.

“It would be nice if people came to shows and listened to my record,” he reasons, “but music is bigger than me. I don’t need that for me personally or to feel good about myself. I want people to feel good about themselves. I want people to appreciate that music is a fragile thing and it needs support to exist. I hope when we come out of this people are excited about it again.”

As a record shaped and affected by the awfulness of this global tragedy in a most unique way, if Life Is Not A Lesson can teach us anything, as it has Ned, then perhaps it’s that wanting for something, especially those things that we have no power to control or manifest, is fruitless. For now, maybe it’s enough to just be.

Glitterer's new album Life Is Not A Lesson is out February 26 via ANTI- and is available to pre-order/pre-save now.