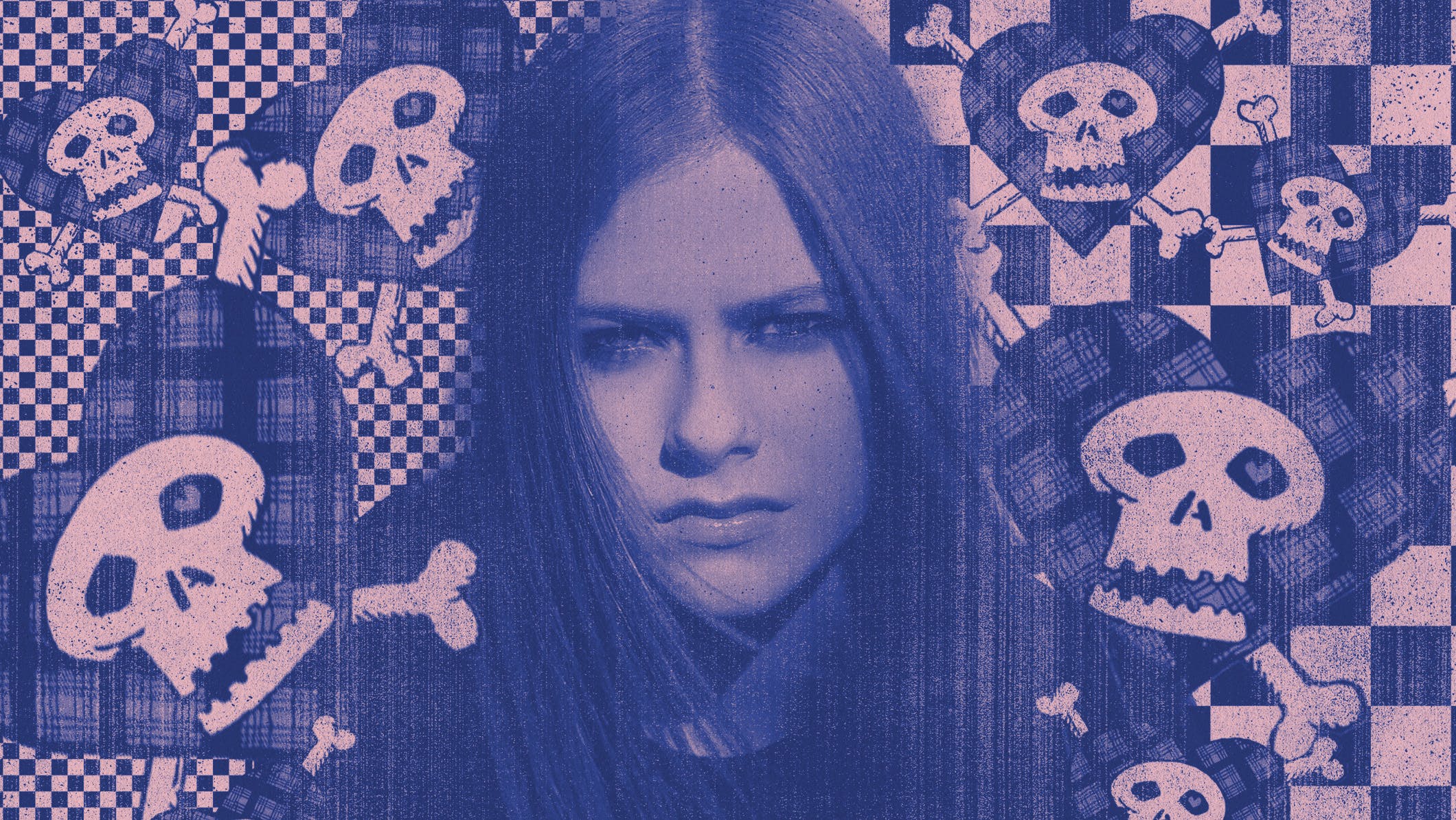 Avril Lavigne is awesome, and anyone who disagrees is objectively wrong. That is going to be the main thrust of this piece, so if you vehemently disagree, at least you've had a heads-up.

She made a huge impact in a male-dominated genre, casting a long enough shadow that she’s still used as shorthand, over two years after her debut, to describe any similar act that comes along. She’s been cited as an influence by countless bands, singers and rappers who have followed in her wake (Hayley WIlliams believes Paramore would never have been signed if not for Avril), and she’s overcome a whole load of obstacles in her personal life. She’s put out several all-time bangers, helped the tie industry no end and successfully reinvented herself several times.

With that in mind, here are some ways she’s made the world a richer place, while being treated far more poorly than she deserves.

1A universe of what-ifs

Avril is phenomenally successful, so it’s hard to question any of the decisions that were made in presenting her to the world, but one decision made quite early on shaped how the world would see her.

In putting together the marketing strategy for her debut album Let Go, her management umm-ed and ahh-ed before deciding not to lead with the single I’m With You, a sensitive, grown-up power-ballad. They chose instead to release it as the third single, after the one-two pop-punk punch of Complicated and Sk8er Boi.

The album sold 20 million copies, an absurd amount, so again, it’s hard to question, but it meant that the world’s introduction to her as an artist was this almost cartoony, excessively accessorised, plaza-pranking, tie-and-tank-topped figure, possessing hella catchy tunes but at the same time reasonably easy to dismiss as, well, silly? Complicated, for instance, is a song about the importance of being true to oneself and not succumbing to affectations, falsehoods and trends in order to try and impress people, performed by a young woman wearing two ties. That’s… yeah.

It’s interesting to wonder how different the world’s perception of Avril might have been if either they’d pushed the more 'credible' tunes first, or she had been positioned as leader of a band rather than as a solo artist. If she was the singer from that ace Canadian pop-punk band rather than merely Avril, would she be headlining Reading & Leeds? Who knows? Something to think about, though…

Speaking of I’m With You, it’s really good. Nobody knows more about power ballads than Dave Fawbert of incredible club night Ultimate Power. Also, nobody loves the Avril Lavigne song I’m With You more than Dave Fawbert of incredible club night Ultimate Power. “Everything about it is brilliant: the distinctive intro with the cello, the impressive range of dynamic and emotion of the vocal, the subtle production touches – ever noticed that the bass slides up on lines one and two, but not three and four in verse two? Beautiful. And, of course, one of the greatest middle-eights in history – it's up there with Aerosmith's Don't Wanna Miss A Thing in terms of 'massive high notes that everyone attempts to scream'. The final 'I'm with yoooooo's… just magical. It's nothing short of a power ballad masterpiece that you could imagine Dolly Parton coming up with.”

Not the fake, nonsense, silly theory about her dying and being replaced (although more on that later). No, the mystery that endures two decades on, that keeps people up at night, that we may never truly reach a consensus upon, is this: who is the real baddie in Sk8er Boi? Is it the ballerina, the titular Boi, the ballerina’s friends or Avril herself? Sure, the ballerina didn’t date the Boi due to peer pressure, but peer pressure is a powerful thing. The Boi is innocent, but is apparently still going on about it, moaning to Avril enough that Avril knows all about the ballerina. The ballerina’s friends, who apparently share a nose between them, possibly a reference to the Graeae of ancient Greek mythology, are rotters not just for pressuring the ballerina into avoiding the Boi, but for getting tickets for his gig without ever mentioning to the ballerina that the Boi is now a famous guitarist. And Avril just comes across as a bit petty: there’s no mention of her ever having met the ballerina, so she’s basically gloating at not even an ex of her boyfriend, someone he fancied five years ago – they didn’t even go out.

(Personal note: I have been trying to convince people to pay me to write a book-length treatise on this for years now, and nobody will. If you are interested, perhaps due to being an eccentric billionaire or very unusual lottery winner, please get in touch, I am @MikeRampton on Twitter.)

The song was going to be made into a movie at one point – not the maddest of ideas considering theme park rides were being adapted at the time – and that might have cleared things up, but it never came to pass.

Years ago, the web was awash with rumours that Avril had in fact died at the height of her fame and been replaced with a lookalike named Melissa. It was, of course, nonsense, and the Brazilian blogger who started the conspiracy theory freely admitted it was all nonsense, but it still got global news coverage, with reputable sites scrutinising pictures taken a decade apart to see how a human body might be altered by the passage of time. It was dumb, it was all dumb. The thing that is worth thinking about, though, is this: who else had death/replacement rumours spread about them? Paul McCartney, and to a lesser extent Elvis. That's kind of a solid proof that she's made it, that she's getting the same treatment from overexcited fans as a flippin’ Beatle and the King of rock’n’roll.

She genuinely came close to death more recently, though, or at least felt like she did, battling Lyme disease. She’s not been replaced: she’s unkillable.

5Many alternate versions of a Ramones-esque mega-hit, leading to a legal ruling

Avril’s 2007 hit Girlfriend was recorded in eight different languages: English, French, German, Mandarin, Japanese, Italian, Portuguese and Mandarin. While some of her pronunciation leaves quite a lot to be desired (according to this multinational panel assembled at the time, anyway), it’s an impressive endeavour. Who else can do that? Nobody. It became the first music video on YouTube to hit 100,000 views (this was a long time ago; YouTube was new) and became the best-selling single of 2007.

Of course, like so many things she’s done over her career, it came with crap bits, too. She was sued by the writers of the 1979 Rubinoos’ song I Wanna Be Your Boyfriend, which she rightly pointed out sounded a lot like The Ramones’ 1976 song I Wanna be Your Boyfriend. The case ended up quite sensibly concluding that quite a lot of songs are about wanting to be someone’s girlfriend or boyfriend and that to claim any one person had invented it would be silly.

At the end of 2016, Avril stood up to one of the most powerful men in the world, accusing him of bullying. Good on her. There’s too much bullying in the world, and it’s unjustifiable, and bullies deserve to be taken down a notch.

The thing is, she was accusing the powerful man in question of bullying, er, Nickelback. Facebook CEO Mark Zuckerberg appeared in an ad for his Alexa-alike Jarvis, asking it to play some good Nickelback songs, only to be told there aren’t any. Avril (who used to be married to frontman Chad Kroeger) leapt to their defence, pointing out that they’d sold 50 million records, actually.

It was a confusing moment for a lot of people. Bullying is bad, but was this bullying? Do sales equal quality? Might a charmingly self-deprecating response from Nickelback have shifted another five million? No idea. It was baffling, but everyone in it appears to still be monstrously wealthy, so well done all round.

Sir Ian McKellen has played Gandalf, Magneto and the Grim Reaper, King Lear and Richard III, appeared in Waiting For Godot and Amadeus, yet his finest lines may have come when introducing Avril on The Late Late Show with Craig Ferguson in 2007.

He said, “William Shakespeare once wrote, ‘If music be the food of love, play on,’ and though separated by centuries and continents, those words might have been written about tonight’s musical guest. She is a punk chanteuse, a post-grunge Valkyrie, with the wounded soul of a poet and the explosive pugnacity of a Canadian. Her lyrics ring with the clarity of a single bell piercing the moonless night. ‘You make me so hot. Make me wanna drop. You’re so ridiculous, I can barely stop.’ Ladies and gentleman, Avril Lavigne.”

8A clear example of double standards

For a while, it seemed like everything Avril did, she was given grief for, in a way it’s hard to imagine happening if she was a dude. Early in her career she was dismissed in some circles as being talentless and inauthentic for using a songwriting team – that songwriting team later worked with Korn. Her sound was criticised for being too poppy and polished – it was mixed by an engineer who worked with blink-182. Other bands made fun of her affectations in their videos, before reinventing themselves on their next album cycles as waistcoat-clad grown-ups. Throughout it all was the idea of authenticity, that she somehow wasn’t credible due to being – what? Female? Young? Pretty? Successful? Canadian?

Any biographical detail people picked up on was used against her. She used to sing country music as a kid – hey, that’s not punk, right? Inauthentic! She was a kid, though – nobody comes out of the womb and gets straight into hardcore. She was into the music her parents introduced her to until she got her teens then got into her own stuff (some of the material she submitted for her debut album was rejected by the record company for being too metal after she’d got heavily into System Of A Down). That’s… that’s what everyone does?

Too rock for the country world, too punk for the pop world, too pop for the punk world. Maybe, Avril, this world in general is just not good enough for you.