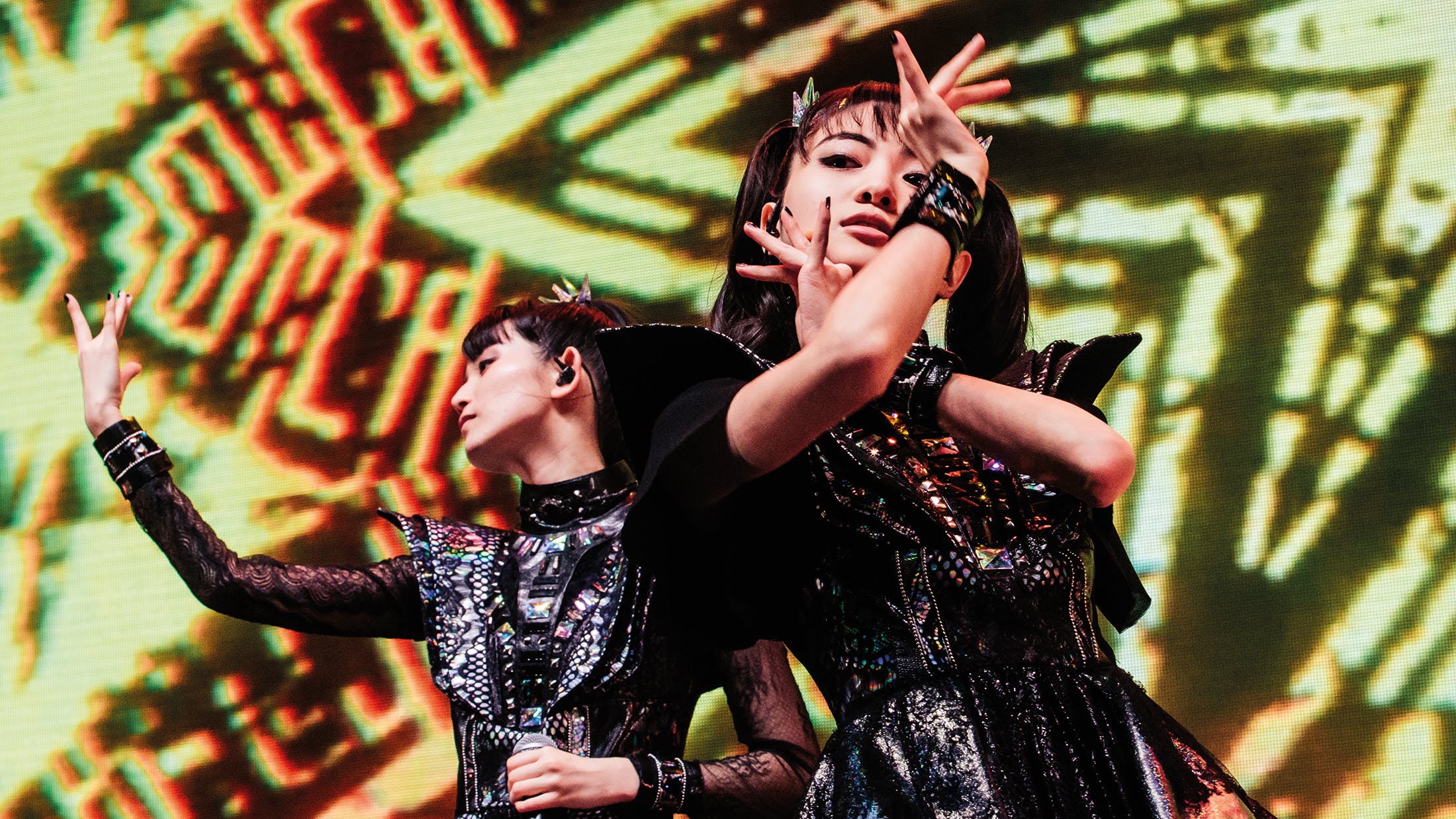 It’s about an hour before BABYMETAL are due onstage at Hammersmith’s historic Eventim Apollo. In a room deep within the venue’s labyrinthine warren of backstage corridors, the pair have just been surprised with a blue, glittery cake so large that singer SU-METAL is struggling to hold it up on her own. Presented to the duo by their team to celebrate selling out tonight’s show, it looks like it has landed straight from a bakery on Neptune.

The fact that they’re moments away from performing to thousands of fans doesn’t appear to have fazed SU-METAL or MOAMETAL in the slightest. Dressed in their black and silver space-age battle armour – featuring the kind of sharp shoulder pads you wouldn’t want to mess with – the pair seem light and focused as they pose together for Kerrang!’s photographer, throwing their Fox God hand gesture like it’s second nature. Despite being so young – SU-METAL is 22 and MOAMETAL is 20 – they have a cool, relaxed air that reminds you that they’ve been captivating rooms as BABYMETAL for almost a decade now. Experienced professionals, they’re less focused on nerves than on harnessing their excitement to ensure a successful show.

“I’m always excited about going onstage, as I’m eager to know what kind of audience is waiting for us,” says MOAMETAL. “When I hear the fans making noise while we’re backstage, impatient thoughts like, ‘I want to see all of you as soon as I can!’ go through my mind.”

Outside the venue, the fans seem just as impatient, as a long line of distinctive figures snakes its way along the concourse. Some have been here for hours – unveiling homecrafted signs and big billowing flags. It seems like anyone who isn’t dressed in black opts for entirely the opposite end of the spectrum. There are flashes of neon hair clashing with bright BABYMETAL T-shirts, while cosplayers appear in the group’s kawaii-goth uniform or as members of their ghoulish KamiBand. At times, it feels like stepping into a slightly altered reality.

Such vibrant scenes have played out before at BABYMETAL’s previous London shows. Onstage later tonight, SU-METAL will even call the capital their second home. This past week, however, marks the first time that crowds like this have gathered across the country, as the Japanese band have taken their maiden headline tour across the UK, stopping off at Glasgow, Cardiff and Manchester.

“Every time we do a performance in London, fans welcome us with such amazing energy, and I’m always eager to do more shows there,” says SU-METAL. “For this tour, we have been able to go to different parts of the UK, so I’m so grateful to visit new places and have so many people come see us perform.”

This tour is also the first time that these shores have witnessed a full arrangement of songs from the group’s third and most accomplished album, METAL GALAXY. When that record arrived late last year, it was likened by its creators to a spaceship visiting different faraway planets, due to its eccentric mix of styles. Given the colourful scenes surrounding the Apollo tonight, it’s not hard to imagine that spaceship has just landed in London.

READ THIS: BABYMETAL: "Communication became a lot more important to us this year"

From the inside, the venue’s art deco interiors mirror BABYMETAL’s futuristic visuals. Enthusiastic fans huddle around several merch points. The band famously broke the record for selling the most apparel ever at Wembley Arena in 2016 and tonight there are tour shirts, flags, vinyl and winter hats on offer. Everything is black. Support comes from Southampton goth-punks Creeper, whose knack for twisted storytelling and theatrics puts them in smart alignment with the headliners, and they receive a toasty reaction from the early congregants.

Passing through the narrow corridors, it’s clear there’s no such thing as a typical BABYMETAL fan.There are metalheads in studded jackets, old-school rockers in Harley-Davidson bandanas, unmistakable emo kids, and theatrically made-up goths. You’re just as likely to end up stood next to a lairy teenage couple in matching tie-dye outfits as you are a family with young children all wearing ear-protecting headphones. It shows the truly diverse following BABYMETAL have cultivated.

“I was extremely happy to see so many children and lots of girls!” says MOAMETAL about the tour. “I saw girls dressed up like us and I feel so blessed to have such warm fans. I also spotted a lot of hardcore metalheads, and seeing them singing and dancing along to our music is always such a fun sight. It makes me so incredibly happy.”

Just as BABYMETAL’s music appeals to a broad church, the range of styles and influences that the group have incorporated into their traditionally heavy metal sound has been growing exponentially. The diverse list of guests on last year’s METAL GALAXY only scratches the surface of how adventurous things got on that record, with Joakim Brodén of Swedish power metal band Sabaton, Thai rapper F. Hero and Alissa White-Gluz of Swedish death metallers Arch Enemy all making appearances. It means that the band’s set for this tour has become an extravagant pic’n’mix of daring flavours, visuals and performance styles.

“Each song has its own unique colour, so it’s entertaining watching the differences in our fans’ reactions when we perform,” says SU-METAL, comparing how this tour measures up to their previous UK performances. “I feel that this album has further widened the range of what BABYMETAL is all about.”

READ THIS: In Pictures: BABYMETAL at Glastonbury Festival 2019

As if preparing tonight’s audience for their journey across these different worlds, the first visuals shown on the giant screen behind the stage are of a diamond spacecraft cruising beyond distant planets, backed by the emotional surge of intro track FUTURE METAL. Then the lights dramatically cut out, only to reveal three dark figures stood like statues when they turn back on – SU-METAL, MOAMETAL and one member of the Avengers, the group of dancers that have been drafted in on rotation since the departure of YUIMETAL in 2018.

Things kick off properly with the pinballing DA DA DANCE, which is backed by graphics that make it look as if the crowd is being launched into a dying sun. It’s an opening that sees the energy in the room skyrocket to a level it never comes down from, as the band shift between their many different forms. No two songs are alike; the kaleidoscopic Shanti Shanti Shanti infuses traditional Indian musical elements into BABYMETAL’s heavy make-up, swiftly merging into the bleak digital blast of BxMxC, all matched by a dizzying choreography that has the girls stomping around like giants.

The band’s stage production is dished out in expertly measured doses, to ramp up the tension and emotions. The conventionally syrupy Gimme Chocolate!! opens instead with an eerie horror movie intro, complete with pyro fireballs that carry heat all the way to the back of the room. Perhaps the most striking visuals accompany Distortion, where nightmare figures and a crumbling modern city shift against a blood-red backdrop, as SU-METAL’s rapid delivery makes her sound as if she’s warding off an evil spirit. It’s genuinely unsettling.

READ THIS: The 10 moments that made BABYMETAL global superstars

But alongside these PG-13 moments come plenty of light-hearted laughs. The wonderfully silly Oh! MAJINAI, for example, is accompanied by dozens of CGI Joakim Brodéns (the Sabaton singer’s vocals are piped in for the song) standing shoulder to shoulder and all performing a leg-kicking Russian Cossack dance, while BABYMETAL execute their own variation. It feels as bizarre as it does brilliant, and a reminder that there are very few rock bands that can flip between tension and comic relief as perfectly as BABYMETAL.

In addition to the group’s exhausting dance choreography, we witness SU-METAL and MOAMETAL carrying huge military-style flags during the epic closer Road Of Resistance, which they hold proudly behind their heads as heroic riffs wail out behind them. And while the ongoing story of the Fox God largely goes unmentioned this evening, the girls march around during Megitsune, holding up their animal deity’s mask in front of their faces like they’re about to perform an ancient ritual. “We want to have an amazing time with you!” says SU-METAL in English, and the crowd duly roars back.

The connection BABYMETAL share with their fans is undeniable, which is all the more impressive as their music transcends language barriers. At times, it’s simply organic. The expert players in the supporting KamiBand – whose identities remain hidden behind freakish masks as they line the back of the stage – help to provide the heavy ammunition for the frenzied pit, which, during songs like KARATE, swells like a beast. Then there are moments when more au fait fans know the cues to follow – like when half the crowd start spinning items of clothing above their heads during the explosive PA PA YA!!. It’s a room that seems to be permanently ignited for the duration of the band’s set.

“People have welcomed us back to London as if it’s our home,”notes SU-METAL afterwards.

As the final strains of Road Of Resistance draw proceedings to a close and BABYMETAL wave goodbye with genuine glee, there’s the sense that, over years of touring, the band have built their shows to be true sense-baiting heavy metal spectacles, and also spaces founded on community, where fans can be themselves. Theirs is a world free of pretension, where everyone is welcome.

“I sincerely hope that when people see BABYMETAL live,” reflects MOAMETAL, “that they return home happier.”

Judging by the joy on the faces of those leaving the venue tonight, it feels like mission accomplished. BABYMETAL continue to prove they’re a band unlike any other.