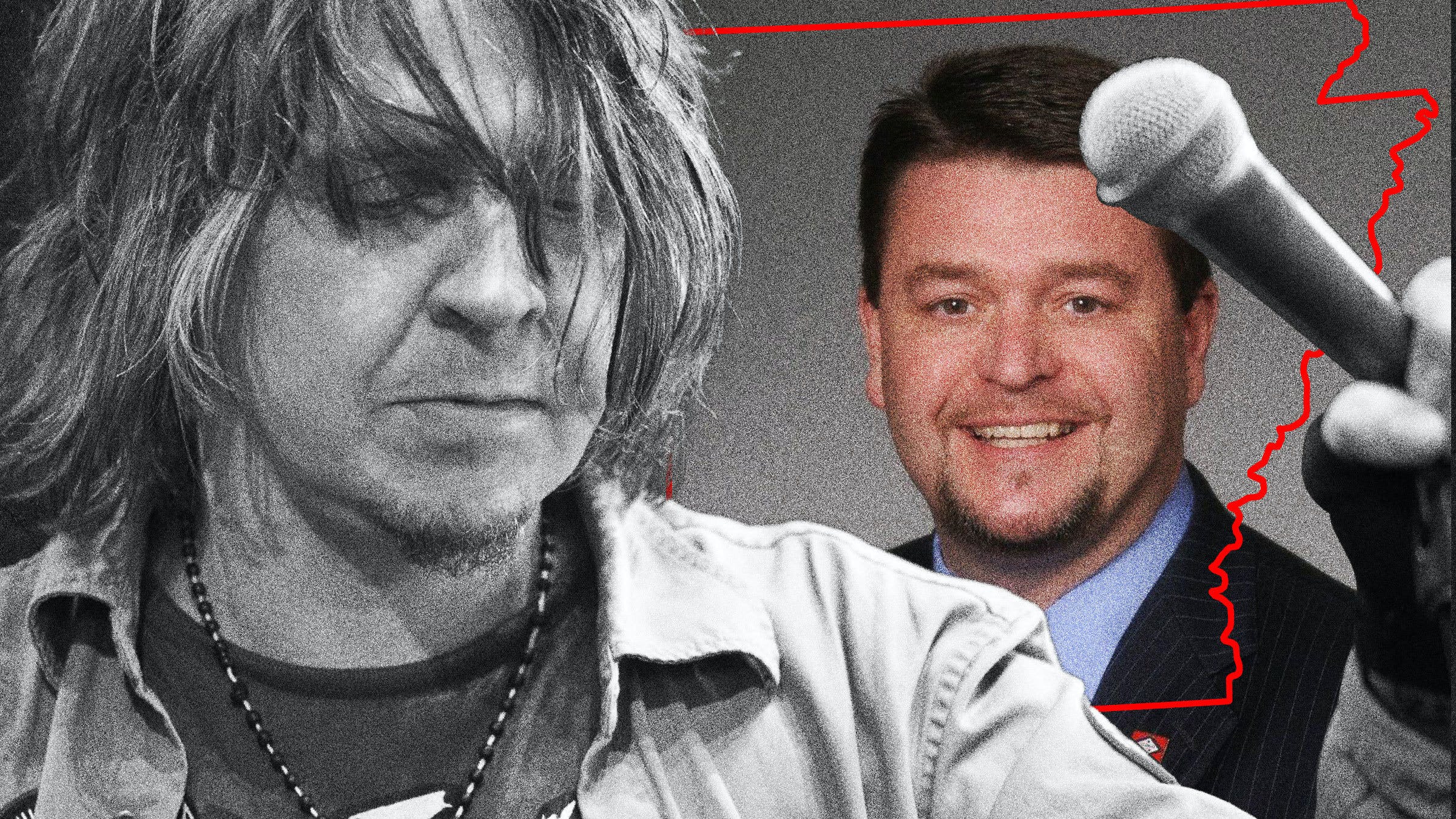 As we reported yesterday, Eyehategod’s May 24th show at Vino’s in Little Rock, Arkansas, got all kinds of inadvertent, hilarious attention when the conservative local State Senator Jason Rapert caught wind that his likeness was used on the show flyer -- badly photoshopped to look like he was eating a baby. He posted screenshots of the event page to his Facebook, along with a plea for people to boycott the venue:

As of now, the show is still happening, so we called up Mike IX to get his take on things.

Kerrang!: So, tell us how this whole controversy started.

Mike IX Williams: Well, the people who run the club [for the show] are good friends -- they treat us great, and they always have. We’ve played there a number of times. And it’s basically just a restaurant with a room for bands to play. We did not make the flyer -- someone in Little Rock did -- but it’s just your typical punk-rock or metal show flyer. Nobody probably thought anything of it while making it. I mean, I’m not from there, so I didn’t know the politics of [Senator Jason Rapert]. I do now, and I realized that he’s just a complete piece of shit.

So it was just an event posting on Facebook and it blew up into this thing.

And at that point, the Senator shared it on his Facebook page and made a way bigger deal out of it?

Yeah, I mean, of course that’s going to happen. I’m sure it’s not bad for him either, but it’s been great for us. People sometimes think that my band is just a bunch of ignorant losers, but we actually believe in these things and feel like it’s something that should be fought against. And it’s a great way for me and the band now to put it out there that people like this guy should be fucking destroyed. So it’s just so funny, it never would have gotten all of this attention if not for this guy’s post.

When you found out about this guy saying these thing about you, did you immediately start Googling his policies?

Of course. I wanted to know more about him. I mean, I’m from New Orleans, so I didn’t know his exact position on these things. So I had to check in on him. But I had heard from other people’s posts and local people in Little Rock what kind of a person he is, and a lot of his ideas that he’s thrown out there in the past.

What ideas did you read about that you were opposed to?

Well, he tried to ban medical marijuana in Arkansas -- I don’t think he succeeded, though. And [he’s very against] women’s rights -- I believe in being pro-choice. He’s just one of these people that are gonna be against pretty much anything that human rights are. He said something like, “We’re not gonna let minorities run roughshod over what you believe in!” Just stupidity.

I mean, those are his beliefs. I believe in freedom of speech. That should be allowed. But [I don’t agree with him], and if I have a chance to say something about it, then I will.

In this situation, it feels like you’ve been given this huge opportunity and platform to share your beliefs on those types of opinions.

Absolutely. I mean, I’m not a politician. I’m in a band. I’m a musician -- an entertainer for fun, and for people to let off some steam and have a good time. That’s what I’m about. So I’m in no position to argue politics with anyone. But I know what I believe in and I know what’s right. And I see that he’s against basic human rights, so it is a good chance to say something. And I thank him for that.

What’s been the response on your end? Are you fielding tons of garbage on your Facebook?

I haven’t gotten any personal messages. I haven’t checked messenger or anything today, but the response has been great. Everybody is on our side. But these are also coming from our people, you know? There were some comments on the Senator’s page that were supporting him, which is great! That’s their opinion. But on our side it’s been nothing but love.

Is this the first time that a public figure has made a fuss about your name?

No, not at all. There’s been shows that have been canceled or tried to be canceled. One time in Knoxville, Tennessee in the ‘90s there was a local preacher or reverend who had been calling the club trying to get the show cancelled due to the name. And in New Orleans once, someone’s parents found a flyer in their kid’s room. It was a Graveyard Rodeo/Eyehategod flyer. And I guess it had some graphic imagery on it, which is typical in this scene. But apparently this girl had run away from home, and they had found the flyer and made this huge deal out of it. Eventually, another show happened on Halloween night and the local Christian church came out to protest the show. It wasn’t an Eyehategod show, it was my other band called Crawlspace. They were carrying giant crosses and big banners saying “REPENT” and “YOU’LL BURN IN HELL!” They marched around the club. It was an absolute waste of their time, but of course they did it anyway. I guess it made them feel better, so that’s good. I’m glad for them.

It’s obvious the name was made for shock value. It’s not a secret. So there are going to be people who are against that. I just thought, in this day and age, maybe it didn’t shock people anymore. But apparently it still causes a stir, which makes me very happy.

In this situation, it seems like your name wouldn’t have even made a blip on his radar, but he freaked out about...what, a clearly satirical picture of himself with a baby in his mouth?

Yeah. He’s really anti-abortion and that seems to be one of his main platforms. He really likes telling women what they can and can’t do with their bodies. So I thought the eating-the-baby thing was a great idea.

The irony of all of this is that you’re so pro free-speech, and you would never tell him he can’t say things like that. And yet he’s trying to bring you and the venue down for using your right to free speech.

Yeah, I’m totally for it. He can say whatever he wants to say. There are billions of people and everyone’s got their own opinions about everything. I think it’s a great time for all of this, too, with Trump’s State of The Union address the other night which was horrific. Once again, I’m no politician, but I know what I believe in, and I know what’s right. And freedom is what this country was based on.

I mean, we’re not the most PC band in the world -- there’s a few questionable song titles here and there -- but we did things in our 20s that didn’t seem offensive to us that we’ve learned from. [Editor’s note: The song White N***** has since been changed to White Neighbor, but they still have a song called Sister Fucker.] But it’s absolutely crazy to see someone against all of these things that aren’t bothering anyone. Like same-sex marriage. Same-sex marriage doesn’t bother anyone.

How does it feel that a band name you came up with decades ago still strikes fear in the heart of people like Jason Rapert?

I love it. I fucking love it. This band has been together 30 years, you know? Like I said, I thought the world had become a harsher place since then, or people were jaded. You don’t think it’s still going to cause an impact. But this guy -- he’s truly insulted that he’s eating a baby in this picture. [laughs]

There’s nothing wrong with having a dark sense of humor. A dark sense of humor gets you through life. At the end of the day, it’s fun. We’re just having fun. But we do have beliefs, and we believe in freedom. And we’ll fight for that if it comes down to it.

How will you handle it if there are protesters at the show?

Same way we handle anything. With a grain of salt. We’ll take it as it comes. And if they want to get aggressive, then I’m sure people will get aggressive. But I don’t think it needs to be like that. I mean, things can be solved by talking about it. But these people are so forceful with their views. If they want to be forceful, we’ll be forceful right back. That’s how it goes. Hopefully the show will go through with no problems and no violence, and it’ll be fine. And I suspect it will be.