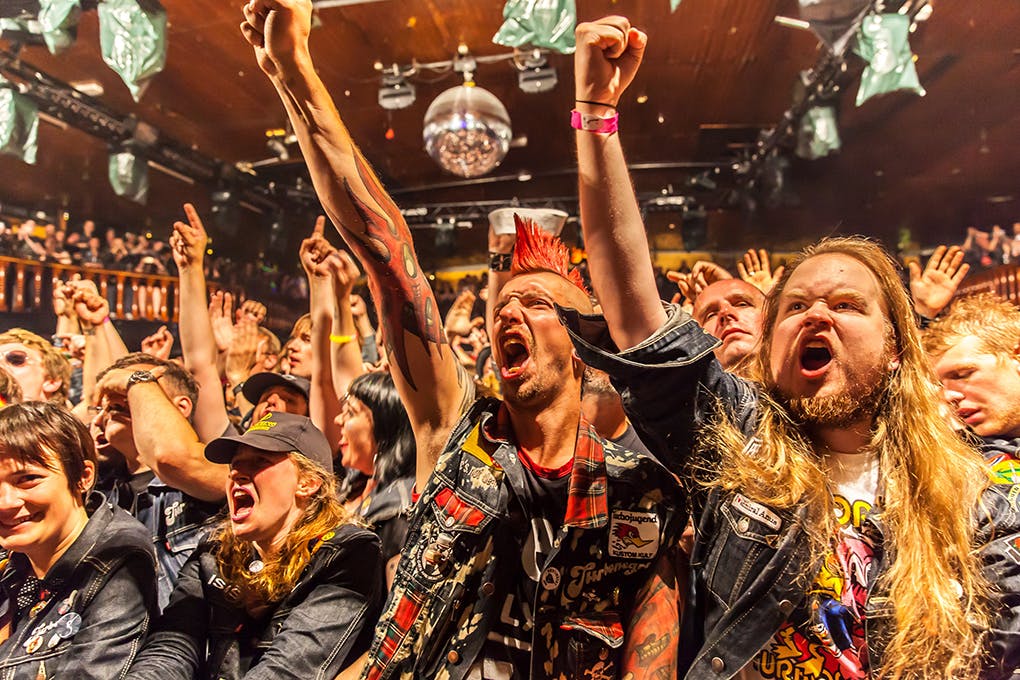 During an unforgiving Norwegian winter in 1988, six punks from Oslo started a band and planted a seed. A seed that would grow into an international denim-clad community fuelled on ‘death-punk’, alcohol and hedonism. That band are Turbonegro, and the community are the known by the name, the Turbojugend.

For nearly three decades, the band have achieved huge success across the globe, bringing their glam/punk/rock'n'roll hybrid to arenas, festivals and even movie soundtracks. The Turbojugend was actually started by the band back in the early '90s  as a tongue-in-cheek answer to The Kiss Army, but nobody could ever have predicted the scale to which it would grow, nor its unwavering, lasting appeal.

The Turbojugend, which some members have termed 'The Hell’s Angels meets The Goonies', is made up 2600 'chapters' internationally and it now exists as something almost completely independent of the band. Along with their signature matching denim jackets or ‘Kutte’ as they’re known – the members are also unified by an ethos of family, acceptance and anti-fascism. The manifesto dictates, 'By joining our association we expect that you do not tolerate fascist or racist behavior in your Turbojugend chapter, and you won’t tolerate members with such tendencies.'

“It all started more or less as a joke when we still were a marginal punk act with close to nobody coming out to see our shows,” Rune Grønn, Turbonegro’s guitarist and one of the founding members of the band, explains. “We kind of liked the irony of a band with no fans having a fan club!”

In the early days they used to send a signed “diploma” to anyone who wanted to join the club. “We thought that if Kiss can have an army then Turbonegro should have a navy! But we never expected it to become anything like what it is today.”

The band originally broke up in 1998 just after the release of their biggest album at the time, Apocalypse Dudes, due to their then singer, Hank Von Helvete’s struggles with drug addiction. Unbeknownst to the members, during this four-year hiatus the Turbojugend grew massively and the band started to become a cult phenomena in the rock world. At their reunion shows in 2002 they were met with huge crowds. “We were totally blown away by the reception!” remembers Rune, “We really had no idea.”

Dubliner Naimah 'Nimmy' Ouafi has been a member of the Kingston chapter for just under a year and she recently received her bespoke jacket in the post from Norway that displays her warrior name; ‘Notori-ASS N.I.M.'

“What attracted me was the sense of community; that it’s one big family,” she says. “It opens doors for meeting new people and having a good fucking time!”

Although this community was going strong before the internet, the Jugends have embraced the network age and it has connected the chapters from across the globe.

“Through connecting with Jugends online, I’ve travelled to big TJ parties in Hamburg and Dublin in the past few months,” she adds. “They were great, I met people from California, New York, France, Finland, Sweden… and probably loads of other places, but I was too drunk to remember!”

There’s a level of trust and accountability in the TJ community and Nimmy stresses how that if someone is an “arsehole”, then the whole community soon knows about it. “It’s like punk rock couch-surfing!”

The members we met all spoke ardently of this welcoming, collectivist nature. “When you join you basically get a free passport to anywhere in the world,” says Swedish-born Thomas Evrenos. “For me, it’s all about having drinking buddies. I went to New Orleans last year without knowing anybody and I contacted the chapter there. We went to gigs and dive bars and they showed me around. I had five hysterically fun nights with them.”

Thomas is the president of the Petticoat Lane chapter in London and runs a Turbojugend bar in Brighton called The Pipeline. They throw TJ parties there, put on gigs and members even get discount at the bar. Politics doesn’t always dominate the conversations during Jugend meet-ups, but the political undercurrent can be felt permeating throughout the fan club.

James has been the president of the Soho chapter for the past six years and is a member of the London chapter, splitting his time between that, playing in a hardcore band and teaching English Literature at a secondary school.

Several bands have started within the fan club, channelling the sleaze and rock'n'roll debauchery of Turbonegro, while bringing their own flavour. On British soil, Brighton’s Rotten Foxes are flying the flag for the TJ with their boozy hardcore punk. They’re all part of Brighton chapter with, their guitarist being the vice president, and they just finished a tour of decadent European TJ parties.

“We played the TJ party in Dublin earlier in the year and met these French Jugends,” says vocalist Rhys Toye. “A few weeks later I put online that we wanted to do a European tour and these guys arranged parties all over France. We arranged it all on Google Translate because they don’t speak much English! The gigs were crazy. We’d turn up and there was hundreds of beers, bottles of Cognac, speed, it was great!”

It’s not just friendships that are cultivated within the fan club though, there’s also punk rock romance. The private ‘TJ Singles Worldwide’ page on Facebook has over 200 members. Virginia Ranson was part of the Appletown chapter, based in Piandelemeto, Italy and back in 2010 she saw a post on a TJ Facebook page. The post was from Jeremy, a member of the River City/Winnipeg chapter over in Canada,

“I knew we’d have a few things in common, good taste in music for a start!” she laughs. “Also, joining the TJ means you agree with the rules in the manifesto, so you know by default that some beliefs will align.”

After months of Skyping and visiting each other, Jeremy proposed and in 2011, they married. “We even had our honeymoon at Weltturbojugendtage!”

‘WeltTurbojugendTage’ (German for World Turbojugend Day) is a colossal annual celebration that takes place in St Pauli, Hamburg. The two-day event attracts thousands of TJ members and is host to all kinds of parties and gigs. The band themselves even played their comeback gig there in 2011, introducing, Tony Sylvester as their new singer, blurring the lines between band and fan even further. Tony, it turns out, was the president of the very first chapter in London.

Elsewhere in the world, the Oslo chapter and the St Pauli chapters are widely recognised as the biggest, but just like the members themselves TJ chapters exist in all shapes and sizes. The Chiang Mai chapter, in Northern Thailand has just two members and is the only sober chapter, for example. The president, Mike 'McDasstardly' Miller, has been sober for 14 years and the vice president, Joe ‘Nihilasst’ Mauma, has been for 22.

“As soon as I formed the chapter, registered it and got on Facebook groups I was welcomed with open arms,” Mike told me. “It really was like what being a skater in the '80s was like for me – instant approval, because I'm not racist, homophobic, transphobic or oppressive, I was welcomed."

Mike struggled with heroin and alcohol addiction from when he was a teenager until he was 32, but now, as a 46-year-old clean-living rocker, he said he is more than happy to be a new friend and tour guide for members visiting Thailand.

“I just feel like I want to live up to the spirit of it and make sure our chapter does too. Rock'n'roll, friends, open-mindedness and inclusivity.”

With a rising feeling of social disarray in Europe and a future of uncertain outcomes, communities like the Turbojugend are stronger and more important than ever. Banding together with like-minded people, even if just to drink beer and chat about music every fortnight, offers a much-needed connection in an ever-isolating world. The Turbojugend transcends the band they love and the party-lifestyle they champion. It’s an inclusive post-capitalist remedy to the brutal individualism of late-capitalism. It is to be admired and learned from. Viva collectivism, viva The Turbojugend!

Turbonegro's latest album ROCKNROLL MACHINE is available now on Scandinavian Leather Recordings. Check it out below.

The Norwegian singer's family have confirmed his passing, aged 49...