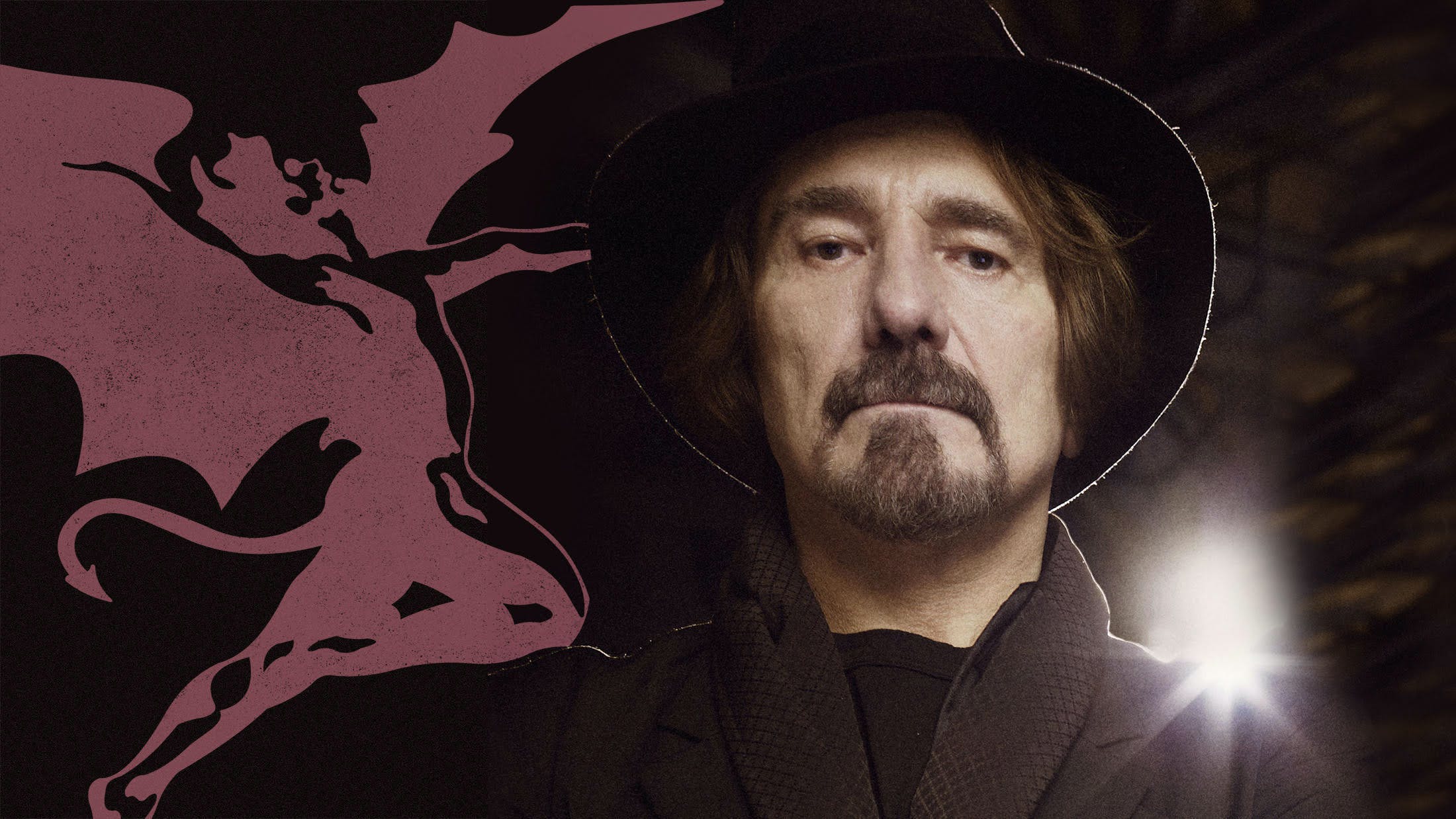 There are many reasons why Geezer Butler is one of rock’s greatest legends. His bass work in Black Sabbath, as so finely demonstrated in the opening minute of N.I.B., would help lay the sonic foundation for generations to come. But it was also his lyrics, being the band’s principal wordsmith during the Ozzy Osbourne-fronted years, that would so menacingly furnace satanic imagery into their game-changing apocalyptic blues.

'What is This That Stands Before Me? Figure In Black Which Points At Me...' (Black Sabbath, 1970)

Whatever it was that visited a young Geezer Butler tucked up in bed that fateful night, the world is in its debt. “I was sleeping and got woken up by a weird presence in the room,” he once told this writer. “It really freaked me out, I could see this dark thing staring at me from the end of the bed!” The devilish encounter would inspire the words to Black Sabbath’s infamous self-titled anthem, which Geezer later revealed was co-written with Ozzy before the singer decided to take a backseat from penning lyrics. Coupled with Tony Iommi’s earth-consuming riffs, it was the song that ultimately give birth to an entire genre of loud, unholy noise.

“The song is about the Devil falling in love and changing to become a good person,” noted Geezer in 1992 documentary The Sabbath Story: Volume One, explaining “he actually falls in love with a human being and totally changes his identity.” The bassist then went on to admit the original title originally had nothing to do with nativities in black or anything sinister whatsoever, but rather drummer Bill Ward’s beard, which “looked like a pen nib".

'They Can Put A Man On The Moon Quite Easy, While People Here On Earth Are Dying Of All Diseases' (Wicked World, 1970)

“One small step for man, one giant leap for mankind,” famously remarked Apollo 11 astronaut Neil Armstrong as he took his first steps on the moon in July 1969. Back on earth, however, Black Sabbath’s bassist was somewhat less enthused – weighing up the devastation brought by war, disease and famine against any notion of human advance. Themed on the philosophical rather than the paranormal, it was also the first song the group had written after changing their name from Earth to Black Sabbath.

'Politicians Hide Themselves Away, They Only Started The War, Why Should They Go Out To Fight? They Leave That Role To The Poor... Yeah!' (War Pigs, 1970)

More politically-charged observations arrived with their sophomore album later that year, Paranoid’s opening track pointing the finger at sorcerers of death’s construction and the poisoning of brainwashed minds. While, for many, its most memorable line lies in that first verse, infamously rhyming the same word twice – it’s Geezer’s condemnation of failing world governments from a working-class perspective that hits hardest. The recording sessions had been begun a month after the Kent State Massacre, where the Ohio National Guard opened fire on unarmed students protesting against the Vietnam War.

'Make A Joke And I Will Sigh, And You Will Laugh And I Will Cry, Happiness I Cannot Feel, And Love To Me Is So Unreal' (Paranoid, 1970)

Though they don’t actually contain the word paranoid, it’s somewhat ironic the lyrics to Sabbath’s first and only Top 10 hit on home soil came from a place of deep mistrust, isolation and misery. They’d use similar terms when describing their experiences growing up in Aston, Birmingham. The second album’s title-track would be the single that launched them into the big league, sowing the seeds for all the chaos to come.

While there are no mistakes to be made in what Geezer was getting at when he penned the lyrics to this quintessential stoner anthem, its title actually came from a more legal source – the words on a packet made by Irish cigarette manufacturers Sweet Afton. The idea of mind expansion was clearly something the four members were keen on, romanticising their experiences in this ode to the drug which left them wanting more of its kind.

'Leave The Earth To Saran And His Slaves, Leave Them To Their Future In The Grave' (Into The Void, 1971)

On the closing track of stoner metal blueprint Master Of Reality, Geezer Butler was describing Hell on earth – devastated by pollution, shields of darkness and eternal voids at the hands of human interference and warfare. Ahead of its time in terms of environmental awareness, it’s more than likely witnessing Birmingham’s smog-belching factories first-hand as a child had a part to play in his logic.

8. 'My Eyes Are Blind But I Can See, The Snowflakes Glisten On The Trees, The Sun No Longer Sets Me Free, I Feel The Snowflakes Freezing Me' (Snowblind, 1972)

A year later, life was moving incredibly fast for Sabbath’s four members and in more ways than one – as documented by this love-letter to nose candy. “We only started using [harder] drugs from Vol. 4 onwards,” Geezer told this writer in 2017. “The first few albums were recorded reasonably straight, maybe a few joints were toked. The serious stuff was imbibed when we recorded Vol. 4 in LA and then on Sabbath Bloody Sabbath.”

'The People Who Have Crippled You, You Want To See Them Burn, The Gates Of Life Have Closed On You And There's Just No Return' (Sabbath Bloody Sabbath, 1973)

With creative frustrations heightened by rocketing substance abuse and fatigue, Sabbath’s future didn’t look quite as secure as it once did. Relocating back to London after the initial sessions for album number five proved unfruitful in LA, they ended up writing a psychedelic masterpiece. “The lyrics to Sabbath Bloody Sabbath were about the Sabbath experience: the ups and downs, the good times and bad times, the rip-offs, the business side of it all,” reflected Butler in the notes for their 2004 Black Box collection. “[The line] ‘bog blast all of you’ was directed at the critics, the record business in general, the lawyers, accountants, management, and everyone who was trying to cash in on us. It was a backs-to-the-wall rant at everyone.”

Tony Iommi’s riffs may have been razor-sharp on this proto-thrash fan-favourite, but Ozzy Osbourne’s lyric sheet read more like an existential love poem, referencing silver wombs, magic oceans and unicorns in the sky. As Geezer admitted himself, these were Sabbath’s most hedonistic years and the substances were only getting stronger.

'The Sleepy City Is Dreaming The Night Time Away, Out On The Streets, I Watch Tomorrow Becoming Today' (Dirty Women, 1976)

Though few would say Technical Ecstasy measures up to the high water-mark of Sabbath’s prior releases, its closing track remained a setlist staple right through to their final show in Birmingham two years ago. According to Geezer, the concept came to him while the band were in Miami travelling to Criteria Studios for the Technical Ecstasy sessions, having to pass “hookers and dirty old men every night, hiding in alleyways”.