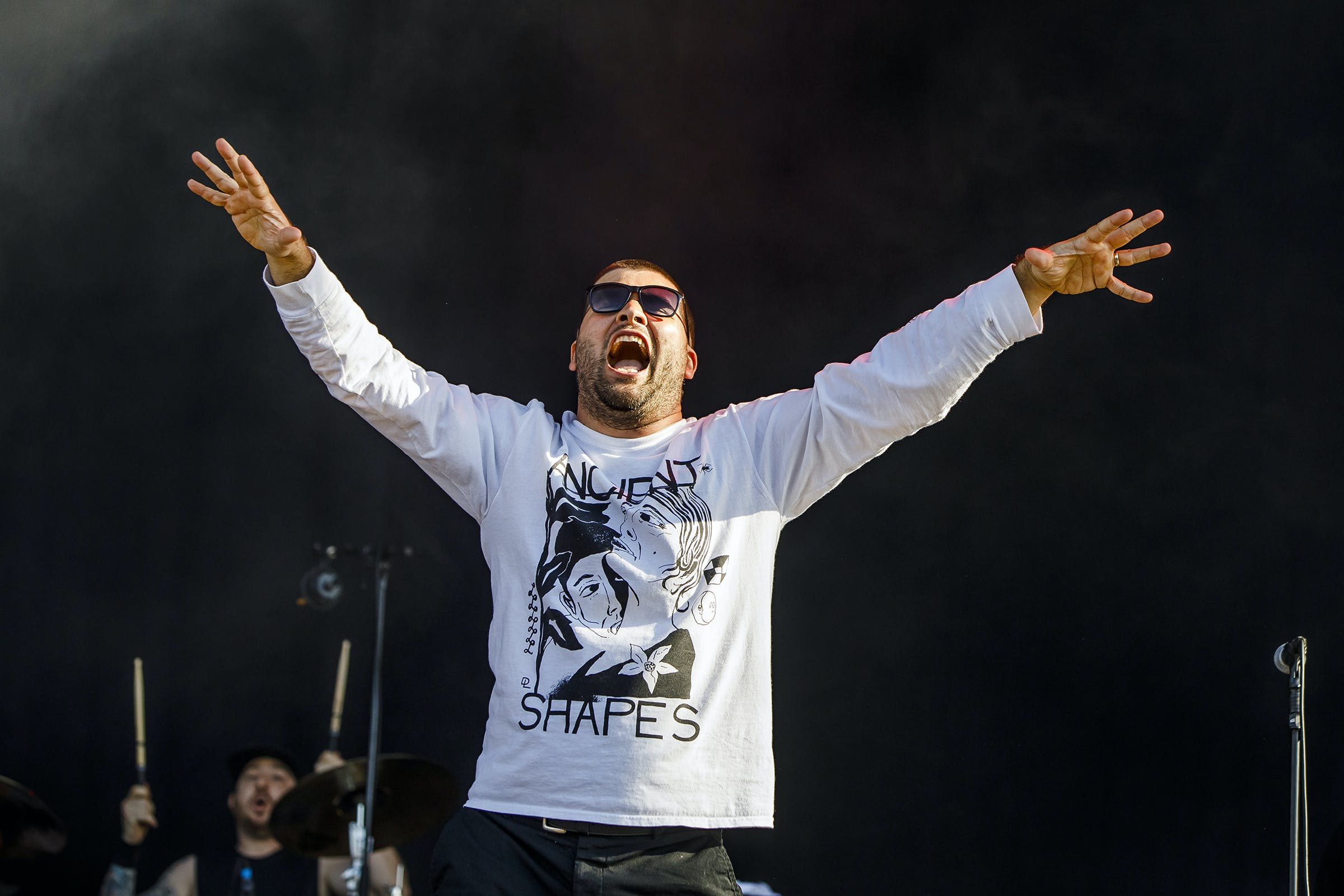 The Only Band Ever Alexisonfire are back! Earlier today they released their first new music in almost a decade, and announced some mahoosive shows in London, New York and beyond. It's safe to say that 2019 is going to be very interesting again for the post-hardcore legends. But where did this new track come from, and why now? Will we be seeing more of Alexisonfire over the next 12 months? We caught up with vocalist George Pettit to talk about new single Familiar Drugs, how things are in AOF camp, and what it's like to be teasing fans for so long.

How did it feel sitting in a studio together again and making your new single, Familiar Drugs?

“It was great! It’s interesting and fun, and it’s great to see Dallas [Green, vocals/guitar] in the studio, honestly, because he didn’t take a break [after the break-up] and nor did Wade [MacNeil, guitar]. I think a lot of us went and did other things a little bit here and there, but those guys are just dialled in. There’s no distraction, they’re completely focused and driven to working in the studio. It’s interesting to watch them do their things, and I can kinda take a back seat, I’m not going to tell Dallas how to play his guitar, or tell Wade how to play the guitar, so I take a back seat and watch those guys do what they do. It’s been inspirational, you see how powerful it is as a band, and it kinda has an effortless quality to it. When we get back together, you’re nervous at first and question whether we can make a song, but by the end of the day you’ve got a song, and we feel good about it.”

When you guys initially called it a day back in 2011, it felt like there was some hostility surrounding it. But the reality is you've remained really good friends ever since…

“Yeah! There’s no doubt there were moments of discomfort. We broke up and that was it. There was this moment of discomfort: you have to relearn how to exist in society without this band that you’ve pretty much been in since you were a teenager. Now you're an adult and you've give that sink-or-swim moment where you have to find something to do outside of touring and making music, and I think we all landed on our feet – that's definitely made things a lot easier. We can come back to it now and there's no real pressure to do anything, because we've all landed somewhere in life and we can all do our own things outside of this band. Now the band is just about fun and doing things that are enjoyable.

"We're not doing it too much that we are numb to it, which was something that was happening a long time ago; you’re playing in the band and then you’re touring eight-to-ten months out of the year, and you lose a bit of excitement. But we do it so sparsely that I get nervous now. We are going to deliver, but it's fun to feel nervous again!"

Everything sounds pretty positive. Would you say this is the best place Alexisonfire have been in?

“I think if you’re coming to see us play live then I would say that. I would say that this is the best era of Alexisonfire, and I think we are playing better now than we were back in the day. I think our songwriting is better, too. I mean, honestly, over the years we've gotten extremely good at listening to music, and I think that’s it. I am very, very critical of music all the time, and I apply all those critiques to myself. Sometimes it makes it hard to write because I am extremely critical, and I have very specific tastes and things like that. I think we are better at self-editing now than we were back in the day. Musically, I’m excited about whatever is coming out in the future, and live we’ve got it pretty dialled in. The last few shows have been phenomenal.”

You'd been teasing fans on social media in advance of the single arriving. Was it nice to see them completely lose their shit?

“Yeah, it’s funny. It’s just the way it is now. Management love to release tasting morsels for the people, just tantalise them for a bit before we give it to them. It helps pump up the hype of the tension. It’s been fun, but it has been agonising from my end because I just want it out! So I’m as excited for it to be out as people are as excited to hear it.”

And do you think there’s still space in the market for Alexisonfire in 2019?

“Oh yeah. I keep expecting that market to go away, but it keeps coming back stronger! I’m a bad judge for that, actually. I would say no, but the reality is that there very much is space for Alexisonfire. People still want it and they still want to see us. I feel like the music we are making now isn't some nostalgic throwback. We’re not going to comeback and write [2004 album] Watch Out! again – that is not happening. We are going to move on and do the thing that we’ve always done. I don’t think anything of us would want to be involved if was just some nostalgia thing. This feels very current, and the people have kinda spoken to us. They want it and we definitely want it, so here we are!”