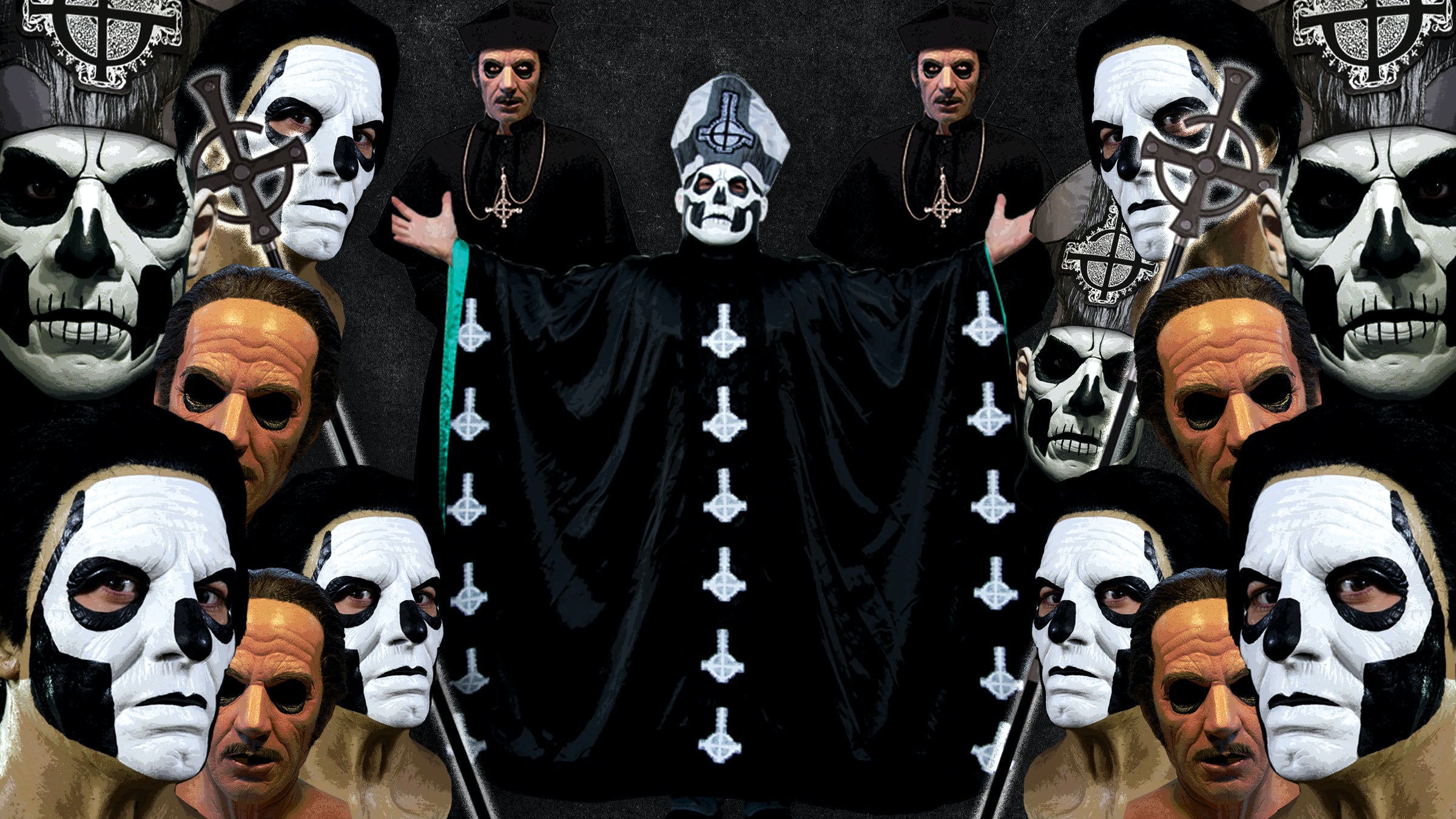 But what’s especially impressive is the plastic weapons bin in the priest-and-devil section, filled with red pitchforks, plastic scythes -- and Papa Emeritus scepters. Just across from that in the Priest/Nun/Devil area, you’ll find Ghost’s officially-licensed Papa Emeritus costumes, complete with robe and mitre (a pope’s hat).

No matter what you think about Ghost's music, but you can’t deny that their Halloween costume game is hardcore. More so, it offers an important lesson to theatrical bands about how to establish your own look and identity in a marketable way. Ghost not only have created personas that metalheads want to wear at Halloween, they’ve done so with an imaginative seriousness that other artists can learn from.

READ THIS: Ghost's Tobias Forge says there will be a Papa Emeritus IV

It’s certainly not like Ghost are the first metal musicians that fans have dressed up as for Halloween, or even the first ones to make Halloween costumes. People have been rocking King Diamond face paint or Alice Cooper eye make-up for years. GWAR have long celebrated fans attending their shows in their own homemade armor. Meanwhile, Slipknot licensed their masks to be reproduced ages ago for widespread purchase. In that sense, Ghost are part of a long tradition of metal bands letting fans join in on the fun.

Above: A "Corey" Slipknot Halloween costume. Comes with "a Slipknot mask."

The problem is that most licensed rock costumes are of artists who we know better as people than as their onstage characters. Slipknot wear insane outfits, but at the end of the day, they're humans -- Corey and Shawn and Mick. The same can be said for Alice Cooper or Rob Zombie, who are open about their onstage personas just being exaggerated aspects of their personalities. It feels odd to wear an overhead latex mask of a guy who you know is from Michigan or eats vegan.

On top of that, the costumes are either hard to get right or easily cobbled together from smaller, cheaper pieces. Real talk, unless you wear an exact Corey Taylor jumpsuit, you’re sort of going as “Slipknot guy.” On the other hand, you can pull together King Diamond with any overcoat, top hat, and greasepaint. Either you need to go to ridiculous expense to be your favorite rock star, or you sort of have to half-ass it.

READ THIS: Theatricality is having a resurgence in rock

But with Ghost, it’s the best of both worlds: you want the licensed costume, but you can get that pretty conveniently in 2019. Sure, you can wear any pope costume and face paint, but let’s be honest, it’s not quite right -- you want those sweeping winged arms and that 'G' with the inverted cross in the middle. At the same time, the licensed Ghost costume isn’t annoyingly hard to put on or walk around in, so it's not a massive inconvenience the way, say, a GWAR get-up would be.

Not only that, but the introduction of Cardinal Copia made it that wearing a Ghost mask is somehow just as appropriate as wearing the face paint. Copia’s unmoving facial prosthetic is deeply unsettling, and makes one wonder if any of the previous Papa’s faces have been painted, or are somehow overlaid with some sort of foam rubber. The result is that Ghost Halloween costume pieces feel totally necessary, right down to the masks, but don't need to be theater-level expensive.

At the end of the day, it's the characters that sell the costumes, and Ghost have done well to cultivate those. The Papas, Cardinal Copia, the Namless Ghouls, these figures don’t exist offstage the way, say, Rob Zombie does. They have their own hand motions, attitudes, personas, all of which only exist when they’re in costume. This allows people dressing up as Ghost for Halloween to be a thing, a figure as unique as, say, Freddy Kruger or Captain America. That sense of identity is crucial to the band’s success, and the fact that it only really works with the right costume makes it a genius way to market the band at Halloween.

For the record, plenty of the credit here is due to Trick Or Treat Studios, arguably the hottest mask- and costume-makers out there right now. Not only do they create all of Ghost’s costumes, but they’re also the source of most of the licensed heavy metal Halloween masks you’ve seen this Halloween -- they produce several lovingly-sculpted masks of Iron Maiden’s Eddie in various incarnations, as well as Motörhead’s Snaggletooth, the Misfits’ Crimson Ghost, and all manner of characters from the Rob Zombie universe. While one or two companies have done heavy metal Halloween costumes well, Trick Or Treat has really put their backs into it.

How do you know Ghost costumes are blowing up? They have knock-offs. Halloween Adventure sells an 'Evil Bishop' outfit that's a blatant Ghost rip-off, while California Costumes is now offering a “Black Mass” outfit, which involves a black-and-red pope outfit, a skull mask, and a gothic pitchfork with candles instead of sharp prongs. One would be hard-pressed to remember when “gothic devil pope” was so popular a costume before Ghost’s meteoric rise. Imitation is the sincerest form of flattery, so these are really victories for the band, even if they do have a Juice Demon sort of vibe to them.

Metalheads have watched in amazement over the last five years as Ghost have gone from underground satanic rock act to one of the most popular metal bands of all time. But in heavy metal, especially of the theatrical variety, being able to market your identity is as important as releasing solid albums, and in that respect Tobias Forge is currently unmatched. This Halloween proves that even if Ghost were to break up tomorrow, their legacy would live on in the skull-painted faces of trick-or-treating fans everywhere.