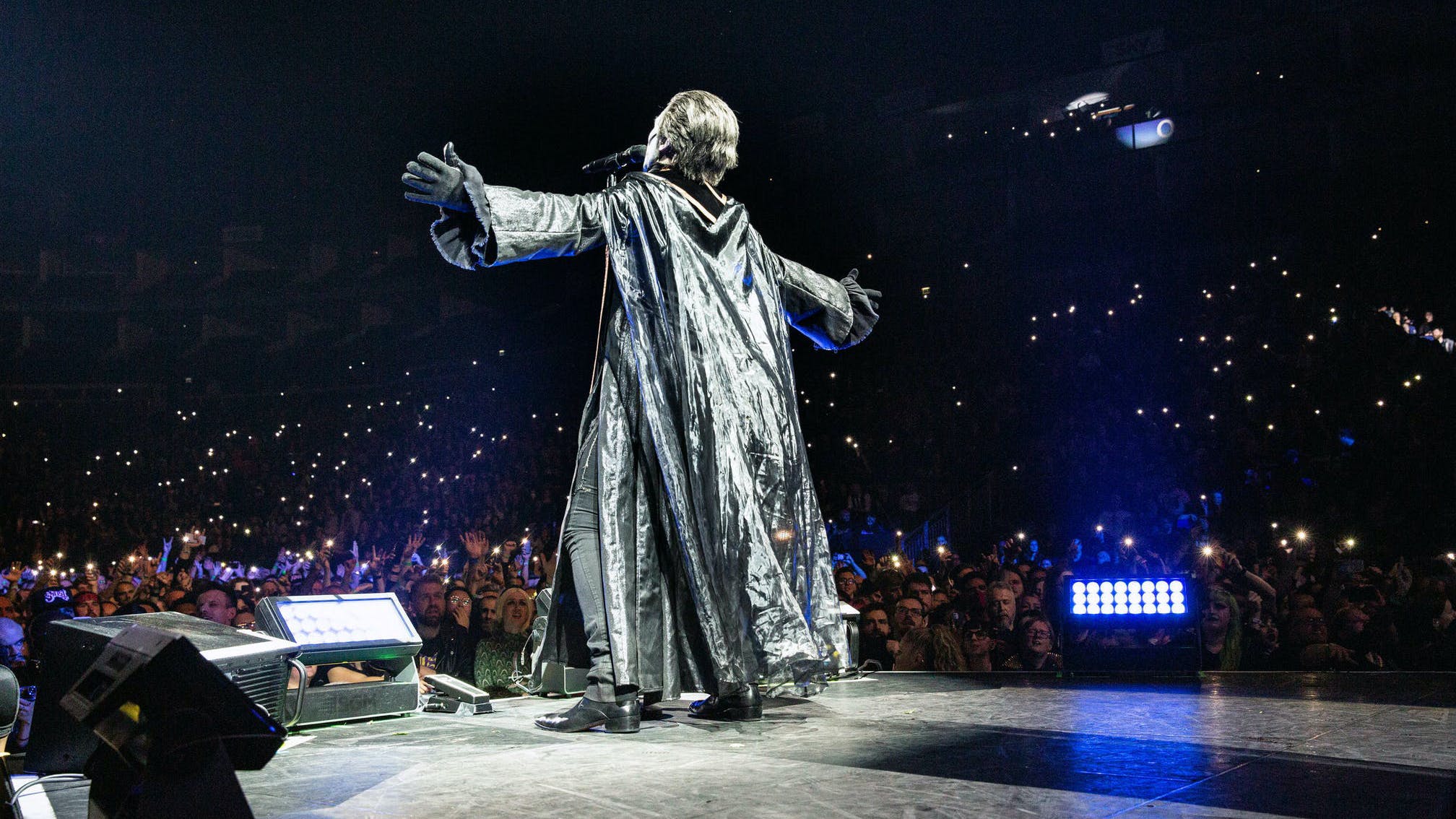 Tobias Forge is going around in circles. It’s 12:40pm in Milwaukee, where in roughly nine hours’ time, Ghost will play the Fiserv Forum, the 19th show on their mammoth 26-date U.S. tour of arenas and massive theatres with co-headliners Volbeat. In preparation for tonight’s exertions, he is walking the corridors around this arena for exercise, one of countless efficiencies that ensure this satanic circus operates smoothly.

The Swedish mastermind generally clocks up 10,000 steps before a show, and some 4,000 during the course of it. “And in-between I have to take care of my back and everything else in order to not collapse,” the 41-year-old admits. “I’m not 20 anymore. When I haven’t taken care of myself in the past, I’ve felt it; you don’t do a good show and that is unacceptable.”

And anyone looking for tales of hell-raising, Tobias suggests, will be sorely disappointed: tonight’s 15-song set features somewhere in the region of 700 cues – musical, visual and pyrotechnic – so everyone needs to have their wits about them.

“At the risk of destroying people’s hopes of this being a debaucherous tour, the only way for us to do this is by staying extremely clean.”

Readiness for the more physical aspects of this touring run – dubbed the Pre Imperatour given it’s before the release of Ghost’s fifth album, Impera – is just part of the prep. Tobias’ transformation from fitness-conscious Swede to demonic Pope takes somewhere in the region of an hour, involving not just the donning of robes and application of facial accoutrements, but a period of silence in which to get into the mindset of Papa Emeritus IV. And once this process is complete, the character, pitched somewhere between Mafia don and Hollywood legend Errol Flynn, cannot be broken.

Despite the world long since discovering who’s beneath those papal robes and snazzy blazers, Tobias still refers to Papa as an entirely different person – as “he” rather than “me”. Given the specificity of Papa’s voice, movements and topics of conversation, though, presumably it’s difficult to just go and grab a sandwich from the canteen…?

There’s a lengthy pause, as if Tobias is taken aback by the suggestion and is allowing us time to retract it. “But he wouldn’t go to the canteen for a sandwich,” he deadpans. “There are certain things [Papa] doesn’t do. He belongs onstage.”

That’s not entirely true, though. An hour-long meet and greet session precedes each show on these American dates, providing those willing to pay for the privilege with a photo op with the figure Tobias suggests “you would never, ever, ever bump into on the street”.

These have led to rather profound encounters, too, with attendees sharing heartbreaking accounts of personal tragedy and the pivotal role Ghost’s music has played in them enduring their hardships. These moments touch the heart of the man beneath that inscrutable mask.

“It makes you humble,” admits Tobias of the things he’s been told. “I think it’s a therapeutic ritual before the show, because you get to know your fans. It’s a really good feeling to be close to them and find out who they are and what they like. A lot of them are very similar to me in what they’re interested in.”

When Tobias suggests many members of Ghost’s congregation are like him, he means they’re introverted. As a seven-year-old growing up in the southern Swedish city of Linköping, he had friends but preferred his own company and staying at home to watch television, drawing and listening to music – usually all at the same time. Despite being what he calls an “indoorsy” person, when Tobias watched Let’s Spend The Night Together, The Rolling Stones’ concert film from 1983, he dreamt of being Mick Jagger and energetically recreated the frontman’s every hip swivel and gesticulation.

Playing, then, is a joyous act of fantasy fulfilment; Papa is not just part-gangster and part-swashbuckler, but part-child.

“In a way, a lot of these things I’m doing now are either things I pretended to do when I was a kid after I’d come home from school, or wished to do and made plans for in all those years I wasn’t even close to doing this professionally. It feels like I’m finally getting to do the things I’ve done in my head for as long as I can remember. When I’m onstage, I’m playing. I’m pretending to be someone else.”

Proper play requires the correct playset, of course. Unlike most kids who dance around their rooms imitating their musical heroes, Tobias paid equally close attention to the stages his heroes performed on. To him, The Rolling Stones’ Steel Wheels Tour, with its factory-like configuration, remains an all-time great feat of live production that he aspires to emulate once he has “all the ducks in a row”. He’s also fond of the Ancient Egyptian styling of Iron Maiden’s World Slavery Tour, and the stark statues of Metallica’s Damaged Justice trek.

“That’s how you do it,” he nods. “That’s how I like to see it. What we’re building towards will be a combination of [all] that, and even more theatrical, with more projections and film. But you can’t have it all. You can’t always get what you want – at least not at the moment you want it. But we’re working on it.”

In the days before this chat, headlines appeared online that confirm Tobias’ somewhat exacting and dictatorial nature. Perhaps that should be re-confirm, though. In Ghost’s Kerrang! interview from September 2019, Tobias discussed the uncompromising eye he kept on the logistics of tours and his constant need “to know who’s in the shit”. In his defence, however, he did also suggest his approach was a case of once bitten, twice shy.

“I’ve definitely [gotten] into trouble over the years by being too nice to people and giving them too much slack,” he said from a practice room in Seattle’s WAMU Theater, a rolling news channel in the background confirming he’s comforted by the presence of a TV as he was as a kid. “When you do that it’s like with dogs: if you don’t tell them what the rules are, they start making up their own. That sounds horrible, but there are 40 people on this tour, so there has to be a line and a curriculum. I’m adamant about getting my vision through – especially now we’re in this transitional phase between theatres and arenas.”

It’s safe to say that transition has since been completed. Tonight’s venue holds more than 17,000 people, with a staff of 80 operating diligently behind the scenes to help make the magic happen. Nevertheless, Tobias continues to develop his vision while running a very tight ship. And while we can’t comment on his ability to tear strips off under-performing crew members, Tobias does address Storm Eunice having torn strips off the canopy surrounding The O2 in London, where Ghost are due to play on April 11.

“We were still a while away and I hadn’t heard anything about it jeopardising what we’re doing there,” he says seriously, sidestepping K!’s overdone joke about tearing the roof off the capital’s enormodome, while admitting he never actually saw any images of the destruction. “Our people were looking into it.”

He thinks for a moment about other similarly-sized venues that could have provided a suitable replacement, had the situation not been resolved. “I’ll have taken Wembley [Arena] if it was available,” he casually jokes, about the place Ghost successfully headlined in November 2019, as if he’s a billionaire hoovering up properties. “I wouldn’t mind going back. It was a dream come true playing there.”

Tobias remains enthusiastic about the topic of Ghost’s rampant, and some might say unlikely, love affair with the UK. That’s natural given his status as a card-carrying Anglophile who grew up listening to Queen and watching Benny Hill (whose brand of smutty slapstick undoubtedly influenced the physical aspects of Papa’s between-song patter, allowing him to get laughs in countries where there’s a language barrier). Despite his love for all things English, Tobias recalls being told in no uncertain terms not to expect too much from audiences over here. “In the early days we were told it was an unbreakable market. And that when we played anywhere outside London, we shouldn’t be alarmed if someone chucks a beer bottle at us during the set.”

But that flying beer bottle never came. In fact, from their first UK show — only their second ever — at Live Evil 2010, a two-day festival curated by Darkthrone’s Fenriz, held at London’s Underworld alongside NWOBHM heroes Angel Witch and Vulcano, to their tour with Paradise Lost after the release of debut album Opus Eponymous in 2011, Ghost were taken into the bosom of us Brits.

“There has never been a moment – whether supporting [another band] or headlining – where I didn’t feel we had something special with a British crowd,” Tobias smiles. “I’m really happy that the clairvoyance of those who told us it wouldn’t work out turned out to be wrong. I’ve always felt we have a strong fanbase over there, but you never take it for granted. You have to do better every time you come and prove yourself, because that’s part of this job.”

Despite all the music talk, Tobias uses a sports analogy to describe his attitude to touring and its part in Ghost’s ongoing success. It doesn’t stop, you see.

“There are new matches to play,” he says with the level–headedness of a football manager doing a post-match interview. “And just because you won last year, doesn’t mean this new season doesn’t have to be fucking great.”

This article originally appeared in the March issue of Kerrang!.