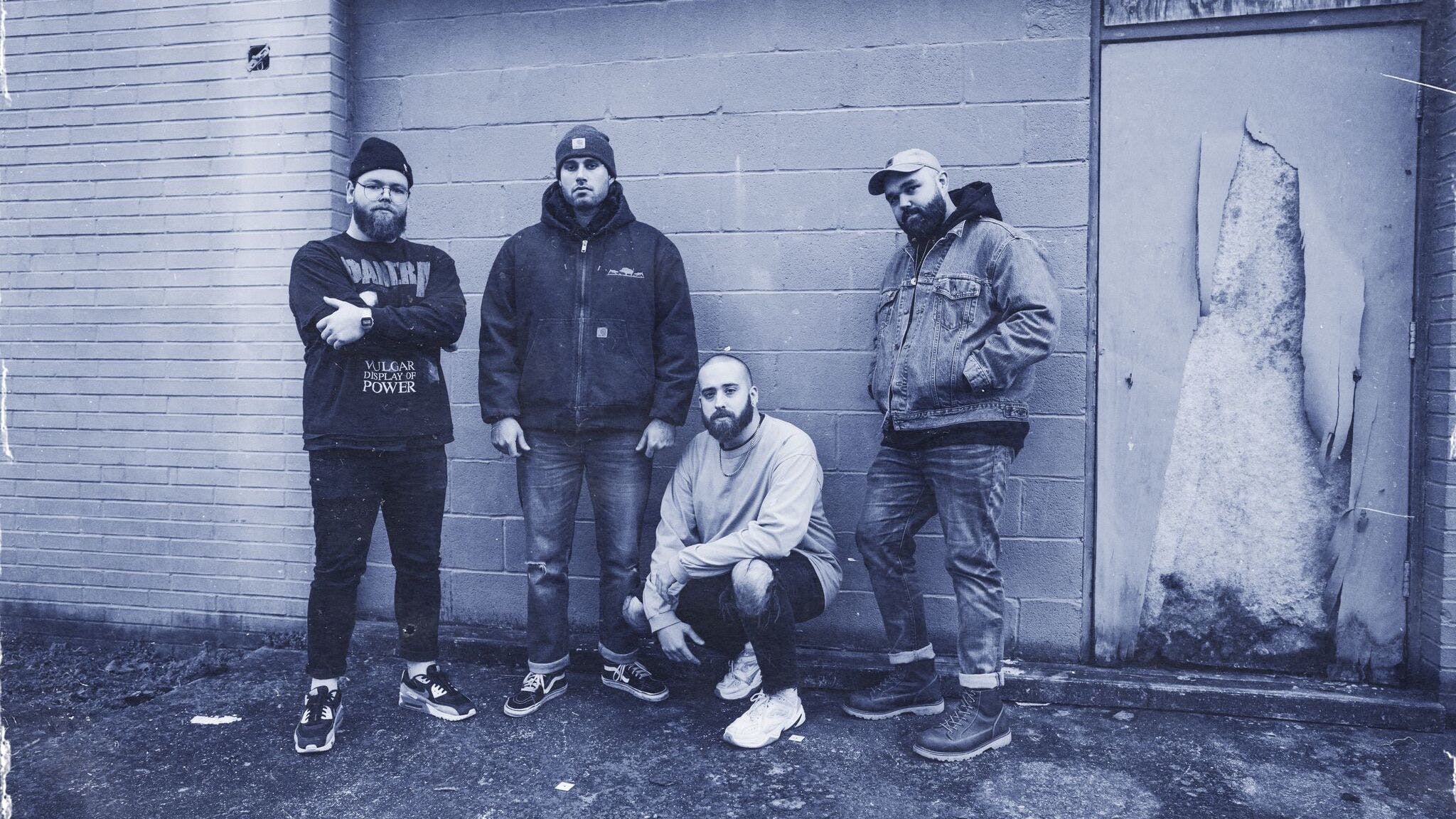 For many, losing faith in God is a harrowing experience. For Alabama metalcore quartet Gideon, the process was not only difficult -- but unspeakably liberating.

Raised as Southern Baptists, the members of Gideon were quickly shoehorned into the Christian hardcore scene shortly after forming. But over the years, the band began to notice the cracks in the logic of those around them, and eventually, they realized that so much of what they’d been taught -- and what they’d surrounded themselves with as a band -- didn’t align itself with what they truly believed.

“We’re just very open-minded and loved making friends with people,” says vocalist and guitarist Tyler Riley. “And we didn’t understand why -- if they believe something else -- they would go to a different place when they die. I think that’s what kind of opened the door for me: making all these friends that believe totally different things to me and having to ask myself…”

“‘What did they do to deserve this?’” asks drummer Jake Smelley.

“Yeah -- ‘What did they do to deserve Hell?’” says Tyler. “I think that’s what started it in me. And seeing a lot of corruption in the church when I would go back home.”

Though the process was at times heartbreaking, Gideon’s change of faith bore impressive fruit. The band’s upcoming new album, Out Of Control, is a hard-hitting reinvigoration of their sound, imbued with a layer of abandon and vehemence that will no doubt garner them a whole new fanbase. And though they may have lost some followers with the dismissal of their faith, the band’s new direction is such that those fair-weather fans who can’t see beyond their religious mores only toss fuel on Gideon’s fire.

“I think that’s where a lot of the aggression from this album,” says Jake. “Whether it be people commenting, our families at home, friends that have been there since we were kids. It’s one of those things where you feel like everyone’s watching you and judging you for how you’re acting in life. There’s a lot of aggression that needs to get out, and it came out perfectly in these songs.”

The central theme of the album is finding your own voice outside of the Christian metal and hardcore scene. How quickly and immediately did you find yourself entrenched in that scene, and how quickly did you guys begin to realize that maybe it wasn’t for you?

Jake: About six years ago. We all came from Southern Baptist backgrounds, and, personally, that was one of the only reasons my parents let me tour in high school. ‘Oh, he’s doing the Lord’s work,’ you know? We got out and starting touring with different types of people that just believed in different things.

Tyler: None of us even talked about it for a long time. We all just kind of were internally dealing with it, all separately, until it started leaking out in conversation and we’d be like, ‘You know, I don’t even know anymore.’ That was only right before the last album, and that was in 2014 or 2016, whenever we were making Cold. That’s about the time we finally started discussing it openly amongst ourselves.

Was there a specific moment when it officially came out, like, ‘I’m beginning to think this is wrong and we need to make a change?’ Or was it just a gradual process?

Jake: I think it was a slow gradual growth of us all finding ourselves. Then, once we all found that thing inside of us that started questioning how we were raised and how we were brought up in this little bubble, and start realizing, ‘Maybe this isn’t the only way.’ We came together as a group and we’d just talk about it randomly, just accidentally, because it was something on our minds.

Tyler: Also, not an easy thing to talk about to a fellow supposed Christian. It’s like losing your Christian faith. It’s not easy to bring up, not easy to admit even to yourself. That’s the biggest one.

Jake: There’s a lot of fear involved, and one of those fears involved is losing people you love that believe that way. It seems like a lot of times, whenever you come out and question things, a lot of people look down on you for just questioning. We just had each other’s backs in it through all.

Did anyone in the band react hostile to this idea? Was there anyone, either from a business perspective or from a Christian perspective, who was like, ‘This isn’t what I signed up for, this is career suicide?’

Jake: I think the biggest hill to climb was to get people who working with us -- certain people on our team. It was hard for them to see us not going in that direction anymore, and whenever we started coming up with these crazy songs that were just way different than our older ones lyrically, they tried to keep us in check: ‘I don’t know if this is the right move; I don’t know what you guys are thinking, but I don’t think this isn’t it.’ On our last record, we actually had to change some things because they were too explicit. For this record, we were just like, ‘Man, we’re tired of being in this fence, we’re tired of being in this cage,’ because this is what we’ve grown up with our whole lives. We just gotta be ourselves.

Did this change also manifest in your personal life, as well as your sound? Does it affect your relationship with your family and friends?

Tyler: Yeah, for some of us, definitely. It’s a very personal thing -- your faith and believing something like a higher power, but being from the south, Jake can speak on that more.

Jake: I’m still dealing with it. It’s one of those things where, once you make a jump like this, it’s hard to just turn back. You have to just give it everything you got because I know my family, I know Dan’s family, we grew up very conservative and grew up in old fire-and-brimstone churches when we were kids. When you have family that believes that if you don’t believe this way, you will burn in Hell forever -- your family is genuinely sad. They’re scared for you. It’s something I deal with every day. Sometimes that’s where the bitterness comes from. Sometimes it’s easier to be mad at something than to be sad about it.

Listening to the songs on Out Of Control, there is a acerbic, confrontational vibe from the get-go. Is there a specific track on the album that jumps out at you as a declaration of this change in your life?

Jake: I would say it’s definitely the song Sleep, the first song on the record. I don’t know about the rest of the guys, but I feel like that song represents standing up for yourself, not getting run over by other people that want you to live your life a certain way. It’s kind of like saying goodnight to those people who keep putting you down. That was a very out there song for us, and I’m so stoked on it. I love how we were just able to say what we’ve been feeling.

Earlier this year, you guys released the No Love/No One single with 2 Deep on it. Have you received a lot of blowback from fans on that one, or were people refreshingly open-minded?

Jake: Yeah, we’ve got a mixture. A lot of positive stuff, but there’s plenty of people who are confused or upset, or just completely furious.

Tyler: We had a guy come up to our merch table the other night and asked our vocalist, ‘Do you ever read your Bible anymore?’ Things like that. There’s definitely backlash, but I would say more positives than negatives. Before we put out Cold, we had already made the decision that we were gonna say whatever we wanted to say on stage, we were just gonna be ourselves at shows, hanging out with kids and whatever. It’s just been that for years now, us saying whatever we want.

We heard every story, like, ‘You guys, I’m not really a Christian anymore, but I almost feel like you guys grew up with me. It’s cool to be able to grow with you guys. That’s all a product of us actually being ourselves, and it seems like a way better connection with the people we meet and a way more honest interaction than a kid walking up and saying, ‘Hey, can I pray for you?’ or ‘Hey, will you pray for me?’ It’s all this weird Christian clout-grabbing -- it’s not very real.

What about Out Of Control are you most excited for fans to hear?

Jake: I’m ready for people to hear us with no hold-backs, no restraints, no fences. It’s us purely. The music on this record, we had a guy come in named Caleb and he came to the table with a lot of things that were just outside the box, and I can’t wait for people to hear it. It also pushed me lyrically. If the music’s gonna be super outside the box, I’m not holding back at all when it comes to what I want to talk about on these songs.

Gideon's Out Of Control will be released October 11th on Equal Vision Records, and is available for preorder.

Make sure to catch Gideon at one of the following live shows:

8 Albums In Which Bands Totally Changed Their Perspective

Here are eight albums on which bands announced a whole new outlook on music.

Why Gideon Are Proud To Be Southern, Even After Losing Their Faith

Though they've left their Southern Baptist traditions behind, Alabama's Gideon will always love the south.

Two new songs appear to be the prelude to a new full-length album coming later this year.