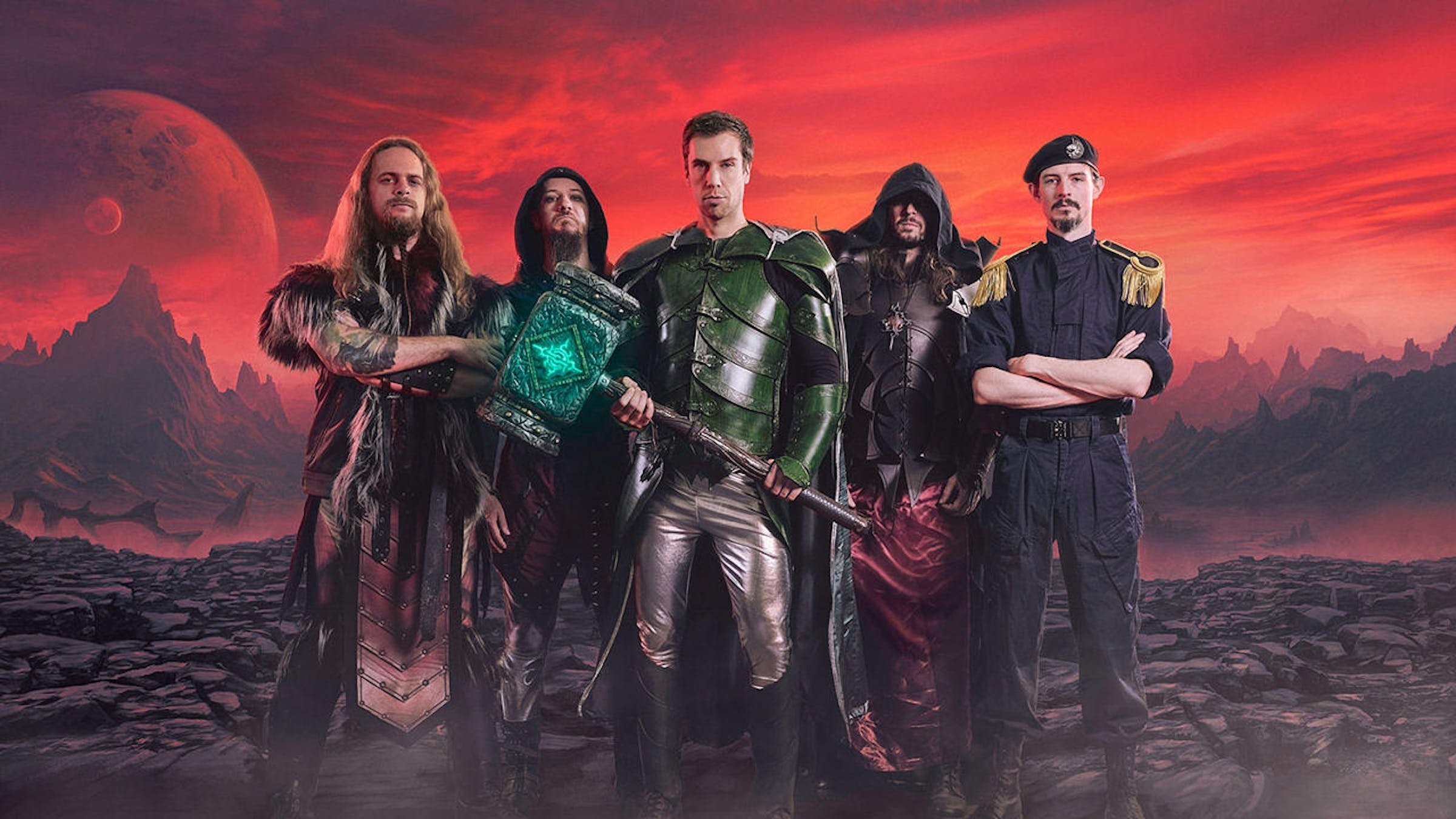 Despite what you may think seeing their album covers, song titles, music videos, and stage gear, Gloryhammer are no joke. Yes, the international power metal band write riotous songs about a space-bound fantasy saga that never happened. And yes, they perform in elaborate costumes that make them look like they flunked out of the Green Lantern Corps. But the band’s elaborate songs and image are entirely purposeful, and like any good piece of fantasy (or comedy), they’re born out of hard work and joy. Simply put, something as insane as Gloryhammer could never happen by accident.

“A lot of bands who do this sort of silly dress-up fantasy over-the-top thing, whether it’s fantasy or black metal or whatever, it’s almost like costumes and theatrics come first and there’s not actually songs behind it,” says Christopher Bowes. Most metal fans know Christopher as the frontman of high-flying pirate-metallers Alestorm, but Gloryhammer sees him stepping out of the spotlight and performing as songwriter and keyboardist. “We sort of feel like there’s bands in our world and our scene and all these stupid power-metal bands, and look at what they do. So many of them forget to write good songs all the way, and it’s only so far a silly costumes and a jetpack can take you if you don’t have the music to back it up.”

Above: Christopher Bowes, manifesting as Zargothrax.

The band’s new album, Legends From Beyond The Galactic Terrorvortex, continues the band’s epic saga for radness. Packed with songs about unicorns, jetpacks, and a track about the band’s titular weapon (it’s a hammer, for the record), this might be the album that elevates Gloryhammer to international superstardom...thought that may never cure Chris’ vague sheepishness.

"That’s my least favorite thing: when you go to the border control and they say, ‘Blah, blah, blah, what brings you to the country?’” he laughs. “And we say, ‘We’re here to play a show,’ and they say, ‘Oh you’re a band, what’s the name of your band?’ and we have to say, ‘Hi, we’re called Gloryhammer, we dress up as wizards and play power-metal,’ and you’ve got this border guard saying, ‘What? What the fuck is power-metal? You’re a wizard?’ It’s really embarrassing. I wish we could say something like, ‘Yeah, we’re Iron Maiden,’ or ‘We’re a cool band, we’re like Cooly McCoolface.’ Like, no, we’re Gloryhammer and we sing about wizards.”

Is the new album a distinct chapter in the Gloryhammer saga, or are they just different tales from

Christopher Bowes: Yeah, the whole thing is one big, massive story where everything runs back. It’s just a big, silly, fantasy pile of disasters, and it’s sort of a story that builds up over time. Originally, we thought it would be funny to make a power metal album...but it’s set in Scotland, because, you know, most of Scotland is a very boring place. So, we set it in all the pretty boring spots in Scotland, like Dundee and Fife. I’m sure you don’t know them, but they’re very bland parts — it’s like if you had a power metal album set in New Jersey, the least epic place you can imagine. And, then, it’s funny because all of these people come to our shows saying, ‘Yes, I love your songs about Dundee, is it a real place?’ You don’t want to go to the real place, mate, it’s a shithole. So, yeah, anyway, the stories kind of spiraled out of control and now it’s this weird nonsensical multiple dimensions with intergalactic wizard battles in space and things. It’s very jolly and every album is gonna always be part of the same thing. It’s gonna get bigger and stupider and more complicated.

Was there anything on the album that you were like, ‘We’re gonna open up this?’ Did you have a sit-down meeting and say, ‘This one’s going to be our unicorn song?’

Well, what we really want to do is, like, a traditional fantasy story where the hero has to go on a quest to fight the artifact, and if you fight the artifact you defeat the overall wizard. In this one he’s gonna fight a jetpack. We’ve got these grand plans of actually getting a rocket-powered jetpack for our singer to wear, and maybe some cable-mechanism hanging from the rafters onstage so he can actually go up to the sky with the jetpack spraying smoke into the audience, kind of what KISS does but even better. So that’s the grand masterplan onstage. We will have the silliest show of all time, that’s a guarantee.

Obviously, in heavy metal, that’s an ambitious goal: to out-silly the greatest.

[laughs] Yes! I saw KISS last summer, and Paul Stanley was playing but then he forgot the words to the song. I was like, ‘This has to be a joke or something.’ He was just staring into space the entire song and he let go of his guitar and was just standing around and all of a sudden his whole band was like, ‘What the hell,’ so they stopped playing and then they started again. It was weird, just seeing KISS fucking up. It was weird.

There’s something about you guys that somehow seems more serious than KISS, at least with you guys there’s a bit more mythology and intensity and going all out in it, as opposed to the vague, ‘I’m a demon and he’s a cat of some kind, sort of.’

Yeah, we’re actually going all in on the storyline. If someone wanted to write a book or a comic or make a movie, there’s definitely enough content in the whole thing to make a very fleshed-out Marvel cinematic universe, that would be fun, wouldn’t it? Imagine that happening next.

When you’ve got this sort of story and the saga involved, are there certain parts that you try to match up to the story? Like, is there a riff where you’re like, ‘This is the jetpack riff?’

Yeah, we have this sort of thing, where when we started out, it was just throwing songs together. Like, every character had their own sort of thing, it could be a riff or a little melody, an association with each character. So, on subsequent albums, whenever a character does something, we bring back that riff or weird counter melody. It’s mostly done through our drummer Ben [Turk], who’s like a magical music wizard. He does all this stuff through programming orchestras and conducting and all that crazy stuff, and he knows just how to make all of it happen. So, I write the songs, you know, the four-chords party power-metal songs, and he goes absolutely batshit crazy on it, doing all this mad stuff with orchestras, and he just transforms it into a ridiculous, over-the-top super-detailed [song]. It’s also a dream of ours to even perform these songs with an orchestra, because we can. The orchestral parts are real -- it’s not just like cheap synthesizer keyboards keyboards -- everything is designed to be played on a real instrument. So, there’s a potential for it to go crazy and I’m looking forward to see where it goes. It’s definitely a very grand, over-the-top sort of concept and whole thing really.

Obviously, you mentioned the jetpack -- is there anything else coming in your stage show that we should keep our eyes peeled for?

I mean, we’ve got new costumes for everyone right now. As budgets get bigger and our ideas get wilder, our costumes get a lot more grand. Looking back into our previous albums we’re like, ‘man, those costumes look lame.’ And now we’ve got this daft, over-the-top, really complicated armor. The thing is, we haven’t played live wearing these new costumes yet, so we might find out that it’s absolutely, utterly impractical and a complete nightmare, but we’ll see. Right now, it’s just about putting on a great rock and roll show, there’s a lot of sing-along bits, audience participation and so on. If, and, when, mostly IF, shows get bigger and bigger enough, we’ll have a ridiculous stage design with a castle and laser beams, but until then it’s just bare-bones rock'n'roll and five dudes wearing silly armor.

Have you ever had to scrap a costume or stage prop because it got too elaborate, expensive, or dangerous?

Our singer Tom, for our last album, got some guy in China to make him a suit of space armor, which basically looks like Iron Man’s costume. From a distance it looked incredible, and then he put it on and took it to the video shoot, and if you just touched it, it would dent. How do you possibly tour around the world, jumping on and off planes, vans, buses, in this thing where if you would just look at it, it would disintegrate? He wore it for the video and for the photoshoot, but he had to get rid of it. It had lights and it lit up, there was even a helmet that had eyes and glowed and stuff. It was just the most absolutely impractical pile of crap you could ever imagine. There’s all a limit to what we can do. We don’t really have the budget to have these giant wardrobe cases with all our armors pristinely wrapped inside it. There’s gotta be some sort of idea of being in budget. He was just so insistent that this piece of armor was the best thing, and as soon as we saw it, and we were immediately like, ‘No, no, that’s awful, that it away.’

Finally, you’re known for your other band, Alestorm, and I wanted to ask: though Gloryhammer may write about knights and aliens and wizards, I assume they will not write about pirates.

That’s one of the main things -- people have said, ‘When is Alestorm and Gloryhammer having a crossover?’ No, no, there’s a vast gulf of space between those two bands. I mean, we’ve toured together and we’ll probably tour together again, but I think it cheapens the whole thing. There will never be a song about pirates, not even a wink and the nudge to Alestorm. Just gonna keep the two things very separate. That’s a guarantee.

I honestly think that’s for the better just in terms of keeping everything special in what it is.

Yeah, it definitely cheapens the brand. We’ve had our record label be like, ‘Why don’t you do some sort of dungeons and dragons thing?’ or ‘Why don’t you do this thing that’s like The Avengers or Star Wars?’ No, that’s not us, we do our own thing, it’s its own universe, its own world, its own bubble. We’re not here to live on the back of something else. It’s gonna stand alone in its own merits.

Gloryhammer's Legends From Beyond The Galactic Terrorvortex comes out this Friday, May 31st, on Napalm Record. It's available for preorder.

The band heads out on tour this summer, so catch the glory and the hammer at one of the following dates: