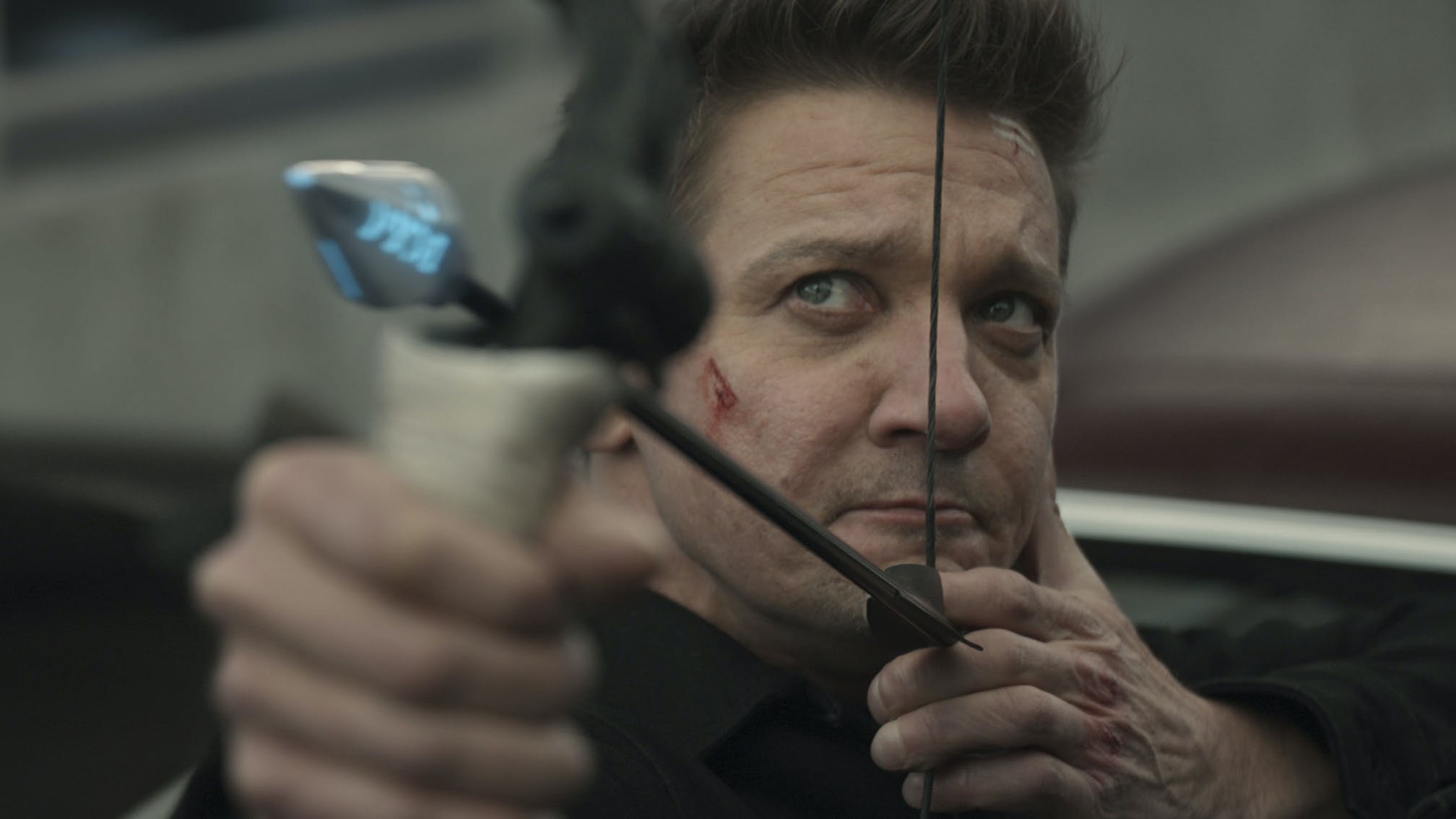 The change in pace from a big-ass event movie to a TV show can be a double-edged sword. On the one hand, you get a lot more time to build relationships and details of the world your story inhabits. But on the other, there can be a bit of wheel-spinning.

Episode four of Hawkeye contains a bit of both. After the most swiftly-dismissed cliffhanger ever (actually, thinking about it, Barton’s grappling hook is the real “Cliff hanger”, thanks, yes), it’s an episode in which plenty of things happen, but not that much happens.

The relationship between Clint Barton and Kate Bishop remains charming, her puppy-dog enthusiasm repeatedly colliding with his hangdog perma-reluctance. Their festive night in is a delight, complete with Christmas jumpers, an endearingly low-key training montage throwing coins in a hallway, the biggest laugh of the series so far (“You sure that’s dry-erase?”) and some oddly judgement-free revelations about Clint’s past. He is still haunted by guilt and trauma that can wrench the needle off the record in a heartbeat, bringing holiday cheer to a screeching halt.

(Importantly, we learn that The Santa Clause exists within the MCU. Unlike The Hunger Games revelation of episode two, this doesn’t immediately create baffling logic problems – it’s not like Tim Allen is one of the Guardians Of The Galaxy or anything. However, his Galaxy Quest co-stars Sigourney Weaver and Sam Rockwell were respectively in The Defenders – which may or may not be canon anymore, it’s hard to keep track of – and Iron Man 2. So, like, where does it end, man?)

Elsewhere, we learn Jack Duquesne (portrayed by Tony Dalton and possessing a real Paul F. Tompkins vibe) is dodgy but can dance, which we pretty much already knew. We learn Eleanor Bishop (Vera Farmiga) is surprisingly casual about a stray, mangy hound (Pizza Dog) lolloping all over her million-dollar furniture. We learn two things about the endlessly patient Laura Barton (Linda Cardellini): she has apparently never had a text exchange with her husband before, and she doesn’t know about capitalising brand names. Spelling Rolex with a lower-case r? Putting a small a on the Avengers? Good lord.

The LARPers (“They’re colourful!”) are back, which feels like the most “Oh god, six episodes is a lot to fill” material of the show so far. There was inevitably going to be a lull at some point, and this is by far the most wheel-spinny episode there has been.

After her terrific introduction last week, Maya (Alacqua Cox) is limited to one (admittedly good) fight scene, which also brings in a new face to the series, one that has had the element of surprise fairly comprehensively removed from it by the internet but that we won’t spoil here. It hopefully promises big things to come in terms of both drama and big ol’ fights.

However, the worry here is that nothing is really going to mean anything. Other than Jack’s dapper nefariousness, which is its own thing really, everyone fighting on that roof is kind of on the same team. Maya hates what Ronin did; so does Clint. The new person is mad Natasha died; so is Clint. It could all potentially be cleared up with some heartfelt conversations, firm embraces and sincere promises to keep in touch. It’s difficult to imagine any of the main characters failing to make it to the end of the series (if they harm a hair on Pizza Dog’s head there will be riots), which just makes it that bit harder to get too emotionally invested in the perceived jeopardy of any of it.

But a lot could still happen, and the Kate/Clint dynamic is so much fun that even in a relatively uneventful episode, there’s plenty to enjoy. Hopefully next week someone will incorporate the MCU version of a great Tim Vine joke:

PERSON A: “Where does Hawkeye keep his arrows?”