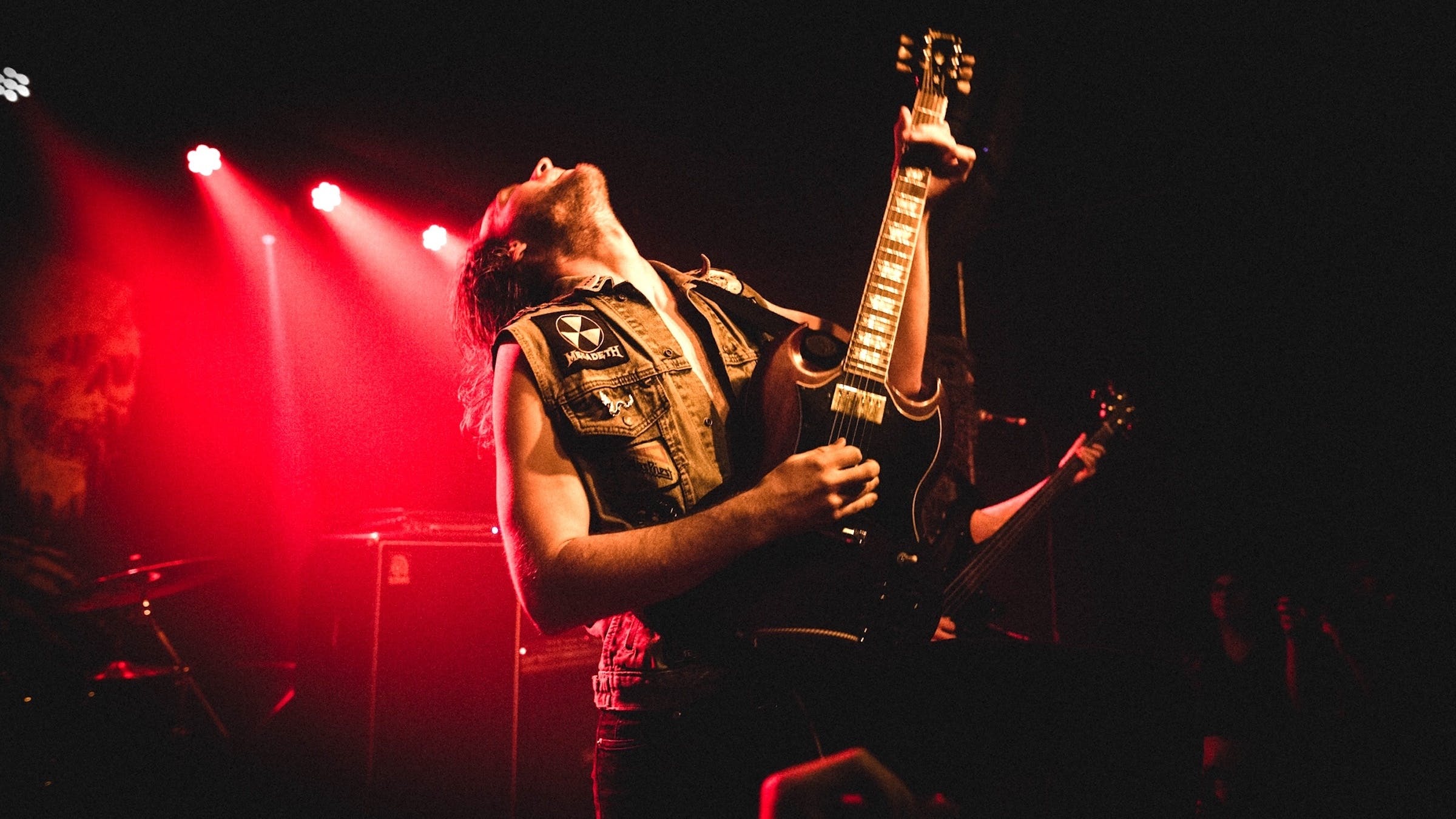 This Friday night, Brooklyn’s Saint Vitus is a weird mix of old-school and progressive. On the one hand, the crowd is a who’s-who of the city’s metal publicists, journalists, and musicians, talking theory and cracking wise about recent releases. At the same time, everyone’s getting wasted with great determination, and the glee and excitement for tonight’s bands feels in no way judgmental or ironic. No one crammed into the dark bar is here for Horrendous’ sold-out show with Tomb Mold and Daeva to see how they do tonight -- they’re just here to rage.

Horrendous walk this line perfectly. On paper, the Philadelphia quartet fall into the ‘progressive death metal’ slot, and their latest album, this year’s Idol, certainly has all the interesting technicality, unusual acrobatics, and audible bass that the genre is known for. But the band’s dedication to playing infectious, exciting music has made them a much-loved addition to the scene that both hesher intellectuals and no-nonsense lifers can get behind. Nowhere is this better illustrated than tonight, the second show in a string of record-release dates that have been selling out at an alarming rate.

“When you play NY, it feels like your shit’s on the line,” says Horrendous bassist Alex Kulick. “It’s a huge city, there are a million things going on every night -- I’ve seen some of the best shows I’ve ever seen in NY, and in a place like Vitus, where we have friends coming...if you bring the right energy, it’ll explode, but if you do it just slightly wrong, the judgment will fall on top of you.”

That’s the other thing about Horrendous: they’re wonderfully human. Listening to their albums, one hears music that, though ambitious and brilliant, could be made by four dudes who love death metal. And meeting the band, one encounters just that, even at their own sold-out New York gig.

“It’s surreal to sell out any venue,” says guitarist and vocalist Damian Herring. “I mean, we’ve played Vitus quite a few times. The first day of any tour has some anxiousness.”

“I’m a middle-school teacher, so I’m always in class when I get notifications like that,” says Matt Knox, also guitars and vocals. “I teach 7th Grade. I remember seeing it and just not believing it for a second.”

The band’s humility and humanity are even more endearing when placed next to their accomplishments. Their previous album, Anaretta, was voted 2015’s Album Of The Year by Decibel Magazine, and their latest, Idol, is equally impressive, expanding on Anaretta's sound while maintaining a base level of frantic, maniacal energy. That the album is both sonically impressive and a pleasure to listen to makes seeing Horrendous live an especially exciting treat.

“I think it comes down to the way we’ve progressed,” says Alex. “I don’t know if this is pulling the curtain back too much, but when I first joined the band [in 2016], there were songs from Anaretta that I thought, MAYBE, we could play live, because they’re so complex. They were our reach songs. And those songs are now a breeze. But while recording the new ones, we took our time, we had fun, Damian does all the recording so we could fuck around a bit...and I don’t think we thought too hard about what it would be like to play those songs live. And they’re extremely challenging, and now those are our reach songs. We’re growing with the music -- the music is pushing us along. Right now, for me, it’s The Idolator [off of Idol]. I mean, the bass is soloing the whole time”

“Yeah, but that’s your own fault,” says Damian.

Alex laughs. “You reap what you sow!”

When the night’s acts start, there’s no milling about, no let-me-hear-a-few-songs-maybe-I’ll-go-in -- everyone packs into the venue and gets headbanging. Philly blackened thrash crew Daeva are up first, beginning the evening with a storm of enthusiastic misanthropy. The band’s mixture of warlike guitars, pained screams, and percussive overkill give them a strong Teutonic Three vibe, and frontman Eddie Chainsaw is wily, unhinged, and entertaining as Hell to watch fly around the stage. The band crack the night open like a cold beer, and the crowd chugs them down accordingly.

Tomb Mold stand in stark contrast to Daeva -- where Daeva played fiery, wild thrash while bathed in hot red light, Tomb Mold grind out clammy weirdo death metal while illuminated a cold blue. But the band’s lush, old-school sound is a refreshing change, and the Brooklyn crowd goes nuts as the Canadian quartet blast out a set of creepy, overpowering OSDM. Tomb Mold’s jaunty vibe and oozing guitar sound bring a listenability to the music that will attract fans of classic death metal acts and newcomers like Gatecreeper and Outer Heaven; one wouldn’t be surprised to catch them headlining Vitus in the near future.

Horrendous’ set is, simply put, a blast. The band’s speedy, elaborate death metal is absolutely riveting when injected with the energy of a live show, and songs that might feel sprawling on headphones are absolutely electric tonight. The band themselves are mesmerizing to watch, shredding, vamping, screaming in the face of the crowd, and generally losing their minds playing a style of music more commonly attributed to staring down at one’s strings than headbanging with your tongue out while speeding through a solo. The audience loves it, and responds with moshing, crowdsurfing, and flicking their fingers in the air along with the band.

As the show lets out, there’s a vague sense of disbelief in the air -- everyone knew it would be good, but no one expected it to be that good. The band seem to feel the same way as they take a load off down in Vitus’ basement, their sweaty faces aglow with the satisfied smiles of those who know in no uncertain terms that they did their fucking jobs.

“I think that’s the whole point of playing live in the first place,” says Matt Knox. “That doesn’t happen to metal all the time -- a lot of times, people just stand there and watch a band play. I’ve never really felt comfortable in that setting. Tonight, with what happened, people crowd-surfing, getting up onstage...we’ve never had that before. I hope it goes on for the whole tour.”

Horrendous' Idol is out now on Season Of Mist. Buy it here.

The Philadelphia, PA, death metal act get better with every release – and their latest is no exception.