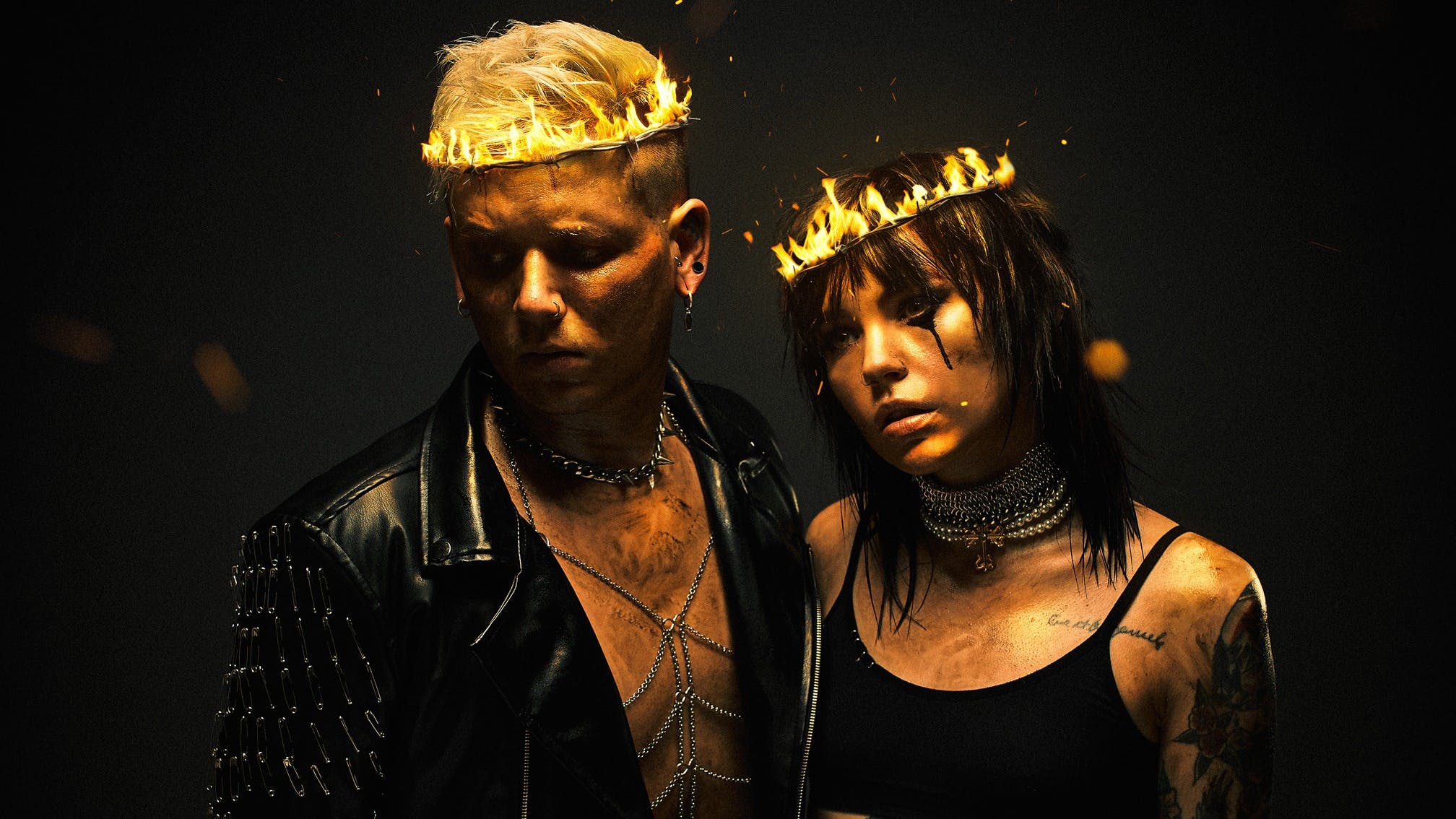 Over the past month, fast-rising Manchester stars Hot Milk have been using their social platforms to tease new music. And if you’ve seen them supporting Pale Waves recently, you would’ve noticed a new song or two littered into their setlist.

Now, the next chapter of the band is finally here, with the release of their catchy new single Bad Influence, a song vocalist / guitarist Han Mee reveals is close to home. The track will be lifted from their upcoming EP, The King And Queen Of Gasoline, which is due in August.

Here, we chat to Han and fellow vocalist / guitarist Jim Shaw about the new track, what we can expect from the EP as a whole, and how long it will be until we finally hear their debut full-length album…

Hello, Han and Jim! You’ve just dropped new single Bad Influence – does it feel like you’re back with a bang?
Han: “I think release day felt so far away but all of a sudden it’s here, so I don’t think we’ve really thought about it – it’s just like, ‘Oh shit, it’s here!’ But yeah, the song has got a big fat riff in it which, I guess, is new for us in a way. When we played it live on tour, it just went off – which I think is a good sign, right? All we ever want is for our songs to make people go, ‘Oh fuck, this song! Yeah, this fucking song…’ and so I think this one does bring us back with a bang.”
Jim: “Yeah, it’s definitely one of my favourite songs to play. I don’t even know if that’s because it’s new, or just because it’s a fun one to play. But we got big old circle-pits for it on tour with Pale Waves, which was pretty gnarly. So yeah, I think if you want to quantify it that way, then we are back with a bang!”

Is it a good indication of where we can expect Hot Milk to go next?
Jim: “For us, Bad Influence was kind of sonically and musically very similar to [2019 single Candy Coated Lie$]. We wanted to write something that was just fun and catchy, and we looked at Candy… like, ‘Okay, how do we write another song like this?’”
Han: “We’ve definitely taken big, straight rock approach to a lot of the middle-eights on this record, which I think you can particularly hear in this song and it’s not like anything we’ve done before.”
Jim: “When Hannah and I sat down to write this record, we really wanted something that was going to transfer live, so we’ve written the whole EP with live in mind, asking: ‘How is this going to come across?’ This one is just straight-up something you can bounce your fucking head to.”
Han: “It’s a punch in the face from the get-go, which is Hot Milk – and me as a person, as well.”

How does your new EP, The King And Queen Of Gasoline, feel as a whole compared to your previous releases?
Han: “I think it sounds more mature, honestly, and I think it’s bigger. It’s more anthemic and written with arenas in mind, which is where we want to be.”
Jim: “I feel like we’re kind of settling into understanding who we are as a band, and what we sound like. So I feel like this EP is a little bit more polished in the sense that we really understand what we want to write now. It feels a little bit more kind of together, if that makes sense.”

What was influencing you during the writing process?
Han: “I do feel like this EP is very My Chem and Green Day, actually. I am the biggest Green Day fan in the world, so it was going to bleed through at some point, wasn’t it? It is very, very, very 21st century, but it has nods to everything that we’ve ever listened to. I think we take parts of the past and then put it into a package for the future.
“And in terms of natural themes and the songs themselves, I think they’re incredibly honest. I think you can feel that on Bad Influence because I constantly get called a bad influence because I go out all the time. Even when I was a kid and stuff it was like, ‘Don’t hang out with Hannah because she sets fire to everything.’ There’s that whole theme in the EP. There’s a song called Teenage Runaway and that’s about the fact that me and James always felt like we’ve been running since we were teenagers doing the thing we want to do. And despite the fact our parents had never really agreed with it, you know? I think they all represent a frame to how we’re feeling right now.”

The EP isn’t out yet, but have you started thinking further ahead and put the feelers out for your debut album?
Han: “The word ‘album’ is banned right now, because we do so much in this band – we do everything. We do the live stuff, we run our own socials… everything we do is from us.”
Jim: “Yeah, from sorting the visas, to building the gear. And the label are like, ‘What do you think about the album? We need it ready now.’”
Han: “It will happen, but me and Jim work better when we go, ‘This needs to be done.’ I like the idea of starting afresh, from beginning to end. I like fate taking its course sometimes; put me in a room and let’s see what happens. I don’t want to stress about it too much, as that’s when you start mucking up.”
Jim: “We’ve put so much energy into this latest release that it’s almost our test pilot album. We’re using this to be like, ‘How do you write a record that flows?’ Rather than just a bunch of songs that belong to a piece of plastic. This EP is going to show us how we can write an album.”

Hot Milk have announced their biggest headline shows to date

Hot Milk announce headline gigs in London and Manchester, entitled England’s Screaming, encouraging fans to “come together and defend individuality more than ever”.