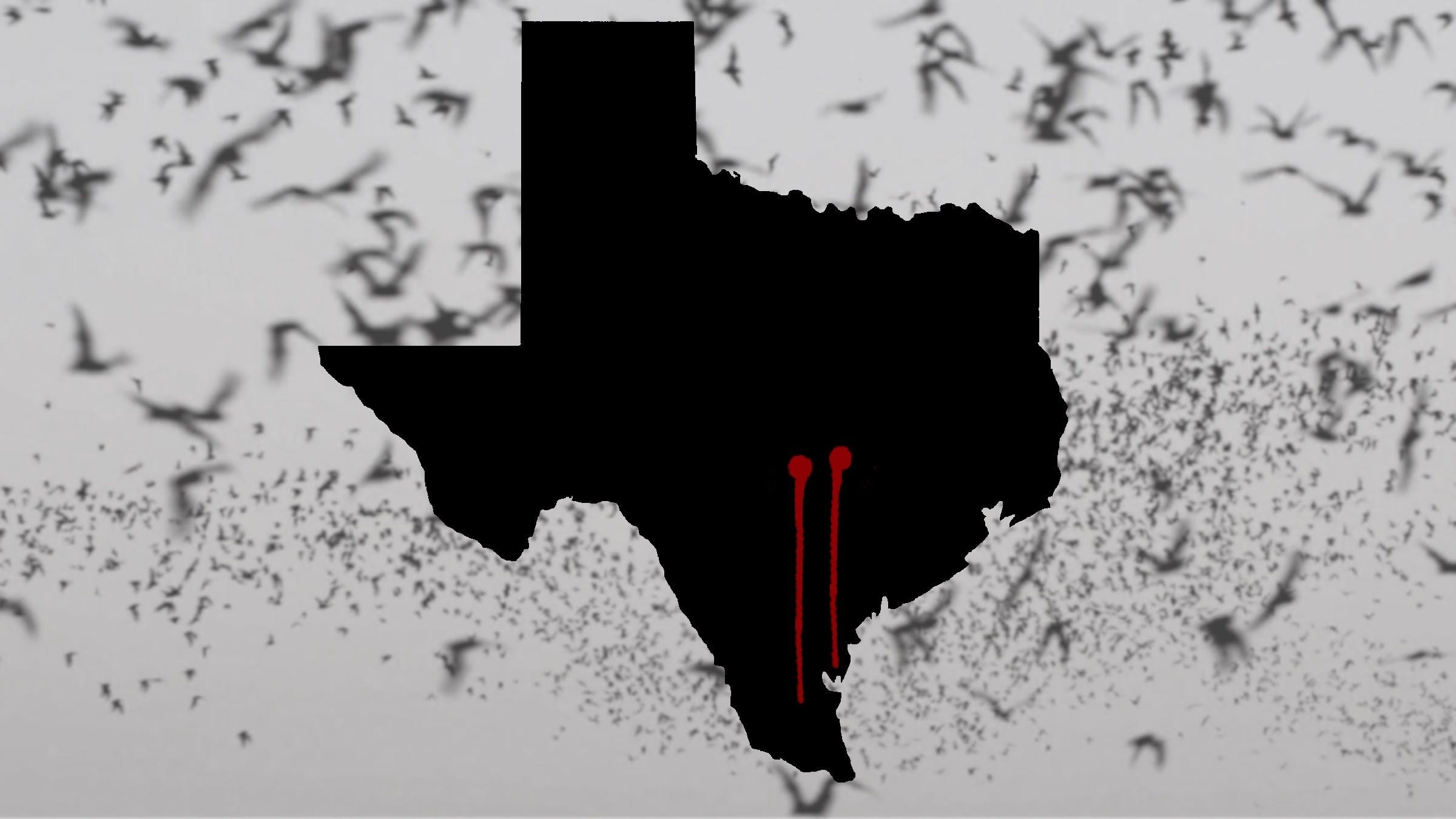 One doesn’t usually think of Austin, Texas as a haven for goths. As a rule, America’s creatures of the night are more often associated with New Orleans thanks to Anne Rice, while Texas remains a state synonymous with cowboys and big riffs; even Austin’s music scene is generally thought of as indie rock-centric due to the massive popularity of SXSW. Meanwhile, someone cloaked in black during one of Texas’s infamously uncomfortable summers is somewhat painful to consider. Overall, the Lone Star State seems better left to Pantera than, say, Cradle Of Filth.

But in recent years, shops and festivals have popped up across Austin that have celebrated all things that creep and crawl in the night. All this, plus the city's infamous animal residents, have made Austin a place where goth and vampire culture is more than welcome – and where fans of all things shadowy can finally belong.

For those in the know, the nighttime world has always been part of Austin’s image. While some cities attract outsiders with festivals and annual parties, one of the city’s biggest seasonal tourist industries comes from something that your average vacationer might not expect: bats. Go to the Congress Avenue Bridge at dusk and you’ll be able to see hundreds of thousands of Mexican free-tailed bats flying out from their homes beneath the bridge.

“In about 1980, the Texas Department of Transportation remodeled the bridge to accommodate heavier traffic; in doing that, they put in box beam construction, and some of the box beams were accidentally placed between a half-inch and inch-and-a-half apart, creating spaces that could be occupied by bats,” explains Merlin Tuttle, one of the world’s most renowned ecologists and bat conservationists. An Austin resident, Dr. Tuttle explains that like goths, bats are often mislabeled as dangerous for the sake of sensational headlines, and Austin’s biggest attraction wasn’t always appreciated for its beauty.

“[The Congress Avenue bats] initially created great alarm – the local health officials stated that they were rabid and dangerous, would attack people, and news headlines from coast to coast reported that hundreds of thousands of bats were attacking and invading the citizens of Austin,” he says. “I came to Austin and met with city fathers and leading citizens, and pointed out that the bats could be a real value, in that they didn’t pose a significant threat to humans… Looking back decades later, that has borne out very well. In the several decades of living in our bridge, the bats have not attacked a single human. They have not transmitted a disease to a single human. And they bring in more than $10 million tourist dollars each summer and consume 10 tons of insect pest each summer night.”

READ THIS: We did the math and worked out which animal is the most metal

In many ways, Austin’s adoption of its flying nocturnal residents has extended its acceptance of its shadowier subcultures. While Texas may not be commonly seen as a goth hotbed, Austin acts as an oasis in the state, its liberal and artsy residents bringing in more and more outcasts who see it as a town that accepts the strange and unusual. At the same time, the specifics of the Lone Star State – its aggressively rural attitude and its often punishing weather – mean that goths and vampire-worshippers have to form their own unique identities, while the places that cater to them have their specific needs in mind.

“Since the weather is warm most of the year, we have to carry more warm weather clothing, and fewer upscale goth dresses, for instance,” says Cassandra Davis, who founded Secret Oktober in 2004. The longest-running of Austin’s counterculture boutiques, Secret Oktober has become a local fixture, giving fans of the dark a place to congregate and brush leather-covered elbows. “We sometimes feel like we are the hub of the subculture. We have always been good at introducing people and letting customers know what is going on around town.”

“Austin has always had a goth community, since the beginning of the subculture, and has consistently had a goth club,” says Cassandra, pointing to venues like Elysium as the city’s perpetual outlets for dark nightlife. “But, in the past decade, the vampire and horror scenes have definitely grown. Almost every post-punk band who has toured the U.S. in the past few years has played in Austin. That scene has probably grown the most, and it is a big part of the traditional goth scene.”

“It’s the city of bats, so it made sense for me on that side,” notes Mitch Rafter, organizer of Austin’s annual Nosferatu Festival. As the editor of Gore Noir magazine, Mitch has become a figure in the cult horror world; with his new festival – complete with film screenings, themed activities, and performance artists – he’s celebrating the starker side of the horror coin. “Vampires are pretty much in every culture. And it’s one of those monsters you can empathize with. People actually want to be vampires, to live like vampires. It’s kind of a mystique there; Belga Lugosi’s Dracula is kind of a dapper dude. It’s all that mixed together, and the power that they have. I wanted to do a Nosferatu festival because when Nosferatu was first screened, they had a Festival of Nosferatu, where everybody dressed up. That’s kind of what I wanted to do.

“There’s a lot people trying to build the scene as far as events, and are available for people in the horror genre in general,” Mitch continues. "Since I’ve been here, [the goth scene] has kind of waxed and waned, but overall over the last four or five years, it’s been pushing up. People are realizing that they can be part of this, and know where to get clothing and meet people who’re similar-minded. For vampires, you’ve obviously got the Glass Coffin."

The Glass Coffin might be the most exciting recent addition to Austin’s goth and vampire scenes. A 'vampire parlour' that sells everything from funerary signs to satanic votive candles, the Coffin offers all the household wares and accessories that any self-respecting revenant needs. More importantly, the store’s decor goes all-in with its lavish and sepulchral decor, making it not just a place to buy cool stuff but a must-visit destination that people want to feature in their Instagram feed.

“I have to say that my passion for interior design and the dark, vampiric atmosphere I created intrigued people,” says Joey Slayne, who started the Glass Coffin as an online shop before expanding it into its physical location.

“Austin goth and horror culture has definitely grown within the last two years,” he says. “After opening the Glass Coffin, I think I paved way for other ‘dark’ themed shops. There is also a really amazing company that just started about two years ago called HorrorWeb… living in the Bat City and opening a vampire-themed shop was just the perfect pairing. People come from all over the world to visit The Glass Coffin. It’s on people’s bucket lists and also a must go-to when visiting Austin. People love vampires and I’m just so happy that I was able to turn my passion and love of vampires into a living. It’s incredible.“

“Austin is the city of the weird and as such tends to be extremely supportive of different subcultures,” explains Daley South, who founded The Vampire Court of Austin with her partner Logan. “The strange and unusual is commonly celebrated. The vampire subculture is surprisingly alive in Austin. We founded the Vampire Court of Austin in 2012, now run by our close friends and long-time members Nathanial and Leila. We also host the Austin Vampire Ball, Vampire Carnival, and Vampire Salon every year, and even host a vampire float in the Gay Pride Parade every year.”

Something Daley mentions is a commonly-accepted local fact: Austin doesn’t represent Texas as a whole. The city is most certainly Austin’s most liberal, and as such the weirdness appreciated therein hasn’t always been appreciated elsewhere. But as Austin’s dark subcultures become more of its identity, the state around them has begun to treat them with greater tolerance – similar to how Austinites love the bats they once fear.

“Fear of bats comes from simply not understanding them,” says Merlin Tuttle. “In parts of the world like the Pacific Islands where bats have six-foot wingspans and are right out where people can see them, people don’t fear them. In fact, they eulogize them as folk heroes. They’re feared only to the extent that people don’t understand them, and it’s easy to misunderstand the bat because they’re active at night, they fly unpredictably… We should be looking at what would be looking at the world if we lost our bats, instead of what would happen if bats live too near us.”

“It’s kind of an island,” admits Nosferatu Festival's Mitch Rafter with a chuckle. “Once you get out of the bigger cities, it’s less open to that mentality. But no one I’ve come in contact with has been straight up angry about it. They just see you in all black, and they’re like, 'So… you from Austin?'"

Merlin Tuttle's Bat Conservation is open for membership and donations. More can be learned about Congress Avenue's bat population at their website AustinBats.org, or by reading MTBC's piece on the essential nature of bats.

Those looking for goth and vampire wares can visit Secret Oktober and The Glass Coffin online.