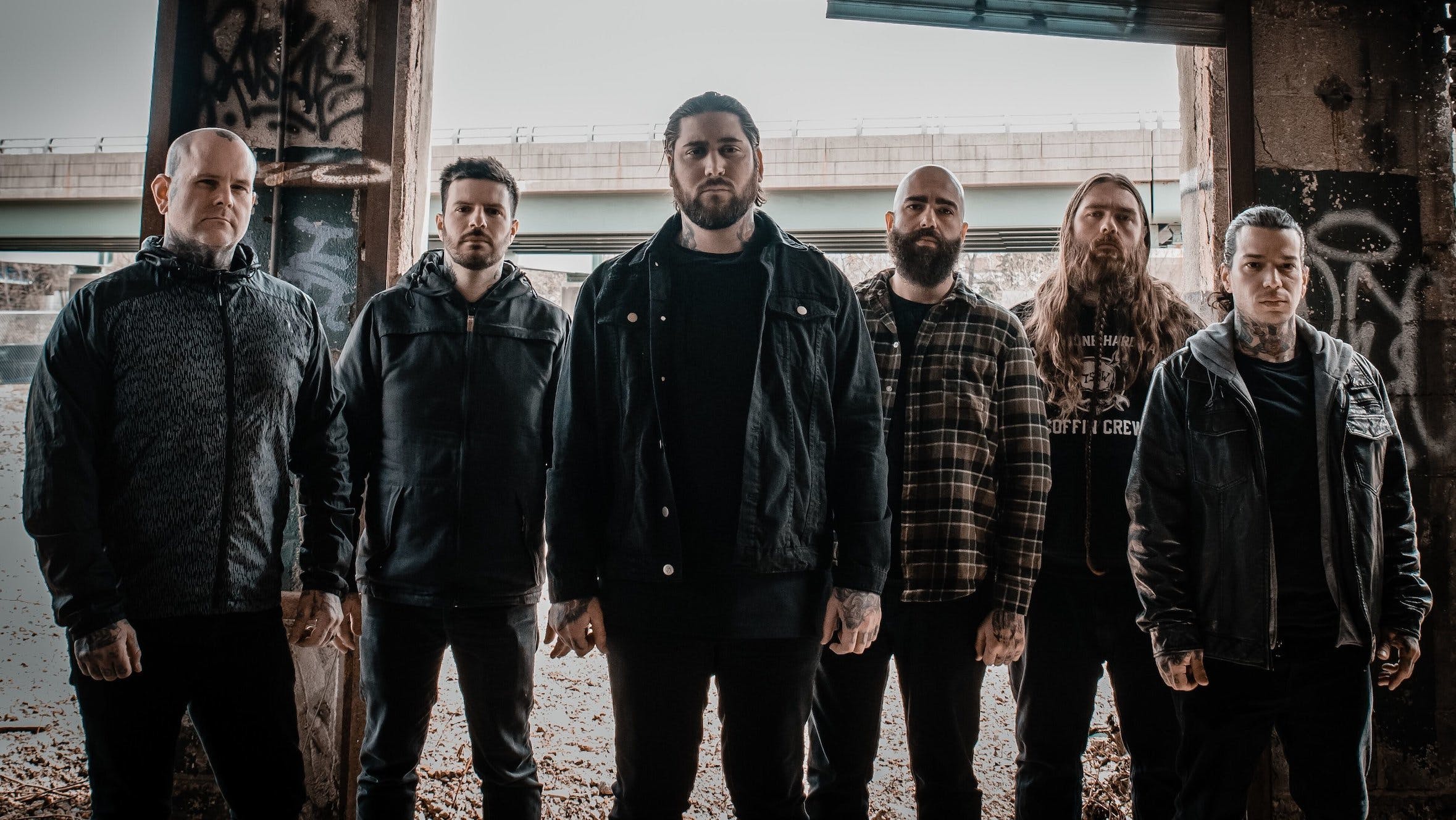 It’s important that Fit For An Autopsy maintain a tight ship. Since they first emerged in the early 2010s, the Jersey City, New Jersey-based band, led by guitarist and renowned producer Will Putney, set themselves apart from the deathcore scene at large with both their technical prowess and their deliberate emotional resonance. This wasn’t a band reveling in aimless breakdowns and grueling gorefests -- there was a point to this band, a sense of direction in both their lyrics and music. But the band also saw its fair share of line-up changes and stylistic refinement, making Fit For An Autopsy feel at times like a project rather than a band proper -- a predicament which, if you ask them, has finally been remedied.

“I think we’ve definitely found our place, each individual member,” says guitarist Pat Sheridan, “and found our way to not only musically push the band forward, but push it forward business-wise, push it forward in our lives. We’ve grown together as a band in the past few years as people, and with all the tour experience. On every level, we’ve moved forward. We’ve learned a lot, and we know what our common goal is, as people.”

That unity is present in spades on The Sea Of Tragic Beasts, Fit For An Autopsy’s upcoming new studio album. The band’s winning combination of death metal and hardcore sounds tighter than ever, but this time around there's also the effortless incorporation of aspects from both genres’ niche traditions. Flashes of melodeath, crossover thrash, and groove metal appear at a moment’s notice, widening the band’s emotional and stylistic scope; vocalist Joe Badolato sounds believably furious throughout, whether he’s growling, shrieking, or taking part in scream-along gang vocals.

That the album is Fit For An Autopsy’s debut on Nuclear Blast speaks well for their future with the label; it’s hard to imagine listening to Tragic Beasts and not being anything other than ecstatic. Ask Will Putney, though, and it’s not the new label that drove the band to come together and raise the bar -- the only standards Fit For An Autopsy were forced to meet were their own.

“I don’t think there was pressure, especially compared to some of the other stuff," says Will. "If anything, this was probably the least stressful recording experience we’ve had as a band. We felt more confident with what we wanted to do, which was make the best record we can."

Going into The Sea Of Tragic Beasts, was there anything you set out to specifically try -- or, conversely, that you specifically didn’t want to do?

Will Putney, guitarist and songwriter: I think going into this one, we were just much more confident about going in and writing the songs that we wanted to. We started doing that significantly on [2017’s The Great Collapse], and luckily, people are into what we do, so we went into this one with a little more confidence. It worked out for the best, rather than being stuck playing a specific style or being boxed in.

READ THIS: Exclusive: Fit For An Autopsy's Will Putney on their new album

Were there previous pressures that you felt weren't an issue this time around?

Pat Sheridan, guitarist and backing vocalist: Will is the main writer for the band -- he’s got the concept of what we should sound like, it’s his main project -- but the truth is, we write what we want to write, Will writes what he wants to write, and we don’t necessarily worry about what people are going to say. We want to sound like Fit For An Autopsy, but we’re not afraid to expand or bring in new styles rather than be stagnant and try to recreate what we’ve already done. It’s always about trying to do more than the last release, in our own eyes.

With this album, was there anything that went easier or smoother than it has on previous records?

Joe Badolato, vocalist: I don’t think anything really got easier. If anything, these songs were a little challenging, but I feel like they challenged us to grow as musicians. I think for myself, vocally, this record was very challenging, but we came together as a group. That’s the best part of growing with each record -- making these cooler sounds as a group, together. It's been such an emotional punch to the face.

Given that you guys move between so many genres, is it tough to lock down that Fit For An Autopsy sound?

PS: I think the reason we’re able to incorporate so many genres is that, as Will likes to say, we have such a diverse palette and such a range for music. We all come from such different and similar backgrounds. Our drummer is from Puerto Rico, and he grew up in the Caribbean and loves music with a lot of groove, but he also grew up in the hardcore scene. We’re always able to turn to each other for new and interesting things.

Tim Howley, guitarist: Obviously all of us have different influences that people wouldn’t think we have as a metal band. But as a band, we listen to such a wide variety of music. All of us listen to metal, but when we’re on tour, that’s the LAST thing we’re listening to. So when it comes to trying to reach people outside of our box, it allows people to hear little bits of our influences -- a little bit of a blues influence, a little bit of a classic rock influence.

What’s an influence that most Fit For An Autopsy listeners might not know factors importantly into your music?

Josean Orta, drummer: I’m super influenced by Caribbean music -- I listen to a lot of Afro-Cuban music, and it’s very heavy. It’s all drum-centered, so I just need to try and adapt it to what we do. Not a lot of people are aware of it, but lately I’ve been talking more about it to make some people more aware of it, and give people different influences. Good music is good music.

WP: For the record, the guy answering that question is wearing a tie-dyed Phil Collins shirt.

PS: My favorite band of all time is Steely Dan!

JB: I listen to a lot of pop stuff -- anything catchy that makes me bounce of groove, because we do a lot of that in Fit For An Autopsy. I find everything that’s groovy, back to the disco ‘70s, I’m all over the place.

PS: You say that now until Joe’s blasting Pvris at three o’clock in the morning!

The title and cover of the new album are really powerful -- is there a running concept or theme behind the whole thing?

WP: The title track was track one from the record, and I liked how it summed up the theme of the album -- this idea of how people have to be aggressive and standoffish just to get through the world, and reflecting back on that, how that was kind of tragic. Throughout the record, we confront a lot of topics that are under that umbrella, so we decided to make it the title.

That’s not something people usually associate with deathcore -- that kind of lament, or pity, rather of just anger.

WP: Yeah, there’s two sides of it -- you can yell at stuff and be angry at things you don’t like, but there should be another side to it, with how it affects people as individuals. And if you only talk about one side of that, you’re not telling the full story of the human condition. I feel like going a little deeper with something like that adds a little more seriousness to some of the topics than if you just yell for 45 minutes.

READ THIS: Study finds that death metal inspires joy rather than violence

Joe, do you have a specific way of getting that emotion across with your vocals?

JB: For me, each scream is trying to paint an emotional picture. I want to drive a little bit of how the emotion feels with these dark minor chords. It creates an angry vibe, a sad vibe, a feeling of confusion.

PS: One thing I actually talked to Joe about was how the things around him affect him as much as any of the lyrics to these songs. Joe’s a sponge, and you can really hear that in his vocals. As a band, everything we do is affected by what happens around us in the day to day. Listening to his vocals on this record, you can hear he’s put a lot of that emotion into his performance. Live, standing next to him onstage, I’ll hear him and think, ‘Damn, he’s really pissed today!’

What about the album are you excited to have people hear? What are you stoked to get out there?

TH: The fact that we’ve been sitting on this record for a long time -- we had song starts, what, a year ago? Possibly longer -- the songs have been written and recorded since late last year. So having it due out in less than a month, it’s a culmination of the last year and a half, and that weight is finally lifted from our shoulders.

Is that difficult, having to sit on songs for so long after they’re done?

PS: This thing happens when you go on the road and take a new record on tour. You play these new songs, and you find out which ones work live...and then you hate them, because you play them over and over and over. So we’re super stoked to get this record out, finally, but see me in six months and I might say something different!

Fit For An Autopsy's The Sea Of Tragic Beasts comes out October 25 on Nuclear Blast, and is available for preorder.

Make sure to catch the band on their upcoming tour at one of the following dates: