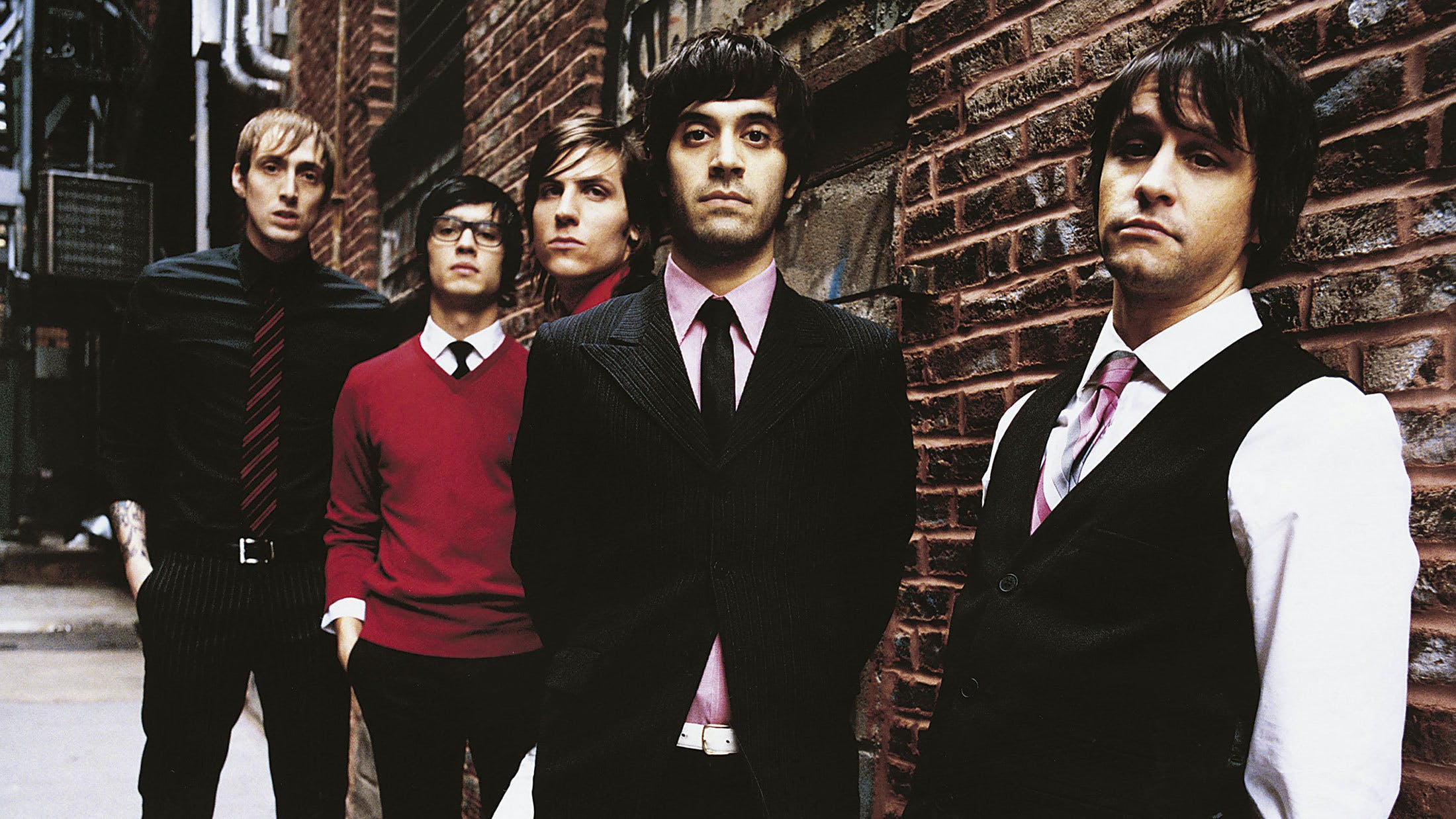 15 years ago, Daryl Palumbo had already made quite a name for himself in post-hardcore circles with Glassjaw – his project with guitarist Justin Beck. They’d released two albums, Everything You Ever Wanted to Know About Silence and Worship And Tribute in 2000 and 2002 respectively, and were known for mastering a unique, heavy sound that quickly garnered them a cult following.

People began to believe they knew what to expect from Daryl Palumbo. They were wrong.

In August of 2004, in what became an extended break between Glassjaw albums, Daryl teamed up with hip-hop producer Dan 'The Automator' Nakamura to release Decadence as Head Automatica. Decadence was impossible to pin down: mixing dance music, garage and post-punk in 11 ostensibly poppy but still rock-tinged tracks, it came somewhat out of left-field for the fans who took Glassjaw, and Daryl with it, pretty seriously.

“There’s always been this group of [fans] that still associate us with Coal Chamber and Roadrunner metal bands, and bands with green dreads,” Daryl tells us today. “I imagine that hearing the singing or big breaks or dance music or Depeche Mode-sounding far out shit is jarring.”

To give the fans some credit, Decadence was not only unlike anything Daryl had ever released, but also unlike anything in the alternative scene at the time. Combining synth-heavy dance tracks with smooth vocals, Decadence takes influence from Britpop, disco and everything in between.

But while it felt entirely new, Daryl refuses to take all the credit: “It wasn’t like I was coming up with any melding of styles. I was trying to emulate a lot of the bands that I was really digging on a daily basis,” he says, citing Big Audio Dynamite, The Clash, and Primal Scream as influences. “This stuff was really impactful to me. Embracing dance music, playing pop music, playing post-punk… juicing it up with production and electronics and shit.”

Despite being such an integral part of Long Island’s music history, a lot of the influence behind Decadence comes from the other side of the Atlantic. Onstage, Head Automatica’s style combined pinstripe suits with campy dance moves that brought to mind Jarvis Cocker. “Pulp was a very dear band to us. Disco 2000 – it’s big dance music,” he says.

Head Automatica allowed Daryl to explore that obsession with Britpop, citing Blur as another strong influence. “It was like a phenomenal crossing of these different pop styles. It was so nuanced,” he says.

That ‘90s dance influence is particularly evident on tracks like Disco Hades II and King Caesar. “You guys have festival rave, big breaks, big beats. We were listening to nonstop British music at that point. British rock music and British club music is my favourite sort of shit.”

Some artists don’t like to look back, but Daryl is enthusiastic and good-natured, skipping between topics and discussing different genres in expert detail without pause. It’s this approach that makes his music unique, too. All of Decadence’s tracks are distinct from each other, but they all have traces of what feel like Daryl trademarks if you’re listening hard enough: from the fast, powerful opener At The Speed Of A Yellow Bullet all the way through to the similarly heavy closer I Shot William H. Macy.

The Razor, and even more notably Please Please Please (Young Hollywood) have the sexy, gritty, vengeful quality of earlier Glassjaw – although perhaps less cruel. Either way, the record makes perfect sense as a passion project for a man who just adores music and can’t sit still.

While Glassjaw is a little heavier than Head Automatica, they’re two sides of the same coin; Daryl expressing himself and his appreciation of different genres. Sure, there’s less screaming in Head Automatica, but there’s the same frantic, attention deficit, experimental energy that defines Glassjaw, too.

“As somebody who was a part of the creation of all of it, I feel that it’s just a matter of music and melody. There are a lot of guitars, there’s a lot of distortion on them. It’s not that far away,” he says.

People struggled to define Head Automatica, which led to them being lumped in with the artists they toured with, like The Used and Taking Back Sunday. Anyone indefinable but vaguely alternative in 2004 was labelled as emo, no matter how little sense it made. “I was pretty disconnected with all that so touring with those bands was far out. We were very different than that type of music,” says Daryl. That misunderstanding, though, has followed him his entire career: “As soon as bigger labels entered my life with Justin and with Glassjaw, nothing made sense ever again. Glassjaw was always getting branded as something that it wasn’t – we weren’t emo or screamo or heavy metal, we weren’t really any of those things.”

But in 2004, genre was far more defined than it is now, which led to Decadence not only being lumped in with emo on tours, but across the music press. People needed to label it as something, and nothing else fit.

“Now, every wall is broken down, every genre at a point where it’s almost unrecognisable anymore,” says Daryl.

But perhaps it was Decadence’s own bold playfulness of genre that inspired bands to break down boundaries in alternative music? After Decadence’s release, artists like Fall Out Boy and their protégés played with dance, rock and pop in a way that didn’t sound like Head Automatica, but may have been made possible by it.

“This whole thing was happening and new technology allowed you to play a myriad of sounds, styles and genres, and execute things that you would otherwise never be able to,” he says, noting that shift in culture, but modestly refusing to acknowledge any part he played in it.

But despite Beating Heart Baby being played at every emo night since 2004, he’s right – Head Automatica never fit into anything they were prescribed. And for Daryl, the project was an antidote to that heavy music – pure escapism in the way that only pop music can be.

“I was so immersed, so drowned in heavy music every second of my life. Up until getting to do Head Automatica and taking a minute to tour and make those records and put together different bands to do it, it was never-ending,” he says.

“Glassjaw entered my life the summer before high school. Glassjaw was always there and I lived heavy music and there was just so much of it and it’s still there. It’s a part of me, this intensely heavy, bizarre music.

“There was so much of that so it was an escape for me, too. I wasn’t trying to escape – well, maybe I was a little bit.”

Head Automatica’s first two records were well-received, but the project did initially receive backlash from the more self-serious Glassjaw fans. For Daryl, who has always loved dance music, the foray was natural: “There was a lot more mystique for Justin and I at the time, and nothing was really known about us. I think people were super-hyped and passionate and connected with it. It was really foreign for me to just be playing music that was just every minute of my life. It didn’t feel weird to me, it felt completely normal, but obviously for people who connected with Glassjaw really passionately, some of them were really taken back and frustrated.”

After Decadence, Head Automatica would release another album, the perfectly named Popaganda in 2006. Then there was largely silence, until Daryl confirmed in 2009 that they were entering the mixing phase of an album entitled Swan Damage. In 2012, he announced that the masters had been shelved amid legal trouble, and after performing a final string of shows, Head Automatica appeared to be no more.

“It’s been done for a little while. I mean, I don’t mean done as in I’ll never do it again. I don’t mean that at all. I’m open to potentially doing it,” he says. “When I’m doing music other than Glassjaw or producing, the music is far more evolved. A down-the-road version of what Head Automatica was. It would be hard to go back and play a lot of that stuff.”

He still seems regretful that Swan Damage never made its way into the world: “I do wish that there was a better vehicle for having gotten out the third full-length that I put together at that time. There’s a lot of things I got out of that experience of that third record.”

Regardless, he’s emphatic about the record that could have been.

“There were some really cool songs and I think on the whole it was way closer to a lot of things that were going on on the first Head Automatica record, but way evolved. I think the production was fucking great. A lot of the songs were really edgy; good old pop-sounding shit and some really amazing, funky synths. Some really good electro on it. I wish it had gone to plan.

…Leaving disappointed Head Automatica fans with just the tiniest bit of hope that they might someday hear Swan Damage. But even if we don’t, we still have Decadence, and all of the other bands it undoubtedly inspired – although Daryl would never admit it.

Daryl Palumbo On The Status Of Head Automatica: “I Haven’t Really Talked To Those Guys In A Minute”

Head Automatica's Daryl Palumbo reflects on the end of the band, and their final, unreleased album Swan Damage.