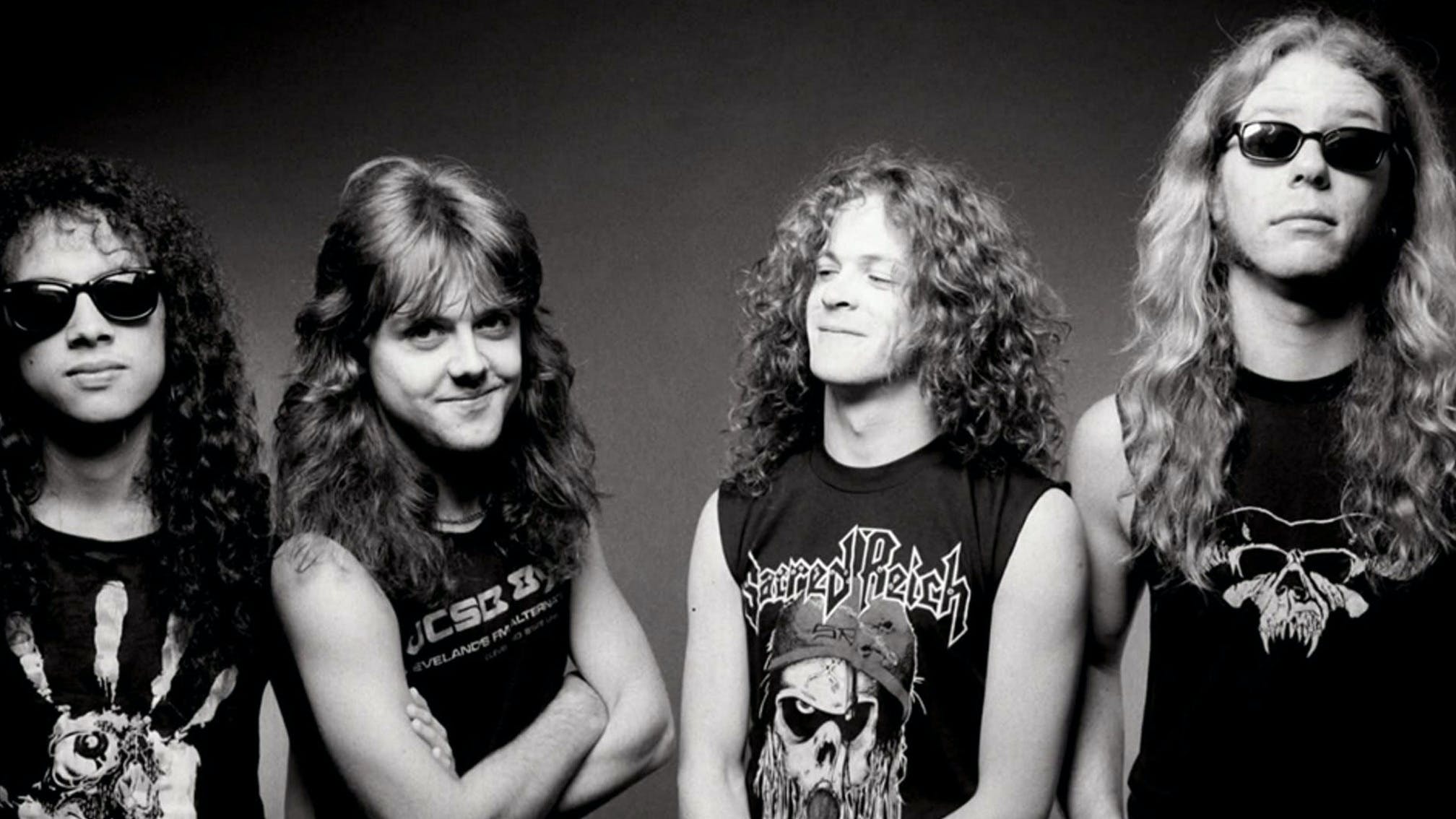 On January 17, 2001, Jason Newsted looked like the maddest man on Earth. After almost 15 years as bassist in what would become the biggest metal band in history, ‘Newkid’ suddenly, and very unexpectedly, announced that he was out. Gone. Walking off.

At the time, a statement from Jason listed his departure was down to “private and personal reasons and the physical damage I have done to myself over the years while playing the music that I love”. Some of these would later turn out to be, in part, a difference of opinion on whether the bassist should be allowed to do his side-project, Echobrain. Though small fry next to the day job, and despite the band’s management being on board with the idea during downtime, James Hetfield nevertheless said in an interview with Playboy, “When someone does a side-project, it takes away from the strength of Metallica.” Jason would counter this by saying it was somehow fine for Papa Het to do stuff like contribute to the soundtrack for South Park: Bigger, Longer And Uncut.

Still… Still… You’d have to be mad, right? At the time, Metallica’s status as The Kings was firmly carved in stone, and in no danger of being taken off them anytime soon. Parts of their '90s output like Load and Reload had wrinkled the noses of some fans, but other ideas like S&M were unanimously hailed as a consummate triumph of artistic vision that underlined their peerlessness. The battle with Napster wasn’t the best look, but it didn’t stop stadia filling themselves. Even Jason knew quite how this must have looked to millions of people all thinking the same thing: What the fuck would you do that for?

“I know, it seems crazy, doesn’t it?” he said to this writer in 2012. “I know it’s hard for people to understand, walking away from the money and all that. But money ain’t everything, man, and I earned plenty with Metallica! I haven’t had to worry about that part of things, I’ve always just been able to do whatever I want, when I want, travel with my wife where I want, whenever I want.

“People get freaked out, like, ‘Why would you leave this great thing, the biggest band alive?’” he continued. “That’s not really the deal. It’s not about ‘the biggest band’ stuff. I mean, I’m proud that I helped to get them to where they are, and that they continue working, and that they’ve worked so hard to be where they are, yeah that’s great. But that was just that chunk of my life. I was not going to let it swallow up my entire existence.”

Jason’s entry into Metallica was an opportunity born from the saddest of circumstances. On the night of September 27, 1986, the band were driving from Stockholm, Sweden to Copenhagen, Denmark, for the next show on the Damage Inc. tour in support of Master Of Puppets. Conditions in the bus were not ideal, and the band would draw cards over sleeping quarters. That night, bassist Cliff Burton won, and took Kirk Hammett’s bunk up front. When the bus crashed in the early hours of the morning, he was thrown from the bunk and killed when the bus then fell on him. He was just 24.

On November 8, a mere six weeks after the tragedy, Metallica played their first show with their new bassist, a small gig at Reseda Country Club in California. Plucked from U.S. thrashers Flotsam And Jetsam, Jason was a formidable musician, disciplined and direct, perfect to underpin the band’s increasingly technical music. His attitude, meanwhile, fit Metallica’s forward-looking outlook, as well as having an understanding of what was important in heaviness.

Rather than taking any real time off to grieve or process what had happened to their friend, with their new bassist – the ‘Newkid’ tag would last long past the point where Jason was, actually, an old kid – they continued apace. Finishing the Damage Inc tour, the band eased in the new recruit on record with the $5.98 EP, featuring covers of the likes of Diamond Head, Blitzkrieg and Killing Joke. And when Jason was introduced to UK audiences at Monsters Of Rock at Donington in 1987, it was as a member of a band who were simply devastating.

If a pecking order position was established, then it was in the final mix of 1988’s …And Justice For All. An astounding work in which the band took a truly labyrinthine approach to songwriting, seeming as if no part was played quite the same twice, it was nonetheless notable for a dry, taut production that to most ears featured no bass at all.

"After Lars and James heard their initial mixes the first thing they said was, 'Take the bass down so you can just hear it, and then once you've done that take it down a further three dBs,'” claimed producer Fleming Rasmussen later. “I have no idea why they wanted that, but it was totally out of my hands."

James Hetfield says the basslines competed weirdly in the mix with his rhythm guitar parts. It’s also been put down to knackered hearing after years on the road affecting the mixing process. But for whatever reason, it meant that for Jason, "The Justice album wasn't something that really felt good for me.”

Although he would always be Newkid, Jason was very much a part of Metallica, and part of the foursome that would soon become the biggest metal band on the planet. Onstage, his hulking presence and beefy sounds matched and complimented Papa Het perfectly, his extra aggression bolstering the band’s muscular charisma as they filled bigger and bigger venues, his extra vocals also adding an extra heft. Indeed, when James was injured on the 2000 Summer Sanitarium Tour, it was Jason who picked up most of the not inconsiderable load to cover singing duties.

Away from the stage, his role in the band became that of a level-headed workman, something of a stabilising force between the fire-and-ice personalities of alphas James and Lars. With a personal position that he was there to play music, and with not a lot of time for drama, his view that heading toward the stage or the studio was the most important bit of being in a band was a reminder of why they were there in the first place, describing how he felt about his role in 2012 as that of “a diplomat” (something which he added stretched to doing things like meet and greets more often than his bandmates). However, he also proudly added that, post-’Tallica, “It’s always like a cheerleader role that I take now.

“People try to talk smack about Metallica, I slap them right back down,” he said. "Don’t you dare. If you ever get together a band that can ever be bigger than that and play that kind of heavy music let me know, but until then shut the fuck up.”

Indeed, it’s hard to overstate just what the Jason-era of Metallica achieved. To see them not just explode in the ’90s, but keep expanding and step up to join the true legends of American music, while also playing thrash metal from the Bay Area to 80,000 people a night, was an upward trajectory that simply hasn’t been repeated. Put simply, Metallica got so big that there was no way of changing it back.

It was herein that the problem lay. Being part of something that goes up and then doesn’t come back down will do things to a person. As the band took time off in the second half of 2000 to have a breather and get their heads together before starting work on what would eventually become St Anger, as captured in the unbelievably frank Some Kind Of Monster documentary, it was suggested that some outside help come in to help them retune and get their heads round a decade in the rarefied air of superstardom. Jason’s response, as seen in said documentary, points to Metallica’s victories, and makes his feelings clear: “That’s so fucking lame.”

This, and the Echobrain thing, and not wanting to take time off, led to a re-evaluation of where he was, what he’d achieved, how it had taken its toll physically (“I’ve had three major shoulder surgeries, two on my right and one on my left,” he revealed later. “On my right arm I completely separated my bicep. At one time it was basically floating in my elbow and it had to be reconnected all the way up. I’m talking about years of therapy, man, years…”), and ultimately, that he was done. As the world accused him of being an idiot, Jason walked away.

Adjustment to civvy street after 14 years in a band where every minute of the day is on a schedule, where wants and needs are taken care of for you, where responsibility for the little things and a lot of the big ones are someone else’s, isn’t actually that easy. “Certainly, the first couple of years after leaving were really hard. Oh yes, they were very hard,” he said later. “Dude, it’s still weird now! You get institutionalised! The fantasy land that you live in for that long, when you’ve got how many other people on each tour, how many people taking care of every damn thing. You know, it kind of breeds irresponsibility and all that stuff, so it can be good and bad. And adjusting back to real life… I have to adjust to it every day.”

Perhaps, though, the departure of Jason actually helped Metallica in the long run. Just as Bruce Dickinson leaving Iron Maiden in 1993 led to a cooling off period after an insane decade of conquering the world in the ’80s, which ultimately resulted in Maiden becoming bigger than ever, maybe it was this that rocked the Metalli-boat so hard that they realised how important it was to right it. To this day, neither side have any regrets, with Jason having joined his old mates onstage for their 30th anniversary celebrations. Metallica, meanwhile, are bigger than ever. Jason did his own thing with his own band Newsted, filled Robert Trujillo’s spot in Ozzy’s band for a bit, got into art. And for him, something of a rolling stone, things coming and going, beginning and ending, are just a part of life.

“I left home pretty early, started Flotsam And Jetsam, I sort of did my own thing, my own decisions and my own way for my quest,” he told K! in 2012. “I was in Metallica. We kicked ass for 15 years, all around the world. But then it was just… time to leave.”