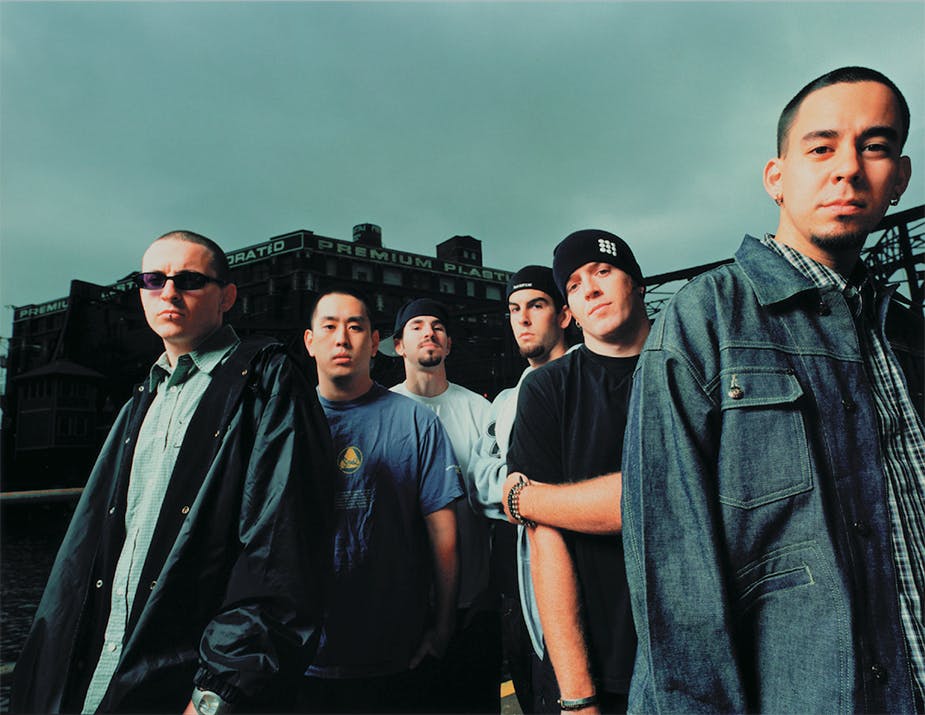 Like a lot of people of a certain age, Kerrang! writer James Hickie grew up with the music of Linkin Park. From furtive listening sessions in classrooms to life-affirming festival performances, his is an experience many can relate to. The difference is he got to thread in some professional encounters alongside those personal memories. This is his story…

When I think of Linkin Park, I automatically associate them with politics. Not because the nu-metal legends are the most polemical band in the world. In fact, as noted by Kerrang! scribe Ian Winwood in his review of it, they didn’t make what you’d call a political record until their fourth, A Thousand Suns, released in 2010. My first encounter with Linkin Park’s music came 10 years earlier, and the politics to which I’m referring was the subject of my A-level class, which served another, more clandestine, purpose.

You see I was less concerned about learning what a three-line whip was – something I’m not sure I really know to this day – and more so about discussing the music I was discovering. As politics was generally my first of the day, any music I heard on my way to school – be it Limp Bizkit, who were on the verge of releasing Chocolate Starfish And The Hot Dog Flavored Water, which would sell more than 1 million copies in a week, or Muse, or wherever – would become a talking point in class, whether anyone else wanted to hear about them or not.

One day, while making the not inconsiderable journey to school, I heard a song on my little portable radio that caught me by surprise. It had all the trappings of a metal song, with downtuned riffs and rasping vocals. It was also immaculately produced and fiendishly catchy in the way that all the best pop songs can be. It sounded like it was going to be the biggest thing in the world. The radio presenter said it was called One Step Closer.

Given that we were still a year away from the release of the iPod, and even more so from streaming services (legal ones, anyway), I didn’t have instant access to the song, so had to wait to hear it again. And wait. And wait. So long did I wait, in fact, that I decided to continue doing so during politics. And so, earphone covertly threaded down my sleeve, I sat there with my hand to my ear, a picture of faux concentration, listening with my free ear to the ever-patient Miss Carpenter and nodding in all the right places as spoke about the importance of referendums. Then that riff started again. I whelped with excitement. I had the song back, but then quickly lost it when Miss Carpenter’s finally patience ran out and she confiscated my radio.

Oh well; my tenure in A-level politics didn’t last the year, and I soon switched over to another course. My love of Linkin Park, however, continues to this day. Who needs to know about referendums, anyway? Ahem…

Fast forward to February of last year and much had happened to Linkin Park, and me, in the intervening 17 years. They released their debut album, Hybrid Theory, which featured 11 other songs just as brilliant as One Step Closer, and it has sold a staggering 30 million copies as a result. They followed it up with Meteora, surely the perfect justification of the maxim, ‘If it ain’t broke don’t fix it’, which has sold 27 million copies. Subsequent releases found the band increasingly inching away from the nu-metal sound that had made them megastars, a bold move that you couldn’t help but respect, and yet it still paid off for them. Third album Minutes To Midnight yielded the single What I’ve Done, for example, arguably co-vocalist Chester Bennington’s finest moment on record, and their most commercially successful song. No, it’s not all about sales, but if you’re a devotee of rock and metal, you can’t help but feel an intense swell of pride when one of our own dominates the charts and makes it big on the world stage (Nickelback notwithstanding); lest we forget, one of Linkin Park’s less lauded achievements is the gateway their music provided to countless people becoming K!-carrying music fans.

The aforementioned A Thousand Suns and its follow-up Living Things, both of which were co-produced by bearded maestro Rick Rubin, found the band splicing the genres together like never before; sixth album The Hunting Party saw a marked return to those heavier early days. And then came something completely different. I, meanwhile, had turned my passion into my job by writing for K!. Having been doing my dream gig for 11 years, I got the opportunity to come full circle by interviewing Linkin Park for a cover feature. I spoke to the band after they’d completed a live Facebook video stream from Los Angeles, where they’d debuted several songs from then-forthcoming album One More Light – inarguably the most controversial release of their career, given its drastic departure into exclusively poppy terrain.

“We’re not trying to pick fights with fans of our heavier music,” explained Mike Shinoda, whose smooth style provided a foil for Chester’s often-forceful bloodletting, of the furore. “Just like everybody, we’ve got different moods.” Chester, meanwhile, spoke of his own, reiterating the struggles he’d always been transparent about.

“I never feel comfortable or satisfied,” came his reply when I put lead single Heavy’s lyrical question (‘Why is everything so heavy?’) to him. “What makes things really heavy for me are my thoughts and behaviours where I’d get caught in these cycles of negativity or substance abuse.

“There’s a really bad neighbourhood inside my skull,” he continued, “so I shouldn’t really walk those streets by myself.” They’re words that soon came to mind on the afternoon just five months later, when the news broke that Chester had taken his own life, aged 41.

I spoke to the duo once more before Chester’s passing, in May of 2017, when I put some reader’s questions to them. It was a reminder of just how admirable Linkin Park’s relationship with their fans has always been. No matter how big the band became, they’ve never lost sight of, or appreciation for, the people that had helped to get them to get to where they are, and as a result greeted the assignment with warmth and graciousness, complimenting the questions and providing comprehensive answers.

There will never be a satisfactory answer to why Chester chose to do what he did, nor one that will lessen the pain that his millions of fans across the world continue to feel. The question of what will become of Linkin Park, however, remains one that only his surviving bandmates – Mike, guitarist Brad Delson, bassist Dave “Phoenix” Farrell, drummer Rob Bourdon and DJ Joe Hahn – can answer.

I last saw Linkin Park live at Belgium’s Rock Werchter festival. At the time I was struck not just by how boldly they threaded together songs old and new, however different, into this vibrant whole, but by how extraordinary Chester remained as a performer. At one point he stood at the barrier, singing into the weeping faces of people that couldn’t believe how up close and personal they were getting with a hero that seemed just as thrilled by the encounter as they were. Nineteen days later, that hero was dead. Life is short, and often painful, so when a band and their music means that much to people, it’s understandable that you don’t want to let go.

In another world exclusive, Mike Shinoda graces the cover of the next issue of Kerrang!, which will be available in shops from tomorrow (March 21) and can be ordered online now via this link. It also comes with a special art print, hand-drawn by Mike. Check out the cover below.