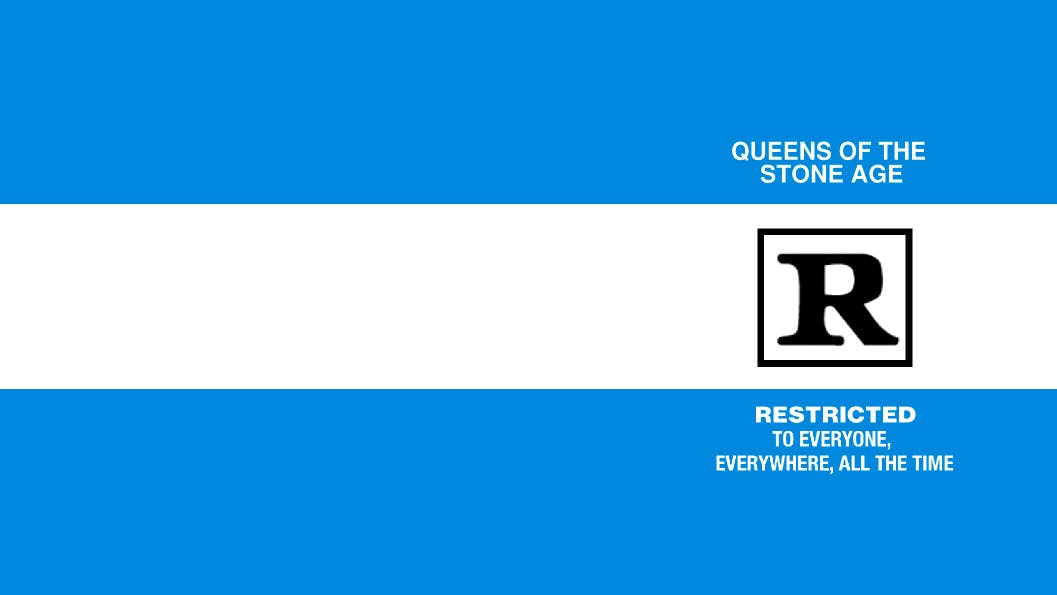 The 1998 eponymous debut from Queens Of The Stone Age was an engaging introductory LP; yet, it retained too much desert rock weirdness, aggression, and grime from founder Josh Homme’s previous project, Kyuss, to make the group a household name. With Rated R, however, all of that changed. Simply put, its expanded arsenal of stylistic shifts and carefree hooks – all housed within cleaner and more refined production – led to QOTSA’s creative and commercial breakthrough. Beyond that, it infused the relatively innocuous and generic landscape of conventional rock music with some much-needed adventure, edge and cool. Subsequent albums may have perfected their recipe, but Rated R laid the groundwork, still remaining a crucial and celebrated compromise between mainstream accessibility and subversive attitudes.

Although some major ’90s bands (Green Day, Radiohead, No Doubt, etc.) retained their idiosyncratic intrigue by the turn of the century, by and large, popular radio was dominated by either glitzy processed pop music or angsty and commercialised alternative/indie rock and post-grunge. In the first few months of the new decade alone, 3 Doors Down, Nickelback, Aqua, *NYSNC, and Mandy Moore released their first or second albums, helping kick off the new millennium as blandly as possible. In contrast, Rated R – released on June 6, 2000 – injected healthy doses of taboo topics, no-fucks-given temperaments, and ambitious genre fusions into the zeitgeist.

Despite being their first album on a major label, Rated R further established QOTSA as the antithesis of a corporately controlled act by allowing Josh to once again assemble his own team of collaborators. The success of the record undoubtedly helped him keep that power as 2002’s even bigger Songs For The Deaf saw the band become a quintet with Dave Grohl on drums.

Former Kyuss bassist and singer Nick Oliveri – who’d stay through to 2004 – began his tenure here, while Josh also brought in Judas Priest’s Rob Halford, Scream’s Peter Stahl, We Fell To Earth’s Wendy Rae Fowler, plus two of his Screaming Trees bandmates: Mark Lanegan (who’d formally join the next year) and Barrett Martin. Also, Chris Goss – who co-produced the record with the frontman – provided some vocals and piano, solidifying how Rated R was made to satisfy QOTSA first and foremost.

On that note, Josh clearly had great ambitions for this sophomore sequence, not only in comparison to its predecessor, but when juxtaposed against the reigning titans of rock music. While he still sang most of the songs, Nick Oliveri and Mark Lanegan’s voices also have prominent roles throughout the record, and the aforementioned guests pepper the mix with their distinctive timbres.

In a 2013 interview with Spin, Josh noted that virtually no other rock band used “three singers”, adding, “I was thinking about what it would be like if the singing was interwoven, like you’re singing lead, then you’re singing harmonies, then you’re barely singing – just seamless transition all the time. It was about… trying to create something that nobody was doing.” Indeed, that varied and fun unpredictability is a major reason for why Rated R was a breath of fresh air.

Likewise, the album isn’t afraid to mix and match seemingly disparate tones and personalities in ways that showcase both significant advancement from QOTSA’s debut, and a defiance of the tropes their more popular peers were embodying.

“We wanted to… [have] a lot of dynamic range. We wanted it set up in this band so we could play anything. If anyone has a good song, regardless of style, we should be able to play it,” Josh told The Fade in 2001. Sure, other rock bands would feature, say, hostile electric songs alongside heartfelt soft ones; however, few, if any, dared to disseminate such triumphantly controversial lawlessness and sleekly soothing odes into a wide-ranging array of forms (such as metal with equal parts folk, blues and acid rock). In that same Spin discussion, Josh admits, “I’ve always had a sick sense of humour and I’ve always wanted that to permeate the music.” That perspective is felt clearly throughout Rated R, too, defying the self-serious nature that many rock groups conveyed back then.

Take, for example, opener Feel Good Hit Of The Summer, a razor-sharp, arid, and morally ambiguous party anthem whose title and repetitiously drug-fuelled lyrics initially drew ire from several radio stations and retailers. Later, Auto Pilot and Better Living Through Chemistry are strikingly leisurely, trippy, and seductive as they continue the theme of substance abuse with lines like, 'Saw you lying there on the marble slab / It’d be the best trip that I ever had / Higher than a jet plane, pass it around,' and, 'The blue pill opens your eyes… a new religion’s prescribed,' respectively. Conversely, Quick And To The Pointless is wholly animalistic, which makes the stark switch to Lightning Song – a peacefully tribal acoustic precursor to Song For The Deaf’s Mosquito Song – even better. As for closer I Think I Lost My Headache, its title ties back to Tension Headache while housing more innovations in its irregular rhythms and carnivalistic concluding horns.

Clearly, QOTSA created something special, as Rated R was a commercial and critical hit. It rose to #16 on Billboard’s Top Heatseekers album chart, and its first single, The Lost Art Of Keeping A Secret (a perfect merger between radio-friendly invitingness and characteristic mystique), quickly became their biggest song.

Over two decades later, Rated R remains a captivatingly transitional statement that helped bring desert rock – with all of its multifaceted aesthetics and risqué exuberances – into the limelight. It harkened back to Josh Homme’s musical history while paving the way for where QOTSA would go next, and it dared to prove that a rock band can sell a lot without selling out.