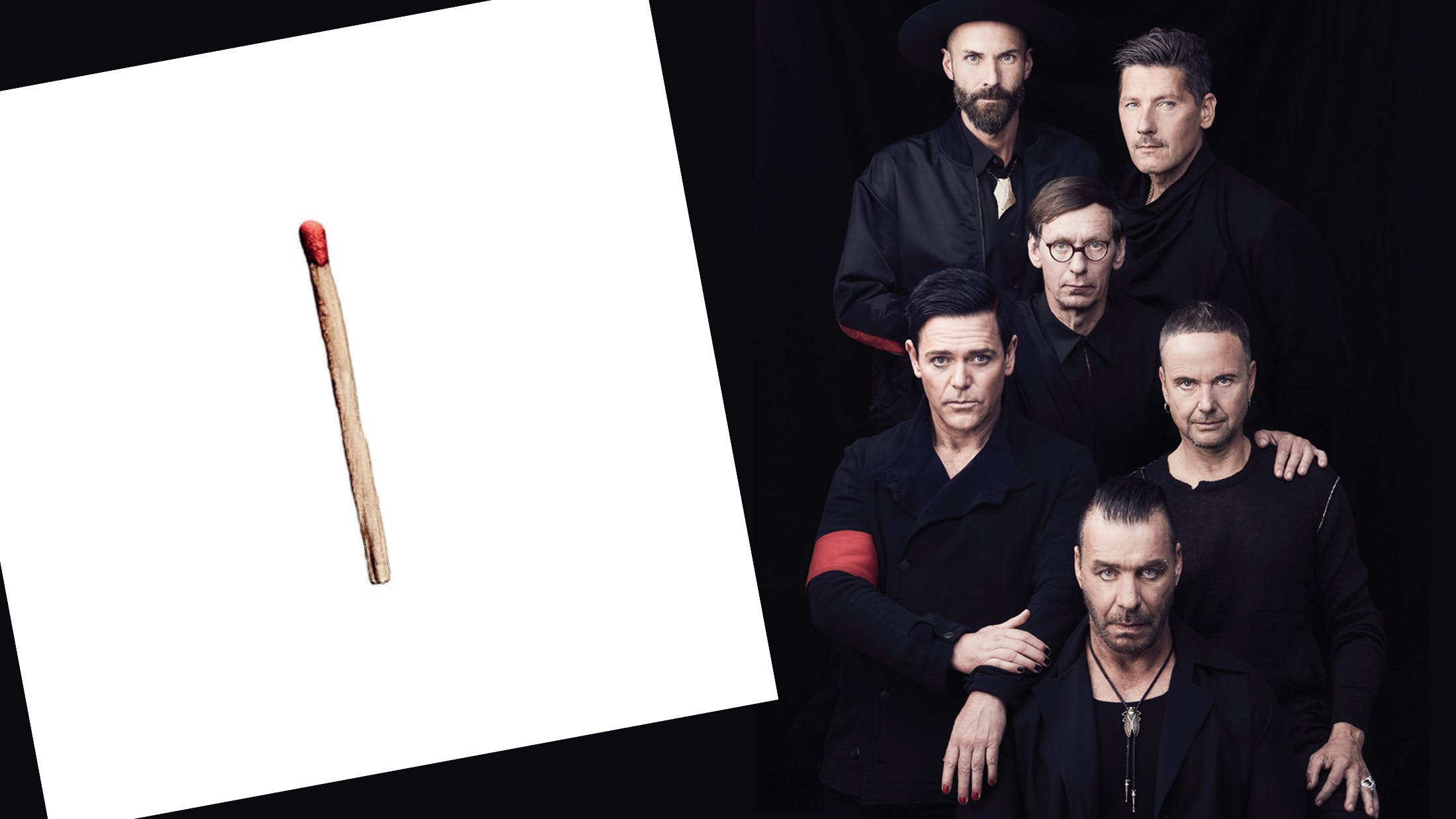 A single unlit match rests against a plain white backdrop. Straightforward, striking and utterly inflammatory, it is difficult to conceive an image that more succinctly sums up what makes German metal overlords Rammstein so great.

Beyond its already iconic, economic cover art, however, the Berlin sextet’s magnificent seventh album feels like a heartfelt distillation of their defining qualities: the sex, the subversion, the need to provoke a visceral response. They might not be the type of men to talk too much when nothing needs to be said, but a decade down the line from 2009’s Liebe ist für alle da, this was the relief valve on 10 years of backed-up, boiled-down brilliance.

Fittingly, things began with a tease. Cryptic clips began to appear online indicating that March 28 would mark some sort of return. When the date arrived, they dropped lead-single Deutschland, a towering techno-metal masterpiece complete with an epic Specter Berlin-directed 10-minute video that saw the band traversing Germany’s shifting eras, racked up 20 million views in four days and immediately courted controversy for the apparently disrespectful incorporation of Nazi and concentration camp imagery. In reality, it was a stinging rebuke of fascism and the gentler, more insidious strains of neo-nationalism that plague Europe today. The subversion of discarded national anthem Das Lied Der Deutschen in the lyric ‘Deutschland, Deutschland über allen’ sees them re-cast national pride as a darkness clouding out the many progressive achievements of modern Germany. Ultimately, the song comes across as a darker, closer-to-home counterpart to 2004 hit Amerika, with sharper barbs and more subtle humour.

Not that any of this was unpacked by the band themselves. Beyond a short chat with guitarist Richard Z. Kruspe last year, there was very little to go on. “Somehow [we’ve] managed to come together and bring a lot of respect back to the work we do,“ he said. “It almost feels like how we worked together during those early years.” Beyond this, they were satisfied that the music would do the talking. The record wasn’t even granted a name – though its self-evident desire to harness that essence of 25 years of existence supports an alternate reading of this as their self-titled opus.

Accordingly, there are untold depths within, of intimacy and absurdity. Second single Radio is a tribute by frontman Till Lindemann to the airwave-smuggled sounds that opened his mind as a youth in communist East Germany. Ausländer brings us bang up-to-date, casting the singer as an international lothario while keyboardist Christian ‘Flake’ Lorenz layers on the Euro-pop.

Ever the provocateurs, the imagery inevitably spirals into the horrific. Puppe, for example, pushes the luridity and darkness of the band’s nightmarish side, revolving around the first-person narrative of a younger sibling locked in a cage with a doll while his prostitute sister works – and, subsequently, is brutally murdered – in the room next door. Regardless of the content, of course, Till’s delivery (alternating between heavy breathing, panicked shouts and hysterical hollering) lends an unnerving edge to it all.

For fans, there was much to read into here. Some saw a concept album about the abused becoming the abuser, while lighter hearts found 11 tracks of dancefloor-ready bangers overloaded with the humour and boundary-pushing excesses of the band’s imagery and aesthetic. Everyone, however, made out the machine-tooled purpose at play. Polished, precise and unapologetically unbending, the album feels almost like a Germanic cliché.

READ THIS: Rammstein's most X-rated moments

Leaving behind long-time producer Jacob Hellner, the album was recorded by the band’s live sound engineer Olsen Involtini (also of guitarist Richard Kruspe’s side-project Emigrate). As such, there is a tangible desire to exercise maximum control, drawing the recorded experience in line with their trademark like shows – and vice versa.

The signs had been there. With every release, Rammstein had constructed an irresistible back-catalogue and tantalising mythos (Snow White spanking the Seven Dwarves! Apocalyptic pyro!). And despite their press-shy approach and those unapologetic sounds from the lunatic fringe, this marked the band’s blitzkrieg incursion on the mainstream. That they managed it without sacrificing an ounce of their integrity or intensity speaks volumes. In Germany, the album delivered the best first week sales for any album this century, while also crashing the UK and U.S. Top 10s. For Rammstein, absolute uncompromise yields absolute victory.

As always, the live show was the ultimate realisation of this. Scheduling a 33-date European tour (almost all in stadia) throughout the summer, they constructed a towering new production – as wondrous as the Wizard Of Oz, as industrially intimidating as the Tower Of Isengard – that matched both the ambition and provocation of the new music, with old favourites like the penis canon sitting alongside ridiculously huge pyro and enough billowing smoke to blot out the summer sun. It was a set-up so massive that it had to be duplicated to allow time to set it up for gigs three days apart. The 30,000 people who crammed into Milton Keynes’ MK Stadium for the tour’s sole UK date on July 6 were treated to this unique spectacle, while the truly mammoth shows in their homeland – including appearances in the Berlin and Munich Olympic Stadiums – were simply gargantuan.

There is, though, a sense of cumulation about the album’s music and imagery, a growing feeling of finality that rings true with whisperings that this just might be the band’s final statement. The Neue Deutsche Härte (New German Hardness) which Rammstein defined is growing old. If this is to be a last hurrah, however, it arrives with the same sense of precise perfection with which this band have always carried out their business, ticking along like atomic clockwork. And this has always been an outfit about quality over quantity. All menace, no meander. There is frivolity, grotesquerie and no small amount of obscenity at play amongst these songs, but not once are those qualities deployed without being underwritten with generous helpings of self-awareness, wit and intelligence, done with heads held high and eyebrows just a little singed.

It’s confirmed! Rammstein’s brand-new album Zeit drops on April 29. There’s a new video too, and Bryan Adams (yes, him) did their new photos…